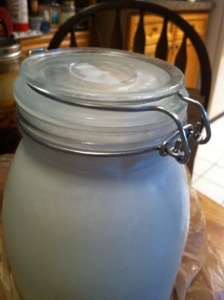 I roughly followed the recipe from last time. We were limited by our almonds so we just made about 1.5 times the recipe. We mixed the almonds and (brown) rice. We put in half of soaking water into that bowl. For the other half, we heated it and added the sugar (about 1 cup even though we were increasing the recipe). We also put one cinnamon stick in the hot water. Doing this separately was to dissolve the sugar. We then mixed it all together and let it sit.

We blended it, strained it, and added water. We also added a tiny bit of almond milk since we wanted to have more.

It came out tasting pretty good. Nice amount of sweetness and a strong cinnamon flavor