Meredith made the Hatch Chile Breakfast Casserole from The Kitchen (Local Copy 1). She used fresh roasted green chiles. Her other changes were:

I also made yuca home fries. When I had them on 2016-08-15 I really liked them so I tried to make them for everyone. I followed this recipe and tried to roast them. The parboiling worked fine but I roasted them for too long. Some were burned and others were just cooked a bit too much (but crispy!). I just felt like the flavor of the yuca wasn't there. Maybe next time I will just roast them and for less.

Sadly, I forgot to take a picture. But it was all very good. We will do the casserole again.

I made my regular huevos for my dad and Peter. It was just the eggs and the sauces. The only real difference is that I made it Cristmas style. I used 505 brand Green Chiles and Tio Franks Hot Red Sauce.

I really liked it with the sauces on there. Spicy but good! 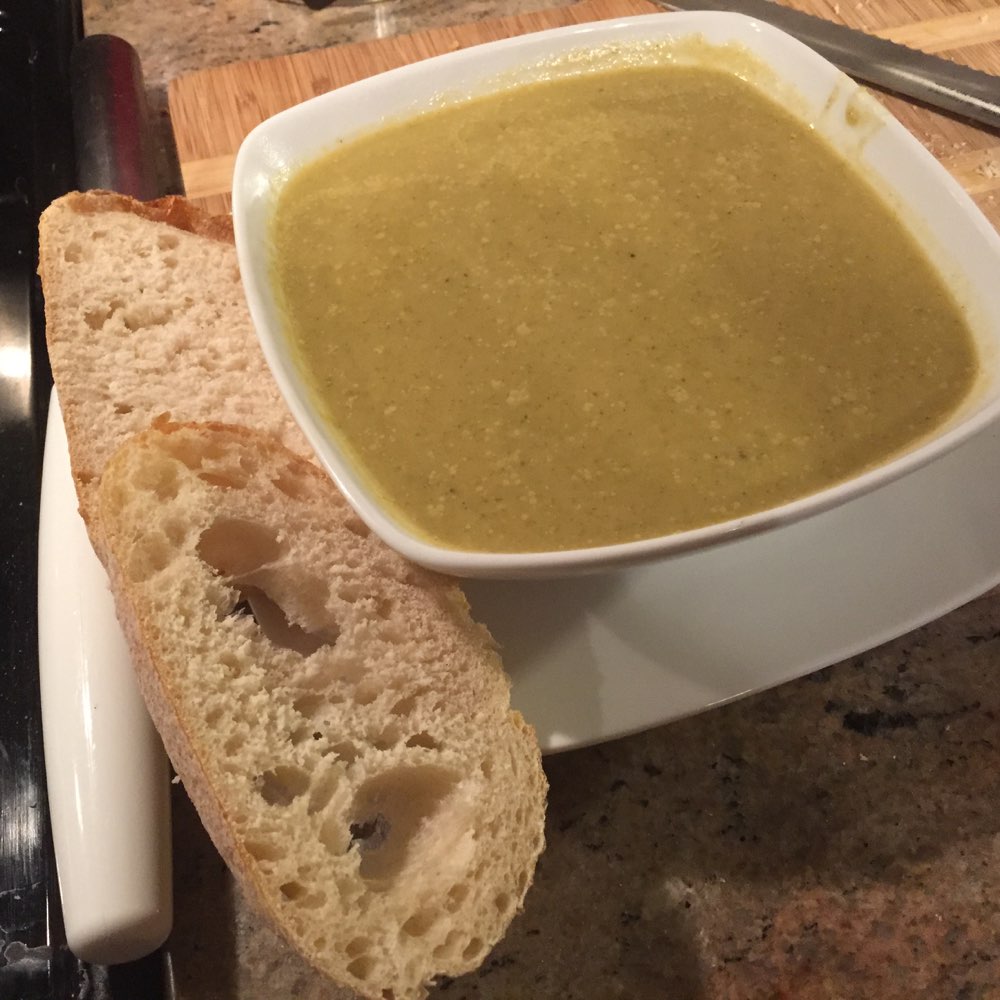 We wanted a light meal so we made our Roasted Broccoli Soup. We made a very large batch. We also added some Worcestershire and soy sauce to add some umami. 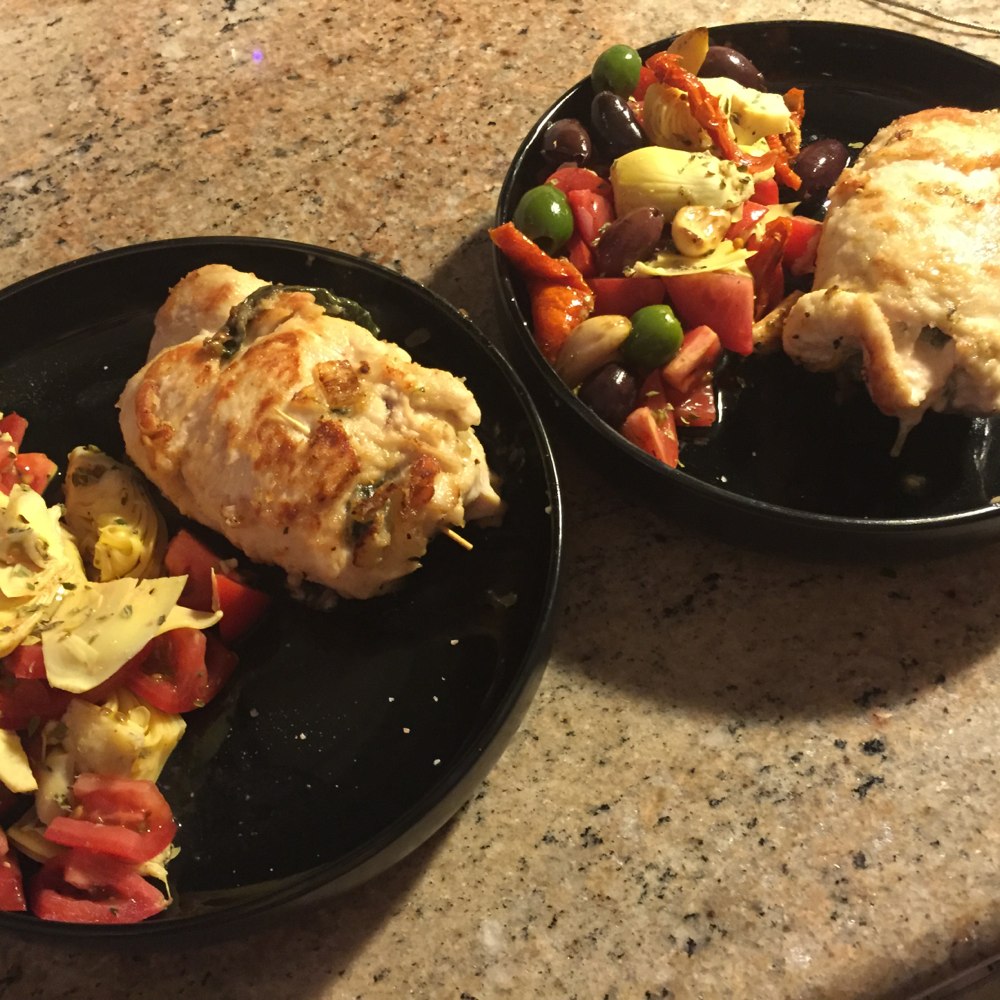 Meredith and I made a really good meal. I had suggested a stuffed chicken of some kind and Meredith suggested a greek-spinach type stuffing.

I read a few things on how to prep it but there was a lot of mixed methods. I attempted to mostly-butterfly the chicken and then pound it out. Sadly, the cut was too deep on the first one. But the other was fine and I pounded it out pretty well.

We started by sautéing onions with some salt, dill, and oregano. Once they were ready, we wilted down some spinach. We added more of the seasonings then a bunch of chopped up lite feta. Afterward, we deglazed with white wine. As that simmered down, I added a tiny bit of half-and half. I let that cook down for a few minutes.

After we stuffed the chicken, we dredged it in flour. Again, different recipes suggested different ideas, but I decided to cook it on the stovetop for 2 minutes, flipped it for another minute. Then added a bit of white wine and put the whole pan right in the oven at 350. We tested it every once in a while until we felt it was cooked, about 15 minutes.

Meredith also made a tomato-artichoke salad. She mixed a diced tomato with artichoke hearts and seasoned it with salt, pepper, oregano, and red-wine vinegar. She also served hers with olives.

I really liked the chicken. There was a nice creaminess from the tiny bit of half-and-half. The chicken was cooked well (enough) and the flavors were pretty spot on. I need to work on cutting and flattening and stuffing chicken but I'll get better at it. 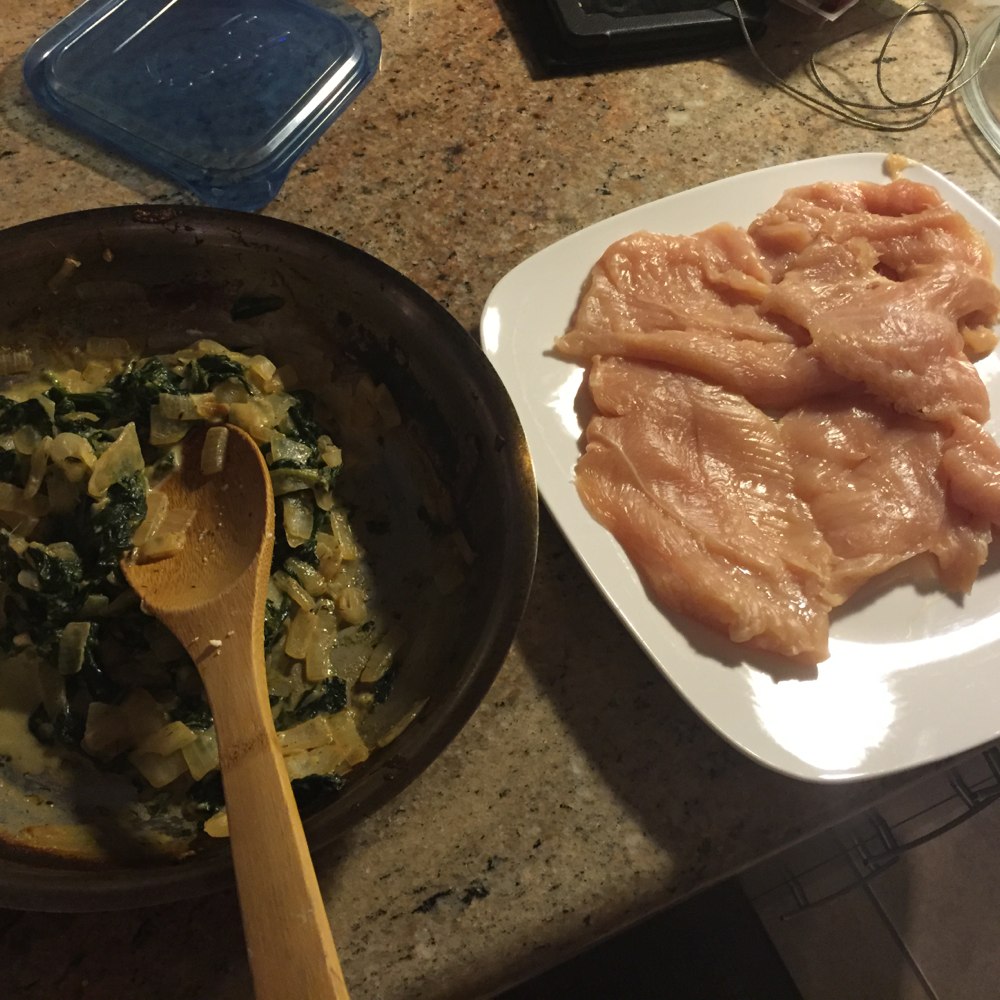 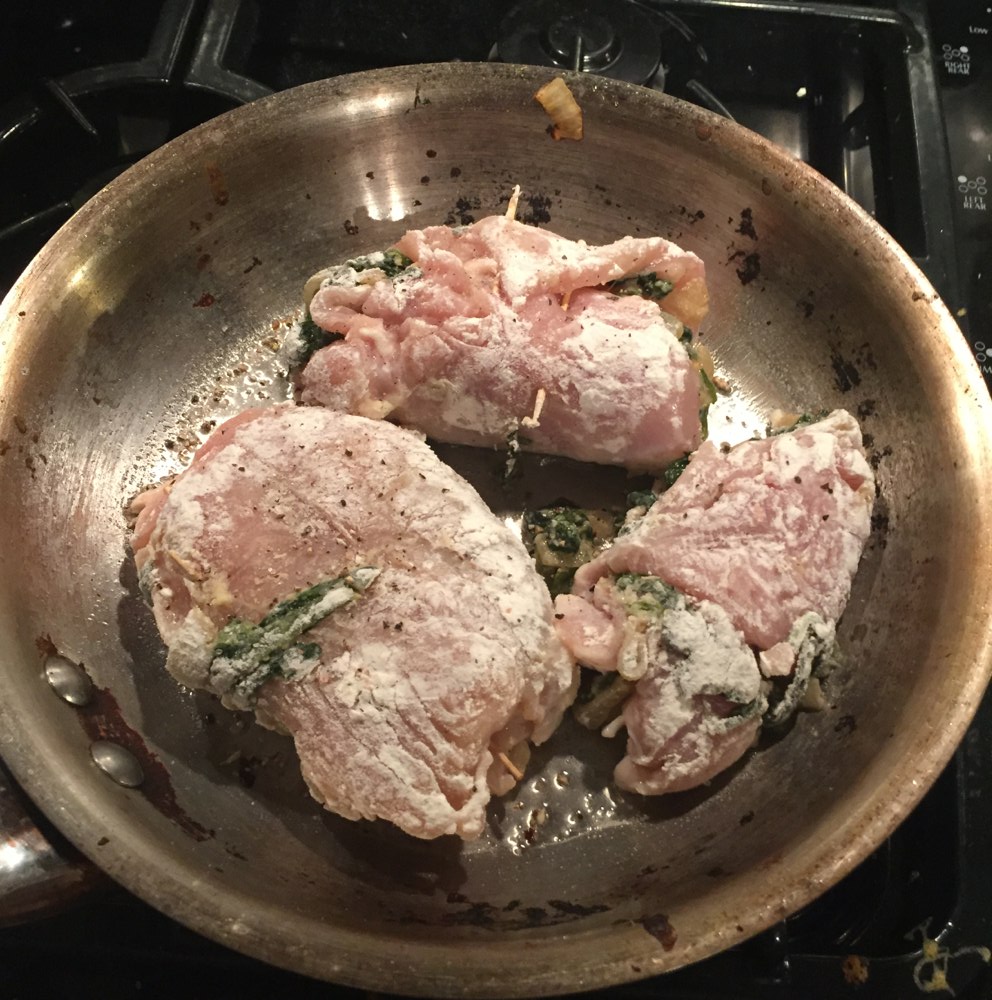 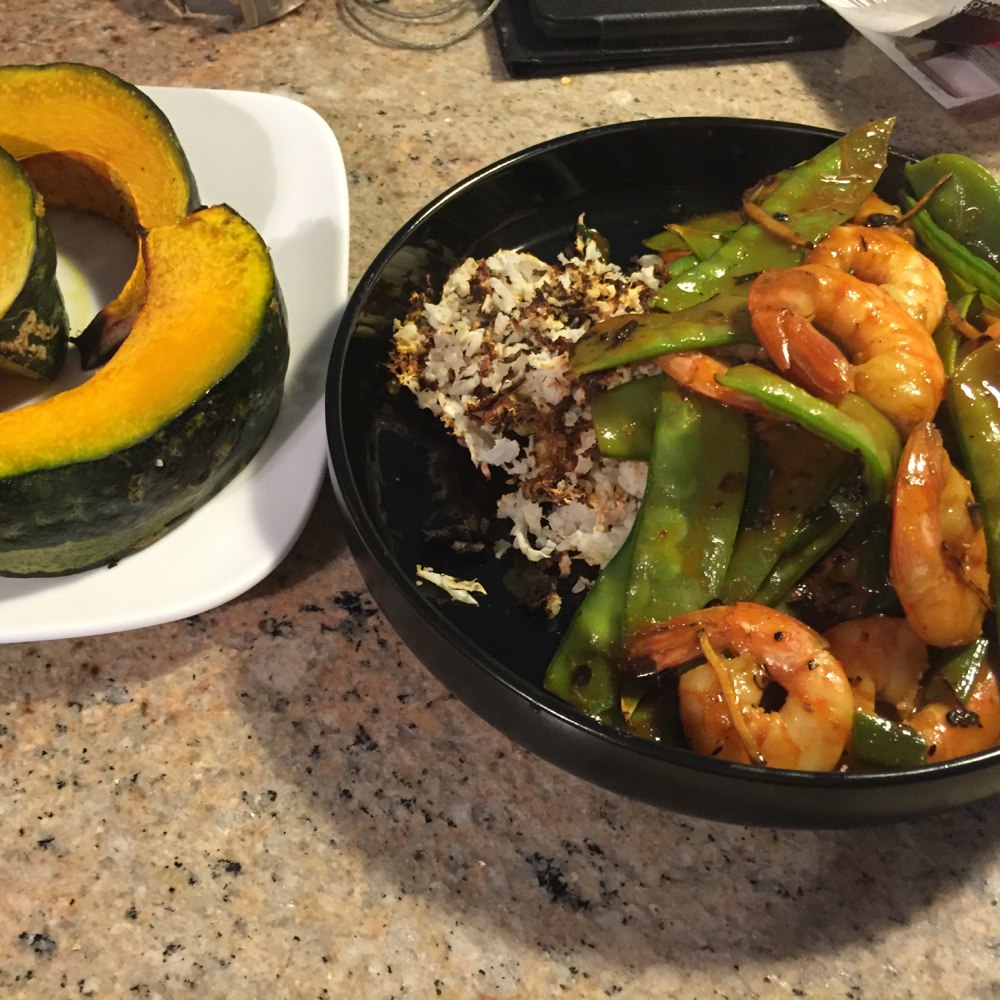 We made our pretty regular snow pea stir-fry. We used cooked shrimp by accident but other than that, it was pretty good. The pan was very hot so we had to move fast but that wasn't too bad.

We also made cauliflower rice (though I overcooked it a bit). And I had some kabocha squash 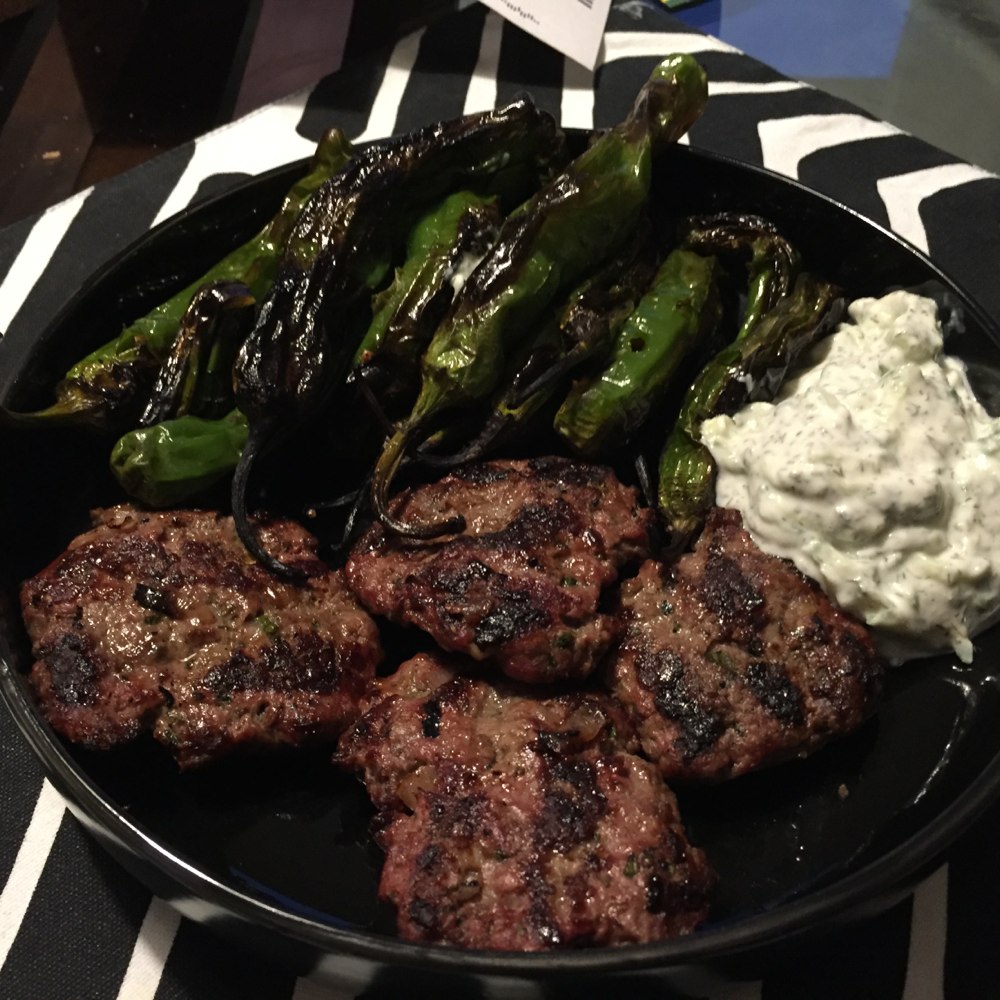 Pretty simple meal. I made the usual kofta (except I used shallots instead of onions). I had planned to kind of kebob it and then grill it but I couldn't get it to stick to the kebob skewered so I just made it into patties. I do not now if it was my technique and/or the skewers but I need to do more research into this.

I also make shishitos on the grill. They were on the brink of going bad and I already had to throw a few out but I think the ones I kept were fine (enough)

Meredith made tzatziki for both the koftas and the peppers 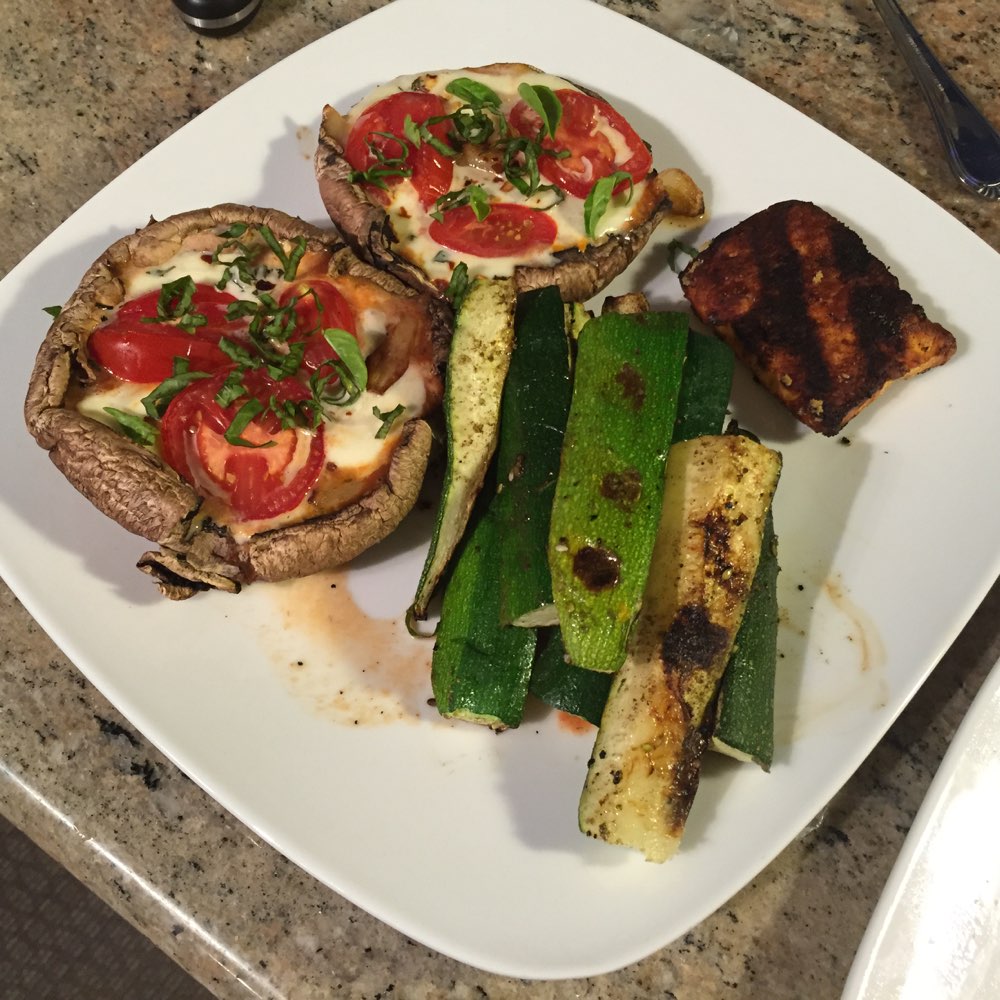 We weren't very hungry so we kind of made a bunch of sides and no real meal.

We made grilled pizza mushrooms using the Delallo Vodka sauce, plus some mozzarella cheese, fresh tomatoes, and crushed red pepper. And then we added some fresh basil afterwards.

We also grilled some halloumi (with a bit of cumin and garlic powder). And finally some zucchini with some z'atar and salt.

I think the zucchini (and maybe the mushrooms) could have used more time and the halloumi a little less. It may have also been the way we cut the zucchini or simple that it needed more time.

I think I need to play with my timing a bit more on the grill. Maybe next time1 I will do the halloumi on the upper shelf and/or for less time. I am not really sure how best to do the mushrooms. They were starting to spill over. Maybe too much sauce? 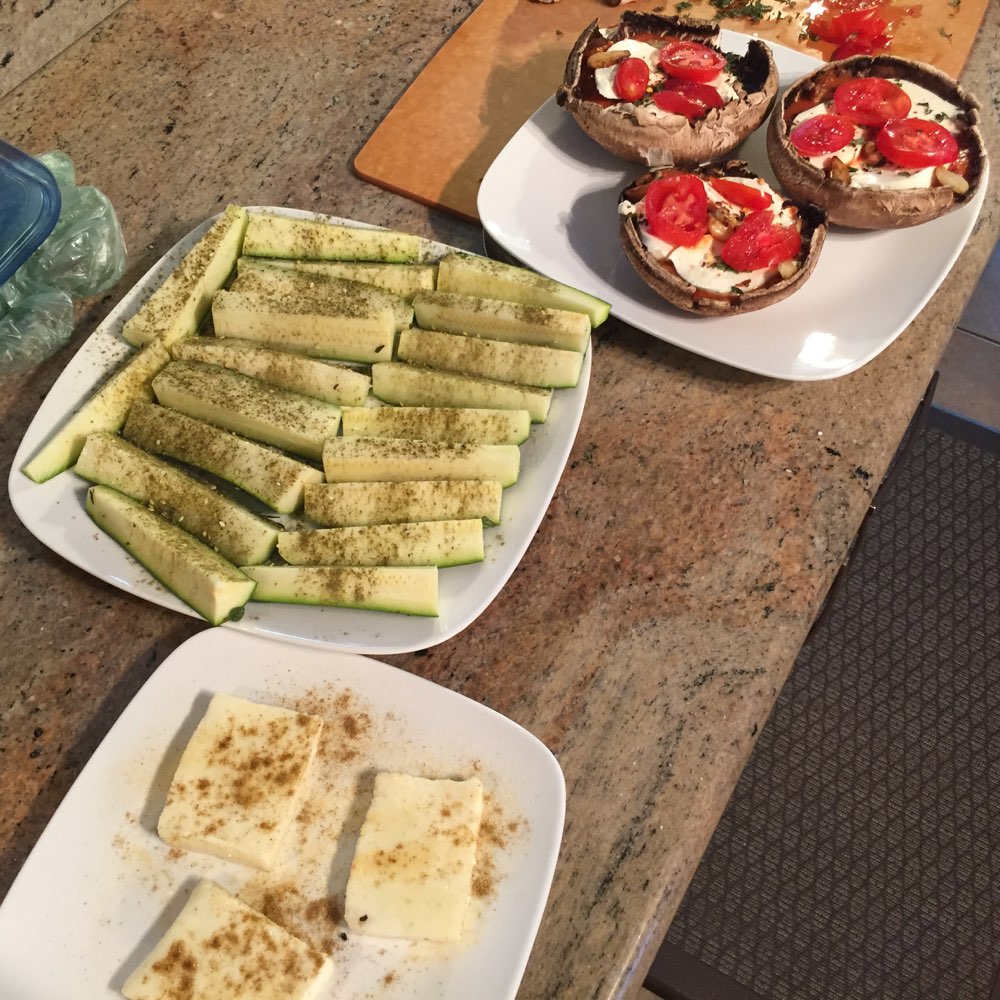 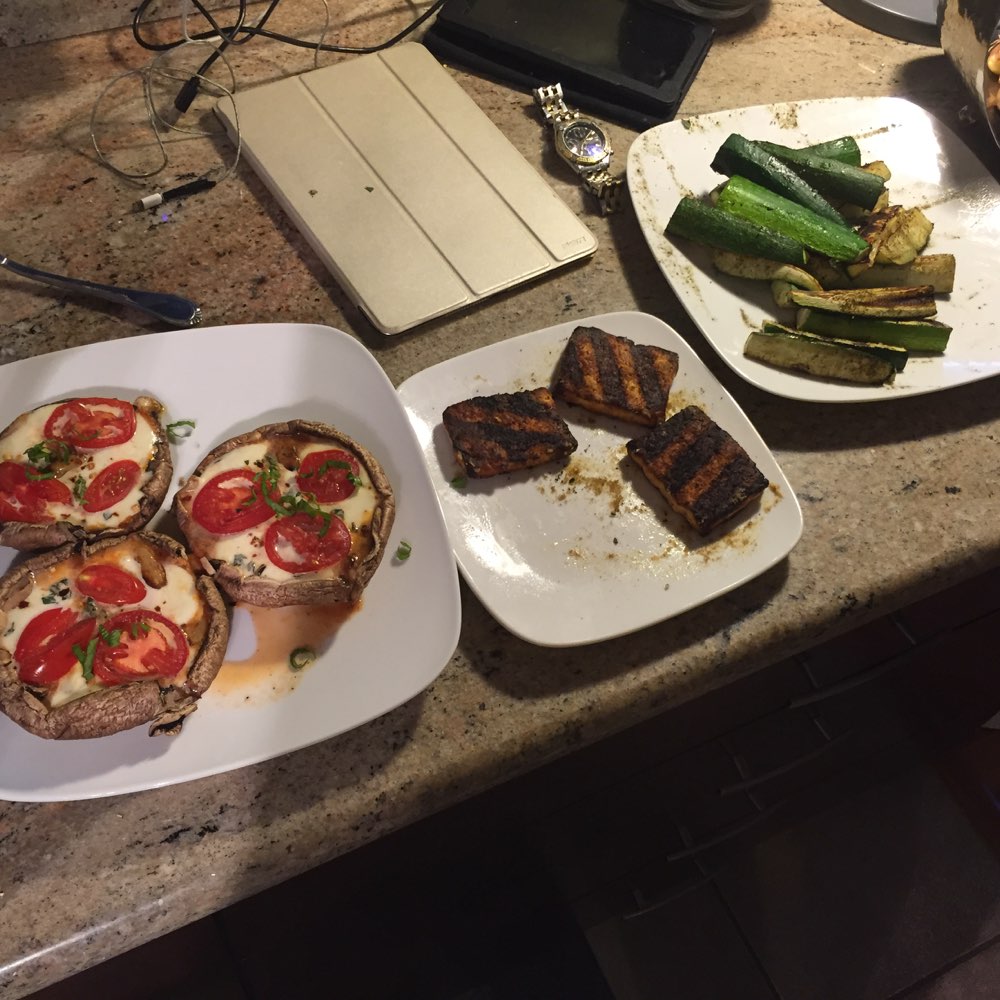 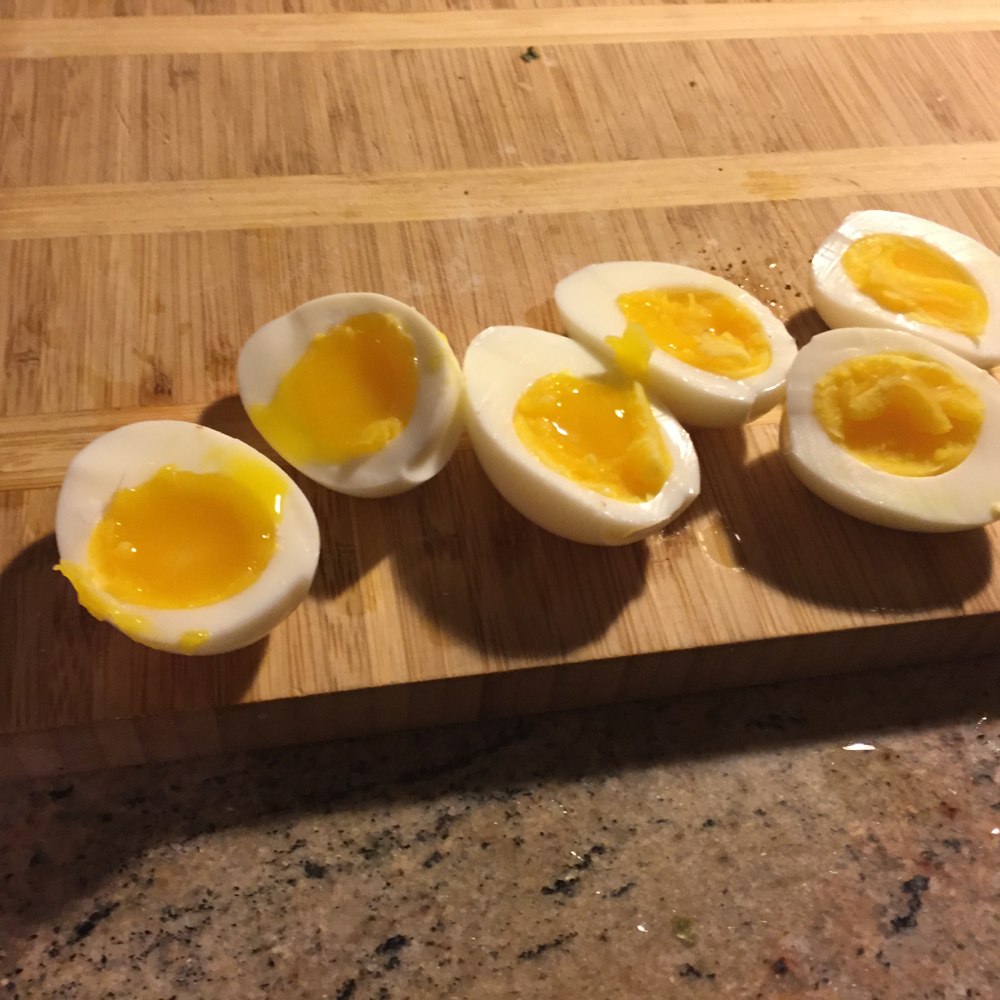 We had kind of a boring dinner of just junky ramen but I wanted to try to make a ramen-style soft-boiled eggs (without any kind of marinade or anything).

I tried to use 3 different times. The only thing to really consider is that the steam may have been less intense at the beginning and also opening the pot may have made a difference (though probably not much). And I am at ~5500 feet. That will affect this for other locations.

I did the times as: 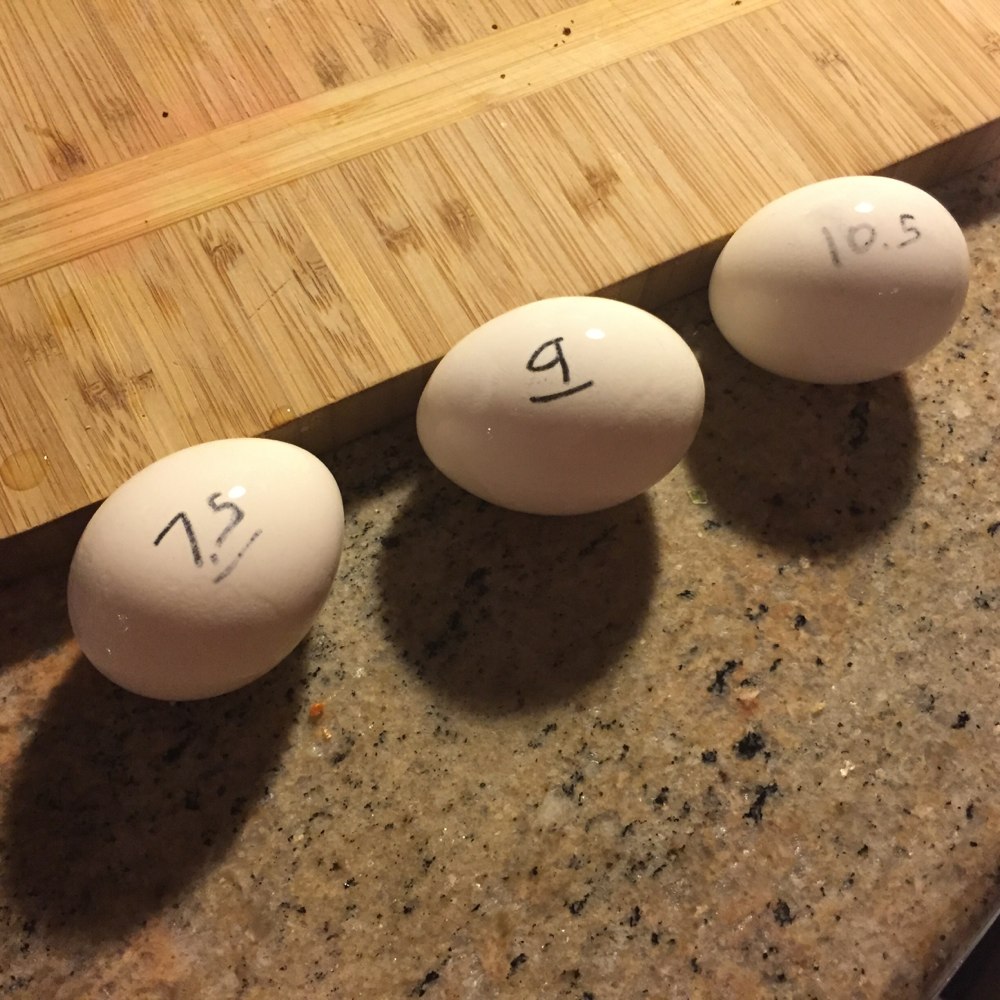 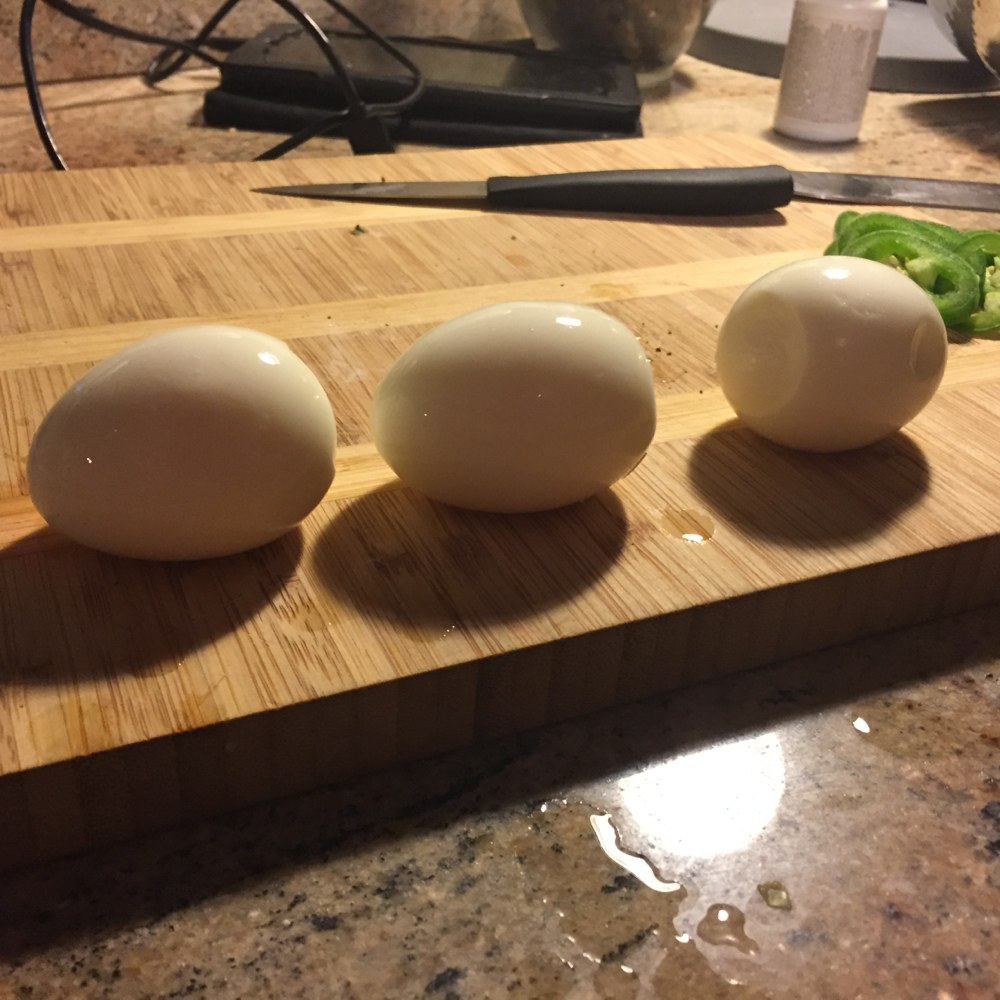 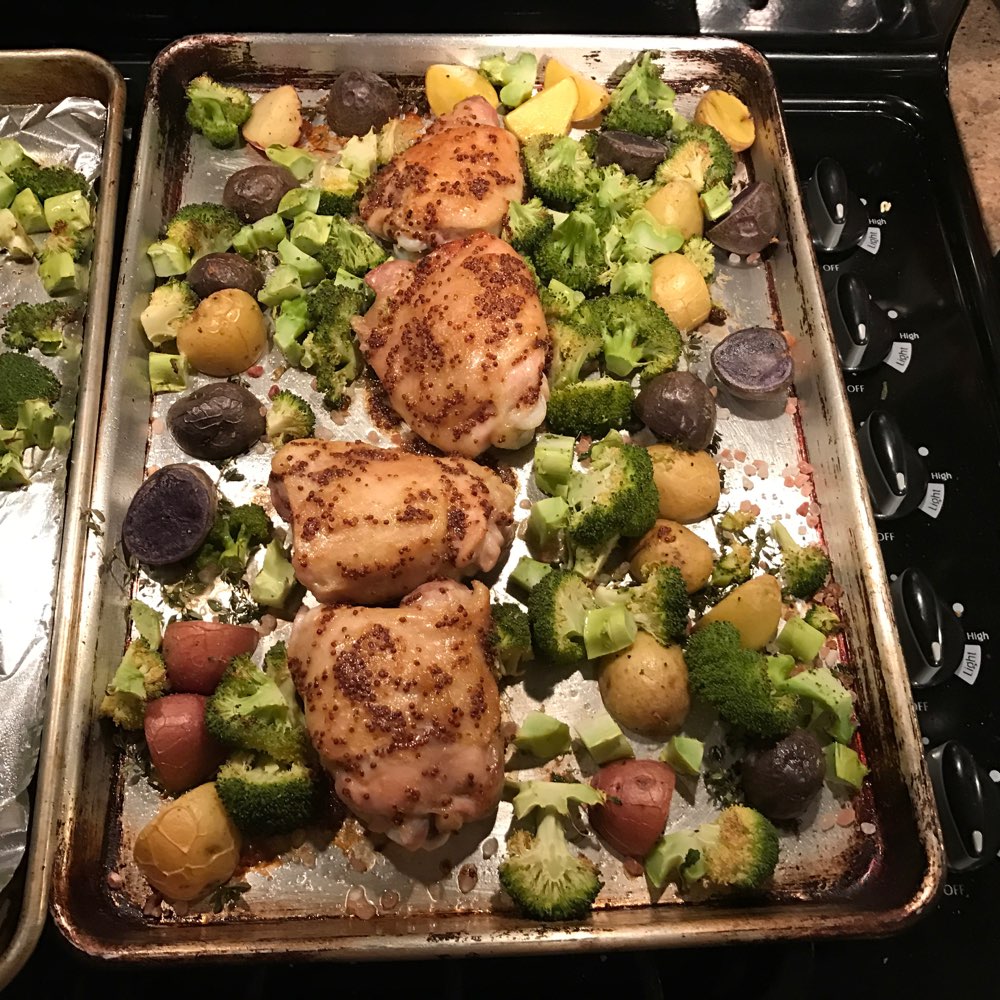 We followed this The Kitchn Recipe (Local Copy 1) to make sheet pan chicken. The idea is pretty simple, you just cook everything in the sheet pan. We even decided to do it with skin-on chicken thighs (though we got ones with bones by accident).

We followed the recipe pretty closely except we also added some fresh (lemon?) thyme from the garden. We heated the pan in the oven as they suggested, and putting the chicken skin-down made quite a sizzle, it still was kind of mushy in the end! And since the skin was kind of mushy, we didn't eat that and therefore really lost all of the flavor.

The vegetables were fine. They didn't get too much more flavor than just salt. I think next time, they could use a bit more oil to get better texture and more flavor. (Though I dumped a thing of unground-salt on them but we were mostly able to avoid it). And we also did extra broccoli on the side.

So next time, I would either do a better treatment of the skin or just use skinless (and boneless). And maybe some more oil and seasoning on the vegetables.

I would also just consider this idea in general with other recipes. 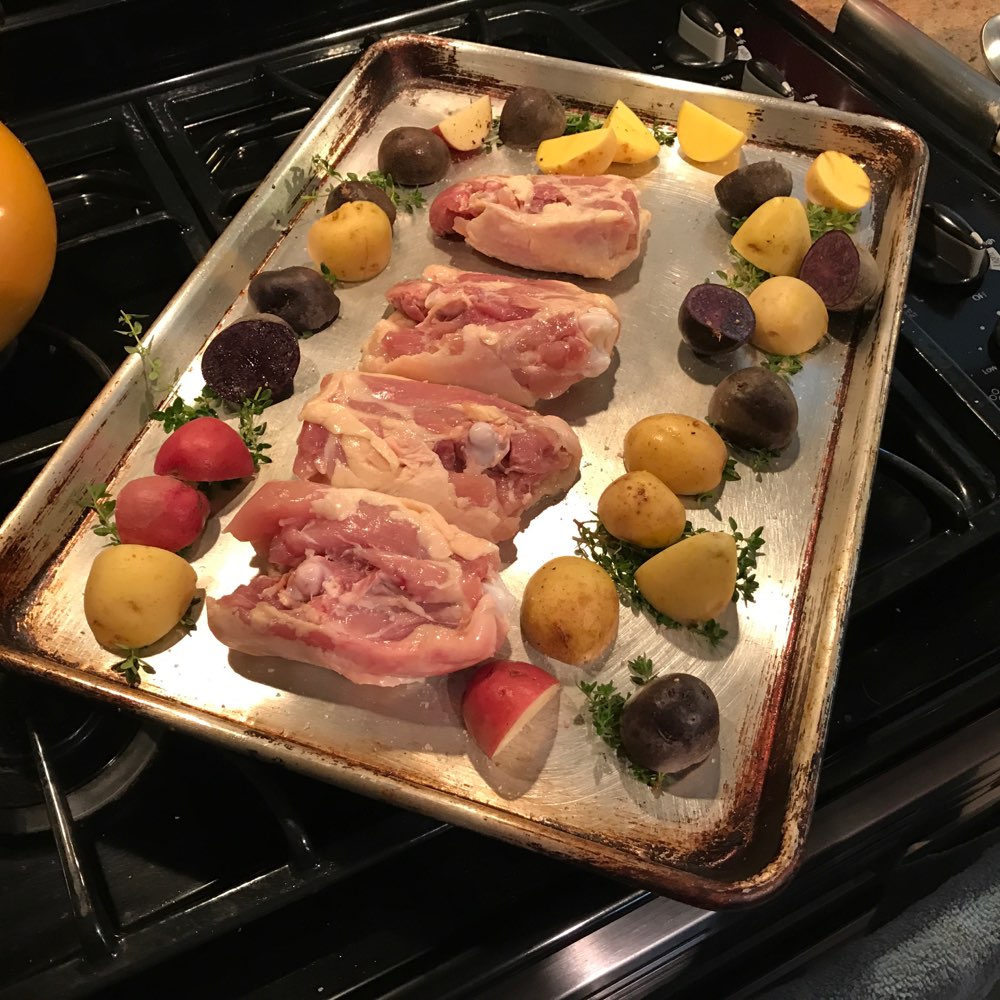 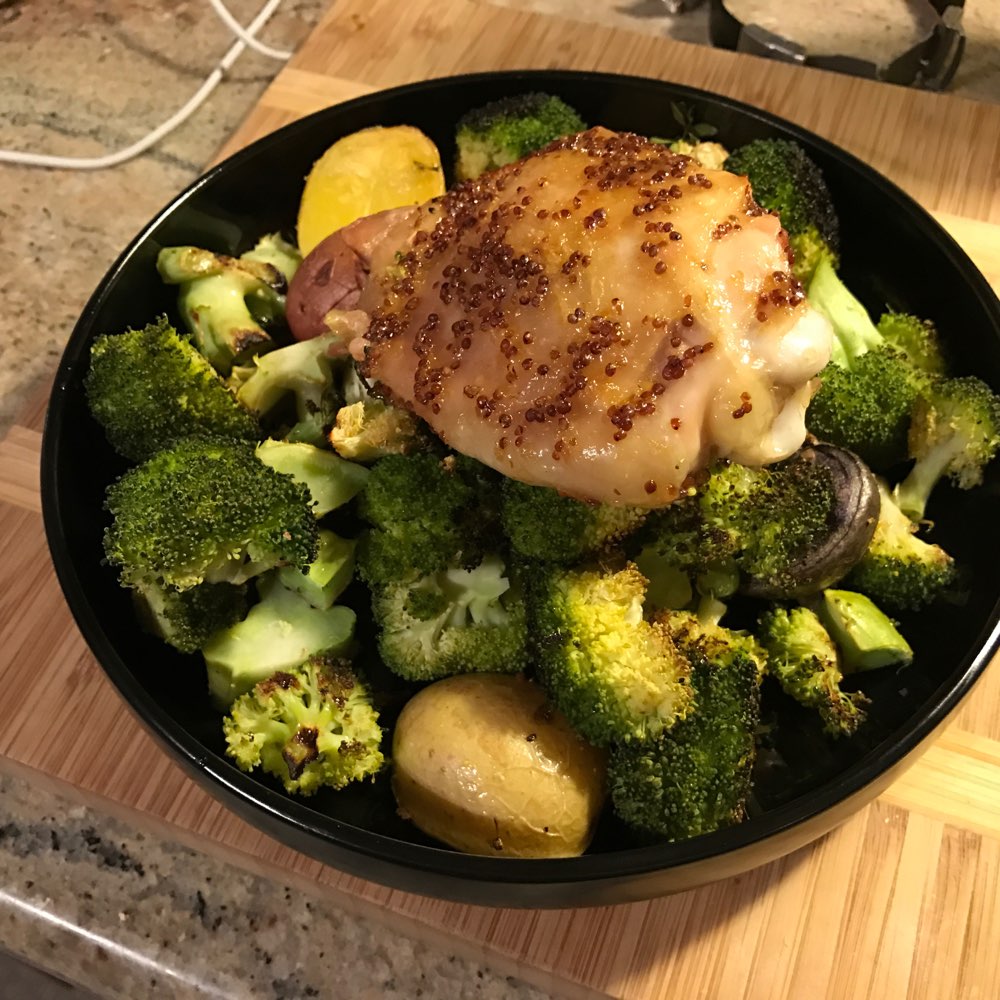 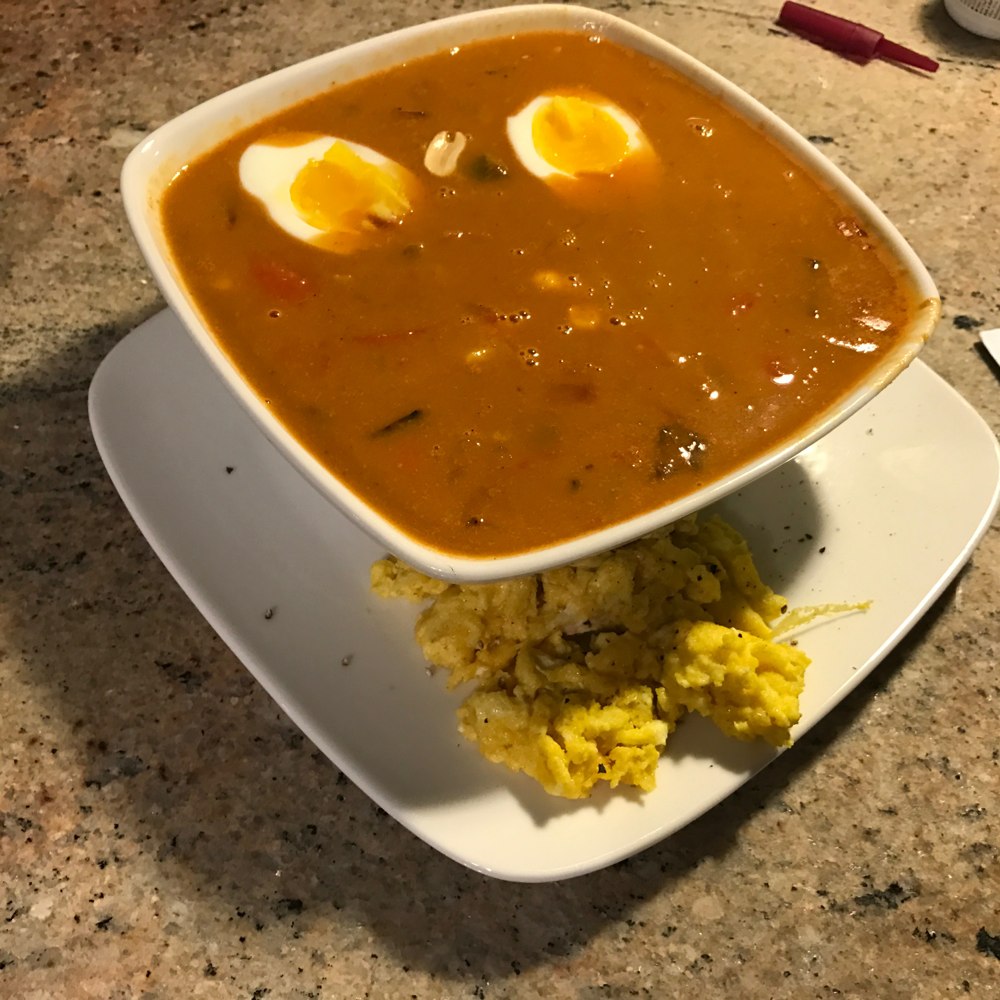 We made African Peanut Soup yesterday and reheated it for dinner today. I used the regular recipe except I went heavy on the vegetables (extra jalapeño and red pepper, plus others) so I also went heavy on the broth.

I also used the powdered ginger, cumin, and cayenne from the recipe. Though I used 1 tsp of cayenne (since adjusted down on the recipe). Anyway, when we tasted it, it was (a) spicy and (b) kind of flavorless.

We played around a bit and added worcestershire, soy sauce, and a bit more Better than Bouillon. That actually worked really well so I added it as an option to the recipe.

It was still too spicy so I added a tsp of sugar when blending some to try to cut it a bit. That worked well enough. We forgot to serve with any greens but that worked ok.

Anyway, we served it today with some scrambled eggs (with a bit of sour cream -- worked okay). I also had two soft-"boiled" (steamed) eggs done for 8.5 minutes which worked perfectly.

I updated the recipe for some of these changes. 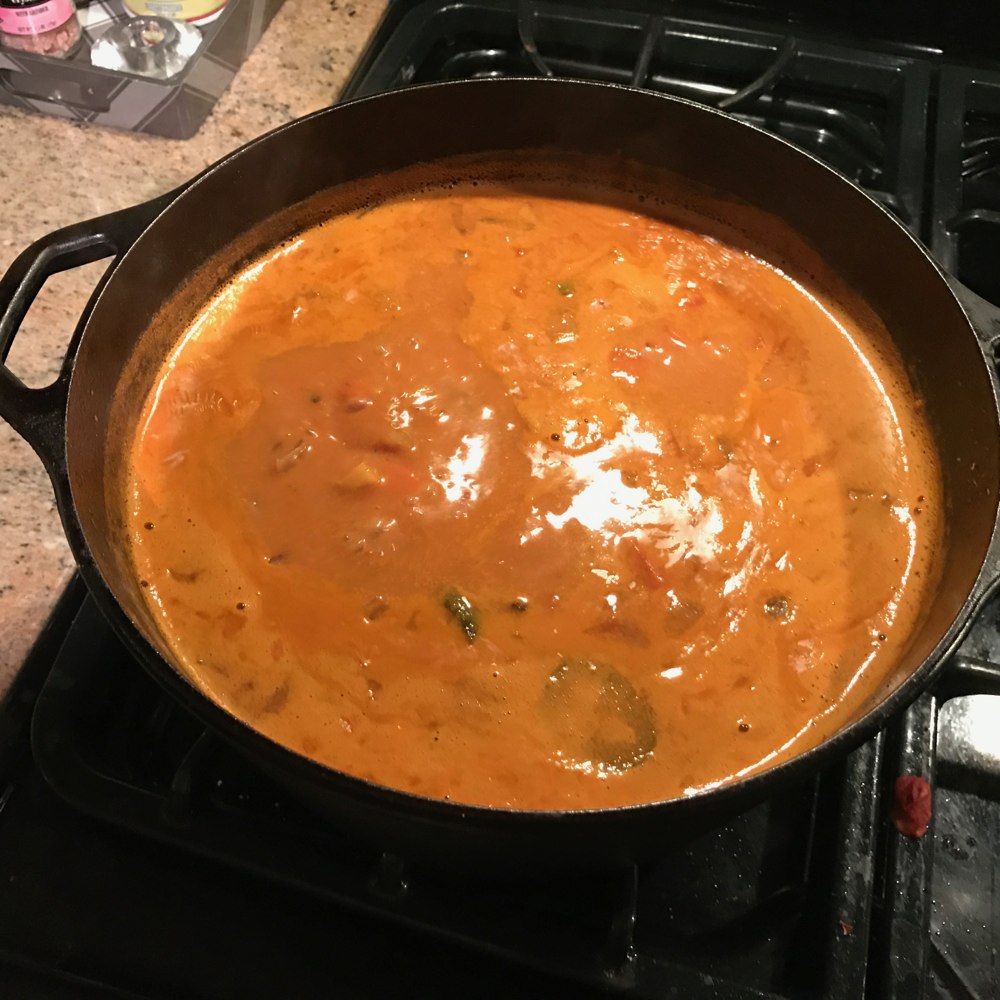 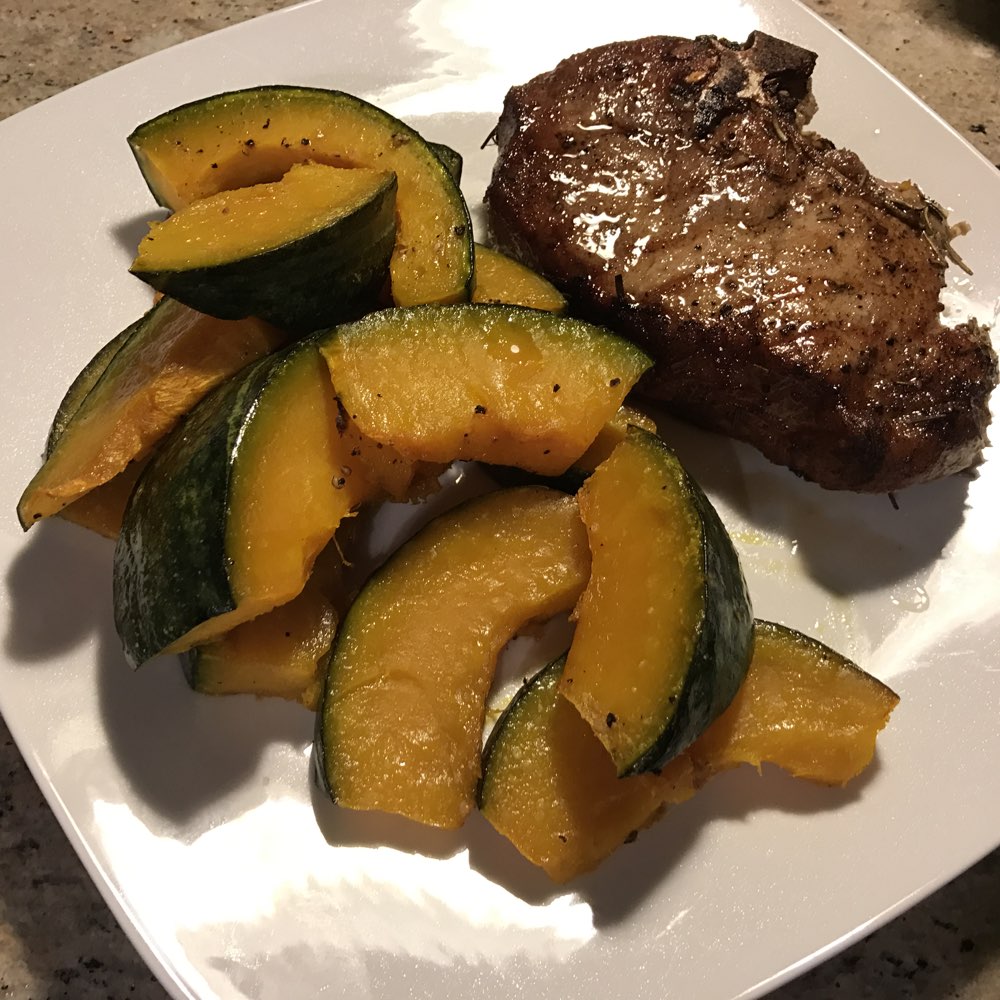 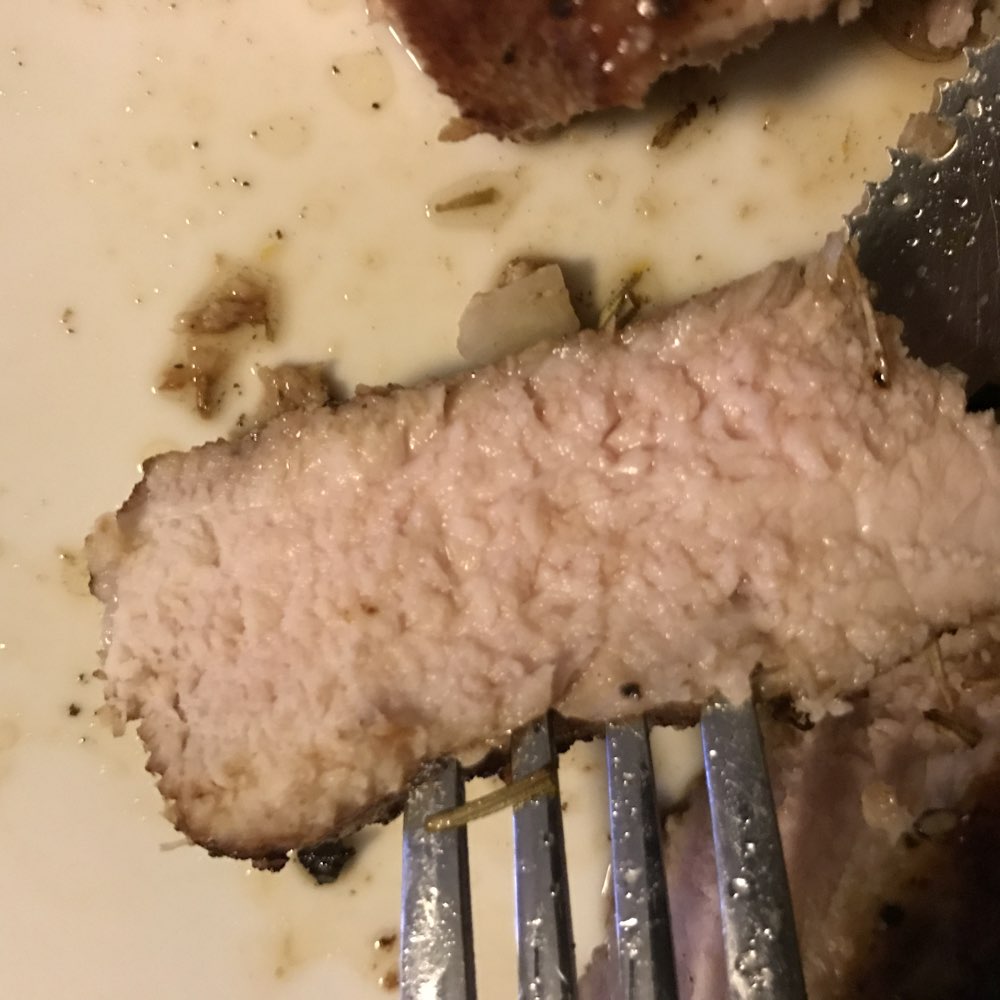 Meredith was out of town so I tried to make something she usually doesn't like: pork chops. I bought a bone-in (rib I think?) pork chop. I followed Serious Eats (Local Copy 1). I used salt and pepper on the pork chops and then I added some diced garlic, rosemary, and a Tbsp of butter to the bag. I did it at 142.5F (In between the table's temps) for about an hour and a half.

I decided to sear it in the grill pan so I needed more oil than usual since it would be below the "grates". I got it super hot with a bit of butter. It was searing pretty nicely, though splattering everywhere. Then I smelled the leftover liquid from the sous vide bag and it smelled amazing. I figured that in addition to following Serious Eats and adding more aromatics after the turn, I would also add the contents from this bag. Big mistake! I didn't think that some of the bag was water (from the pork and also butter is 20% water). Well, that caused the oil to super, super splatter and create a literal FIREBALL in the kitchen. Woah! Thankfully, it extinguished itself before I had to interviene. oops! I'll be more careful next time.

Either way, the pork was cooked really well as you can see from the picture. It was really moist and flavorful, though I did have to work around some fat.
However, will all that, there still were no grill lines!

I also made Kabocha squash (30 min at 400, flipped half way). I tried to cut it smaller but it was still a tight fit on the pan. Good though!