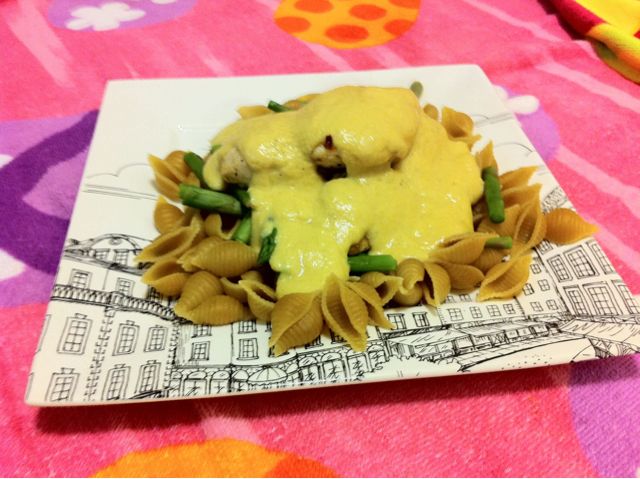 My goal was to cook at Meredith's without buying anything new and this was the end result. The main focus was the "cream" sauce. My original attempt was a bit of skim milk, water, and dry skim milk powder at a much higher concentration. Still getting used to gas, it boiled by accident so I had to try again but this time with just powder and water. I was fairly suscessfull. After mixing the powder and water for a bit over medium-low, I added some whole wheat flour, some grated parmesian and then a lot of dijon mustard. Whisking it made it all come together nicely and I eneded up with a fairly thick sauce. It was a bit gritty but that is to be expected. If I made a "cream" sauce again, I will use evaporated milk, but I didn't want to go and buy it.

The asparagus was cut into pieces and steamed. I sauteed the chicken with just salt and pepper.

The entire sauce as 7 points for the milk powder and 1 for the cheese. There was also some leftover so I will say 3/person. The chicken is 3-4 and the pasta is 3.