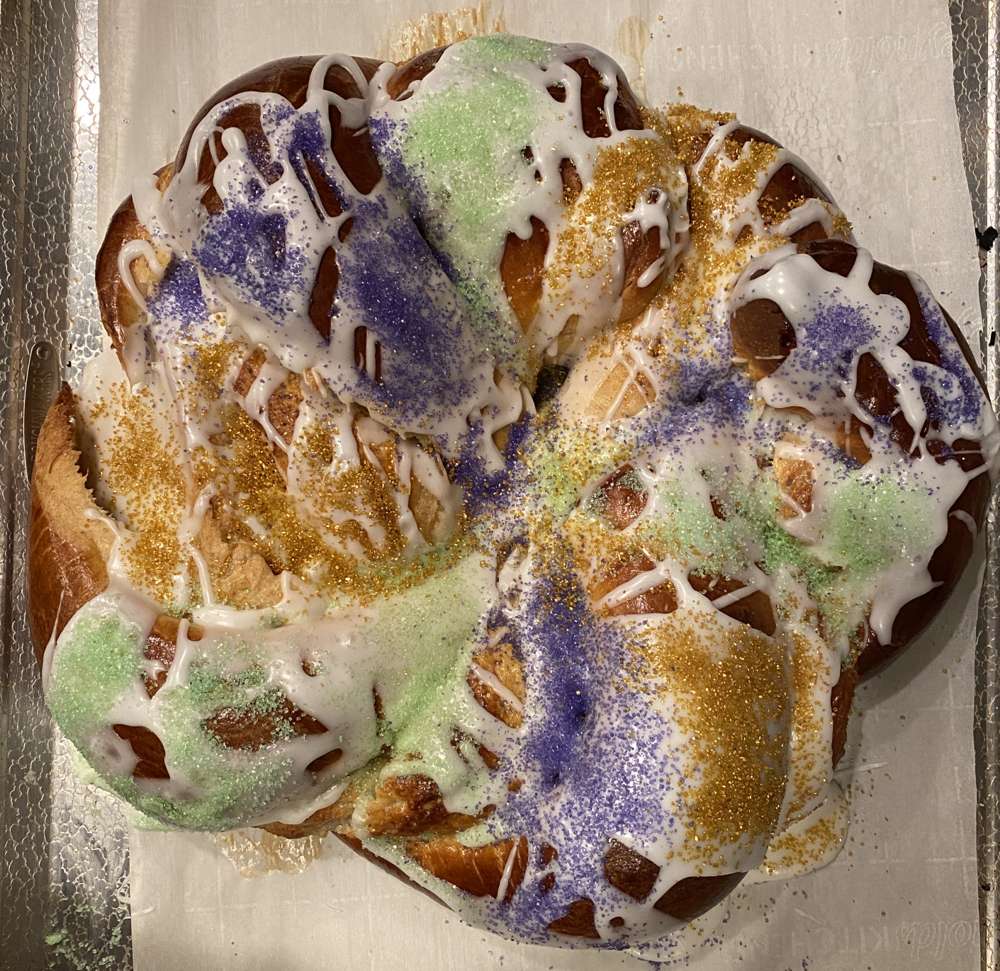 Meredith made an Almond Mardi Gras King Cake using the Joy The Baker recipe used a few times before. She really picked from a few different recipes. The frosting from King Arthur Flour (LOCAL) replacing the vanilla with almond extract. Inspiration for almond paste from Serious Eats1. The only part of that recipe was the filling using

beaten together in the mixer until smooth.

One batch of filling filled one rope of dough, so she ended up making a second batch but had to use marzipan since that’s what we had. Turns out the almond paste mixture spread better than the marzipan one.

It rose slowly but did eventually rise. And she followed her own advice from the sticky buns to use a thermometer. Still, the very, very inside was a bit undercooked but really not very much.

It was very popular. In fact, the entire thing went! 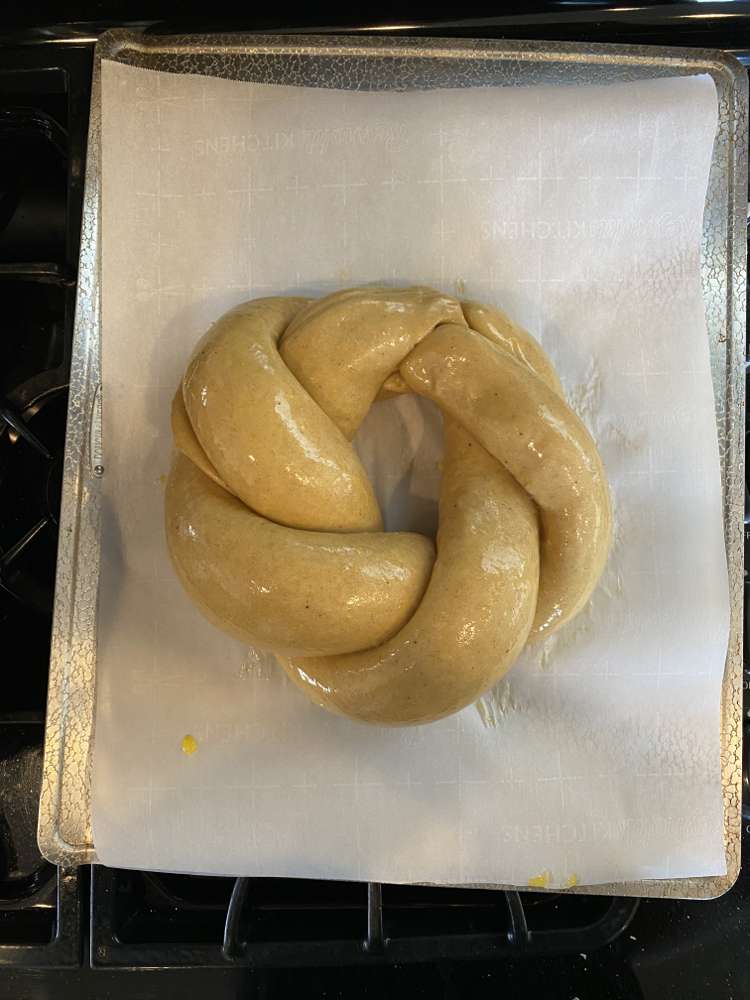 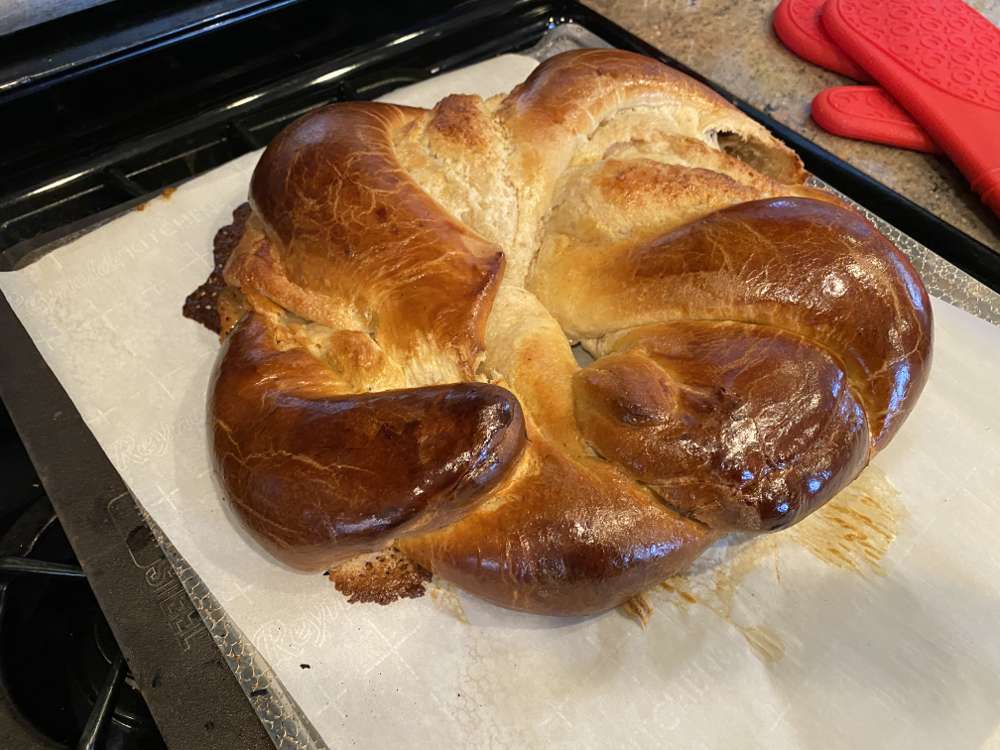 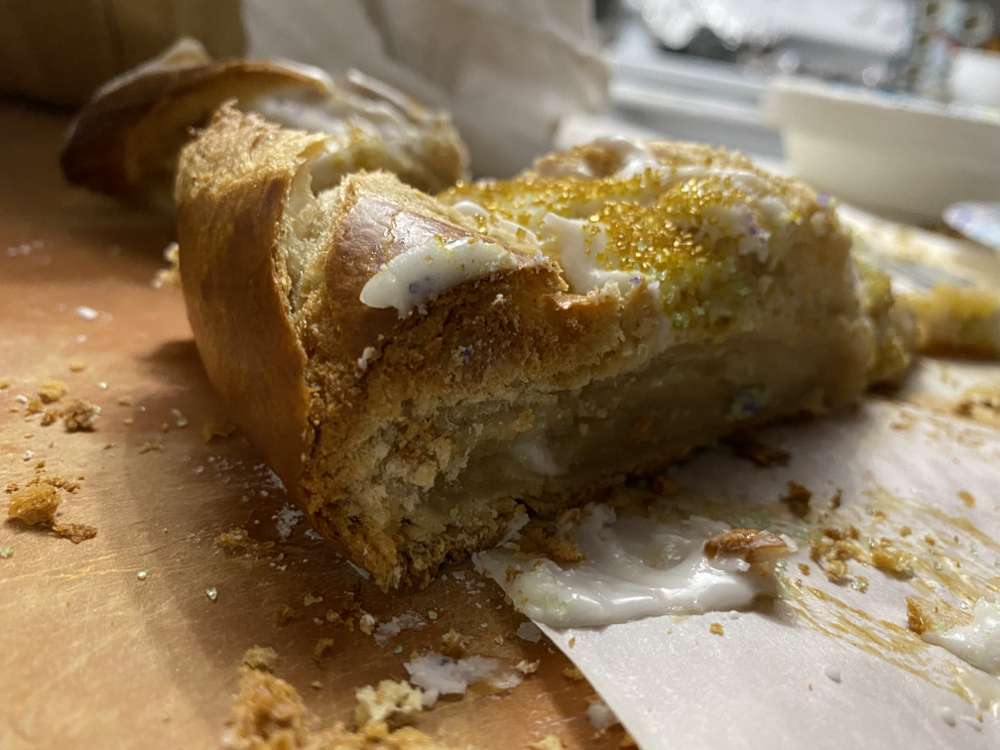 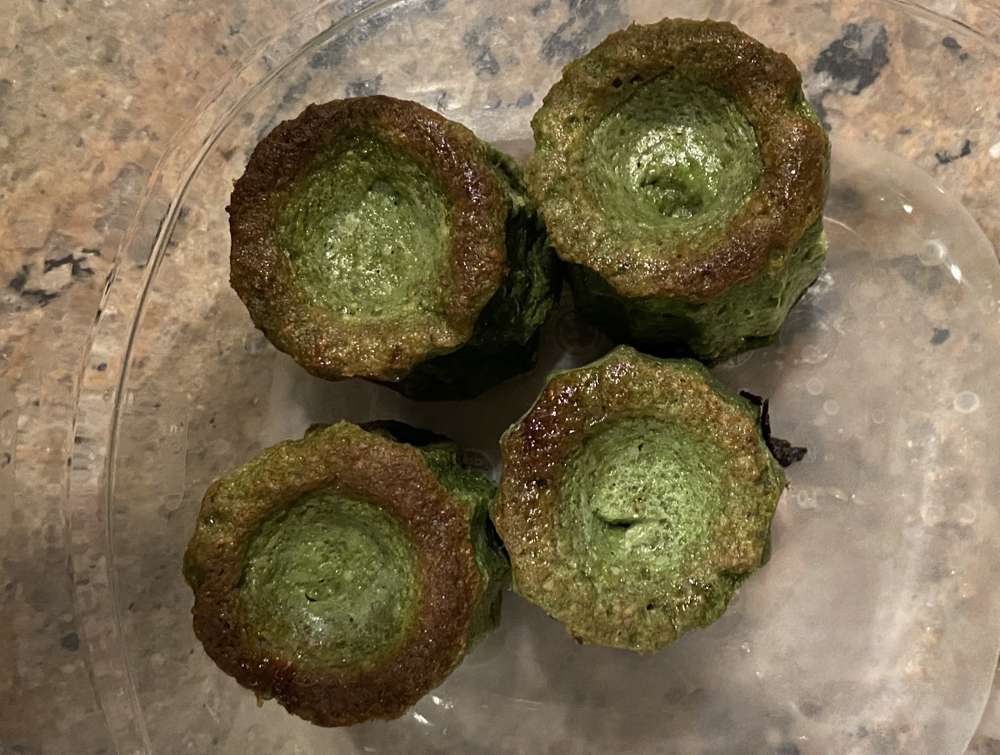 Meredih made Spinach Banana and Oat Muffins from Inspiralized (LOCAL). Her notes:

We don’t have flax, so I subbed whole chia seeds and ended up cooking these for about 30 min with the canneles pan. 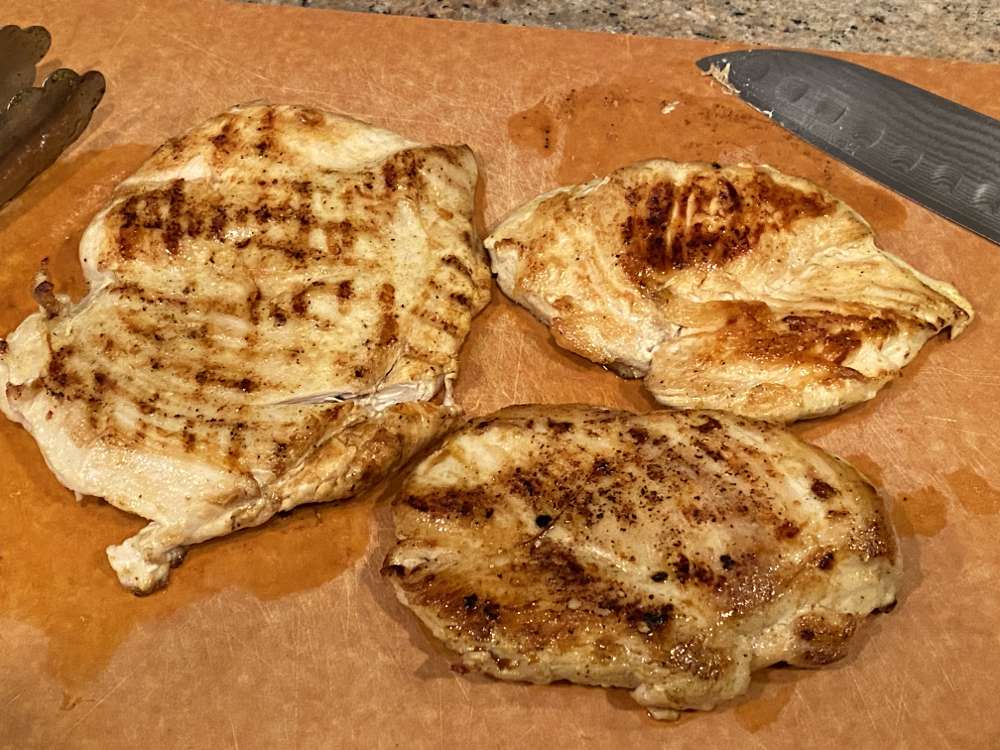 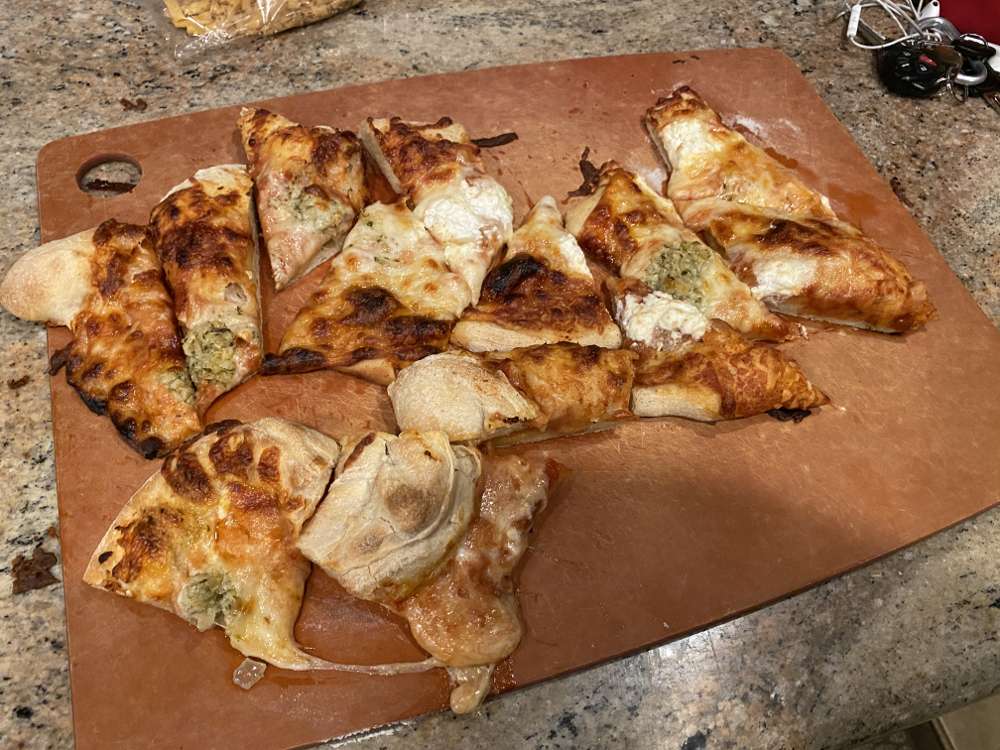 This meal was a mess! It suffered numerous issues, though, in the end, it worked out okay.

So I flattened the chicken, oiled it, and used Adobo Powder. But, it turns out, the grill was out of propane (I must have left it on at some point). This was our backup tank though I remembered there was another tank on the trailer. Turns out, that too was empty.

So I had to use a grill-pan and a cast-iron pan.

For the pizza, I really struggled to lay it out. And then we were out of parchment. I usually use an Air-Bake tray as a makeshift pizza peel so I figured I could just flour it and then slide it into the oven. Nope! It wouldn't budge and any attempt to make it messed up the pizza more. So we cooked the pizza on the air-bake tray rather than on the pizza steel. Basically the exact opposite of what you want.

Still, at the end of the day, it all came out okay. The pizza texture was fine, though not as good as the steel. And the chicken tasted okay, though was more work. I think I prefer Montreal Chicken Seasoning to Adobo on it. 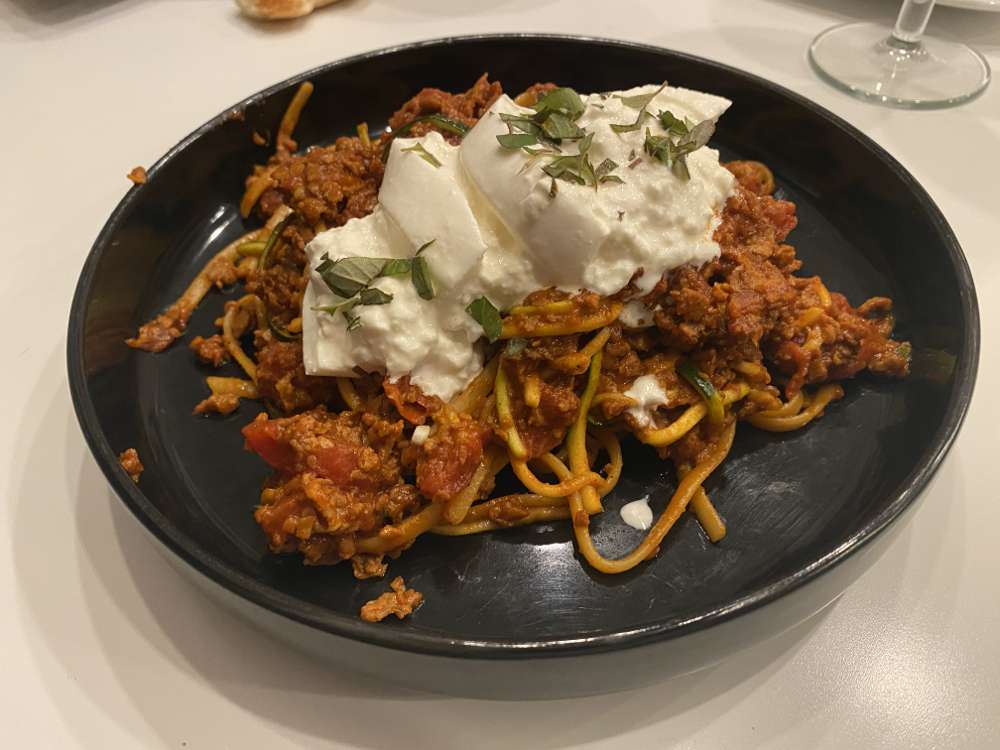 Meredith made Soy Chorizo Ragu. We again did not do the wine since it wasn't in the recipe, but I later added it as optional.

Meredith also skipped the crushed red pepper in case Caroline wanted some, but it turns out that the soy chorizo is spicy itself so we didn't give her any.

It was delicious as usual! 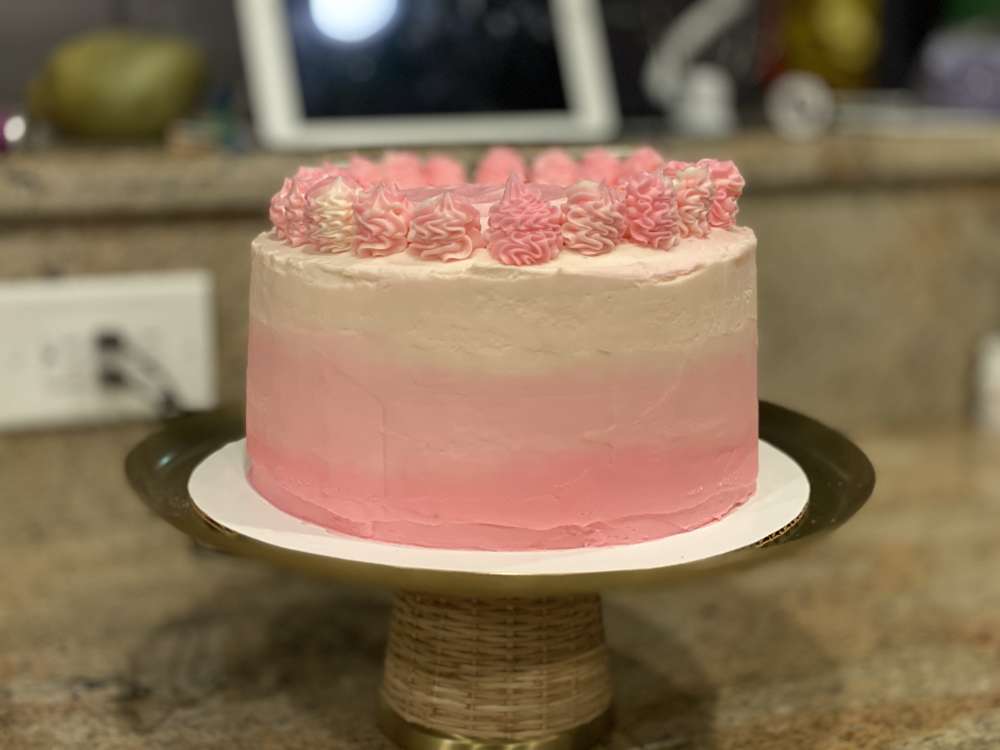 Meredith followed the recipe from Cakes by Courtney (LOCAL) and did an hombre color scheme. She also used raspberry jam (preserves?) instead of fresh ones.

Besides being very pretty, it was also very good! 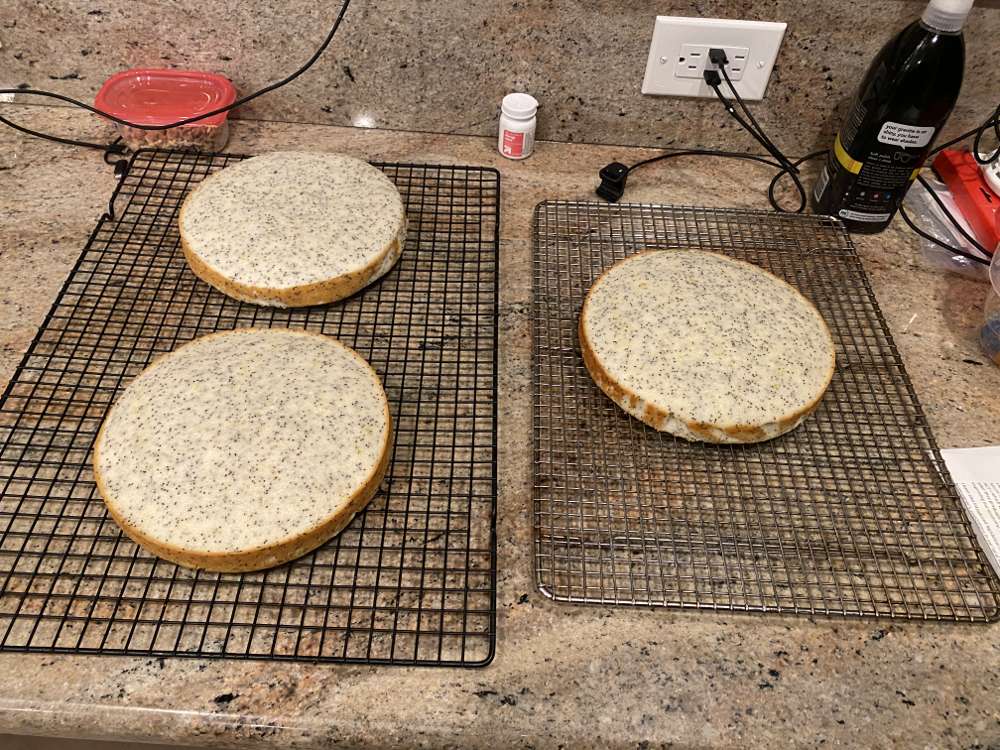 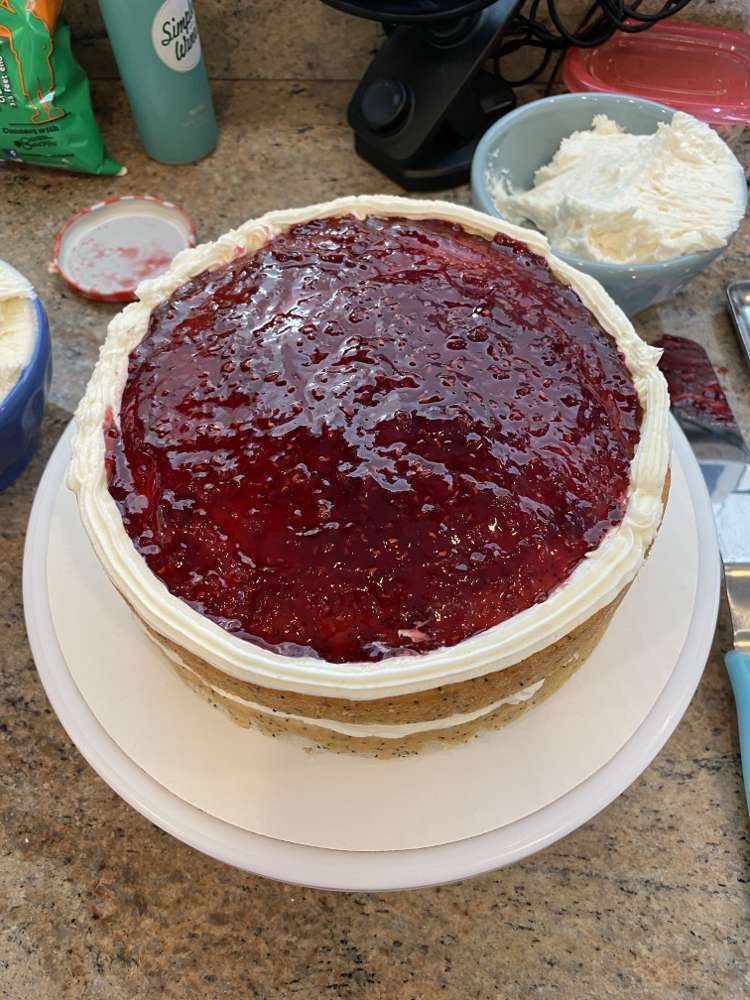 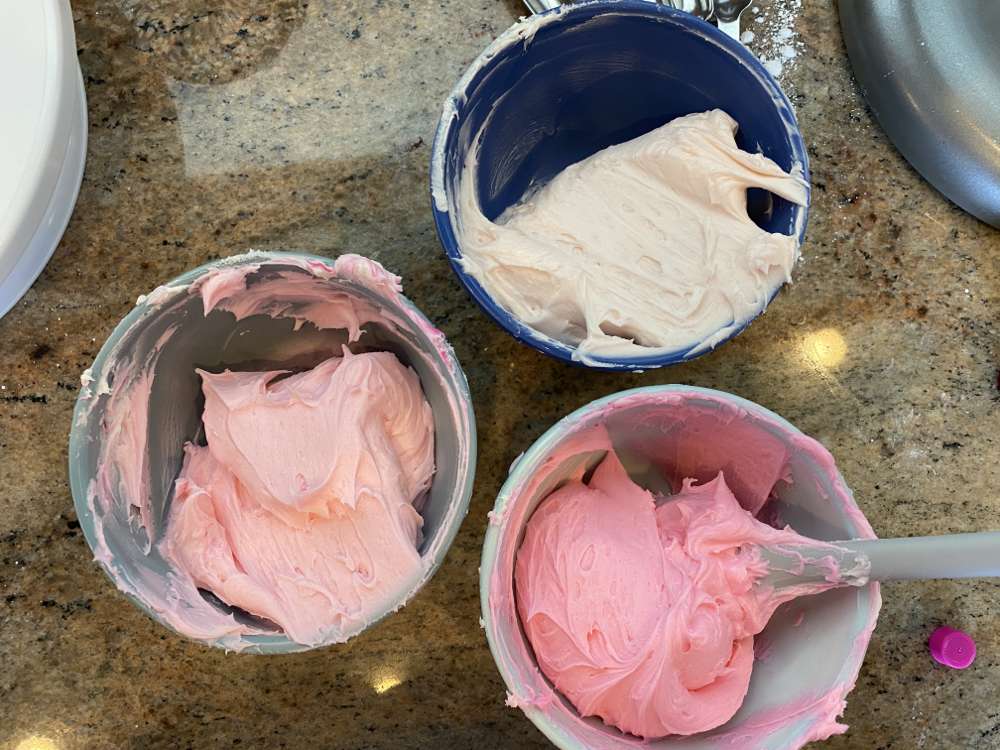 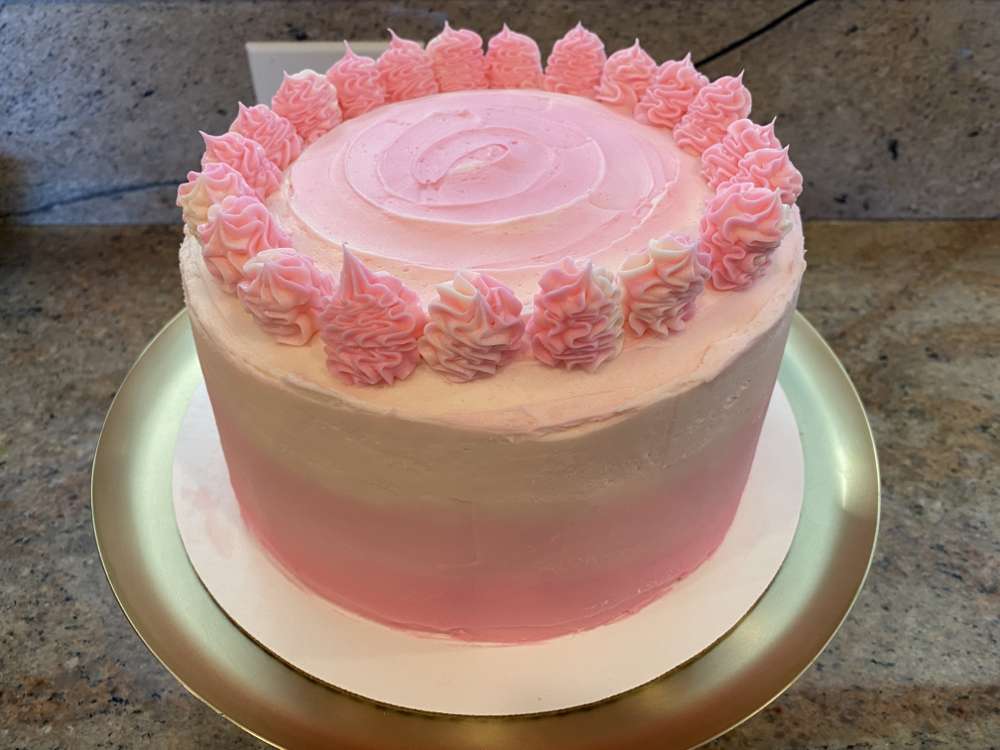 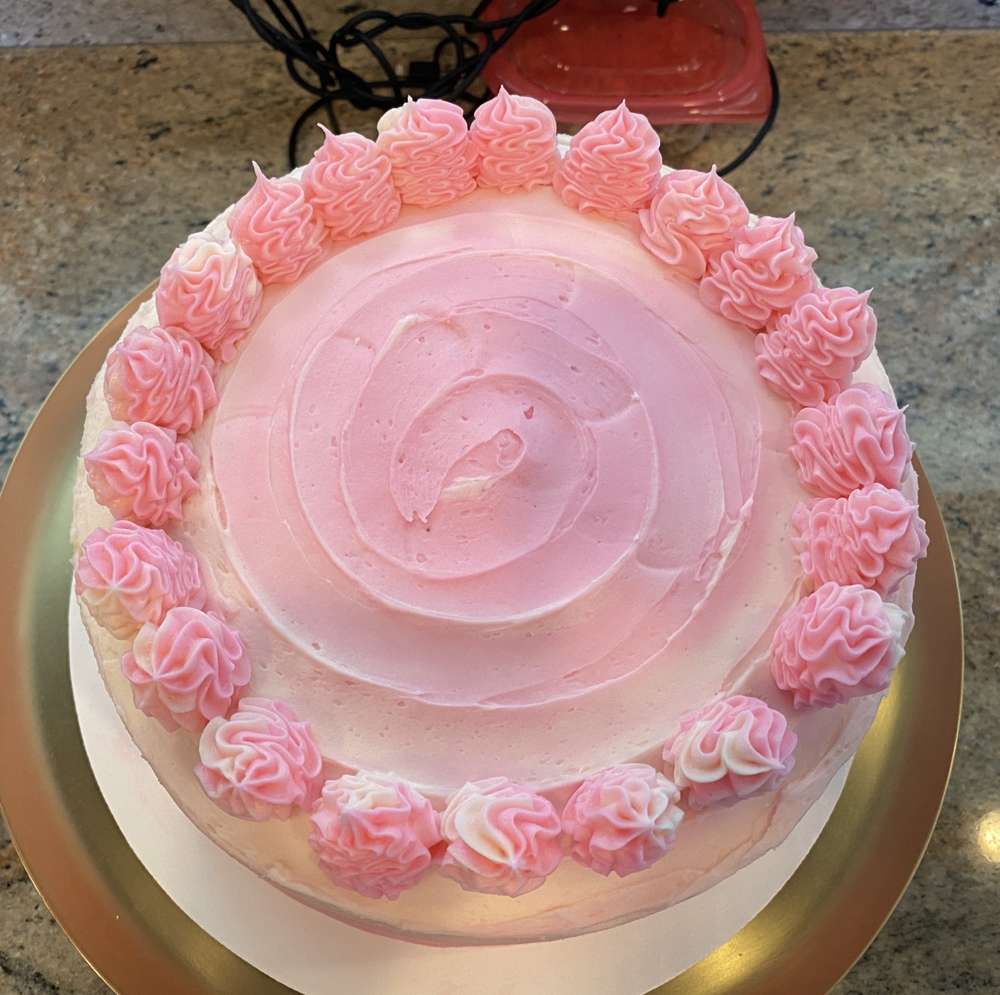 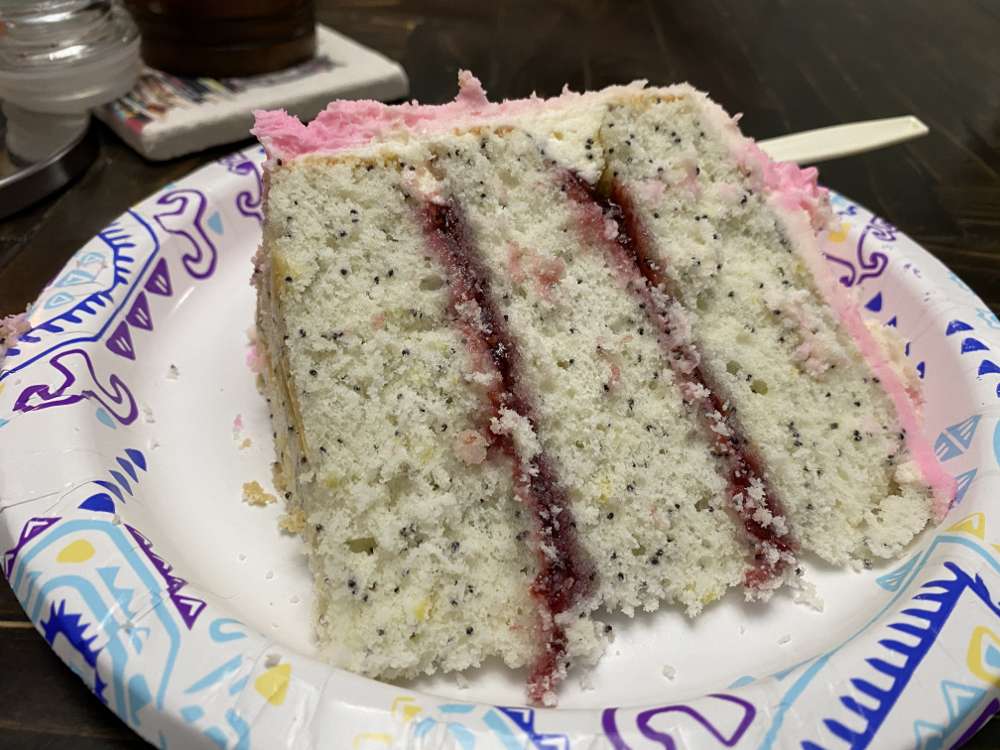 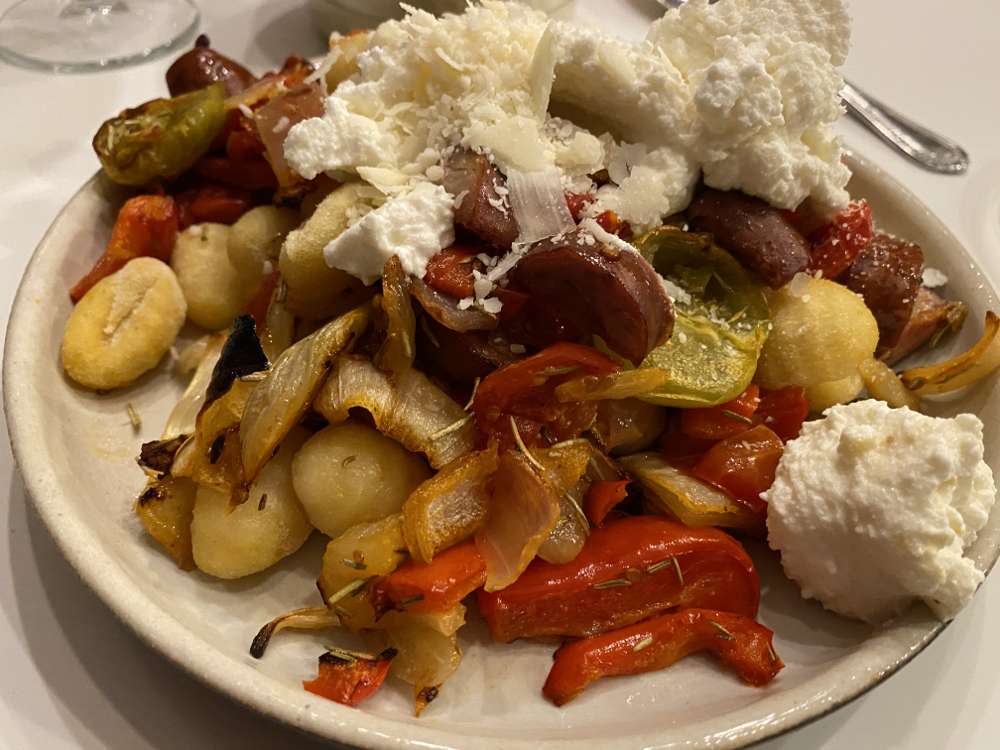 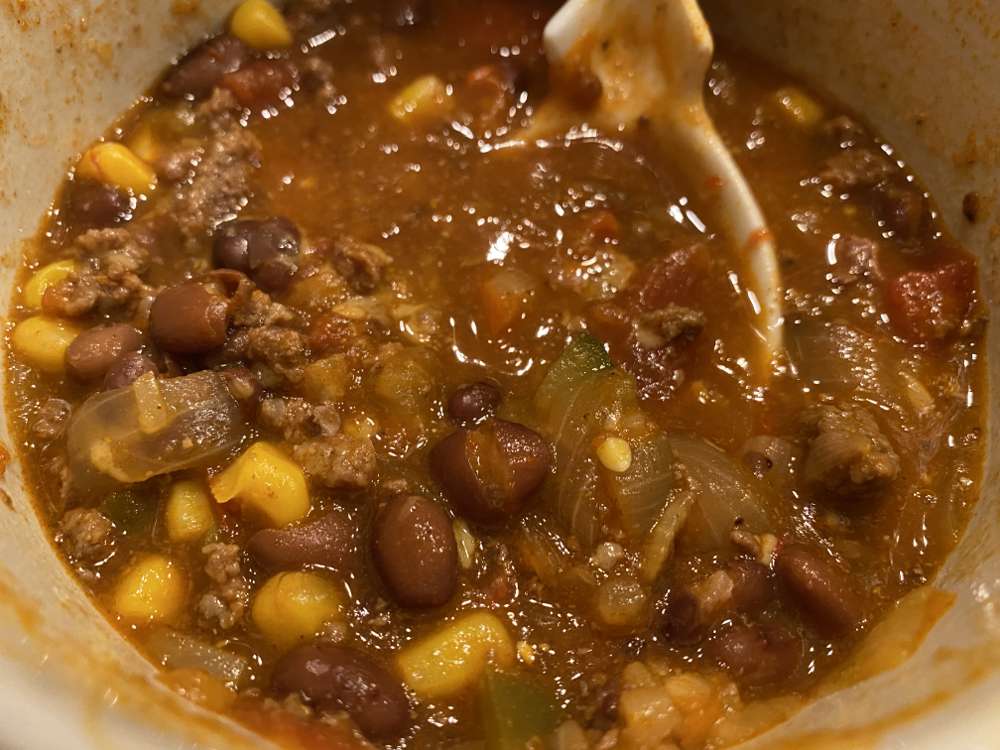 Taco Stew. We simmered it for a long time while taking Caroline out. The extra long simmer seemed to add a lot of flavor 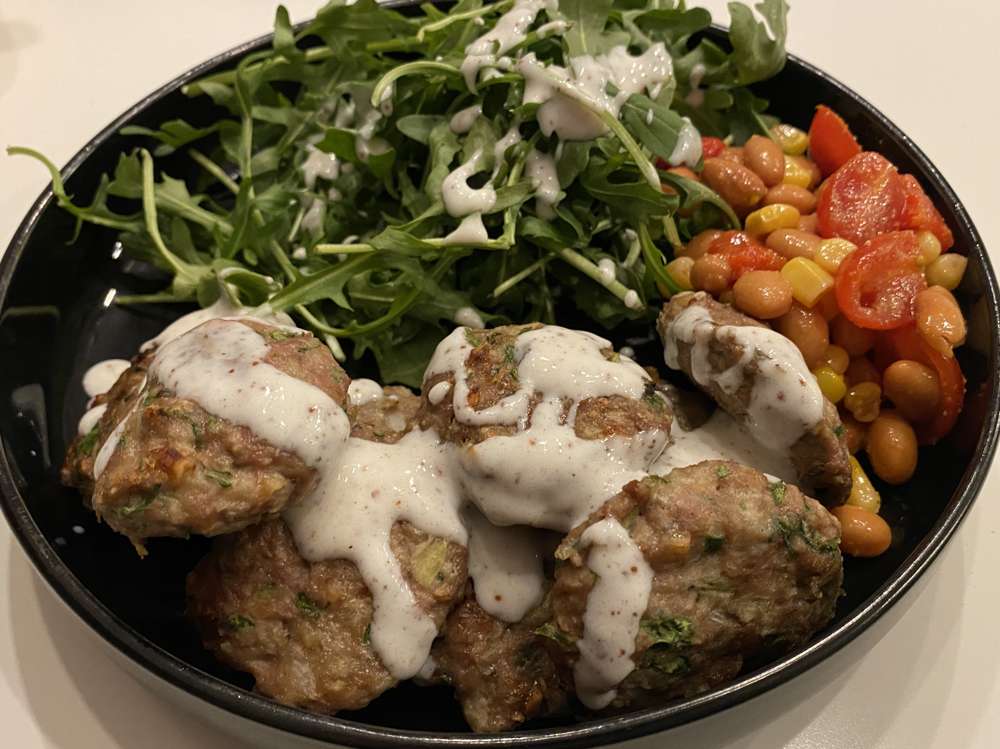 We made the Lamb and pistachio patties with sumac yogurt sauce with our normal changes of poultry and baked but this time we also used walnuts (leftover from Baklava Sticky Buns) instead of pistachios. They certainly tasted differently but still pretty good. And Caroline still liked them (especially with the sauce) so that was a win!