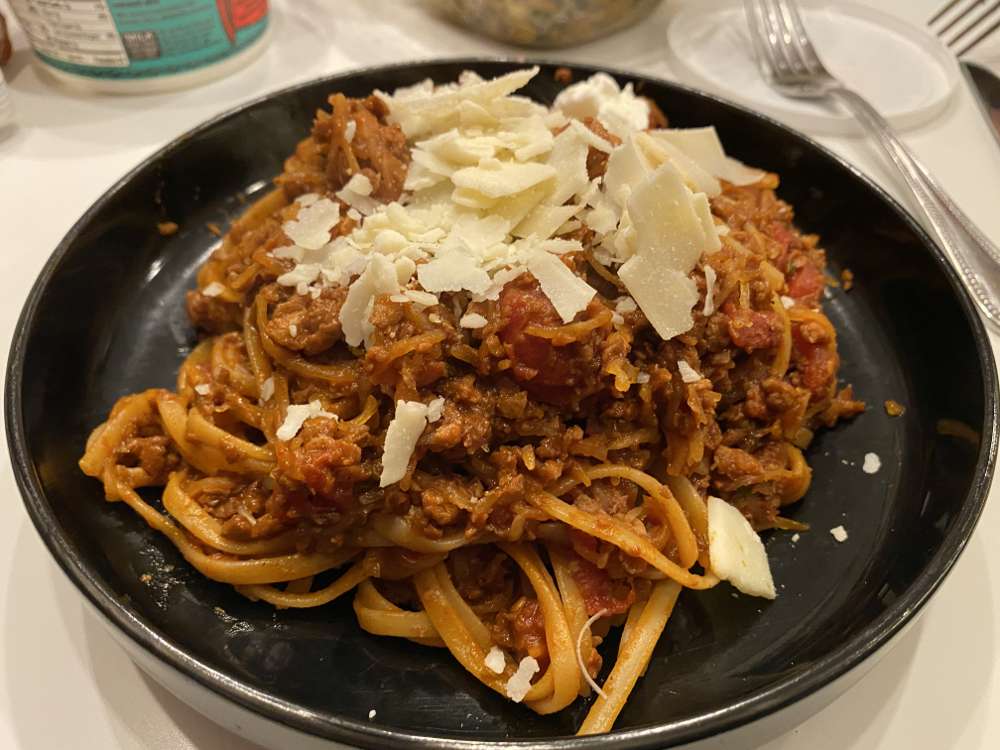 Meredith made our Soy Chorizo Ragu with a mix of spaghetti squash and regular pasta. Meredith even remembered to use wine in it. I do not know if it was the wine or the sugar, but I thought it came out very sweet. Still delicious! 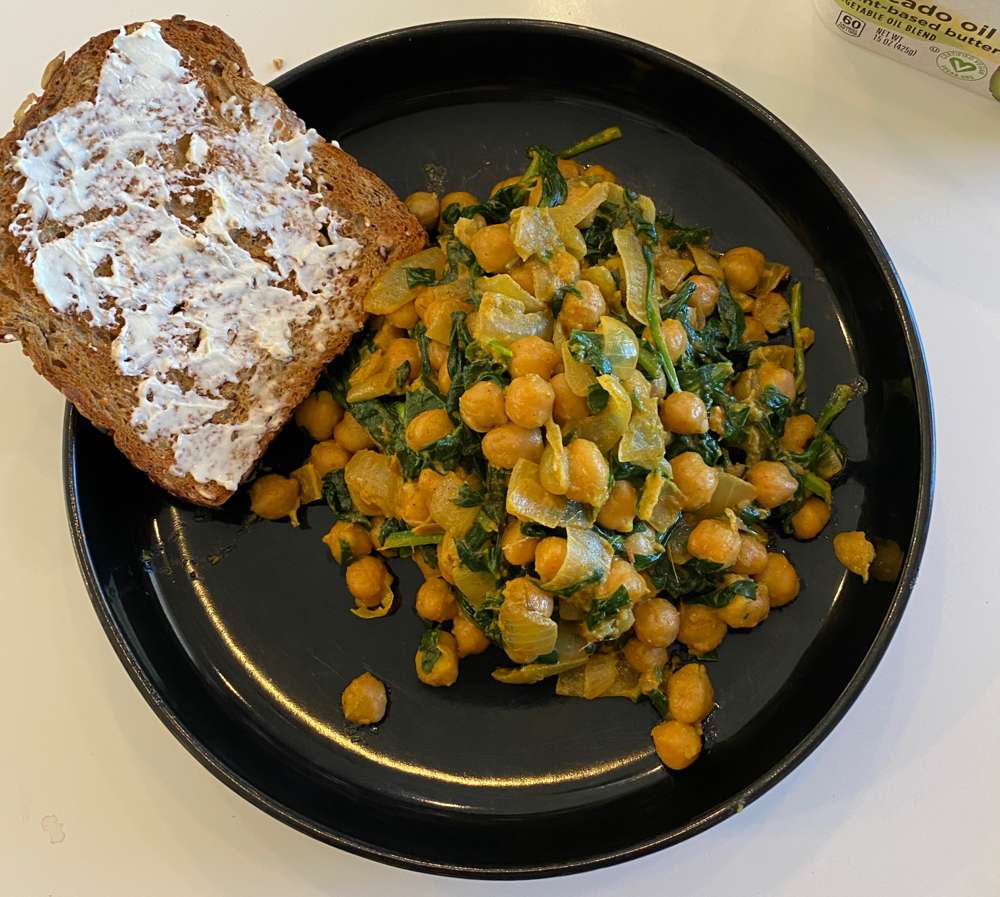 This was heavily inspired by something inspiralized shared on Instagram (LOCAL).

I sautéed an onion with a bit of grated ginger in some canola oil. Then added 2 cans of drained chickpeas and some seasonings: curry powder, cumin, garlic powder, and chili powder. Salt to taste. Next I added maybe 1/2 cup of canned coconut milk. Simmered for about 10 min and then threw in several big handfuls of spinach. Easy and tasty!

Next time: chop the spinach first! Better for Caroline. 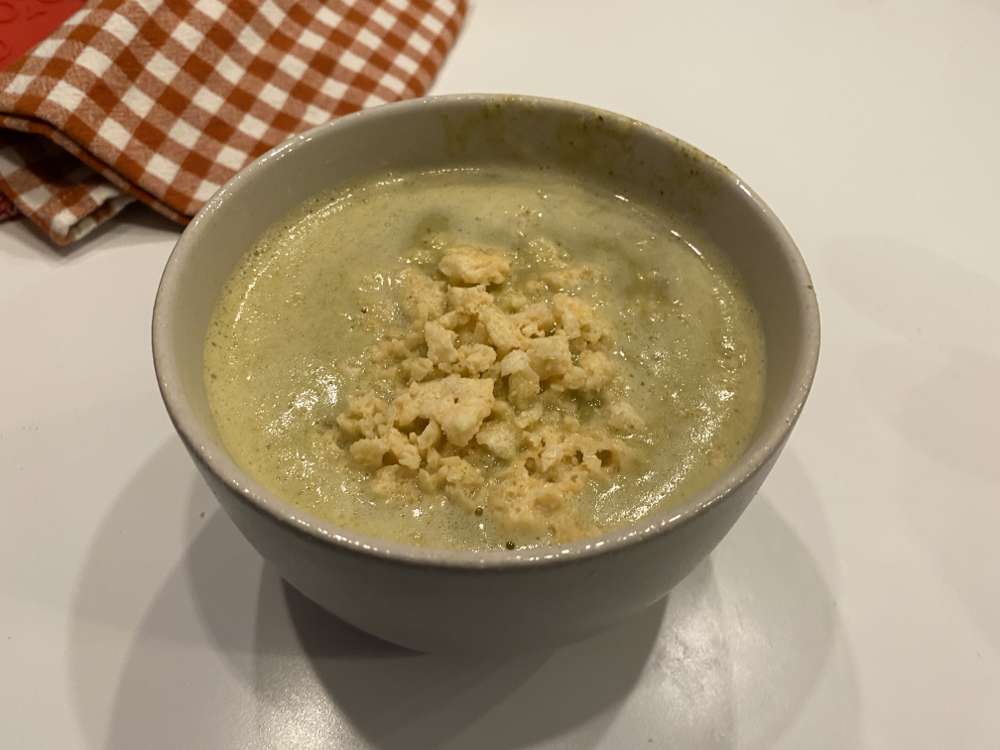 I made Roasted Broccoli Soup. I did more than the recipe though I didn't keep careful track of exactly how much of a multiple. Probably 1.5 - 2 x. I used Trader Joe’s Cheddar Gruyere that Meredith had bought a long time ago. It was about 8 oz after cutting off the mold (There was a lot of mold!). So I likely went heavy on the cheese too.

I let it simmer for a pretty long time before blending. It came out really good. Especially since I likely went heavy on the cheese. Even then, it is still pretty low-calorie since it made a lot of servings at only 8 oz!

I topped it with some parmesan crisps which mostly just melted into it.

Caroline even liked it though feeding it to her was not easy! 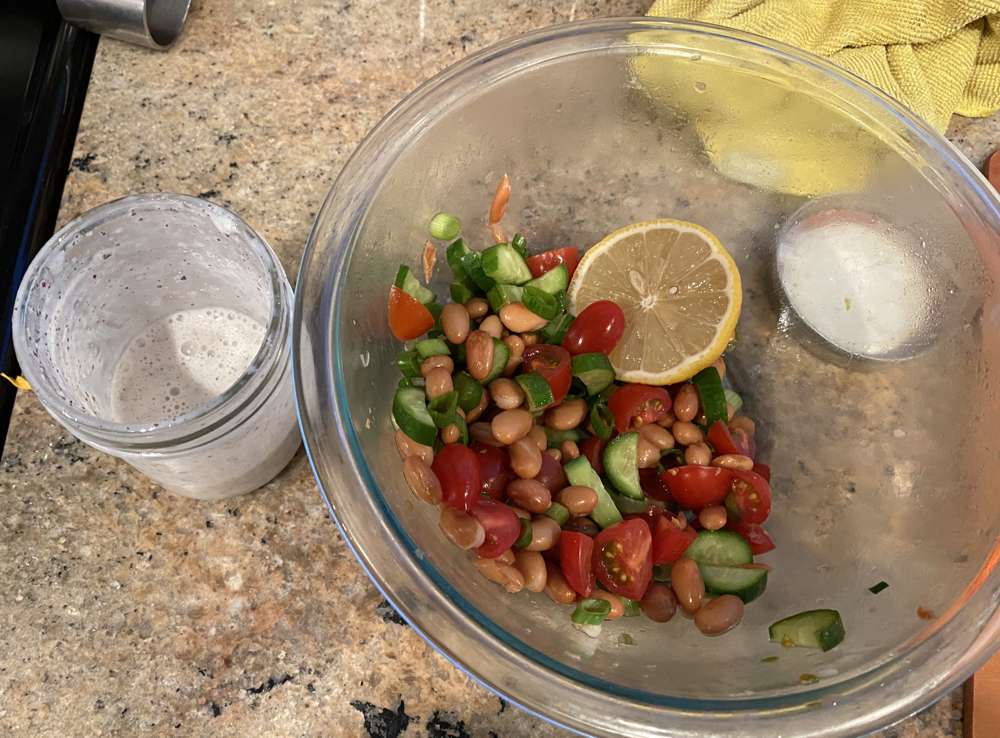 Meredith made Fattoush without bread and added some beans. The biggest difference is she kept the dressing seperate which worked really well to not have it get all mush as we ate it over a few days. 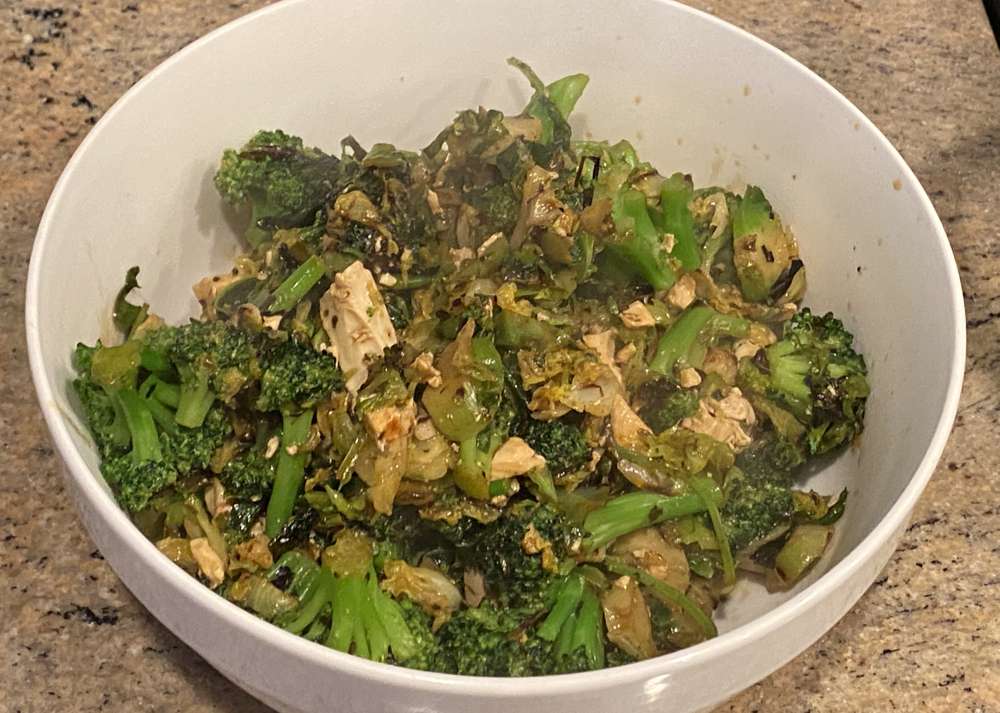 I made a broccoli beef like meal. I used some broccoli but also added a thing of shredded brussel sprouts that were still in the fridge. And the rest of the baby kale. I also used the other half of the fake chicken from yesterday.

It certainly wasn't bad but I also got kind of tired of it by the end. I also used too much Better Than Bouillon making it a bit salty. 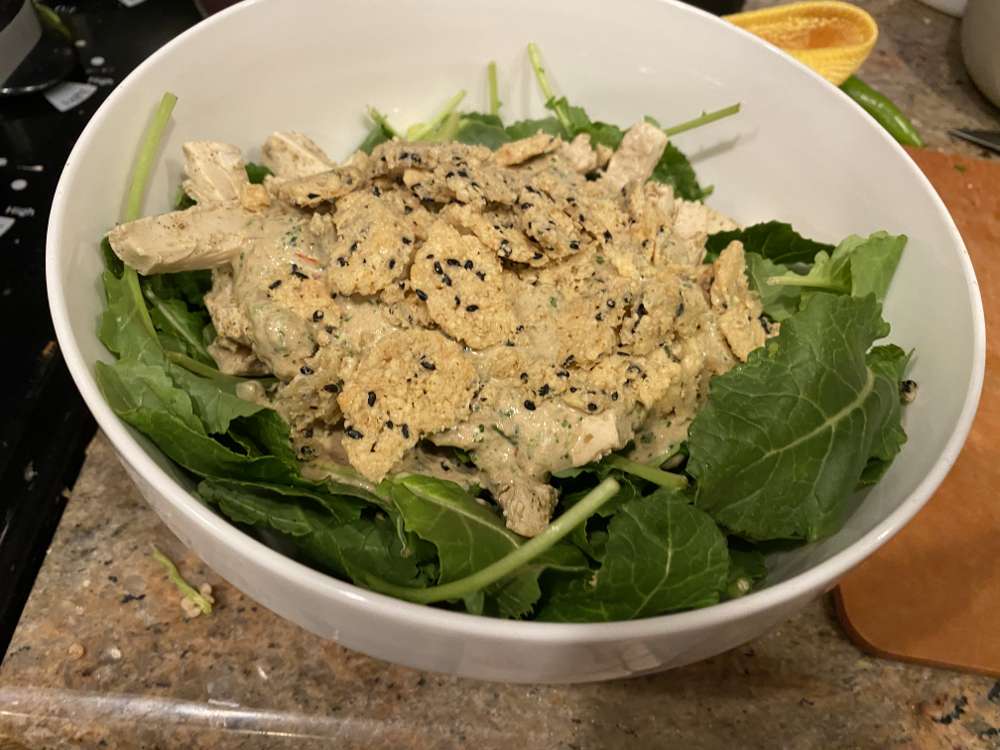 I made Salsa Salad Dressing using a batch of Cilantro Chili Sauce I also made. I used the amount of peppers suggested but it was really spicy, though it didn't linger. Update: Meredith pointed out that the recipe calls for about 7 long green chiles and not 7 serrano peppers. Could be why it was so hot.

It was a pretty boring salad. I used vegetarian chicken strips since the stores were out of real chicken (Coronavirus) and for some crunch I used black-sesame cheese crisps. I just had baby kale as the greens. Not the most exciting but it was tasty! 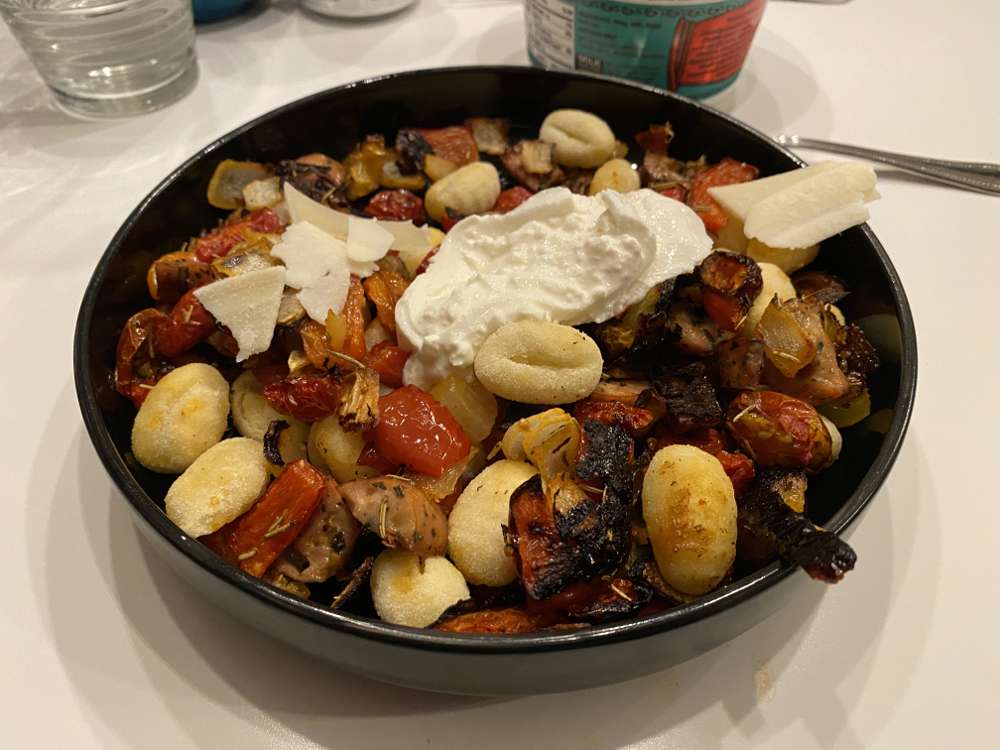 Roasted Gnocchi. No fennel because we forgot. We used a capers sausage from Smiths’ that was very good! 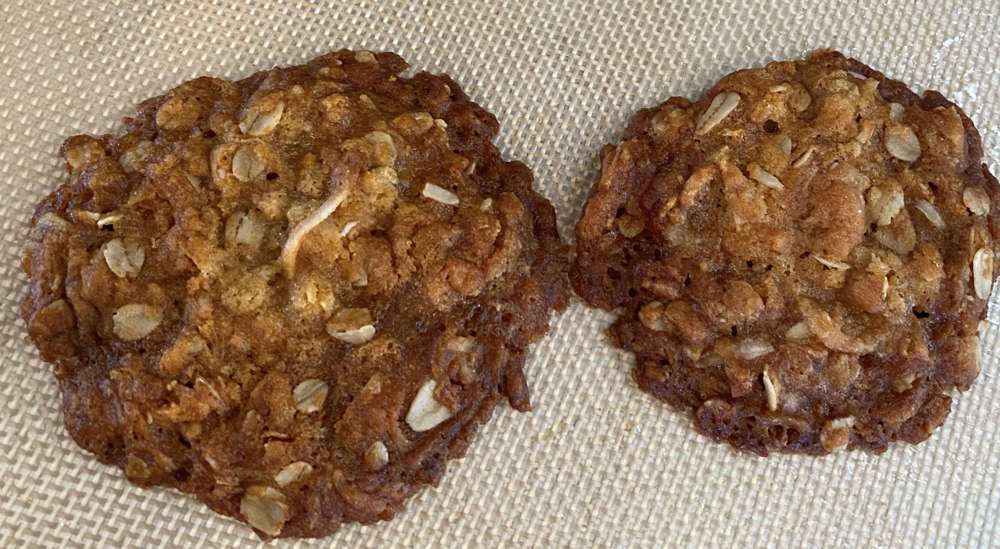 Meredith made Anzac Biscuits for the plane trip this week. They hold together well and do not crumb much making them ideal for travel