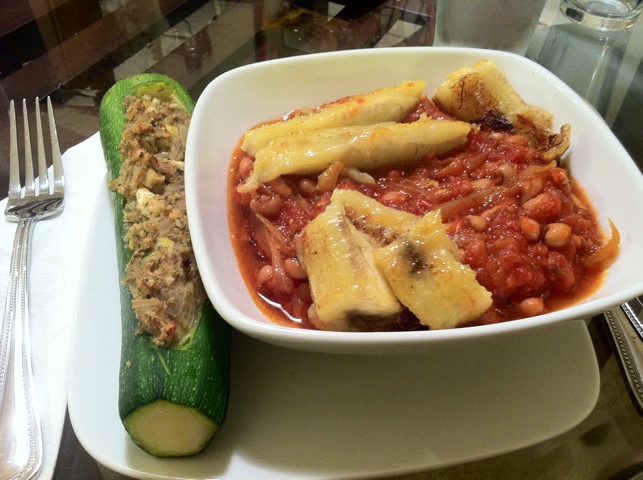 First, the black eyed peas stuff. We followed the same recipe as last time. Except I went overboard with thecayenne. I think I started with more than double the recipe and sprinkled more in. I also sprinkled dried ginger in addition to the real ginger I grated into it. Surprisingly, it was still not _too_spicy though it did have some kick. Overall, it was really tasty. We let it simmer for a while. Also, to make the crushed tomatoes, I sparingly used the immersion blender on diced tomatoes so that there were still some chunks. Again, I used smart balance on the bananas.

Meredith made the stuffed zucchini again (first time) from the recipe out of her Italian cookbook. She translated it below. These were also very good. The filling had a nice flavor to it and it makes zucchini, which is already delicious, even more interesting. She skipped the nuts and used fat free feta, as well as egg beaters.

Stuffed Zucchini(From Meredith's italian book, translated by her from Italian)