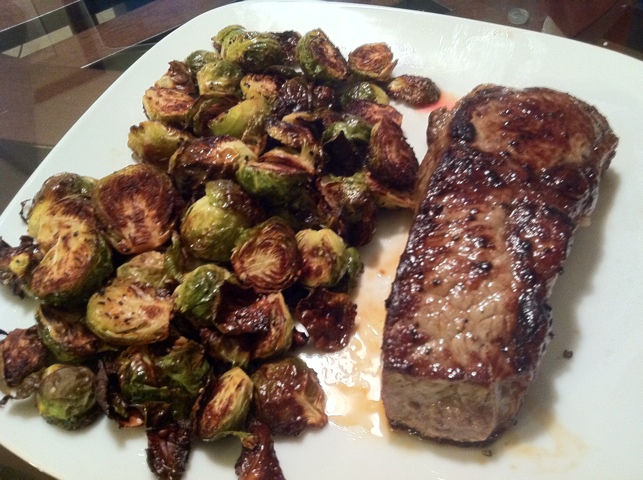 Meredith was away so I decided to try making a steak. I bought the smallest NY Strip steak I could find and followed a combination of many oven/pan cooking methods. I needed to keep the oven at 400 for the brussel sprouts so that limited me. I let the cast iron pan heat up in the oven (took a long time), I sprayed olive oil pam on the room-temp steak and sprinkled salt and pepper on it. After the pan was hot, I put it on the burner on hot for a bit longer. Then I put the steak on and seared each side for 1 minute without moving it. I put it in the oven with the pan. Mostrecipessaid to cook four minutes on each side in the oven so that is what I did. When I took it out, I am glad I decided to quickly check the temp since it was still raw inside (not rare, raw!). So, I cheated a bit, I switched from the instant read thermometer to the one that has an in-oven temperature probe. Using that, and filliping one more time, I brought it up to about 135-140 for medium. It was a very thick peice so it wasn't too surprising that it took longer. I did let it rest for 2 minutes but it may have needed more to absorb more liquid.

Overall, it was the best steak I have ever cooked but that doesn't say much. It still was not amazing. I do not know what I am missing. Maybe it really does need butter? Since Meredith doesn't like steak, I do not imagine I will trying again anytime too soon but when I do, I'll investigate rubs. One nice thing about cooking my ownpieceis that I knew where all the fat was starting out so I could easily cut it off.

I also had roasted brussel sprouts. Always a favorite of mine. However, I got a bit nervous and took them out a tad too soon for my taste even though it was probably the right time for most people (I like all of my cooked veggies overcooked apparently)