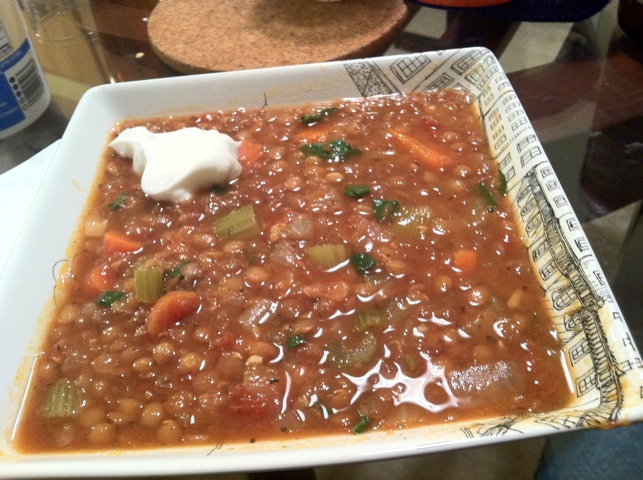 We made lentil soup following the same recipe as last time(in the comments). We did make a few changes including using three (instead of two) stalks of celery and carrots to make up for the fact that we were about 1/4 cup short on the lentils. Also we put a good amount of beef Better Than Boullion in to give it a beef base. We used chicken last time. Finally, we used apple cider vinegar instead of plain white. Becuase we had to be somewhere, we let it simmer on the stover for a very long time which probably increased all of the flavors.

it was very good though I think I liked it more the last time (but that was almost exactly a year ago so who knows). I don't know why the color is so different from the two pictures. Note that we used regular brown lentils for both. The nutritional information is very different for different lentil types (at least that is what irememberlast time I looked).

Other than the simmer time, this is an extremely easy meal. And it is enough for a meal without anything else! We will probably do this again soon!