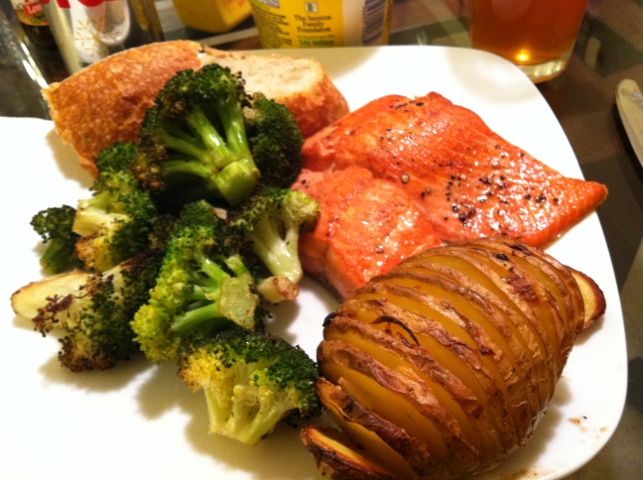 I decided to invite some friends for not-christmas dinner. I made salmon, hasselback potatoes and roasted broccoli.

I did the salmon on the stove and in the oven. I had read a lot of different recipes for salmon on the stove and there were a few different approaches. I settled on using the cast iron pan and the oven. I seasoned the salmon with salt and pepper, then seared them flesh (not skin) side first for a minute. I flipped them, and then threw them in the oven (preheated at 425) for like 6 minutes. They cooked really nicely and the flesh came off the skin with ease. My only problem was the pan was too hot at first and smoked when I added pam. Iwipedit and then I just cooked them without the pam. It didn't stick which was nice. The other thing I did was make sure I started with the fish at room temp. Thankfully and somewhat surprisingly, I didn't overcook the fish!

I also made hasselbackpotatoes. That is when you slice it 3/4 of the way through and fan it out. I used two wooden spoons as knife blocks. I initially alternated putting garlic and shallots between each slice. Then, I read some more recipes and it sounded like you did't have to put stuff in each and every slice and they will just open if you wet them first. I basically just kept it as it was except I took out a few shallots and garlic. Isautedthem in olive oil then poured the strained oil on the potatoes for flavor. Next time, I will read the recipe _first_and then try to cook it. I want to do them again, but I will read more recipes first. Oh, I also cut off a bit of the bottom first to give me a flat surface.

I also roastedbroccolias I describe on 2011-12-06. They could have used a bit more time but they were still good. I also served some rosemary and olive oil bread.

Finally, for dessert, I made stuffed dates. They were pretty easy since once I cut out the pit, I used leftover German Butter Cream from the Thanksgiving Red Velvet Cake. I topped them with some powdered sugar. They were good!