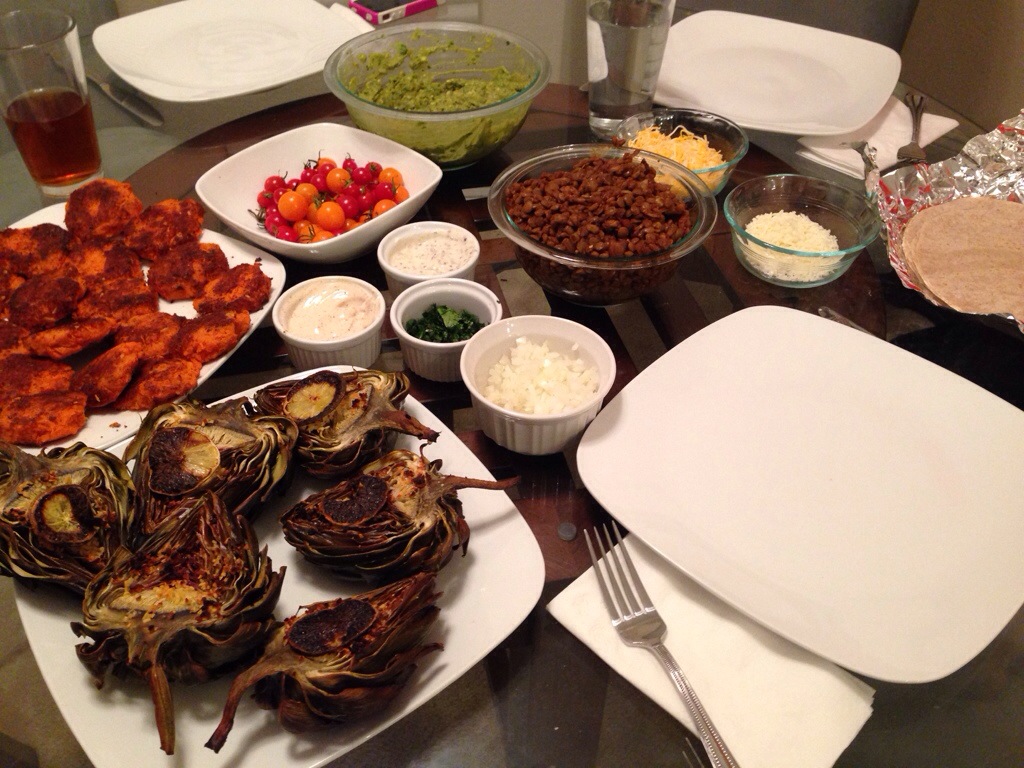 This was quite the meal. Emily wanted mexican so this is what we came up with. In no particular order:

I had read a few sites on artichokes and decided to simply cut it in half, trim the stem, coat with garlic and small slice of lime. I roasted them for about 40 minutes at about 400. I had to take them outbecause they were burning.

When we tried to eat them, they were still too undercooked. We couldn't get to the meat of the artichoke. I microwaved them for 5 minutes which helped a bit but not really enough.

I like the idea of using dry heat but it justdidn't seem to cook them enough. I will look into steaming them and_then_ roasting. Or, I saw something that used a foil packet. Maybe, I simply need a lower temperature.

Meredith made the dips too. They were both fat-free greek yogurt based. One was honey mustard where she mixed mustard and honey (duh) into the yogurt.The other was tequila-lime (which tasted a bit like margaritas). Both were good though the honey mustard was more popular.

These were based on the recipe below. The idea is that you boil sweet potatoes and then press them (smash them?) flat. However, it became clear pretty early on that they were not smashing well. I do not know if they were too big or if I had done something else wrong, but they weren't really working. So, we microwaved them a bit more and mashed them. Then, we used the seasoning mix (doubled) and coated both sides. We baked them for about 25 minutes at 400.

They came out really good. The sweet potatoes themselves had a lot of flavor and the seasoning mix was spot-on. We will do them again

Meredith made the guac and it was absolutely amazing. She can come back and comment on exactly what she did, but it had some different ingredients than usual. Most notably, I very finely chopped some onion, cilantro and jalapeño peppers. I do not know what other seasonings she used but it was amazing!

I made the taco filling. First, I cooked lentils like I do for the moussakka. I separately sauted an onion and a whole container of finely chopped mushrooms. I combined them all. I used taco seasoning but I also added garlic powder, pepper and crushed red pepper to the mix. I let it all cook down together.

Other Stuff and General Thoughts:

We served it with chopped onion, cilantro, FF greek yogurt (as sour cream), cheese, low-carb tortillas (gummy. Would not rush to get again) and mini tomatoes.

Everything was very good except the chewy artichokes. The meal was a lot of work but it was fun. There was lots of collaboration and everyone (Emily was there too) working together.

Crash Hot Sweet Potatoes (from The Creek Side Cook)