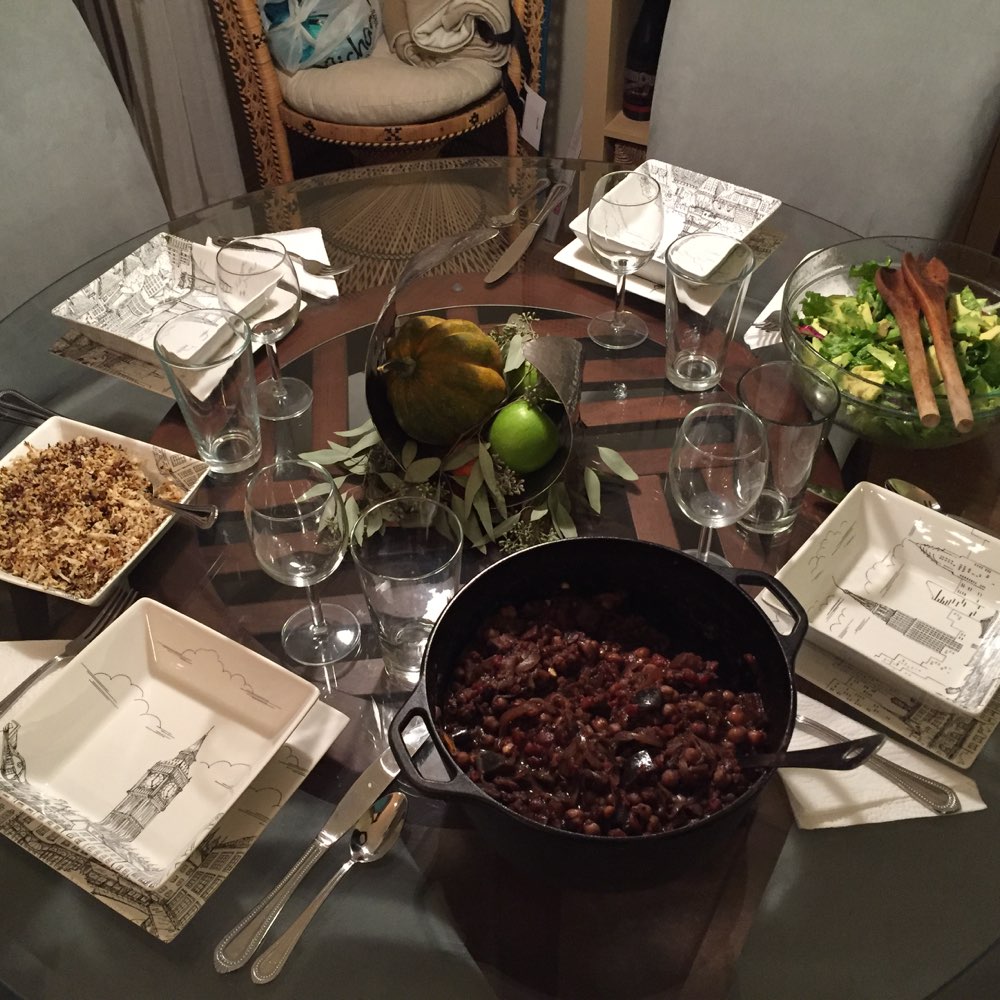 Meredith and I had friends over so we decided to make some strange and different foods. They brought the salad which was very good but I do not know what was on it. I talk about the things we made below 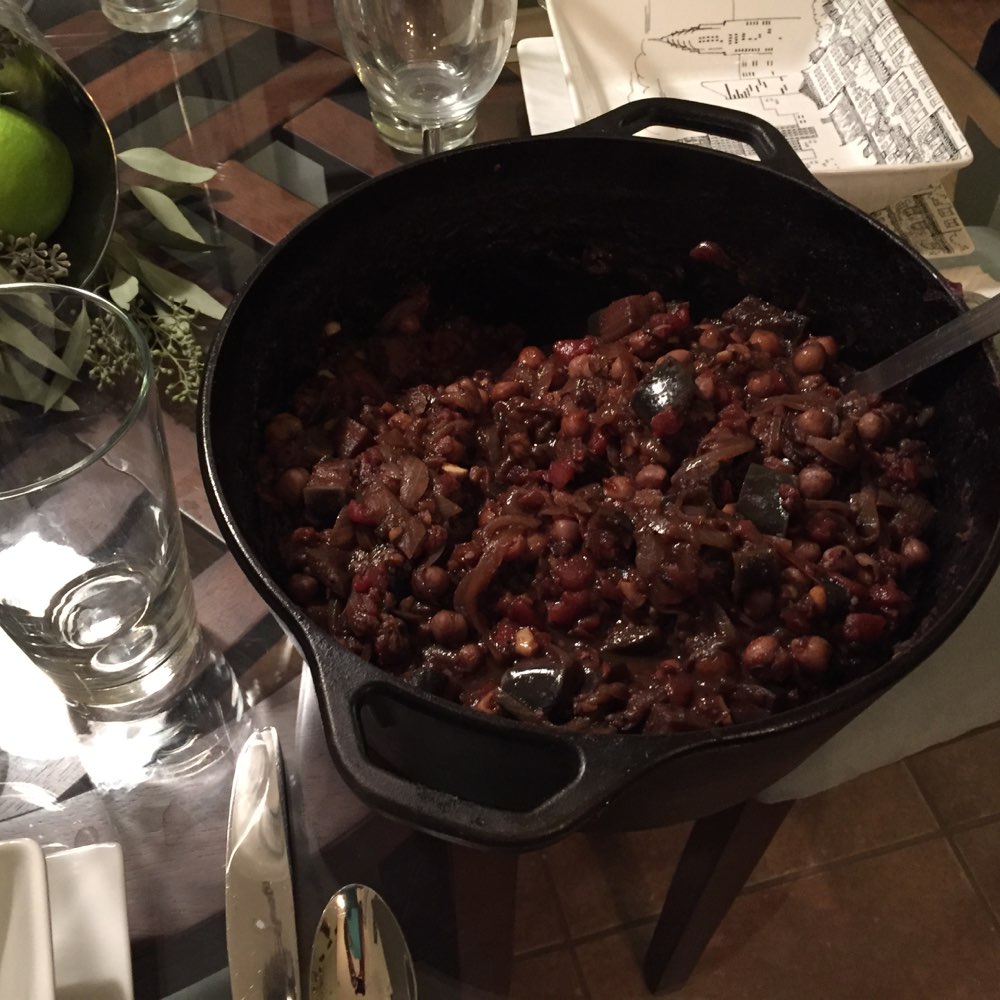 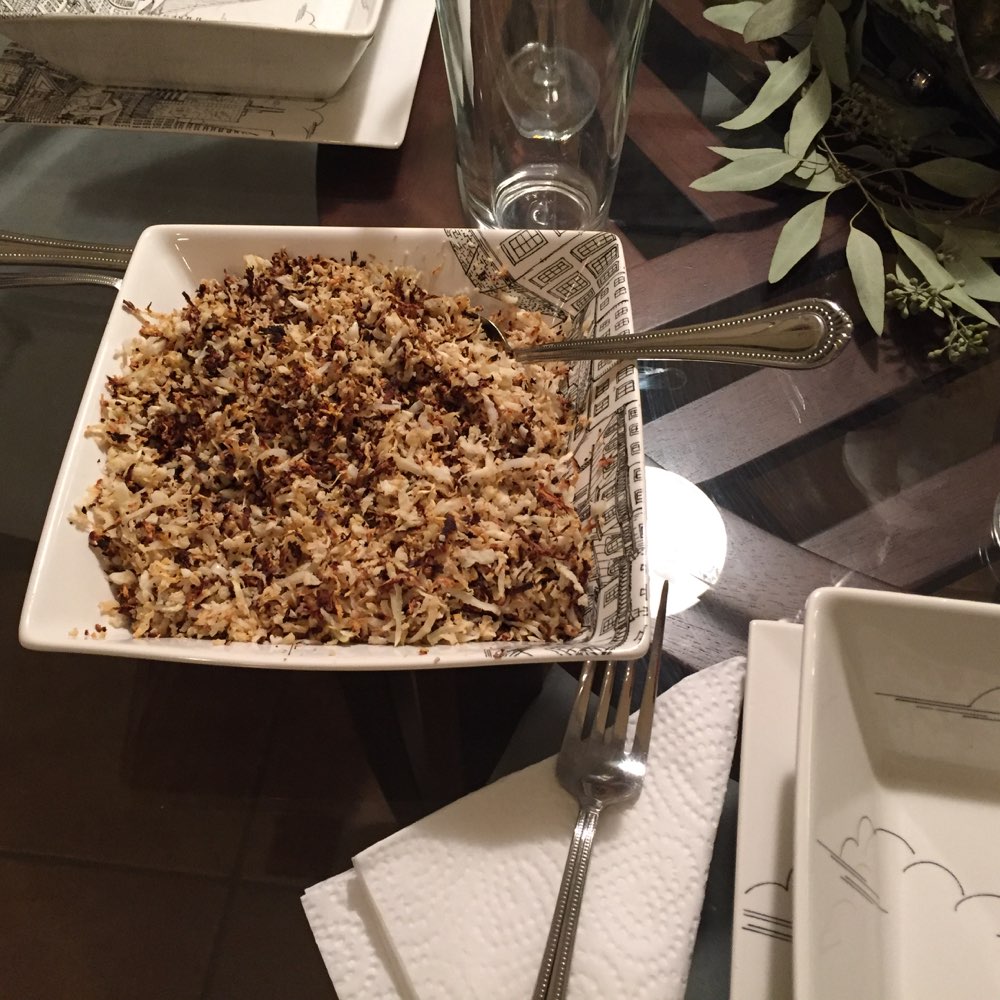 Other than doubling everything, we stayed pretty true to the recipe. I should note that we didn't have ground all-spice so I ground it myself but they ground easily. We also let it cook for a good, long, while.

The one thing of note though is that I tried to make my own pomegranate molasses. I used this Alton Brown recipe (local) except that I apparently had some trouble. I followed the recipe closely, but I think that I let it go too long (either time or heat). When it cooled, it was like taffy. And made much less than the 1 cup. Then, after it was in the fridge, it turned to a solid block! I was able to microwave it (and turn it essentially molten) and use in. I used the planned amount (roughly double the Moussaka recipe) but note that it was probably even stronger.

I think, in the future, I will not be making it myself. I am sure I saved calories over the super-sweet store-bought stuff, but it just doesn't make sense. The cost of the pomegranate juice plus the time and effort aren't worth it.

Still, I thought the Moussaka came out pretty good. I was worried as it was cooking since it didn't have the full flavor, but as it cooked down, it started to taste great. I think next time, I will see if my Lebanese Cookbook has any different suggestions just to mix it up (though it would probably be less easy then). We served it with a double portion of Cauliflower Rice

Pomegranate Syrup or Molasses (From Alton Brown, via The Food Network)
Local Copy -- (U: guest, P: name of my dog, lower case) 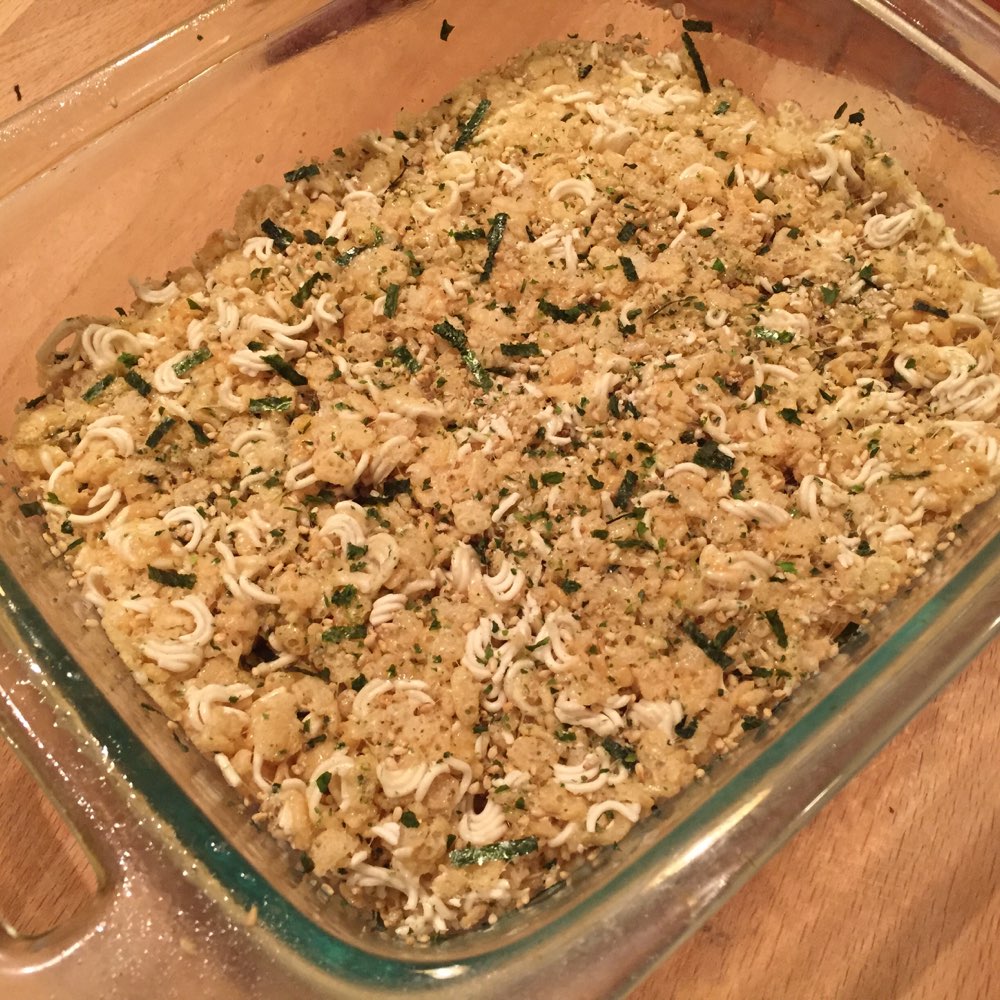 This was a strange one...

Meredith found this recipe for Ramen Rice Krispies on Joy The Baker (local). The broken (junky) ramen noodles are interesting enough, but when you add the furikake (to quote: "sweet/salty/seaweed/umami") seasoning, it gets very, very strange.

Making it was easy enough, though I used my hands to toss (since that is really the only way to do it) and it was HOT!. We just halved the recipe, which made more than enough for us (we only had one pack of ramen).

The only other changes we made were to use pam on the pan, and to use all of the ramen in the mix and just furikake on top.

Meredith seemed uncertain but I really (really!) liked it. I love salty sweets and this was a great example of it. We bought the regular furikake (see pictures below) but they also had others including one with bonito (fish) and one with wasabi. We will not be touching the fish one any time soon but the wasabi could be interesting!

Only thing that would have been better was if they were chewier. They came out hard as a rock. 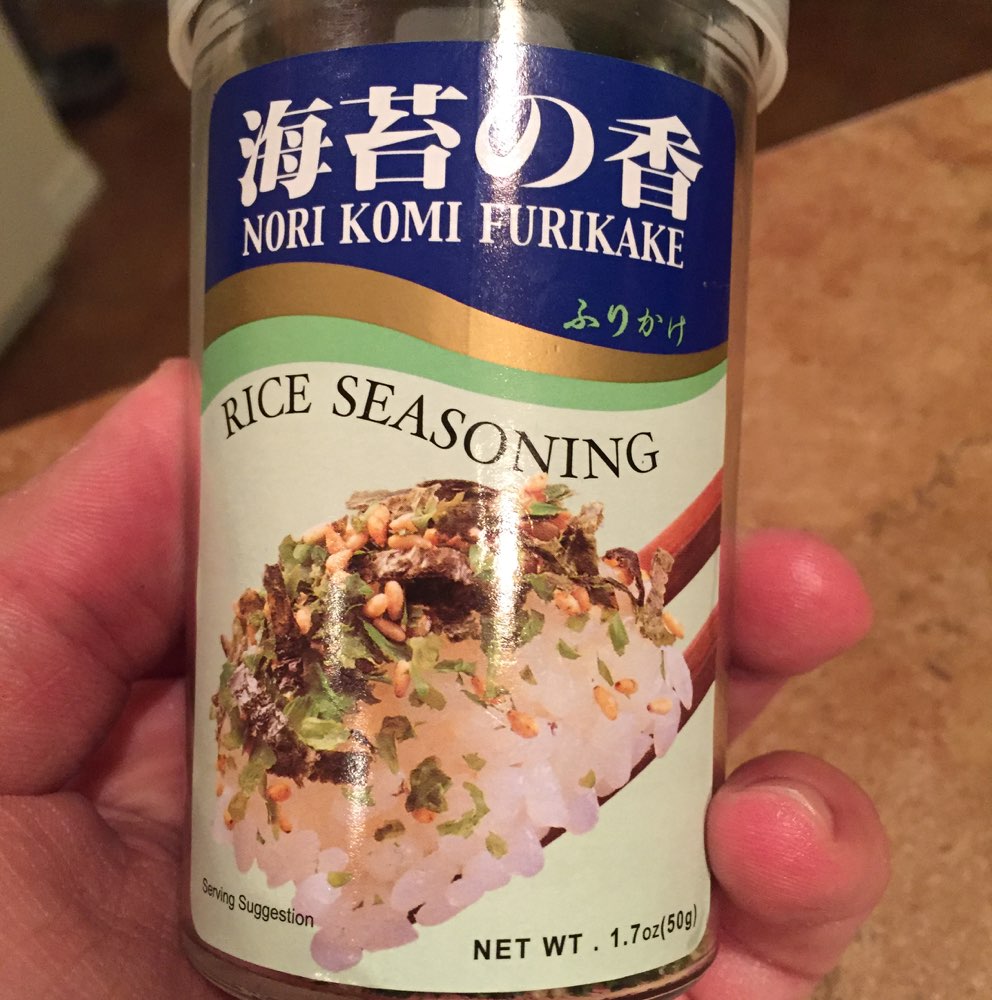 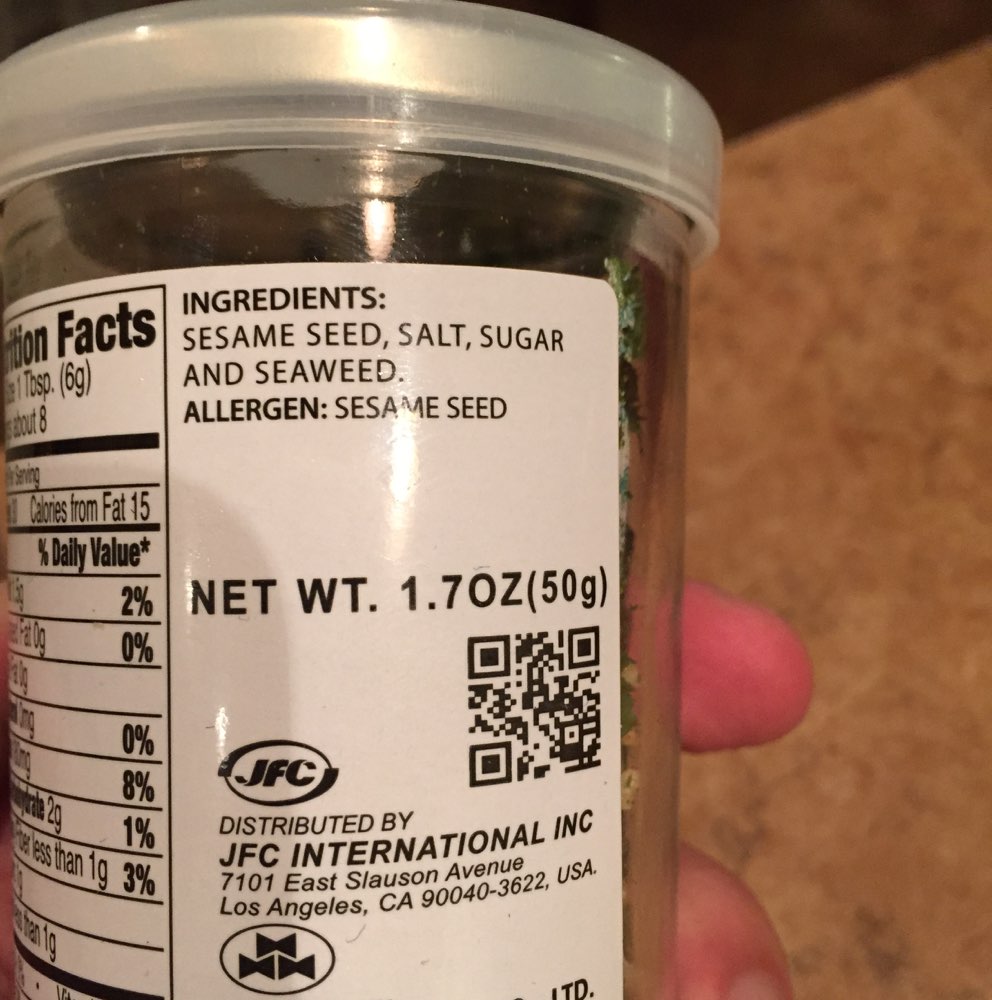