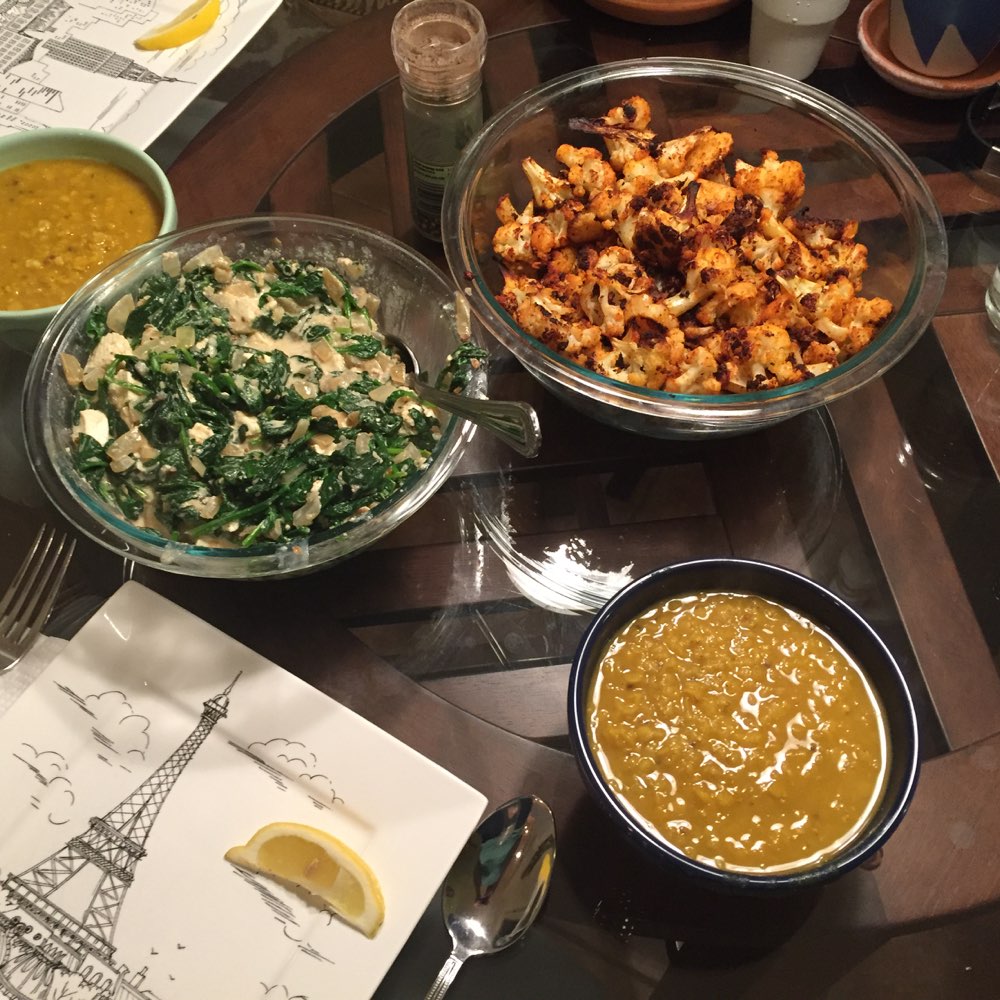 We had a family friend visiting with a very restrictive diet but we decided to see what we could do. Here is the full list:

Add on that Meredith and I are trying to eat much more healthily and this becomes quite a challenge. We decided on Indian but this was also hard as tomatoes seem to be everywhere!!! I mean, we had to search through tons of recipes for ones that didn't call for them in the first place.

But, we ended up with:

I'll get to the saag panner soon, but first just the paneer. We wanted to make it low fat since otherwise, it is like eating cheese and that is a ton of points. By the way, in the future, we could do tofu in place of paneer and save a ton of calories and ease. But no soy for this meal.

I read a bunch of recipes but went with this "Food for 7 Stages of life" recipe (Local1). I liked that they went through all of the different options for curdling the milk and made it pretty clear that skim was ok.

However, we went with 1% (hence the really low fat but not quite fat free). We made some other changes as we went including:

The thing that really amazed me was low little it made. As you can see in the photos below, it made all of 7.25 ounces out for 1/2 gallon 1% milk (73 oz.). That is insane! You can see how much whey is left too (we saved some for other uses).

Oh, next time, I will use a larger pan. Once the milk started to boil, it made a huge mess! 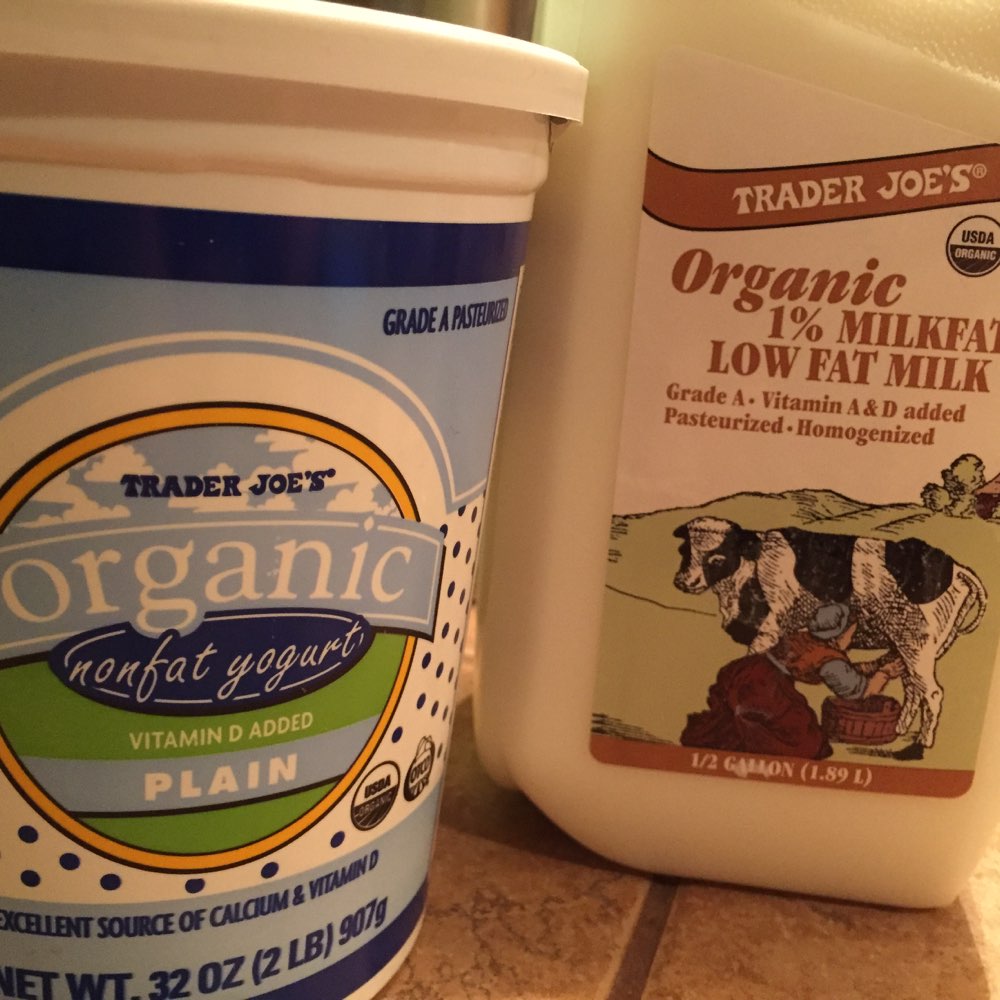 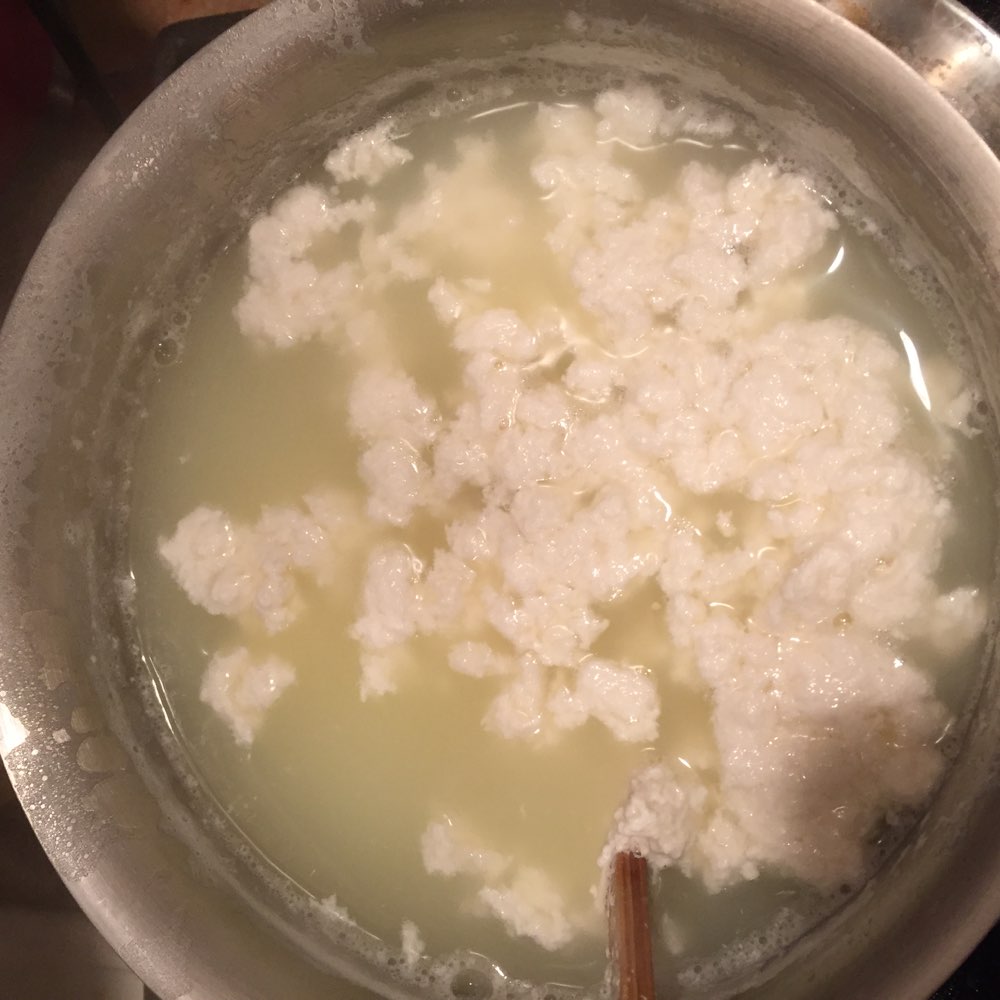 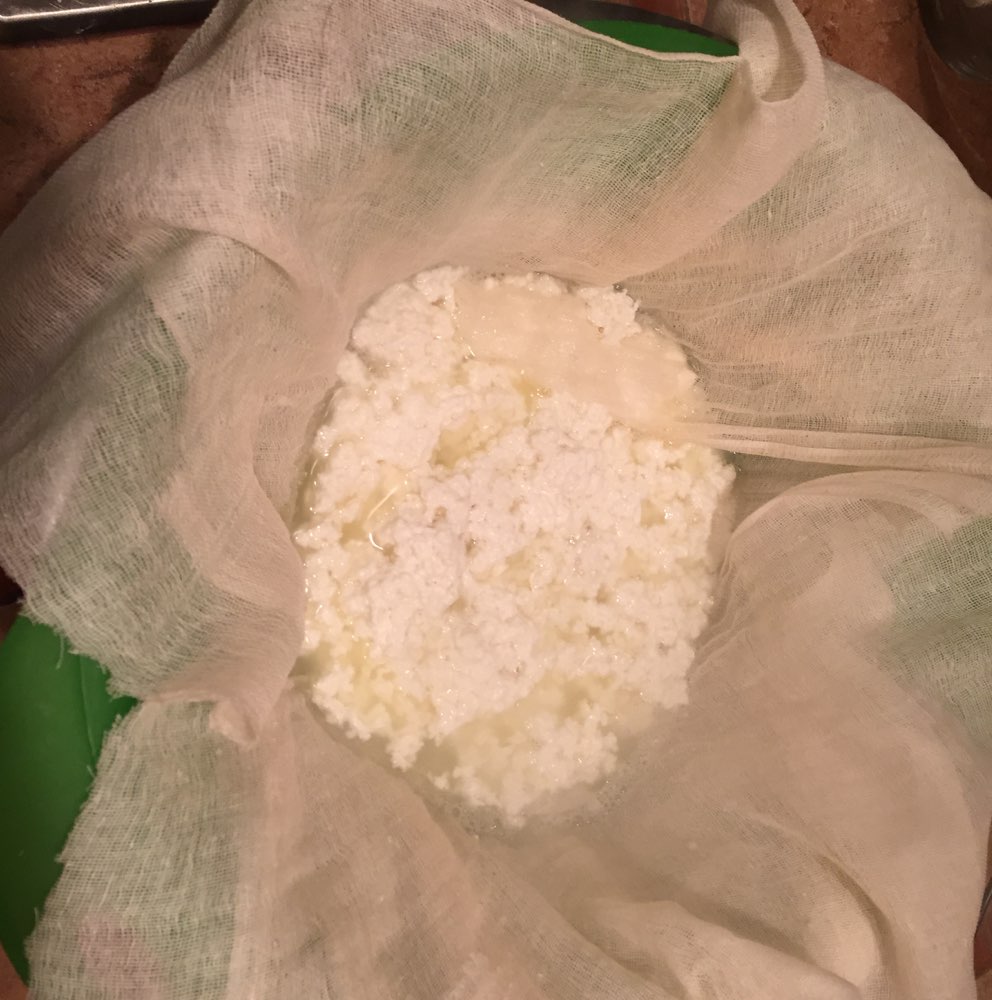 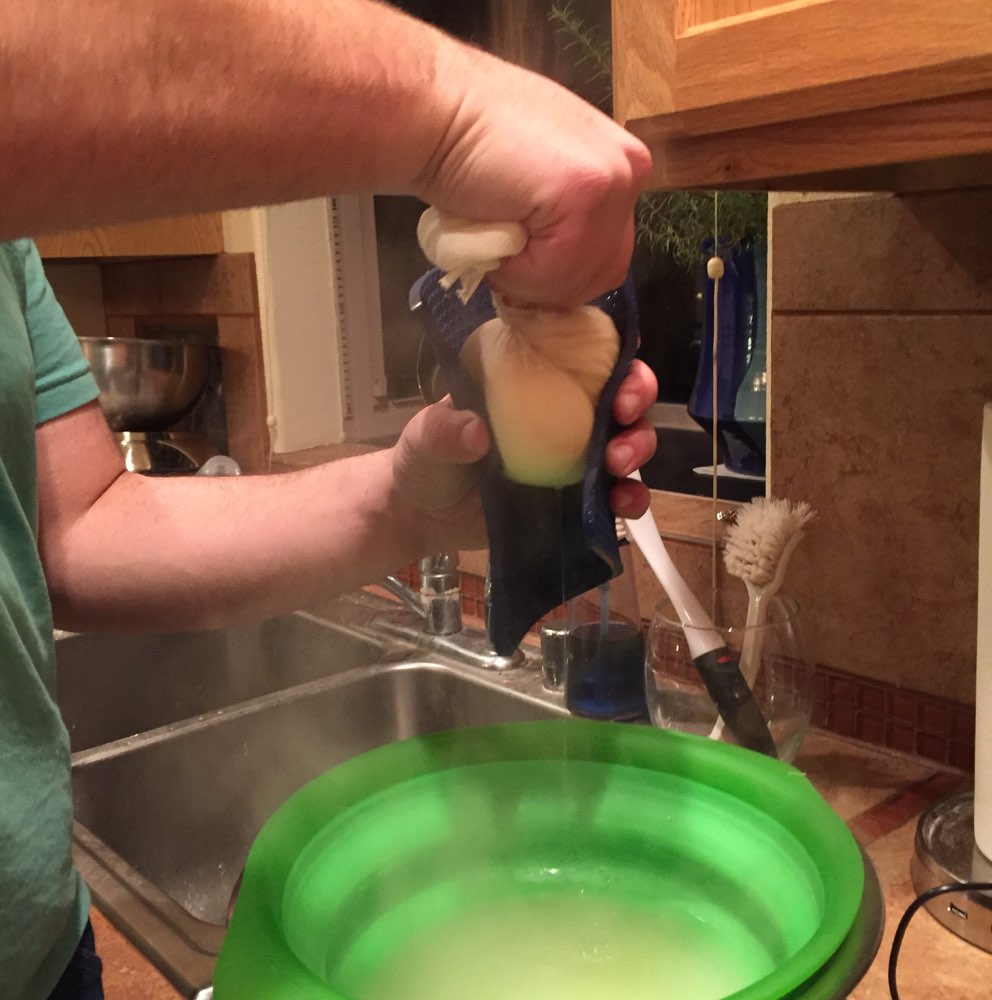 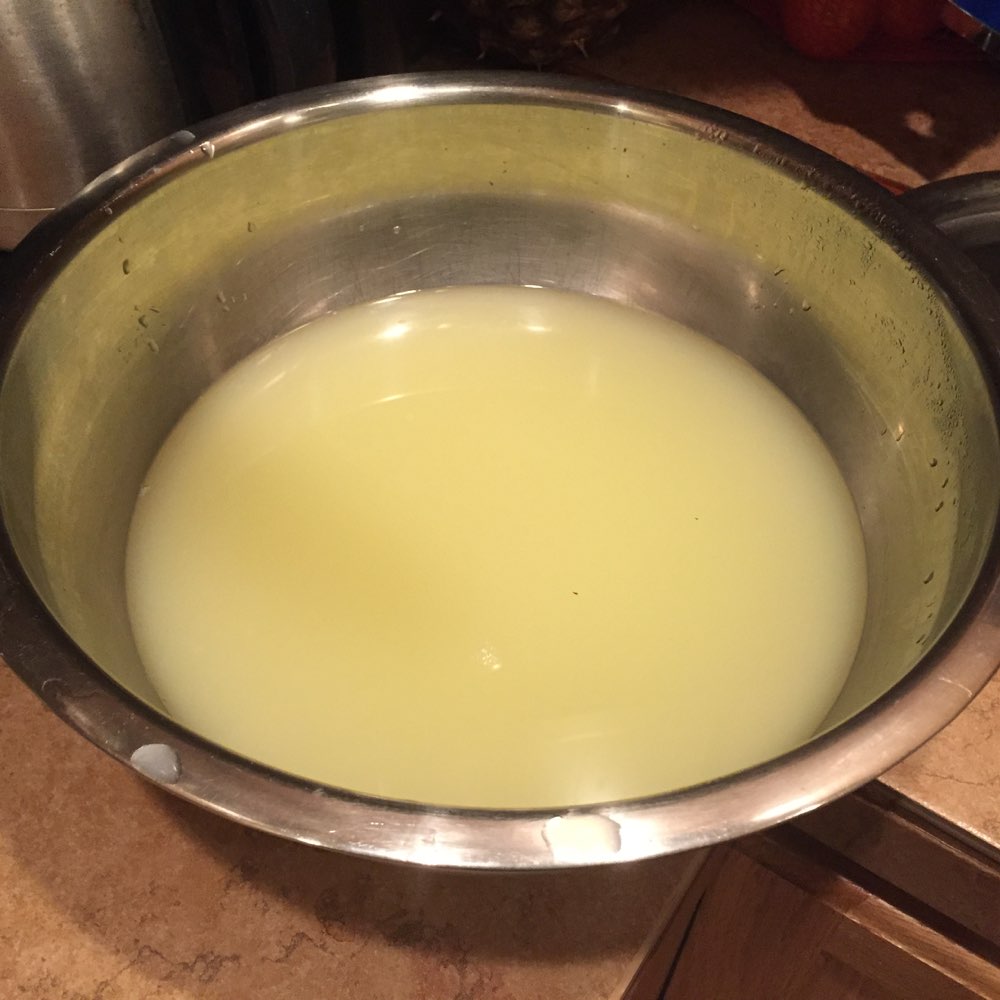 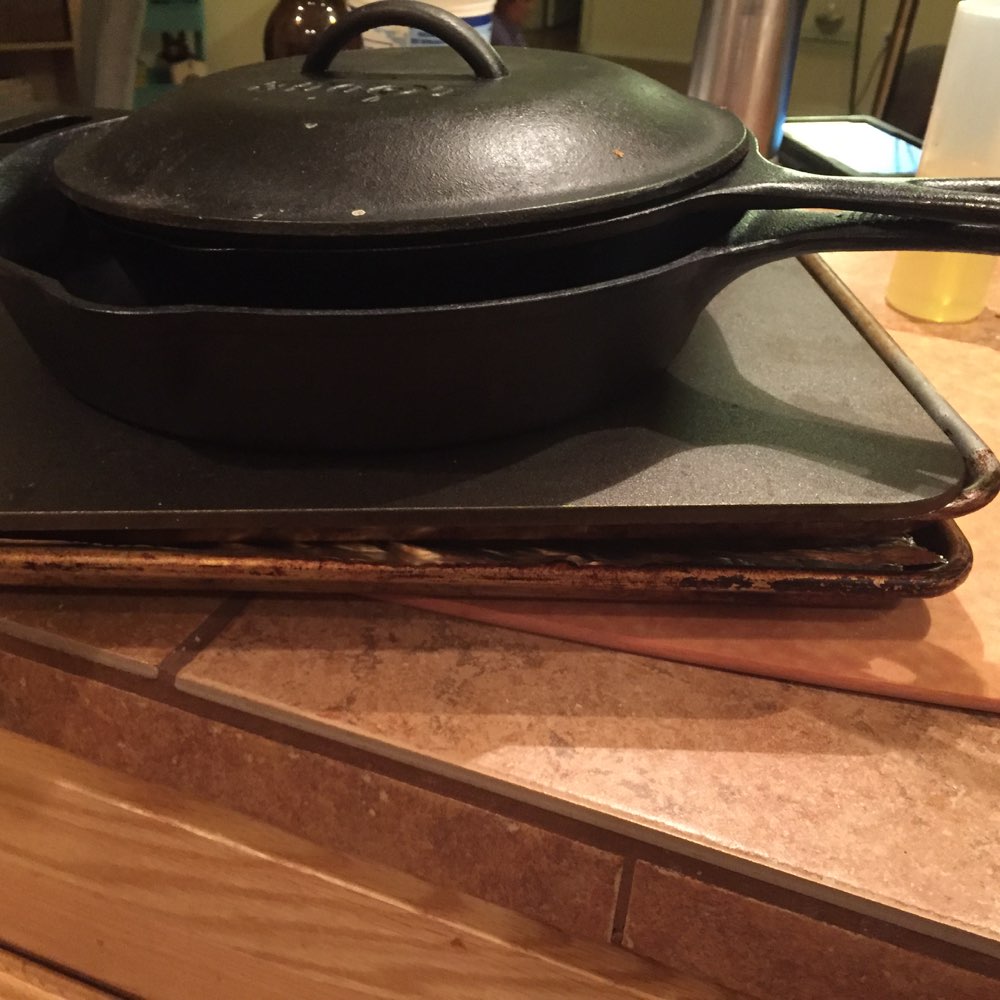 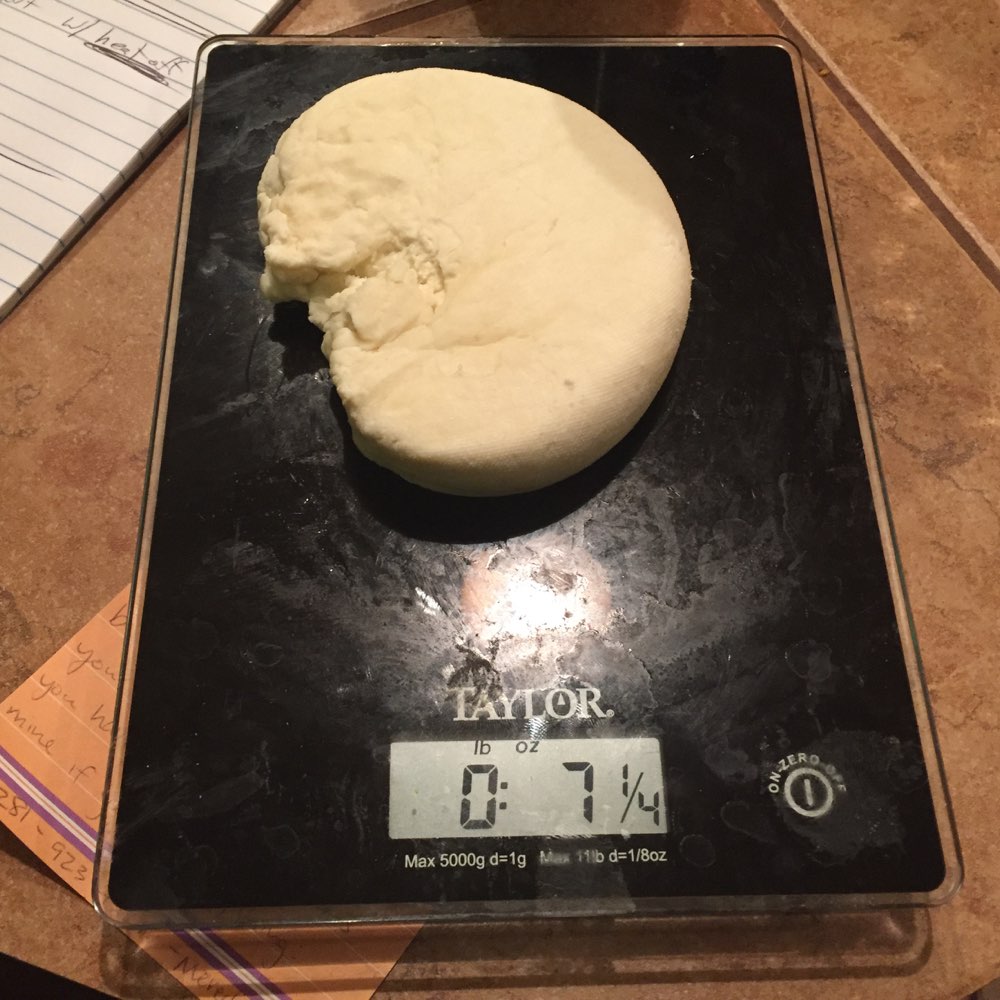 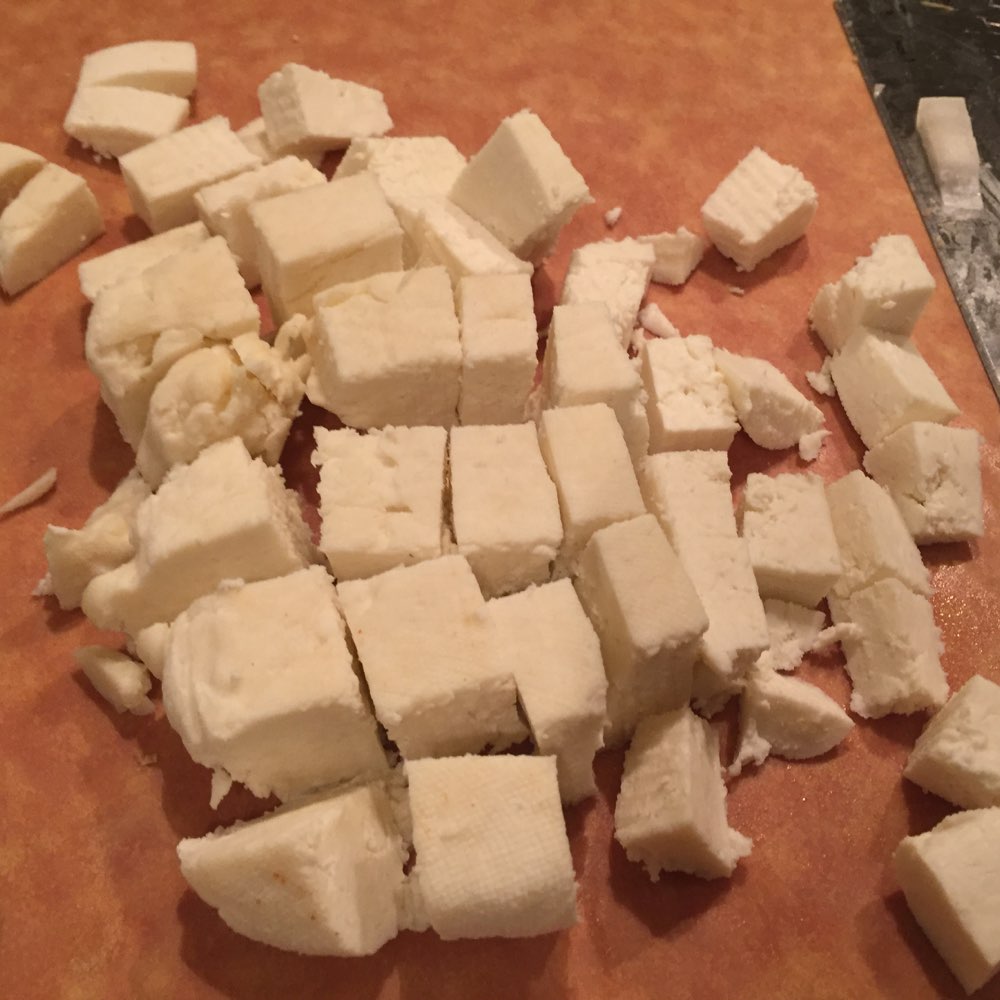 How to make [Organic and Fat Free] Paneer at home? (from Food for 7 Stages of life)
Local Copy (U: guest P: name of my dog, lower case) 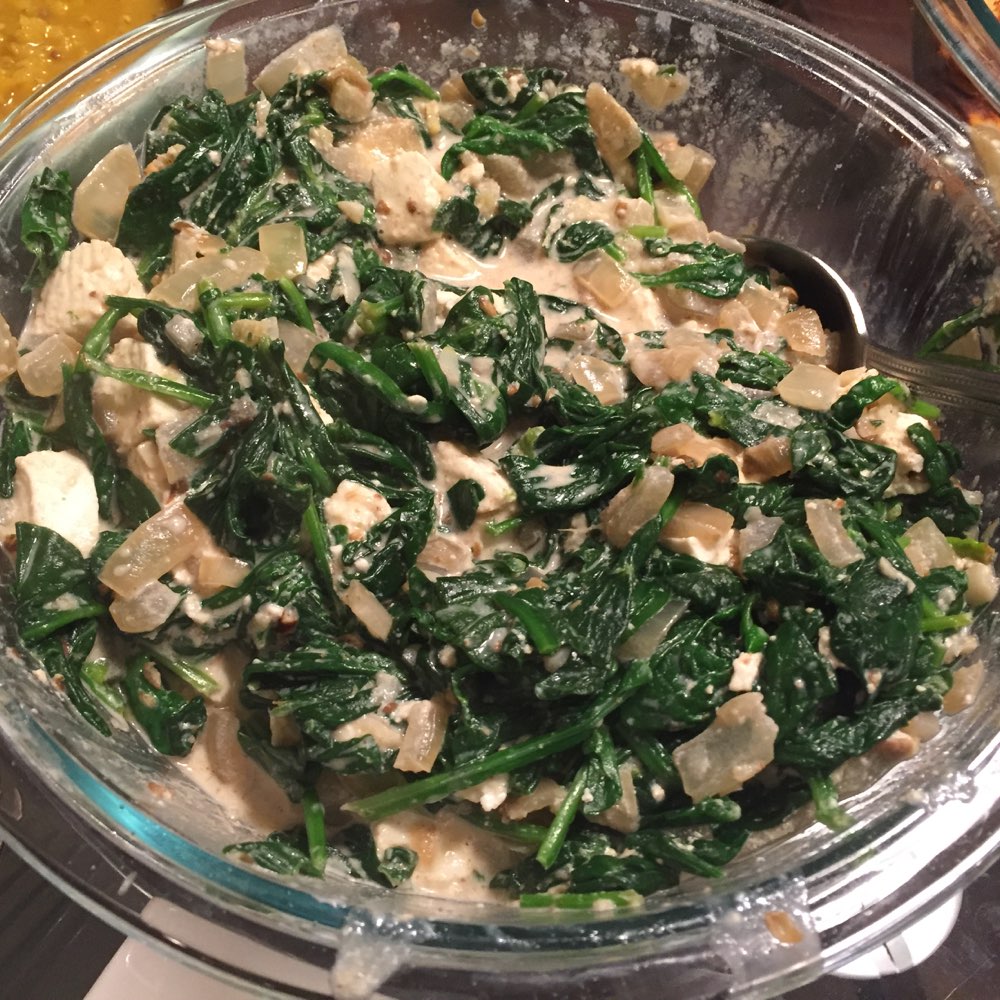 Again, we really struggled to find a recipe that didn’t call for (and seem to rely on) tomatoes. But eventually went with Vegetarian Times (Local).

We followed the recipe pretty closely except:

It worked out ok. Mostly tasted like sautéed spinach with a strong flavor of ginger and coriander. Essentially, like Indian sautéed spinach but not saag paneer. I think this is one of the recipes that really do benefit from heavy cream, etc. I do not know if I would attempt saag paneer again unless I am willing to use the cream.

We again struggled with the tomatoes, but eventually ended up with this Food.com recipe (Local) recipe. Actually, this was doubly difficult since we struggled to find vegetable (or vegetarian chicken) broth without tomatoes (see the photo below).

On the soup, we also stayed pretty true to the recipe except that we

We used all of the regular broth and half of the low sodium. It was pretty simple. Maybe a bit mushy but not bad. I think if we made this one again, we would go light on the cardamom. That flavor was a bit too strong. 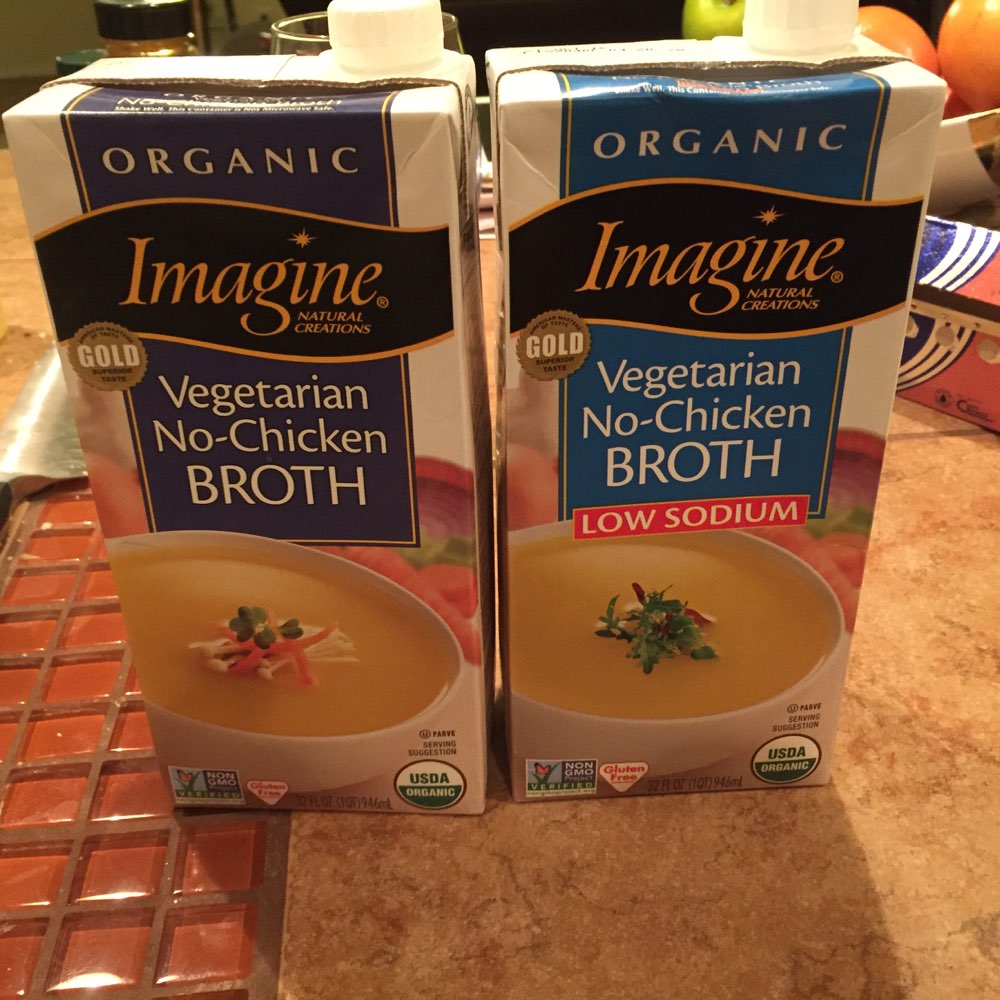 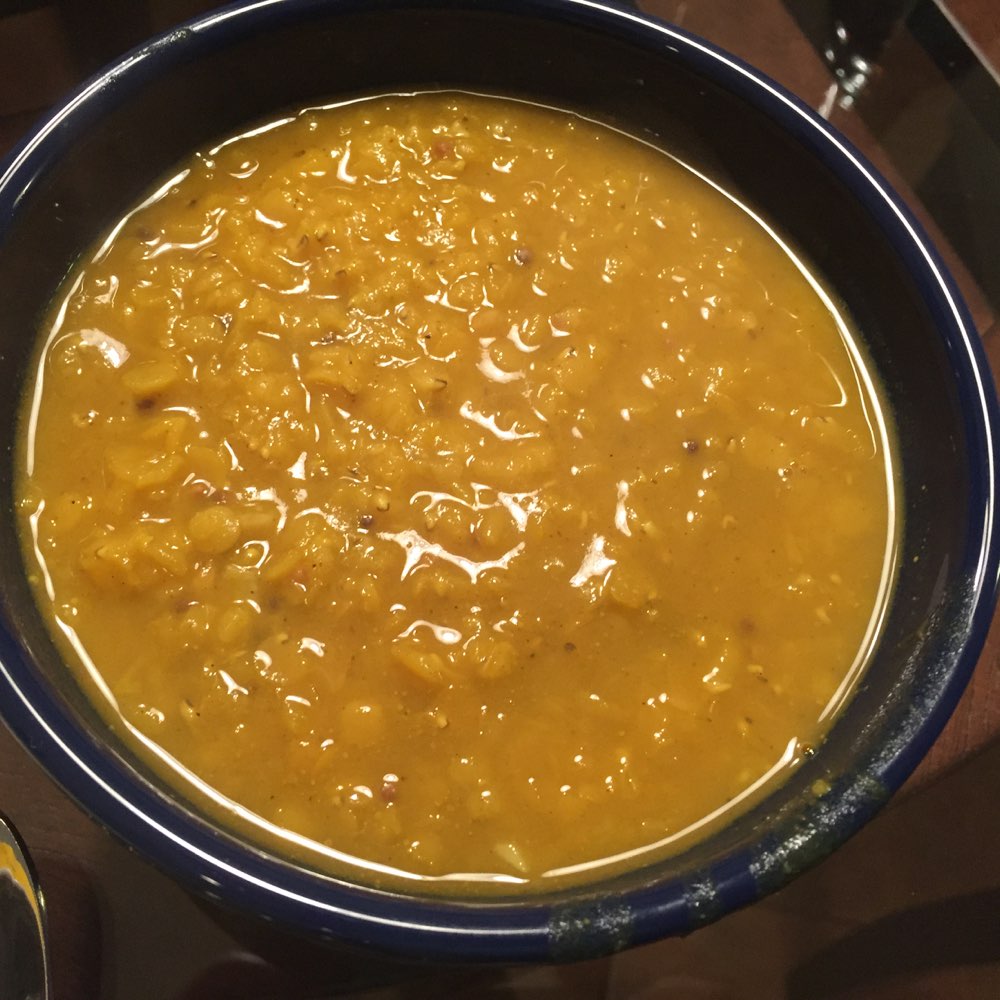 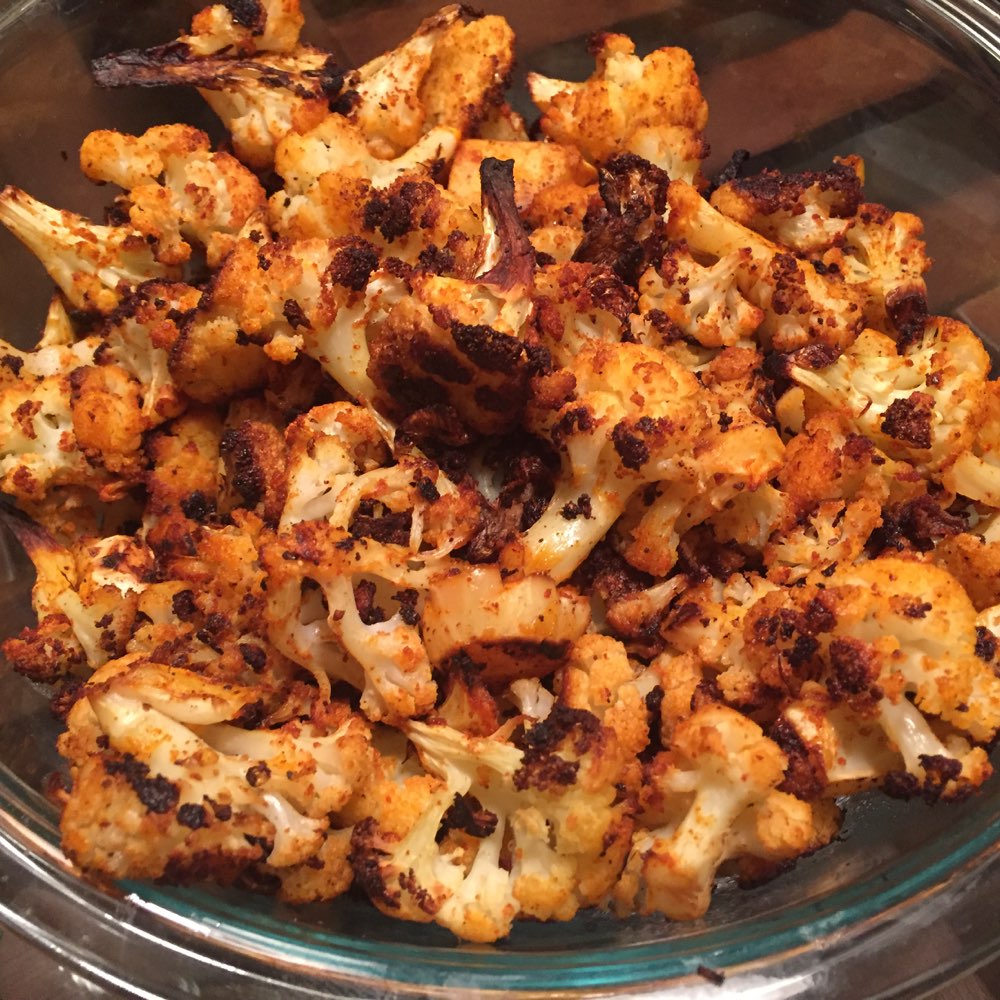 We did our regular Curry Roasted Cauliflower Recipe again with the Tandoor Chicken Masala (same as used on 2015-11-11). We made a ton of it. Probably 2.5 heads worth. It was so much that, for the first time, I didn't finish what was left.

Also, I do not know if we didn't need it before or used it and forgot to note it, but we didn't add salt and it was missed. Good otherwise. Nice char and, as usual, lots of flavor