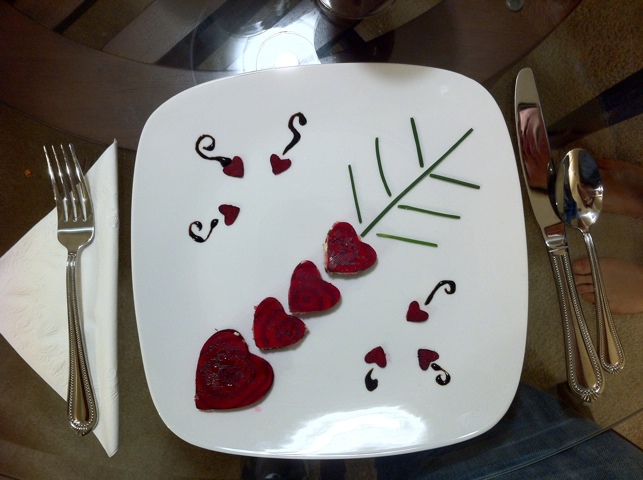 We were faced with a dilemma for Valtentine's Day. We didn't want to go out but we cook all the time so what makes it special. So, we decided to go a bit all out. We made a three course meal and cares less about calories, etc (though, the main course was not too bad). 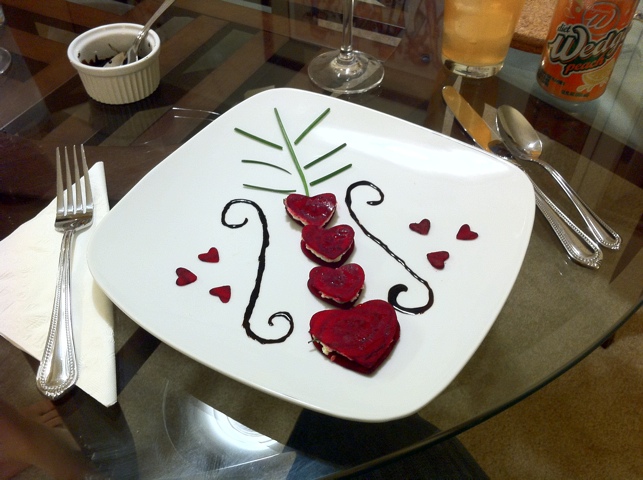 The idea for these was based on this Epicurios post but we based a filling from the recipe below. We quartered the cheese and halved the spices, except for garlic.We just minced it all together. Also, we skipped the walnut oil

Most notably with that is we made out own marscapone cheese. I do not remember the recipe for the cheese but it is heavy cream that is cooked then you add an acid. We used lemon juice. After sitting overnight draining, it thickened. Also we made a balsamic vinegar reduction. Again, I do not remember the recipe but you basically just reduce vinegar. Also, we did not use pine nuts

I should note that the cheese is not at all good for you, but we didn't need to use too much. We used 1/4 cup and had a lot of leftover.

The sandwiches were good. The beets did not have a huge amount of flavor but they looked really cool. The cupids arrow plate designs were Meredith. They looked good. 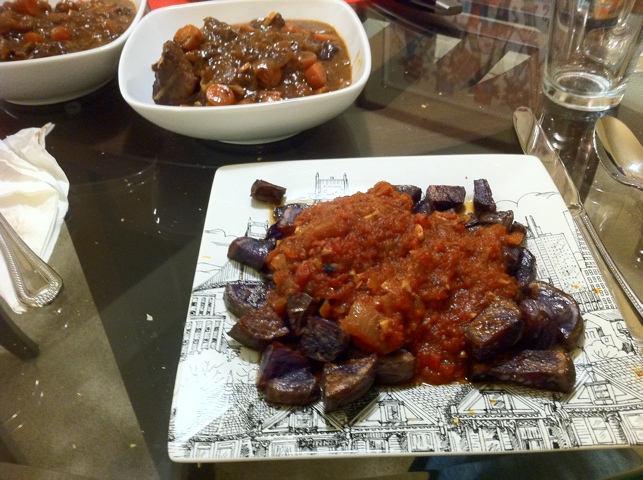 The beef was based on Ina Garten's recipe below. We followed it pretty closely except we halved it. Also, we used reduced fat, thick sliced, bacon instead of what they called for. And we used the more expensive, but more tender and less fatty sirloin steak. The only other change is we did not have the pearl onions. Also, we cooked it longer.

This was very, very good. It had a lot of flavor and we really enjoyed it. It took some time but was not overly difficult. We will definitely do this again. We bought really cheap red wine for it but it worked fine. One problem with putting the whole pan in the oven is when I took it back on the stove, I forgot it was in the oven, OUCH!

If we want to make it healthier, we may try turkey bacon. The thing is, surprisingly, turkey bacon and the reduced fat stuff have comparable nutrition information. But, based on the amount of fat left in the pan, I do not buy it. Oh well, it was worth it and not too bad.

The patatas bravas were just like last time. I again just threw it together. One interesting thing is I tasted the sauce and it didn't seem right. Meredith tried it and instantly identified that it needed the red wine vinegar. So, in the future, I need to make sure I remember that one. 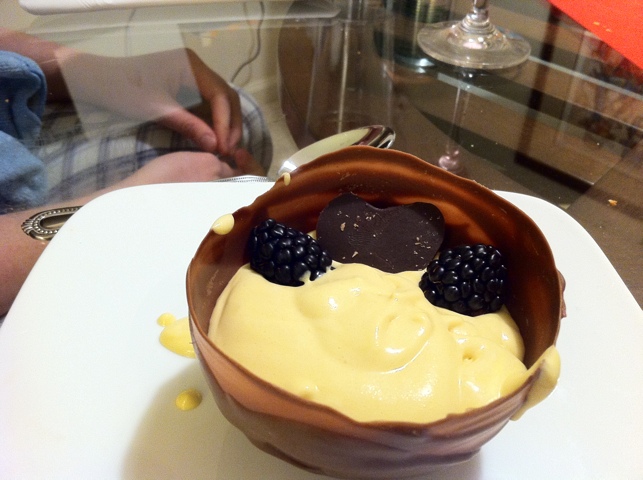 We made the zabaglione based off the recipe below but used kaluha instead of Grand Marnier. It was pretty good itself. We didn't want to make too much because it was all egg yolk but it was enough. We also served it cold so as to not melt the bowl.

The real star was the chocolate bowl. Meredith had originally wanted to make these as a surprise (and kicked me out of the apartment to do so) I ended up helping when she wasn't sure if it would work. I do not know where the recipe is from but it basically entails chocolate covering an air-filled water balloon. The thing to be careful about it not using the chocolate when it is too hot because it will pop the balloon. From our own experience, when that happens, it shoots chocolate everywhere. For better or for worse, we found that they chocolate stayed melted to pretty low temperatures.

Actually, we think that our problem may have been that we used too high quality of chocolate. It was too soft. It melted easily and was very sticky. Still it worked well enough well. The center of the bowl had a hole but on top of the plate, it was okay. I do not know if the hole was from removing the deflated balloon, which was not easy, or just there. Also, with the high quality chocolate, it was so rich that eating the bowl was a bit much. Next time, we will use junkier chocolate.

We served it with blackberries and a dark chocolate heart (also fashioned by us).

Marscapone Filling (From The Gilded Fork)
Local Copy -- password is the name of my dog, all lower case

Beef Bourguignon (From Ina Garten via The Food Network)
Local Copy -- password is the name of my dog, all lower case

Zabaglione (from Bon Appetit)
Local Copy -- password is the name of my dog, all lower case