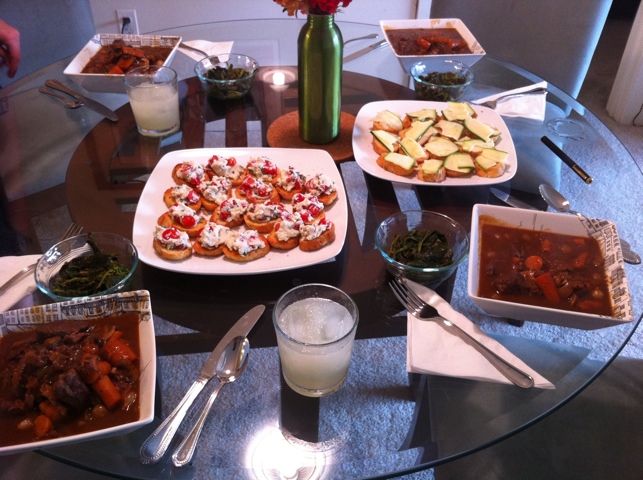 We had friends over for dinner and Meredith and I decided on a B theme.

First, the bruschetta. Meredith made two types from the recipes below. They were Mediterranean and Zucchini Ricotta. For both, we used fat free ricotta and we used a garlicparmesanbaguette toasted. Also light on the olive oil. They were both very, very good. We willdefinitelymake them again! Oh, and we skipped the olives (Yuk!!!)

The main course was beef bourguignon with the same recipe. We started it the night before and stopped right before adding the wine. Werefrigeratedit overnight and then we simply warmed it up and kept going from where we left off. It was good though I think I liked it the firsttimemore. It was less thick than previously. I do not imagine it had to do with breaking up the cooking but maybe. It was still flavorful and good.

The broccoli rabe was basically made with a recipe by Mario Batali. It simply involved sauteing garlic and crushed red pepper then adding thebroccolirabe and letting it cook for 20-25 minutes. First of all, I put too much pepper in. It was HOT. Also, maybe it was the cooking time or the method but it tasted a bit dead. It didn't have the nice bite and bitterness of just normally sauteed brocolli rabe (which may be a good thing to some people but I like the bitterness). Next time I will just do it like spinach.

Finally, the rice pudding. I do not have the recipe but Meredith said she followed a very basic fat free recipe. It called for honey but we replaces about 1/2 (Meredith- please confirm) with Splenda. Then she added her touches includes slivered almonds, raisins and cardamom. I liked it very much event though I am actually not a huge raisins-in-pudding fan. The cardamom was a nice touch giving it an indian flavor.