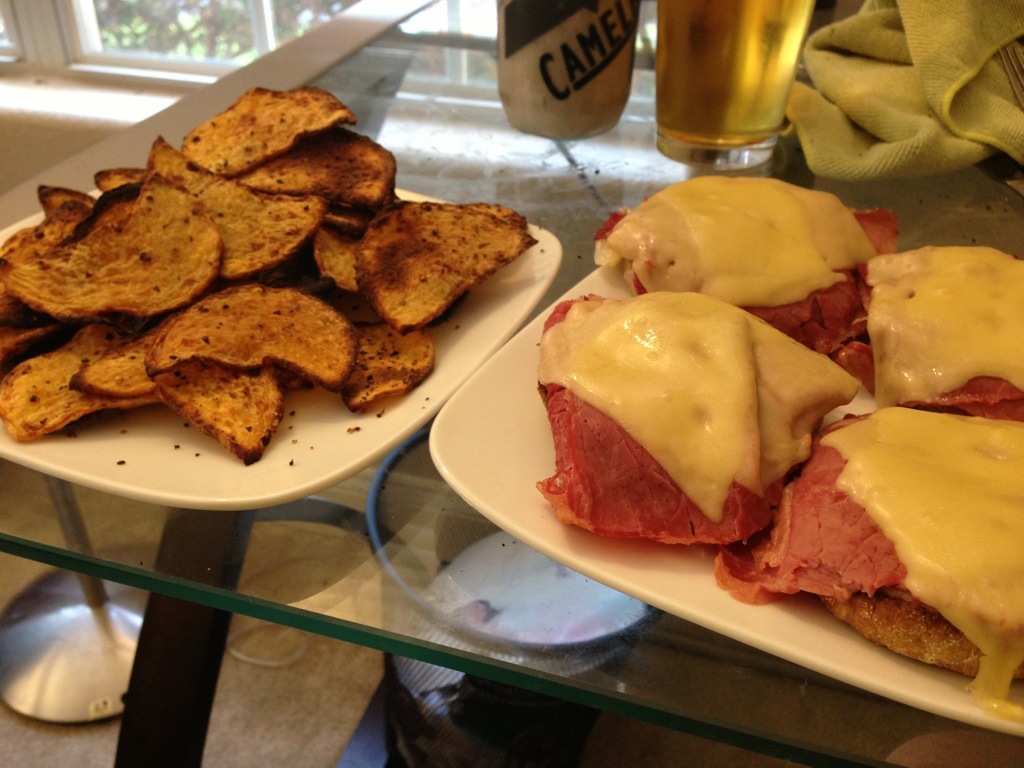 First, therutabagachips. I peeled and then quartered a bigrutabaga I sliced it into 3mm or 1.8" slices (the second from the smallest setting on my mandoline, also blue labeled). I then laid them on a tray (one with a silpat, one with non-stick aluminum foil). I pammed both sides and sprinkled them with salt and pepper. I cooked them for about 10 minutes at 375, flipped them and did 15 at 425. I then flipped them again and did about 10-15, again at 425 and took them out. The temperatures were inspired by this linkbut I thought they needed a higher temp. The oneson the aluminum foil got a bit crispier but came out less nice since they slid around a lot. I am not sure if I would go thinner next time or not. Either way, they worked out pretty well. Not very crispy, but then again, neither arepotatoes. Still, I think between rutabagasand/or turnips, I can stop usingpotato in many things.

I also made mini, open-faced almost-ruebens. The "almost" is because they didn't have rye so they are not, by definition, a reuben. I used Trader Joes whole grain english muffins (3 points each). I was originally going to just make two open-faced ones, but they were small and didn't need much meat. So I was able to make four! (actually, 8 but half are for lunch). For four of them, they had all of 1/4 lbs of corned beef and 2.5 oz lite jarlesburg cheese. So, a lot of food for not too many points. I woulddefinitelydo this again. And I liked doing "sandwiches" open-faced. It makes it seem like more food plus, you lessen the points form the carbs. Oh, and i used lite thousand island dressing