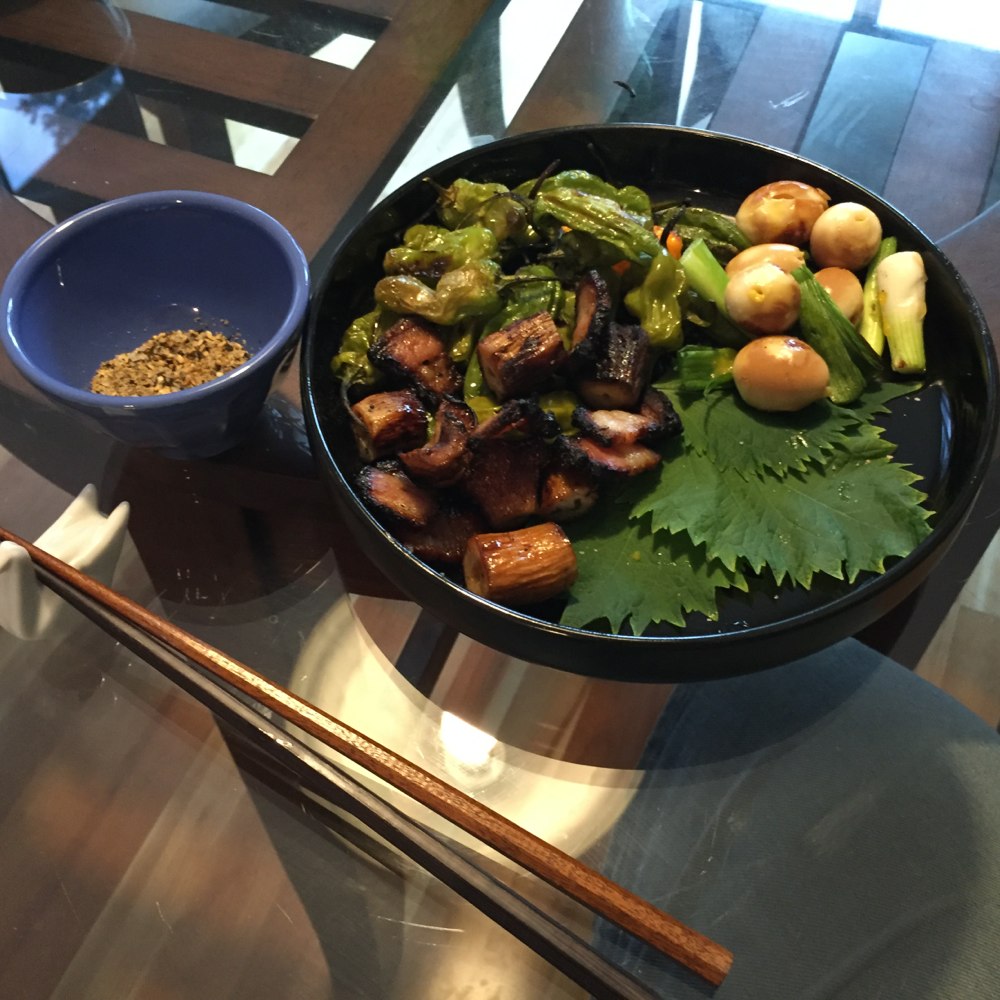 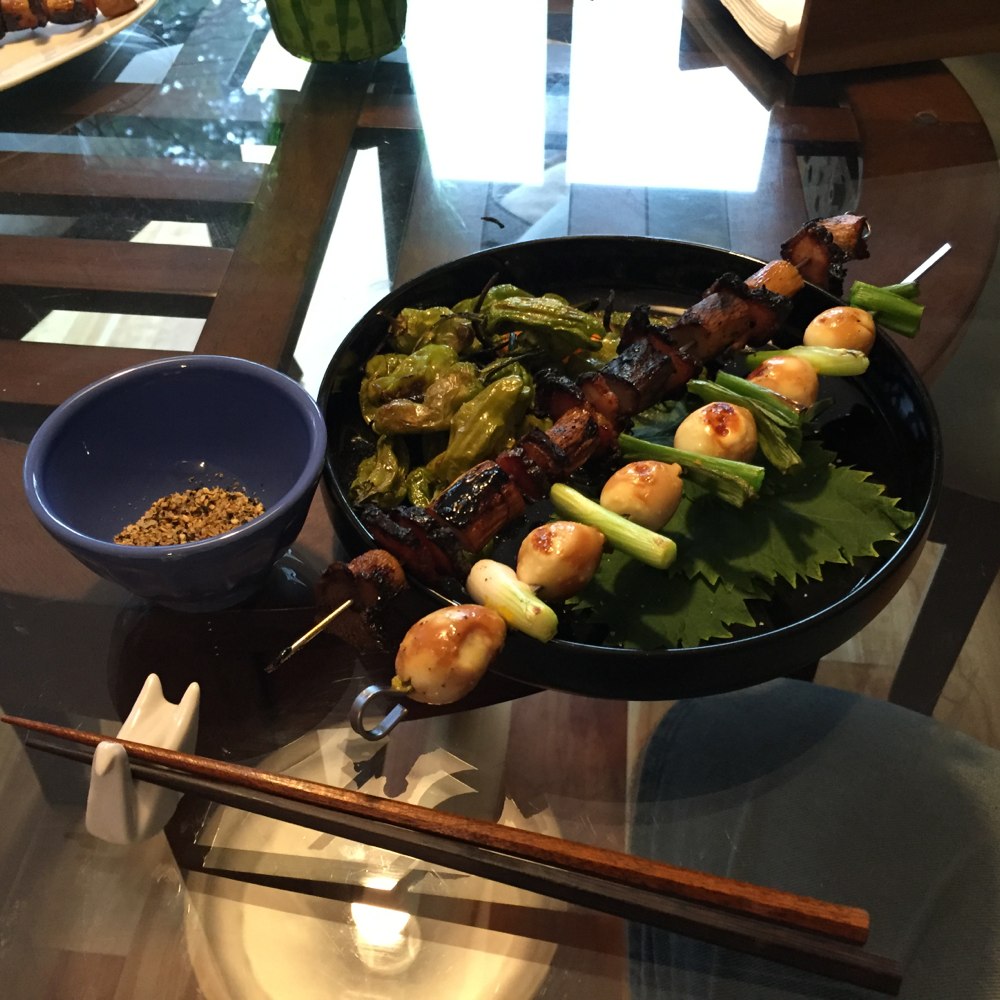 We had yakitori night. We had eaten a big lunch so we decided to go light for this meal (though certainly not really easy).

We used the Serious Eats Teriyaki Sauce recipe (Local) along with the suggestion from the mushroom recipe (see below but also copied on the local sauce page).

It was really easy to make. Just combine the ingredients and let it simmer. We did add some scallion, ginger, and garlic which seemed to work well.

The sauce itself came out flavorful but super sweet. It kind of makes sense for grilling where you get the caramelization, but I think we could still get that and cut it down.

We actually added some extra soy to try to cut down the sweetness a bit. Also, it made a ton extra so we'll use it at some point in the future. 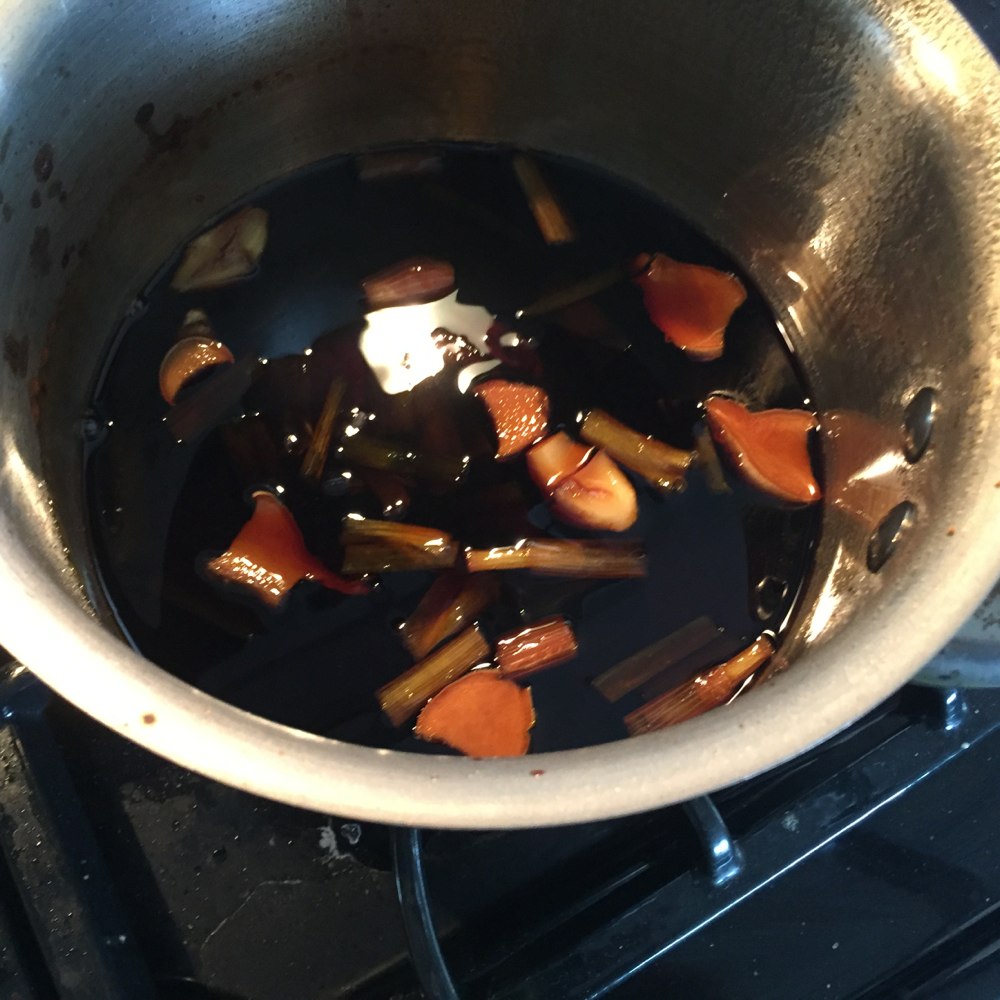 We followed the same recipe for quail eggs as 2016-04-20. As we noted then, we let it boil for a bit longer for 3 minutes. The hardest part of this recipe is trying to peel the little eggs. Meredith was able to do it better than I was. The eggs were pretty good. Could probably have used an additional day of marinating to infuse more.

We used the grill for them, but oiled the grates so they wouldn't stick. Also, we put some green onion on the skewers both for ascetics and flavor.

Also, Meredith actually made the sesame seed and salt thing to go along with it. That was very good and we used it for the peppers too!

Before turning in the marinade: 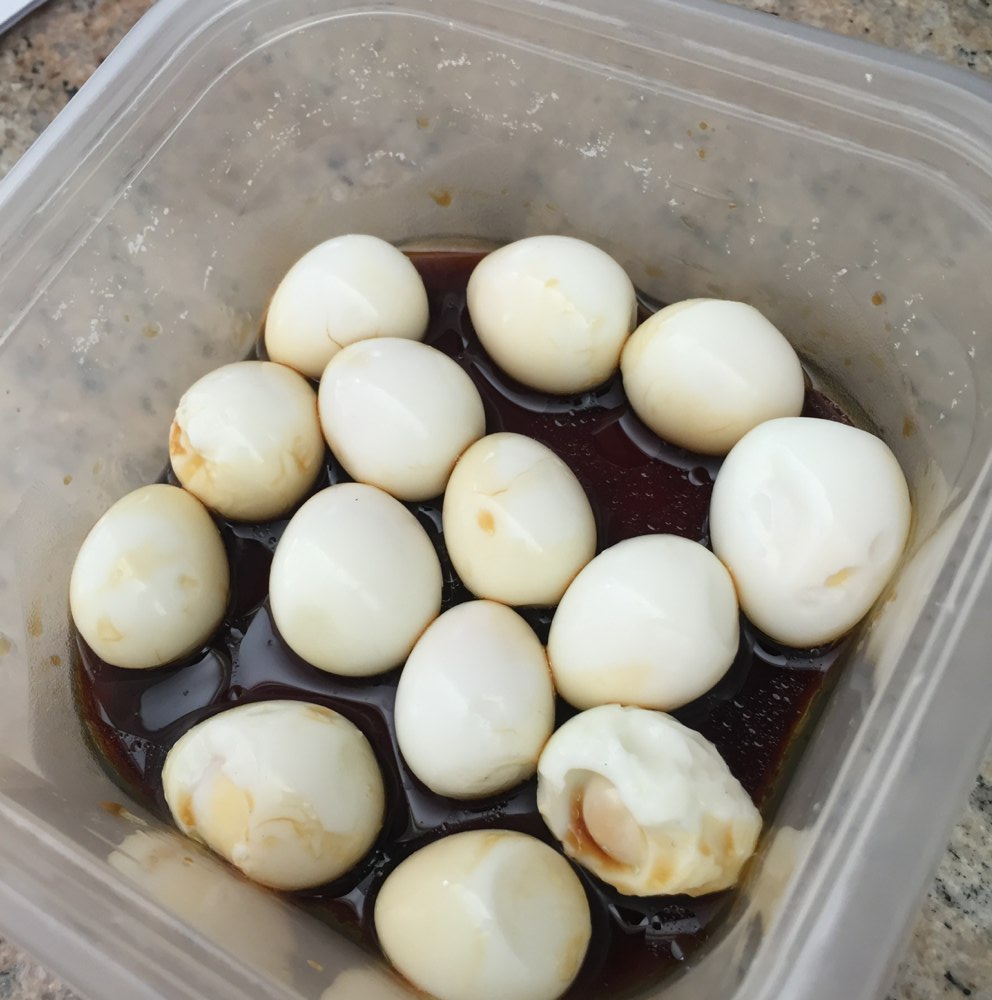 Again following Serious Eats' lead, we made shishito. (No local copy since I really didn't do much).

We used the grilling basket for them which kind of worked. I do not like that you can't close the lid or that they don't all get to touch the grates, but it did make this easier. We just used salt (not enough) and then glazed it (or tried to) at the end with the teriyaki. These peppers were small and not as good. We haven't had much luck with them in Albuquerque. 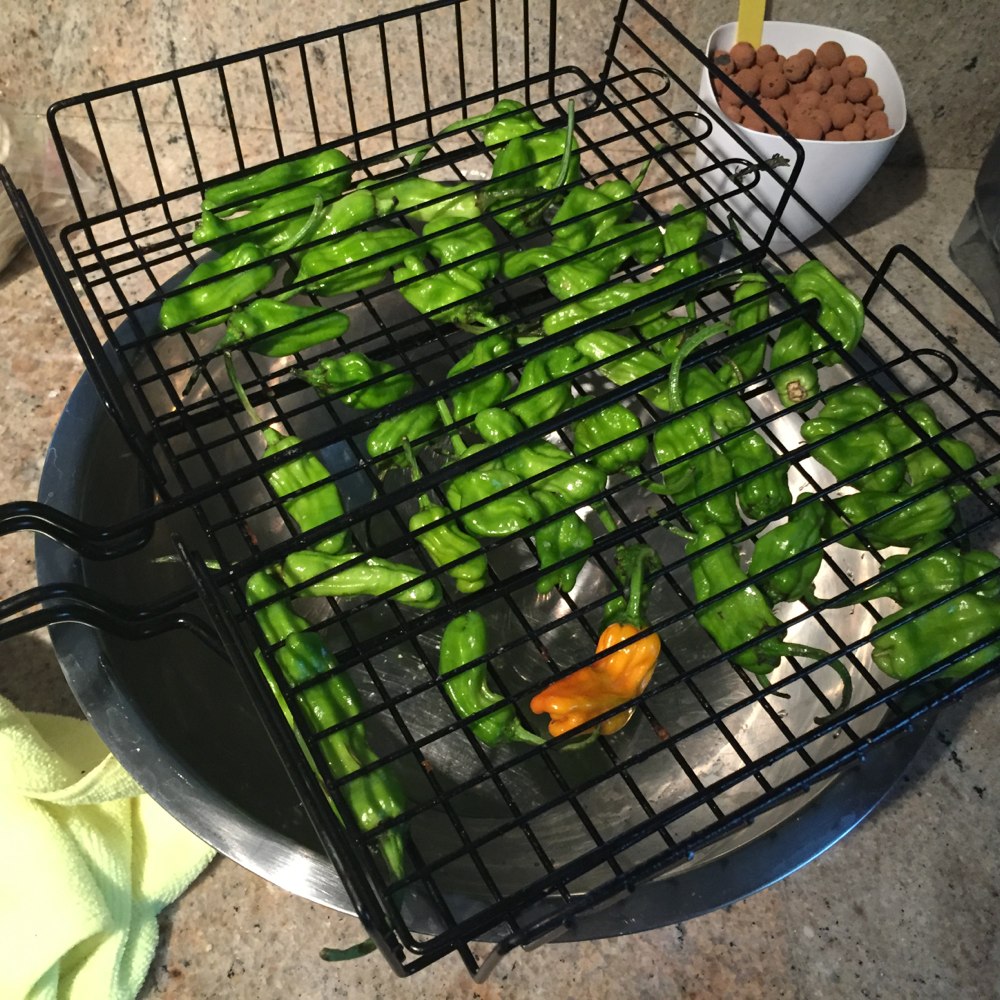 We followed the Serious Eats Recipe (Local) recipe for the mushrooms. We used Whole Foods house-smoked Green Chile Bacon. I think we grilled ours a bit too hot and/or too long since it was a bit charred. I also do not know why our sauce didn't stick as much (should it have been thicker)?

But I do think the mushrooms did a good job absorbing a lot of the flavors from the bacon. Also, the grill did smoke a good bit as the fat dripped off but I think that adds to the flavor. 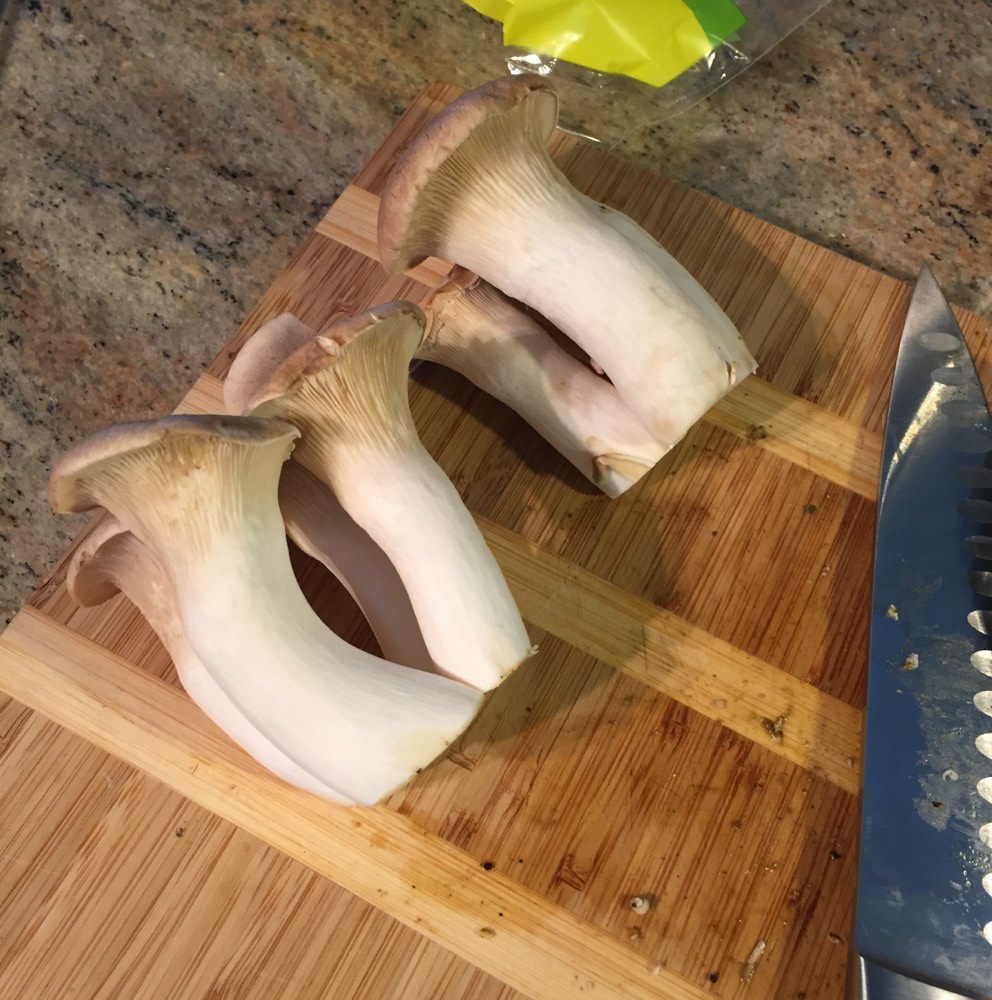 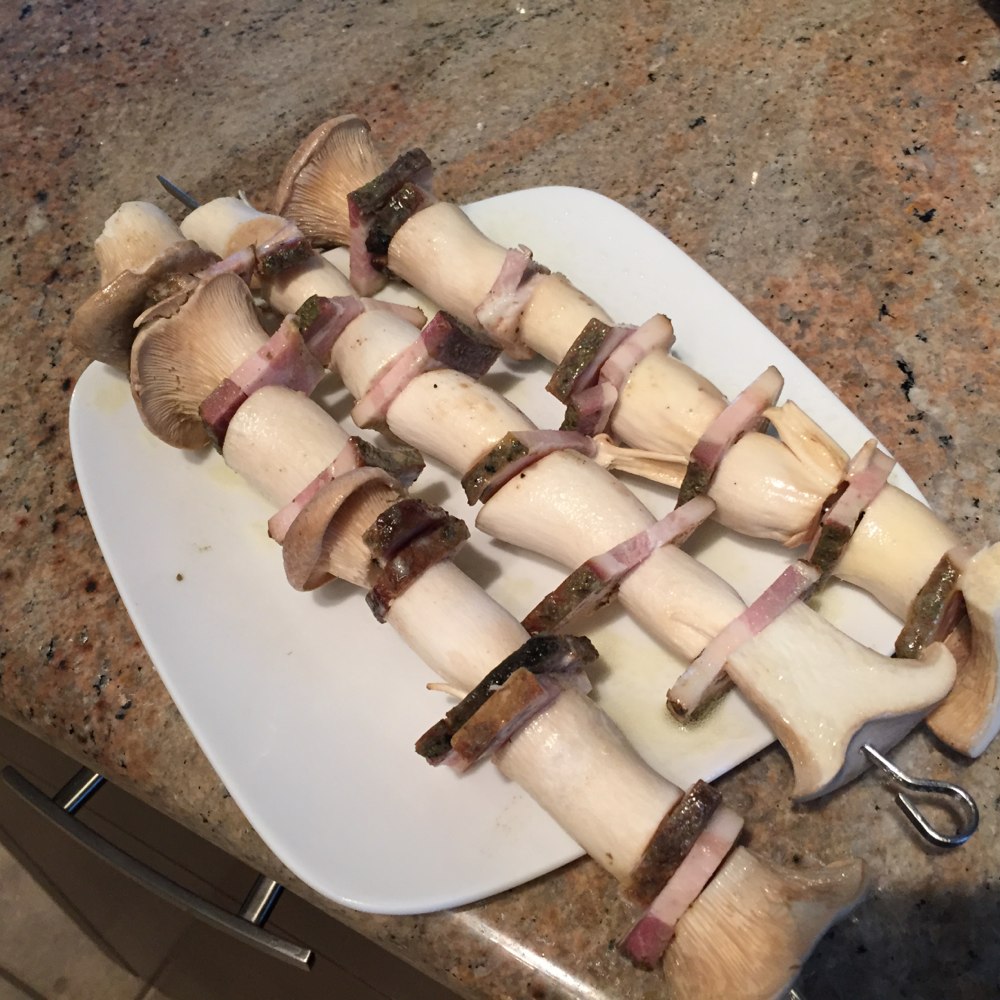 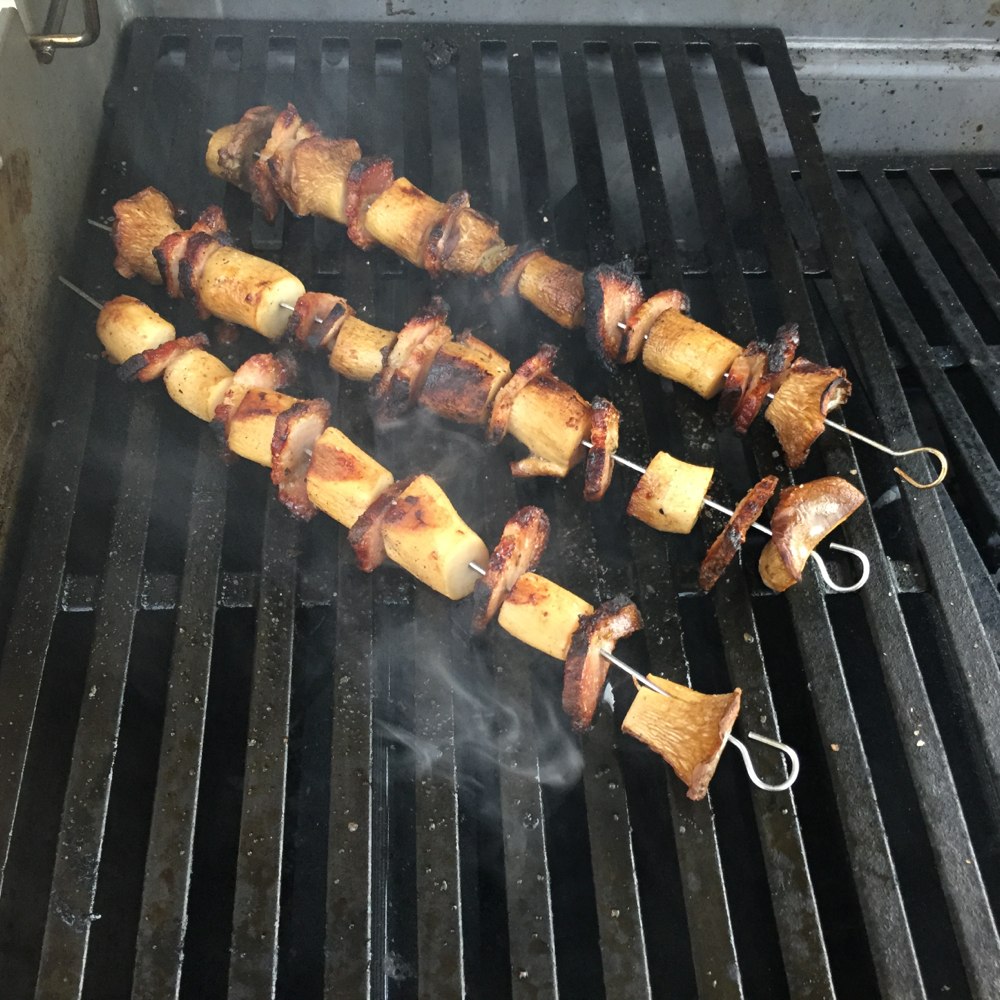