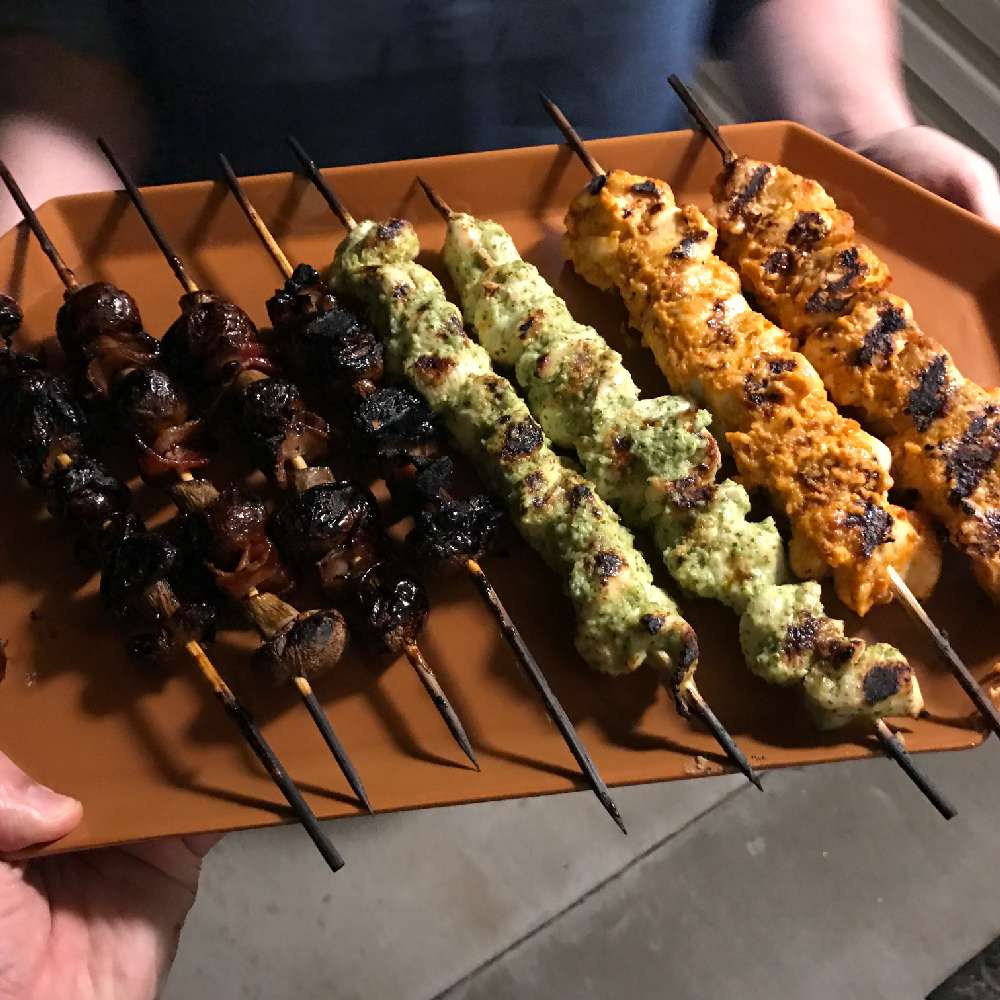 My friends Wes and Katie were visiting ABQ and come over for dinner. We made two types of chicken skewers and also teriyaki mushrooms.

The chicken skewers were from Zahav (scanned here). It was part of their "Pargiyot Three Ways" though we only did two. For the "onion marinade" (they both have the same amount of onion but whatever), we followed the recipe pretty directly. For the harissa one, we did follow the recipe but used a tomato-based harissa (see below).

I tried to do a more Japanese style of skewering. I butterflied the chicken and then also pounded it thin. I cut it into smallish pieces and basically folded every piece as I put it on and packed it tight. According to Serious Eats, this helps to keep them from drying out. I also just think it looked good and gave some more texture.

Anyway, the chicken was marinated for a few hours and was really flavorful. I put on more sauce at the end before the last turn. They came out really good. The onion one was a bit lemony but not bad. I liked the harissa one a lot too! And the onions in both smelled really good while it was cooking.

Finally, I also made yakitori mushrooms as we did last time. Except I used regular mushrooms with 4 per skewer and a total of 1 slice of [center cut] bacon per skewer (basically a third). Like the chicken, I tried to also fold them up as I put them on. It worked really well. I was a bit unsure about the teriyaki (which I also made myself with some ginger an garlic) because it came out too thick. But heating it a bit helped. And it did end up giving it enough flavor. The bacon again gave a lot of flavor to the mushrooms.

Meredith and I used to really like the Harissa at Cava in Northern Virginia. She was working on it at one at one time but it was complicated and a lot of work.

Well, she found this article and recipe (LOCAL recipe1 -- now My Recipe Book). It seemed too good to be true. Especially since the ingredients on the package are:

and this one just calls for tomato paste instead of stewed tomatoes. And it just seemed too easy. But it actually worked really well. It had some crunchiness from the not-fully-ground crushed red pepper but was pretty spot on...at least to our memory. I think we would make this and keep it around. Especially it was so easy! (and the recipe does seem to come right from them!). Maybe next time, I will grind up the crushed red pepper in a spice grinder first. 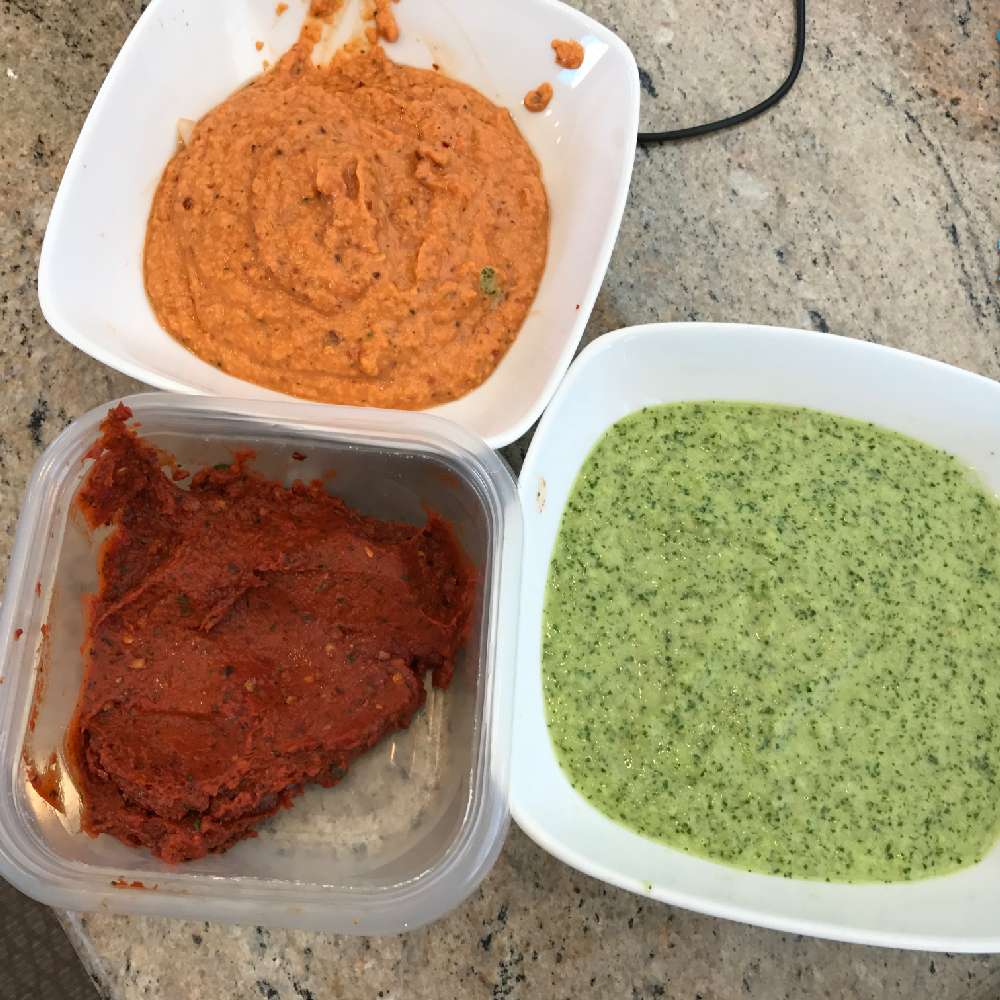 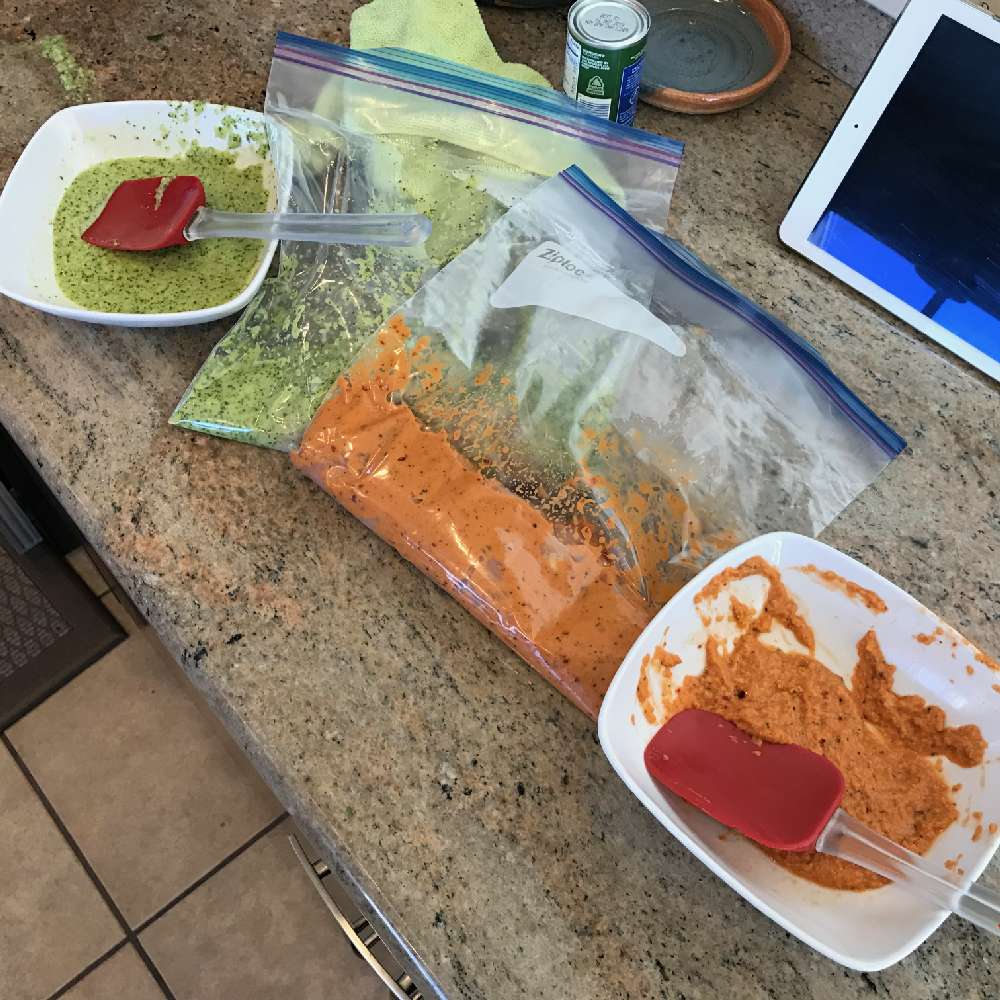 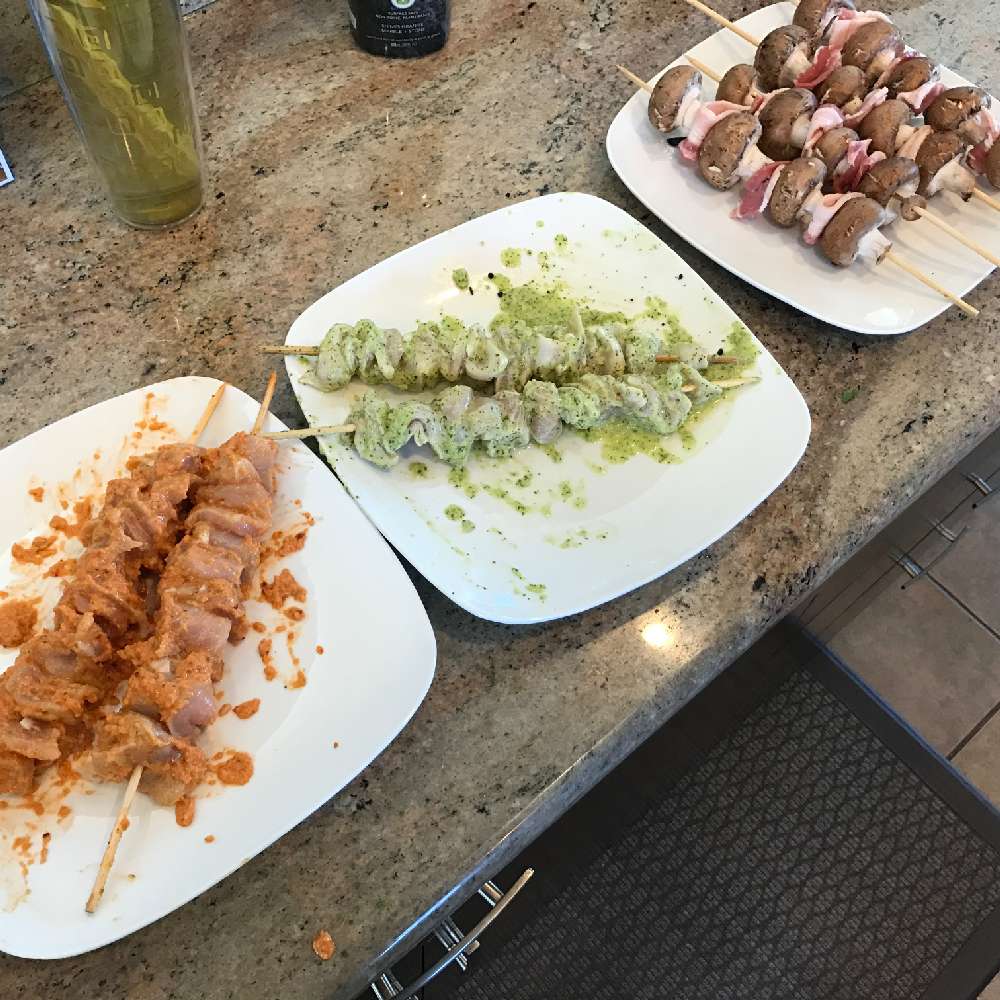 When Meredith was in Durham at Burger Bach, she had a very flavorful, herb-centric salad and decided to make something like it.

She was inspired by Good House Keeping's recipe (LOCAL1) but added a ton of thyme and oregano. We basically did most of it by eye adding more oil, and then some water, as needed.

Our friends made dessert of a strawberry short cake. It was home made whipped cream with macerated strawberries and some Angel's Food Cake 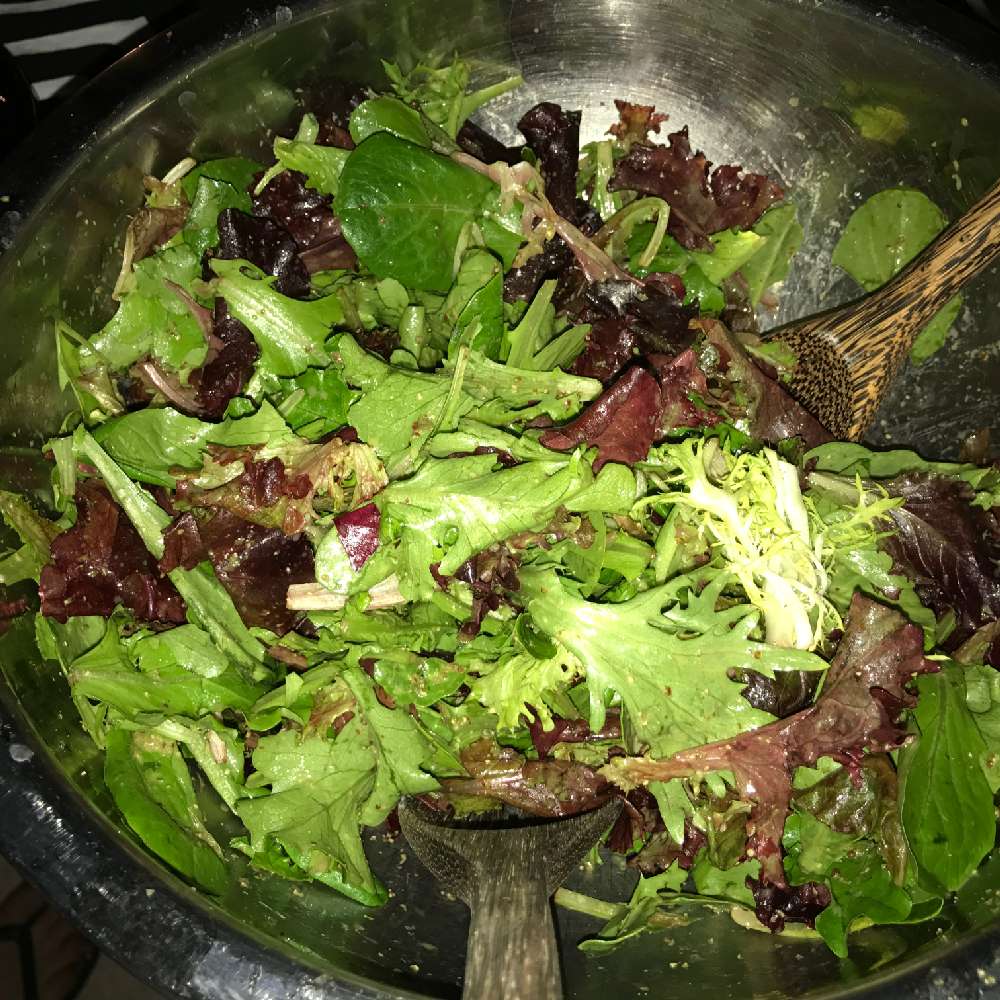 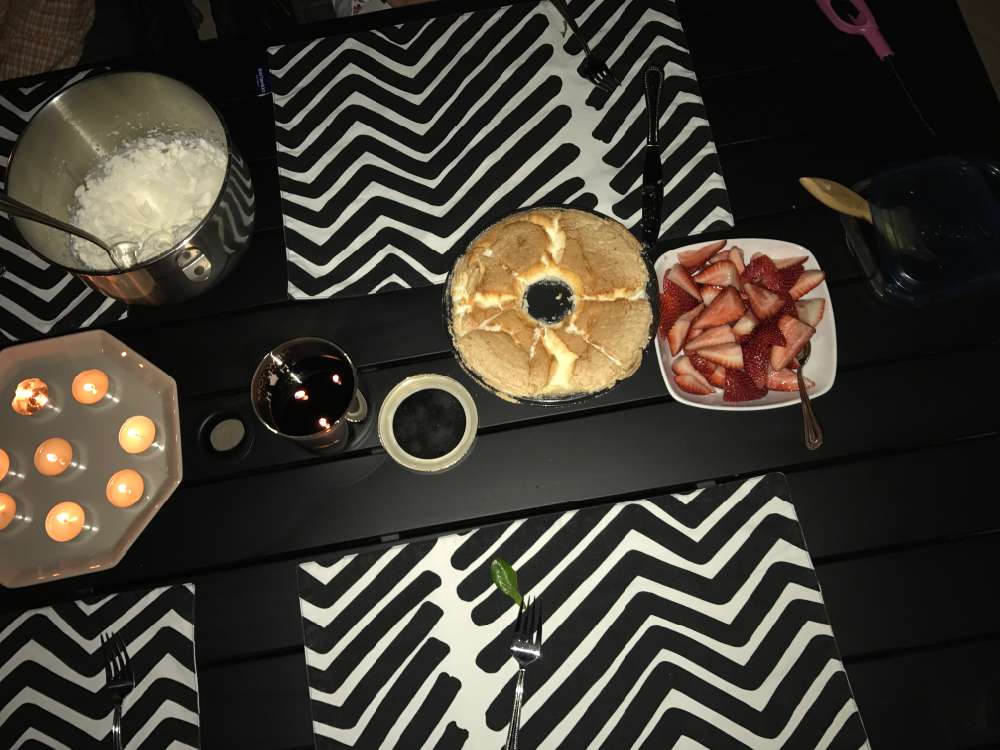