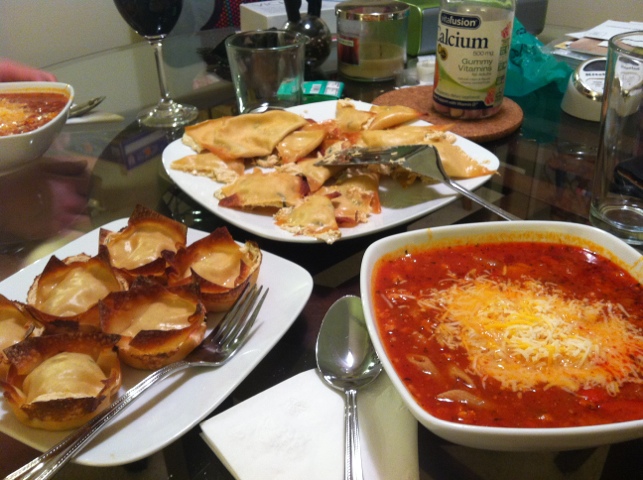 I am writing this up much after the fact so I do not remember all of the details. But, I will try anyway. We made crab Rangoon (baked) from a combination of recipes. We basically, mixed some fat free cream cheese, some low fat mayo (very little), some garlic and onion powder, some worcestershire, green onion and (obviously) crab. We tried two different methods. The first was folded over with some crab mix. It didn't work very well. Most leaked and you couldn't put much in. The second method was to use the muffin tin. We put a wrapper down, some crab mix, and then another layer. We baked them (I forget how long or at what temp) but basically until they were crispy. They were okay. Not incredible. It was nice how low point they were (especially compared to the fried, full fat version). The second method worked better since it didn't leak everywhere.

We also made Lasagna soup again with chicken sausage. We didn't use spinach like Meredith did last time. We also didn't have basil. I am not sure what else we changed since Meredith made it last time. It was good though not as good.