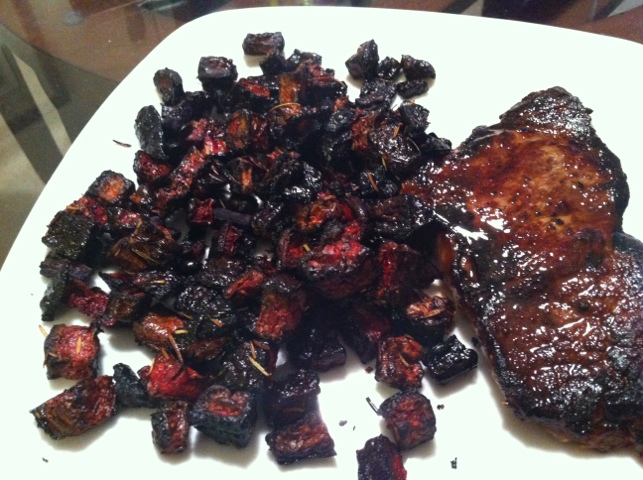 This was not a verysuccessfulmeal. My goal was to make a good (but small) steak and some roasted beets. I let the beets roast for a while, maybe 40 minutes at 450. That may have been too much, but was going well. Then I tried to cook the steak like I did before. I bought a small (8 oz) NY strip steak. I put it on a really, really, really hot cast iron pan. It started pumping the apartment with smoke, but I kept going. Then, I threw it into the oven after the flip. This pumped the oven full of smoke, but also added a lot of heat to the oven, and being that the pan was very hot, it probably added a lot of radiant heat.

Well, in the time it was in the oven, the steak got a bit overcooked, but the beets BURNED. They tastedawful. Even the ones that were less burned tasted like smoke, The steak was okay, but a bit overcooked and not all that good (even though I let it sit to reabsorb juices, etc). Also, the apartment had a 4 footvisibilityfrom the smoke. Once it started smoking, I took off the fire alarm so that was one less thing to worry about.