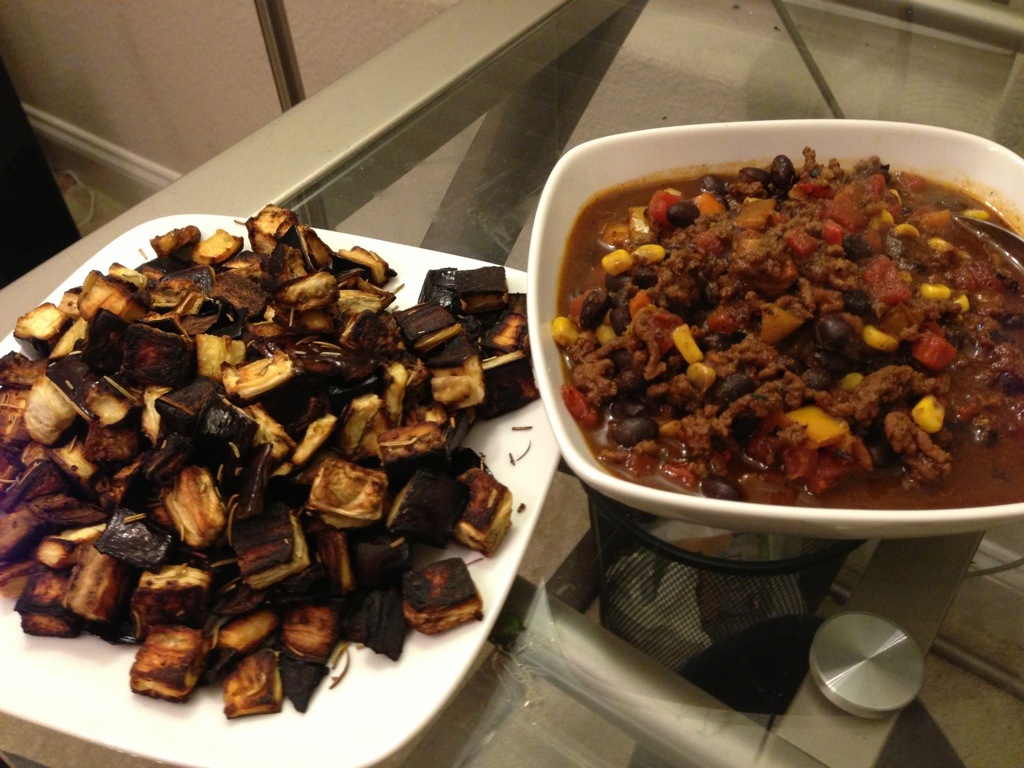 I followed the recipe below and I actually did a pretty good job sticking with it. I roughly halved it. I used 2/3 lbs extra lean beef. Rather than use half a bell pepper, I actually used two (as the extra vegetables). I also 5 Birds Eye Chili and one small dried bhut jolokia. THat was all it needed to make the whole apartment nearly toxic. I spent quite a bit of time coughing to it. Instead of salt, I used extra Better Than Bouillon in the broth. For the seasonings, I used chili powder, cumin, garlic powder and oregano. I didn't really measure it but it was probably more than it called for.

I kept adding extra beer as needed to keep it moist. Probably a bit over had a bottle by the end. I cooked it for about 30-40 minutes before adding the tomatoes, beans and 1/2 cup of corn.

It was very, very good. Spicy from the peppers but a lot of flavor. Maybe a bit dry for chili but not really too bad. It made two big bowls (one dinner; one lunch). I would definitely make this again.

I also made roasted eggplant. I cubed a big eggplant, sprinkled it with a bit of olive oils, salt and lots of rosemary. I roasted it for 20 minutes at 400; tossed it and then another 20 but at 425. They were cooked nicely they were pretty good. Maybe a bit dry but that was fine. It was rather easy to make and I would do it again.

Points Plus for the chili:

How To Make a Very Good Chili (From The Kitchn)

1. Brown the meat. If using meat, warm a teaspoon of oil in a large heavy Dutch oven or soup pot over medium heat and brown the meat. Break up ground meat as it browns, leaving pieces as large or small as you like them. If you're using chuck roast, make sure all sides of the beef cubes are seared dark brown. Transfer the browned meat from the pot to a clean dish.

If you're making a vegetarian chili with tofu or other protein, add it along with the beans in Step 6. Reduce the amount of stock and the cooking time by half.

2. Cook the vegetables. In the same pot used to brown the meat, warm a tablespoon of oil over medium to medium-high heat. Add the onions and cook until softened and translucent, about 5 minutes. Add the other vegetables and continue to cook until softened, another 5-8 minutes. Clear a space in the middle of the pan and add the garlic. Cook the garlic until fragrant, about 30 seconds, then stir into the vegetables. It's normal for a dark sticky crust to start forming on the bottom of the pan.

4. Deglaze the pan. Pour the beer or wine into the hot pan. Scrape up the dark sticky crust as the liquid bubbles. Continue scraping and stirring until the beer or wine has almost evaporated.

5. Add the broth and simmer. Add the browned meat back into the pan. Pour in the broth. Bring the chili to a simmer and cook for 45-60 minutes, stirring occasionally, until the meat has is very tender (cubes of chuck roast may take a bit longer). The chili will still look soupy.

7. Serve with garnishes. Chili is often best the day after it's been cooked. It will also keep for up to a week and freezes well for up to three months. Serve with cheese and other garnishes.