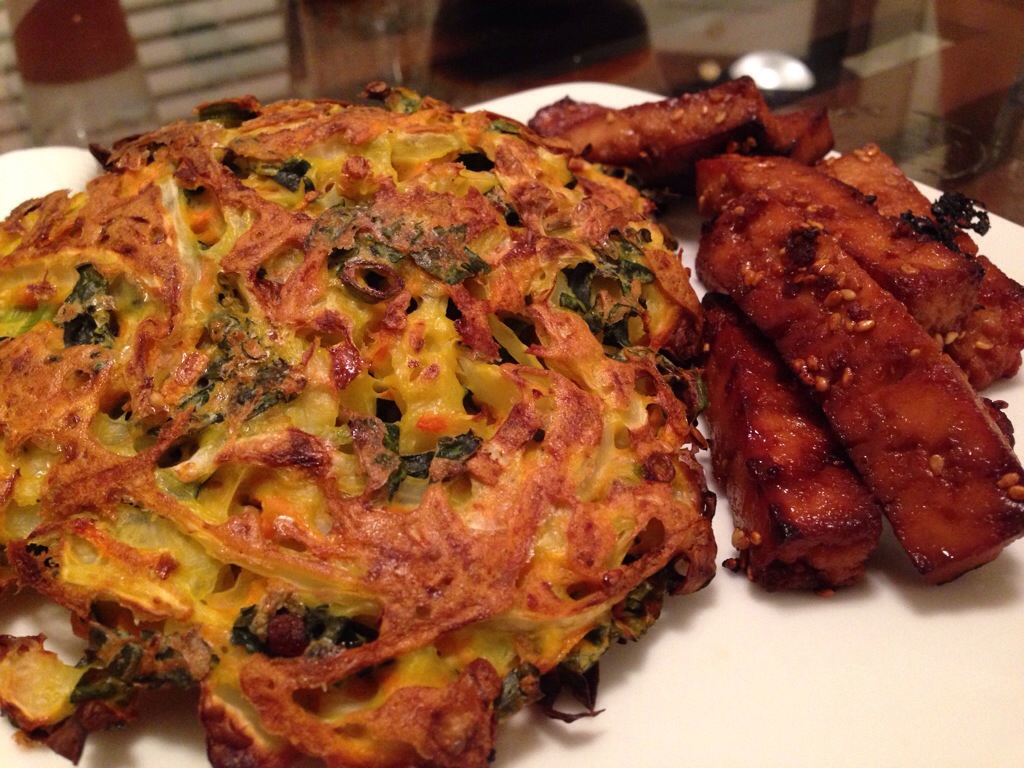 Meredith and I made this meal together for when Emily was here.

First the tofu. Meredith had donesomething like this before and we tried again. We took extra firm tofu and pressed it pretty hard to try to drain it more. We then marinaded it. The original marinade was a combination of: garlic powder, liquid aminos (soy sauce), sesame oil, sriracha, rice vinegar, worcestershire sauce, salt, pepper and a bit of water. We let it sit for two days however, we decided that we wanted a stronger flavor and darker color so we added some Soy Vey to it about an hourbefore cooking. We cooked it in the oven at 425 for about 30 minutes (flipped halfway).

They came out pretty good. Meredith said they weren't as crispy as before and not quite as good. Oh well. We still liked them.

The vegetable pancakes were inspired by the recipe below. We basically followed the idea but added extra carrots (grated by the way) and roughly 1.5 times everything else (except that salt, which was a mistake). We mixed them in two bowls since it was so much and kept combining as needed. We added the flour and eggs but kept adding flour and eggs until we basically liked theconsistency. We were not super careful with keeping track of how much we added and kind of played it by ear.

We baked them on non-stick foil at 425 for 25-30 min, flipped them and then another 10 (inspired byzucchini fritters and the like). Instead of the included sauce, we used the marinade from the tofu. It was mostly Soy Vey but also some of the other seasonings.

The pancakes turned out pretty good. Lots of veggies! They could have definitely used more salt. And maybe a bunch of other seasonings.

I like doing this kind of pancake in the oven. They come out pretty good and we can skip the oil! Of course,_real_pancakes would probably not work out so well.