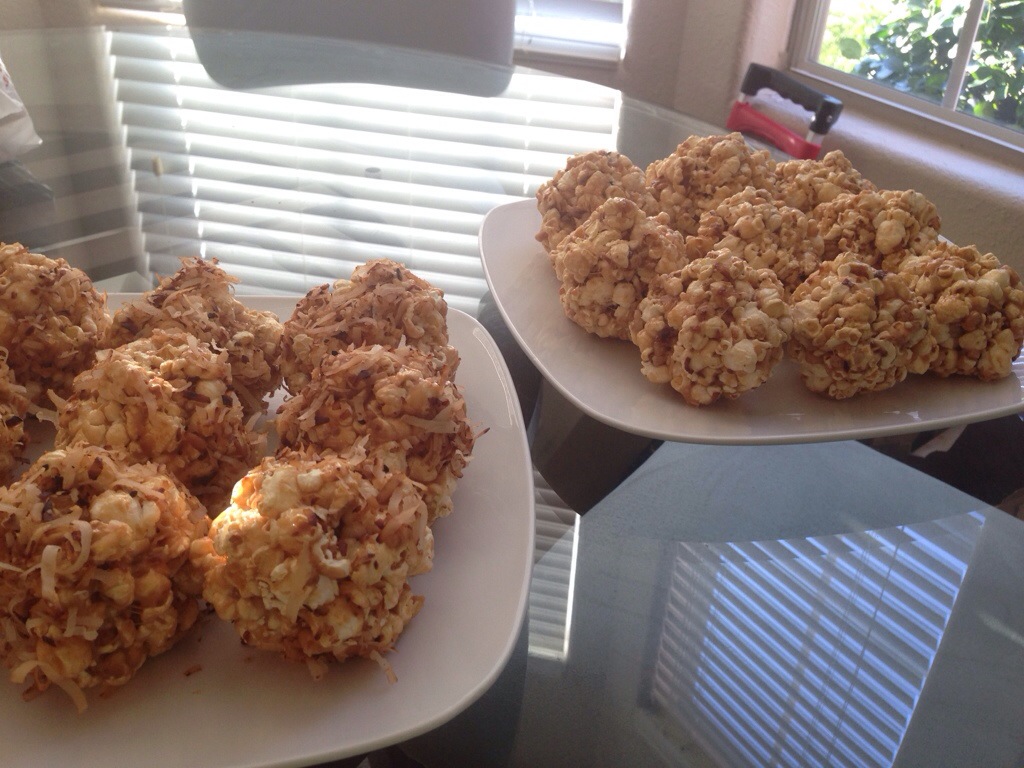 These are for the person watching Gracie. I made marshmallow pop-corn balls. Ididn't follow a specific recipe but I read a bunch to get the idea. They are actually all roughly the same.

My goal was to make something different but I also wanted to have coconut and peanut butter since I was trying to resemble Chick-O-Sticks.

My first version was a bit overdone with peanut butter, toasted coconut, toffee and whiskey. I didn't taste the coconut (though I really only tried it while it was cooking, not a final one). So I simplified it and stepped it up for the second.

I haven't really tasted them yet. I will wait and update this post as needed.

Pop the popcorn. (I used an air-popper).

Toast the coconut in a frying pan. Place coconut in pan on medium and keep it moving. As it gets close, take off the heat and keep stirring using the residual heat to finish toasting. Move to a dish when finished. (note that the sugar will leave quite a bit of mess on the pan)

To make the batter, melt the butter and peanut butter (and whiskey for version 1) on medium. When melted, add the marshmallows (and_untoasted_coconut for version 2). Combine until all melted. Scrape the pan as needed.

When fully melted, add mixture to the popcorn (and add toffee for version 1). Combine with a spoon. When cooled slightly, butter (or pam) your hand and use that to help combine. When fully combined, use both hands, buttered, (or sprayed with butter pam) to shape into balls. Try not to compress them too much (I over-did it. They should have been fluffier).

For version 2, press the toasted coconut unto the balls. Rolling didn't seem to work. They needed to be pressed.

Allow to cool on a tray. Made about 12 medium-sized popcorn balls.