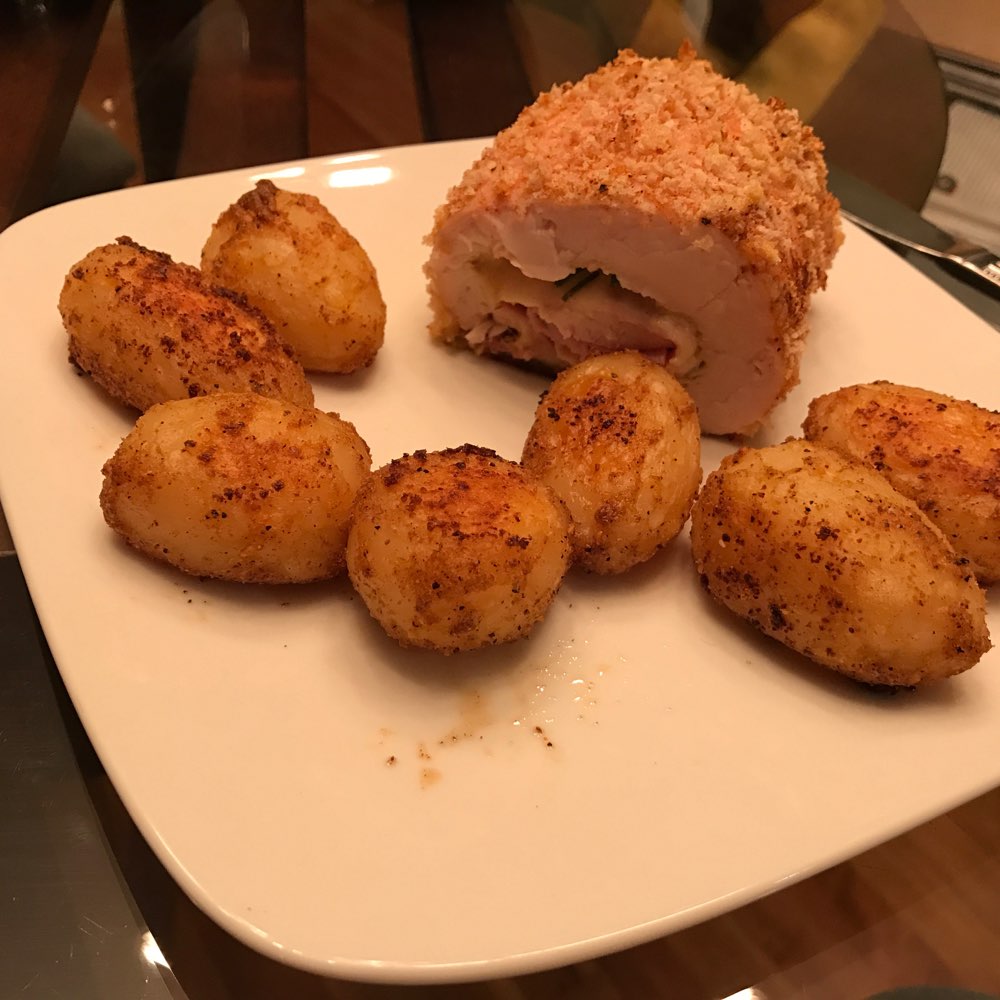 Meredith and I wanted to make a dinner that was a bit nicer than something we would do during the week but also not go too crazy. I did a bit of googleing and we came up with making Chicken Cordon Bleu and roasted potatoes.

For the chicken, I very loosely followed this Betty Crocker recipe (Local 1). We bought 2 breast for about 1.25 pounds of chicken2 and flattened it out as best I could. I did some salt and pepper on both sides. I then spread some dijon mustard on followed by lacy (low fat) swiss and (low sodium) ham. As seen in the pictures below, we then added fresh chives (forgot before) but we ended up moving them down to the mustard layer.

I rolled them up as best I could and used a toothpick to hold it. We made an egg wash of 1 whole egg and a bit of water. I then took panko bread crumbs and broke it up and bit before adding salt, pepper, and hot-but-not-smoked paprika.

I put it in the oven at 375°F (+convection) originally for 27 minutes but ended up adding another 20 (47 total) since I kept getting some low temp readings (as well as high-temp ones. I was confused). In the end, I think it was fully cooked and wasn't too dried out. We cut them in half and saved two servings for lunches. The flavors were really good though. And, one of them came out really pretty as you can see in the photo below.

I also really liked having the mustard it in there. I am glad I read that addition.

At Thanksgiving, my mom made super delicious potatoes. They had a great texture with a crisp outside and a creamy center. It turns out she used canned potatoes. I was a bit surprised, but I think that was really the key. They were essentially par-cooked already.

I decided that I am comfortable using canned tomatoes all the time; why not canned potatoes. We used two cans of whole potatoes and tossed them with 1.5 Tbsp of melted butter. We used some Emril's Cajun Essence and Penzeys' Roasted garlic powder. I originally was going to do 40 min at 375°F (+convection) but since I had to let the chicken keep going, I ended up at an hour. I had tossed them every once in a while to keep them from burning.

They came out really good. Maybe not as good as my Mom's but still had a nice texture. And I want to explore using canned potatoes for other things. 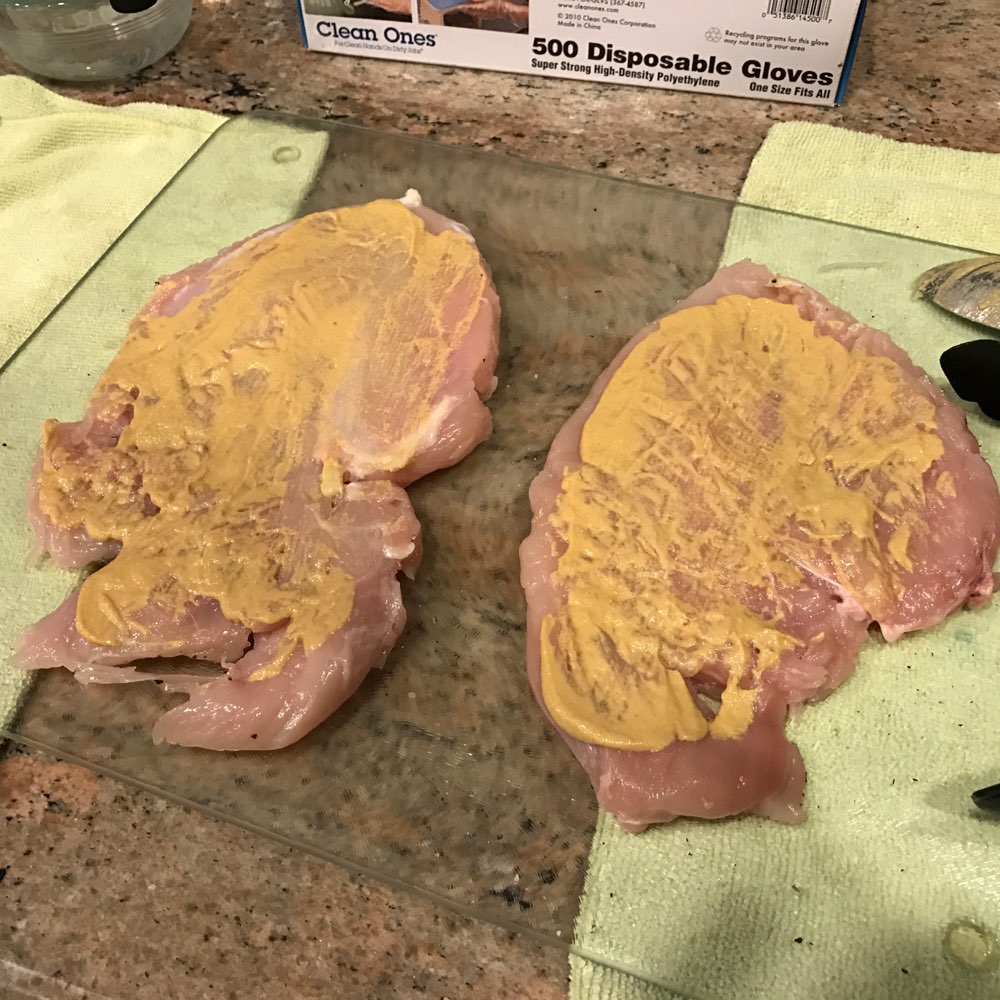 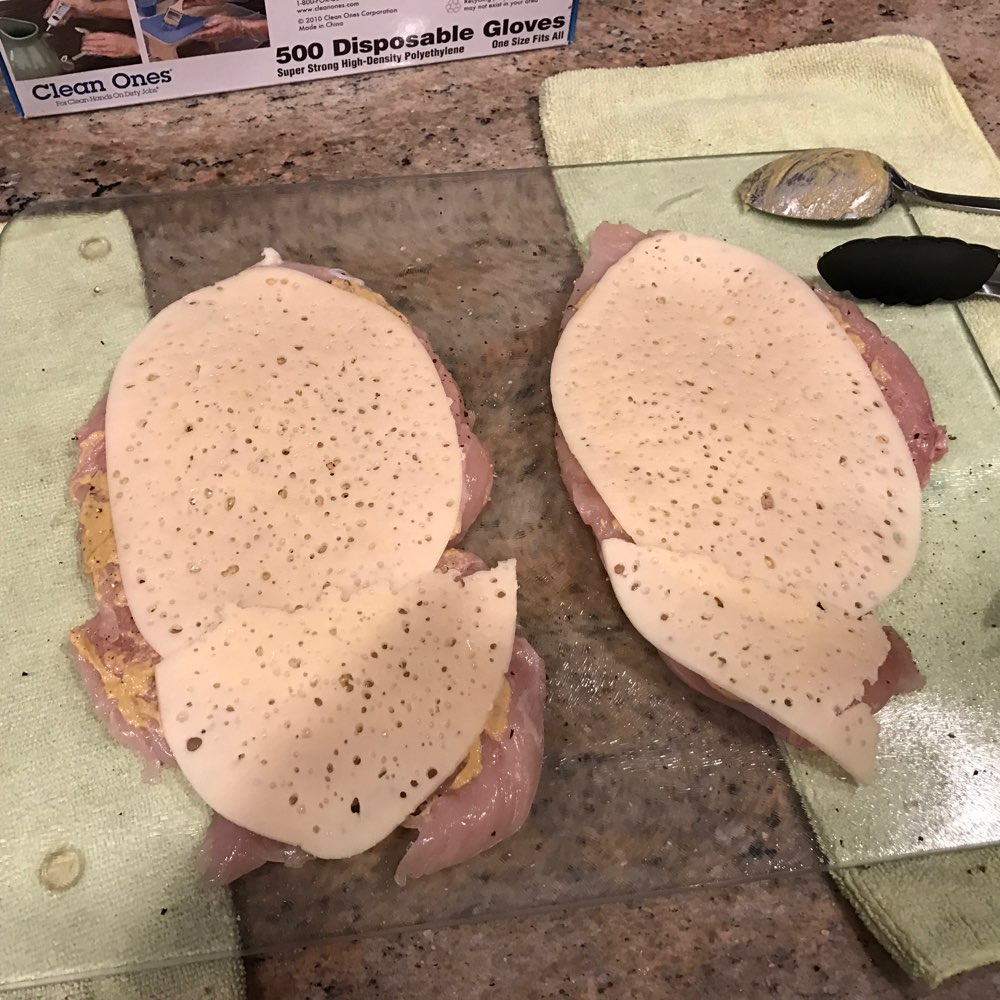 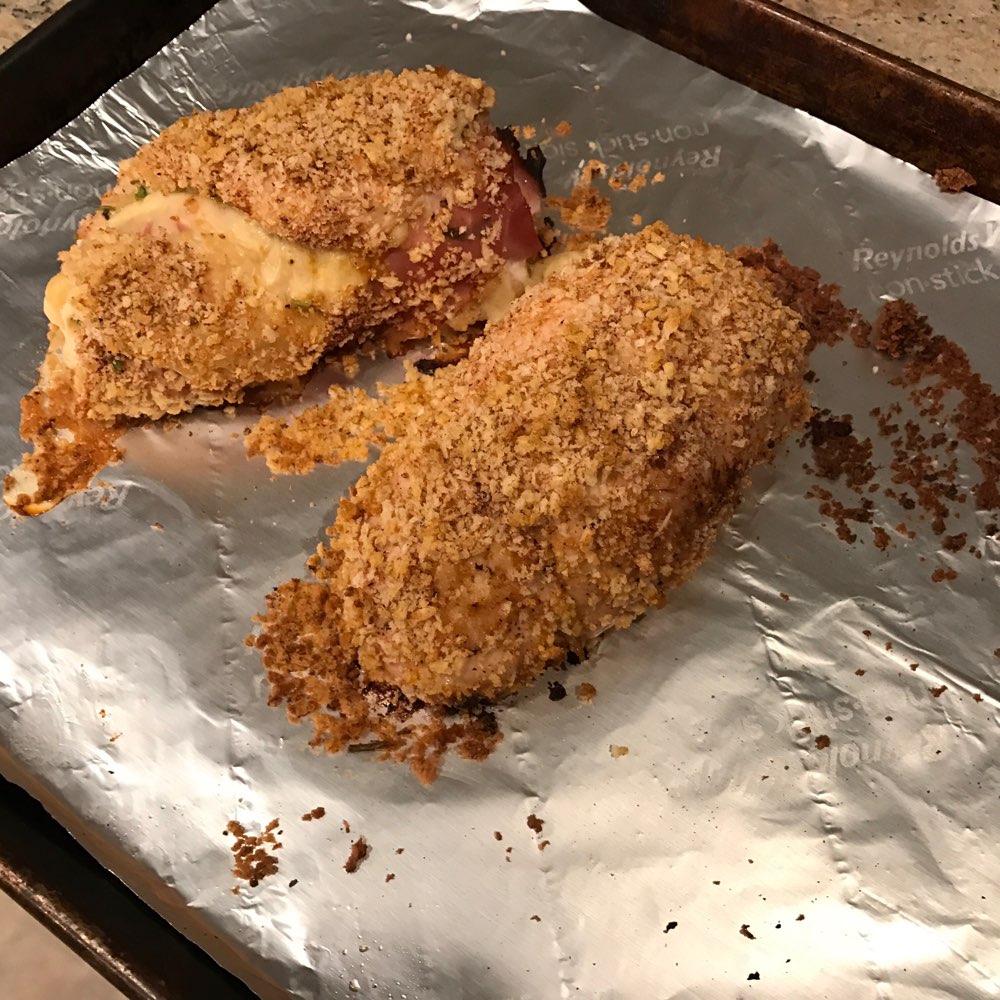 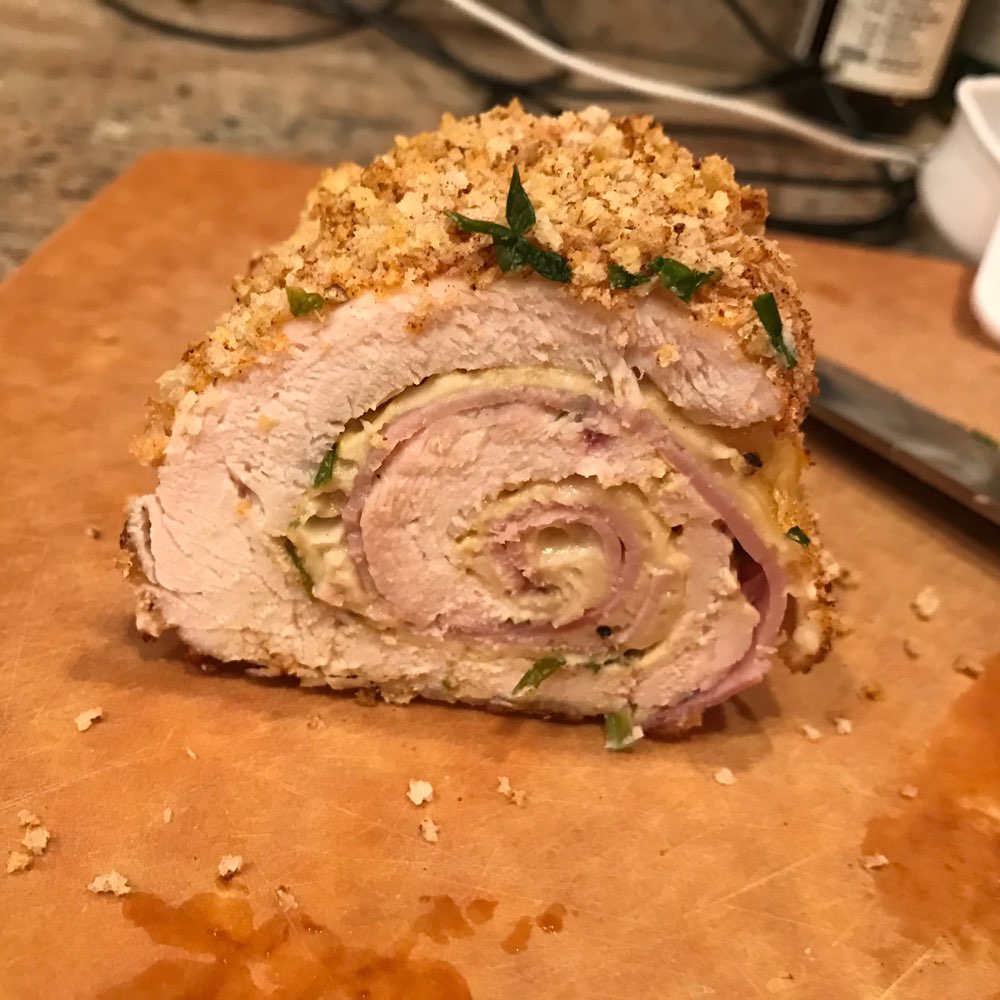 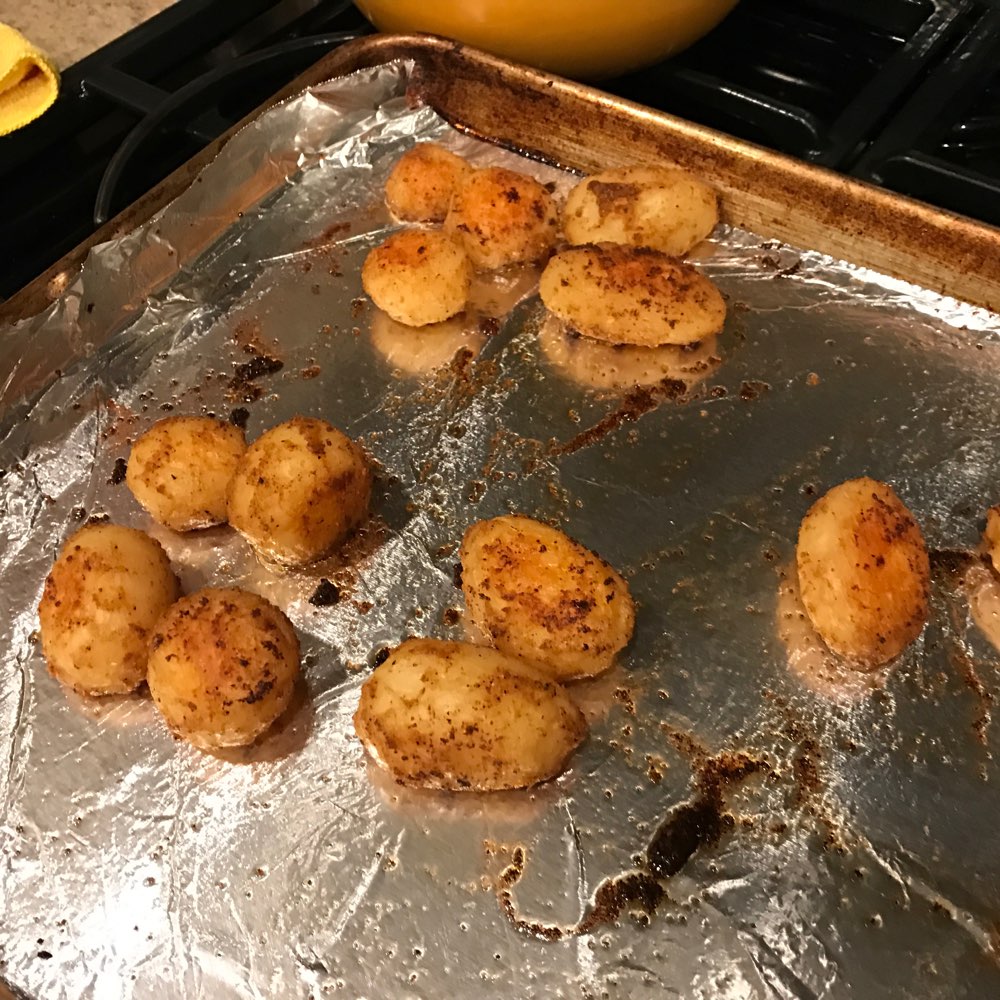