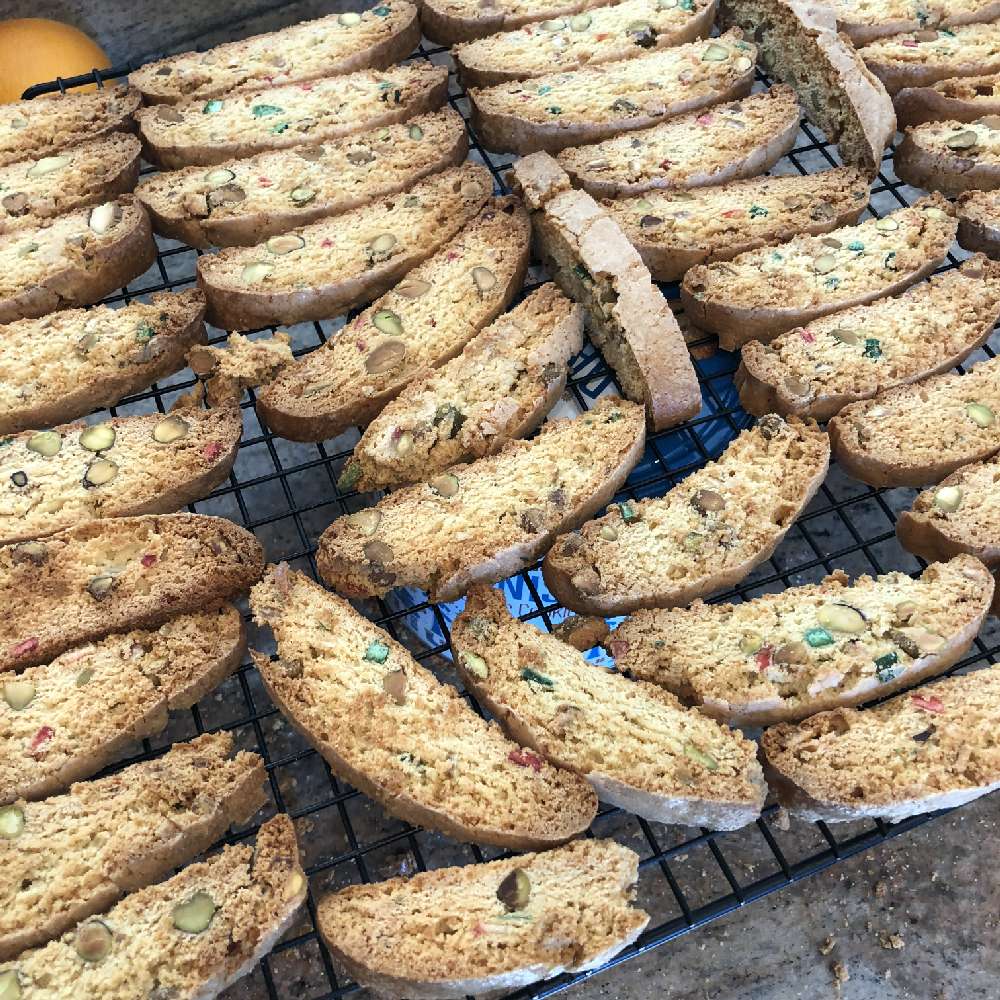 I made a batch of my Dad's Biscotti for two work-related Christmas parties. Fundamentally, I made very few changes/notes. The biggest was that I used the zest of about 5/6ths of a lemon instead of measuring. Other than that, I followed the ingredients pretty closely. I did it with pistachios and Fruit Cake mix to give it more christmas color.

But, despite staying pretty true to the recipe (including not making altitude-related changes), I struggled a bit. It all came together pretty well (though it is sticky; I nearly broke two spatulas before getting the wooden spoon). I shaped it and put it in for the first bake at 325°F (w/ convection) for about 33 minutes. They came out white as a ghost!!! And, they stuck to the silpat and the first one tore.

I put them back in for another 10 min or so with the temp kicked up to 350°F and that seemed to work better. 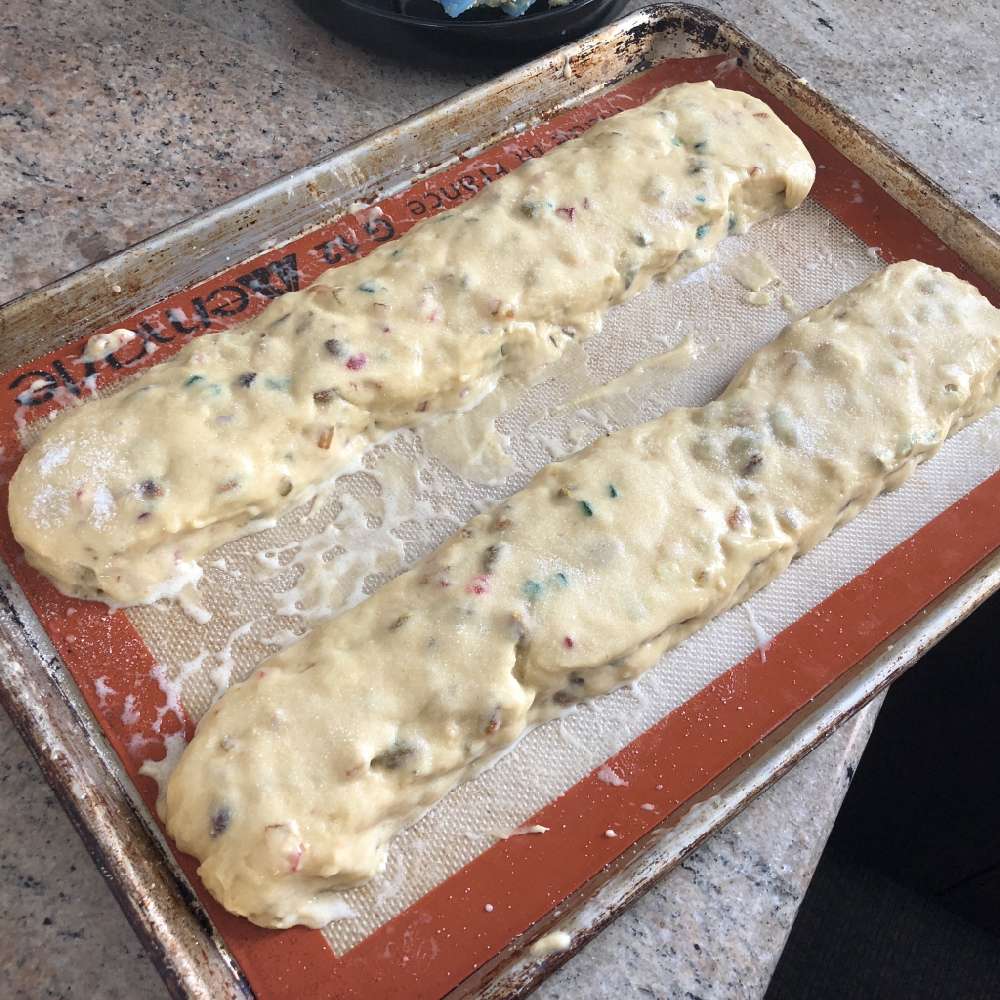 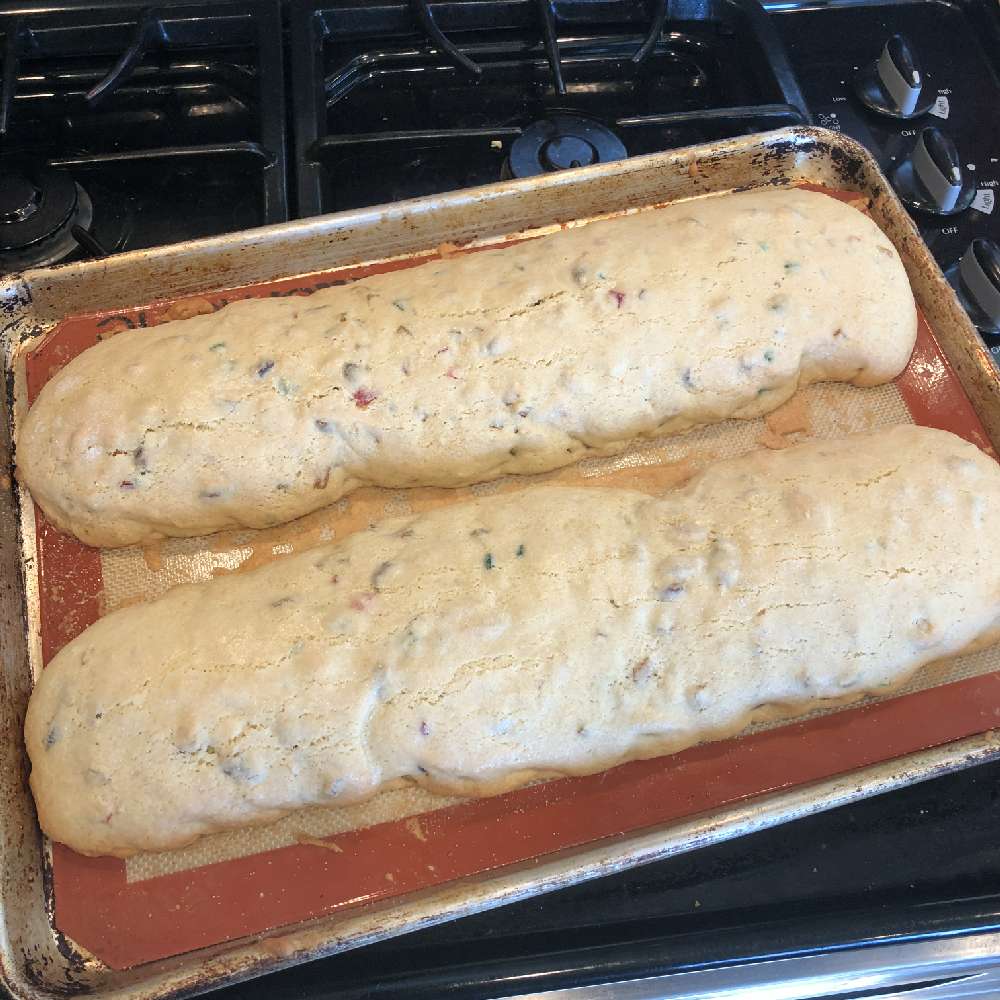 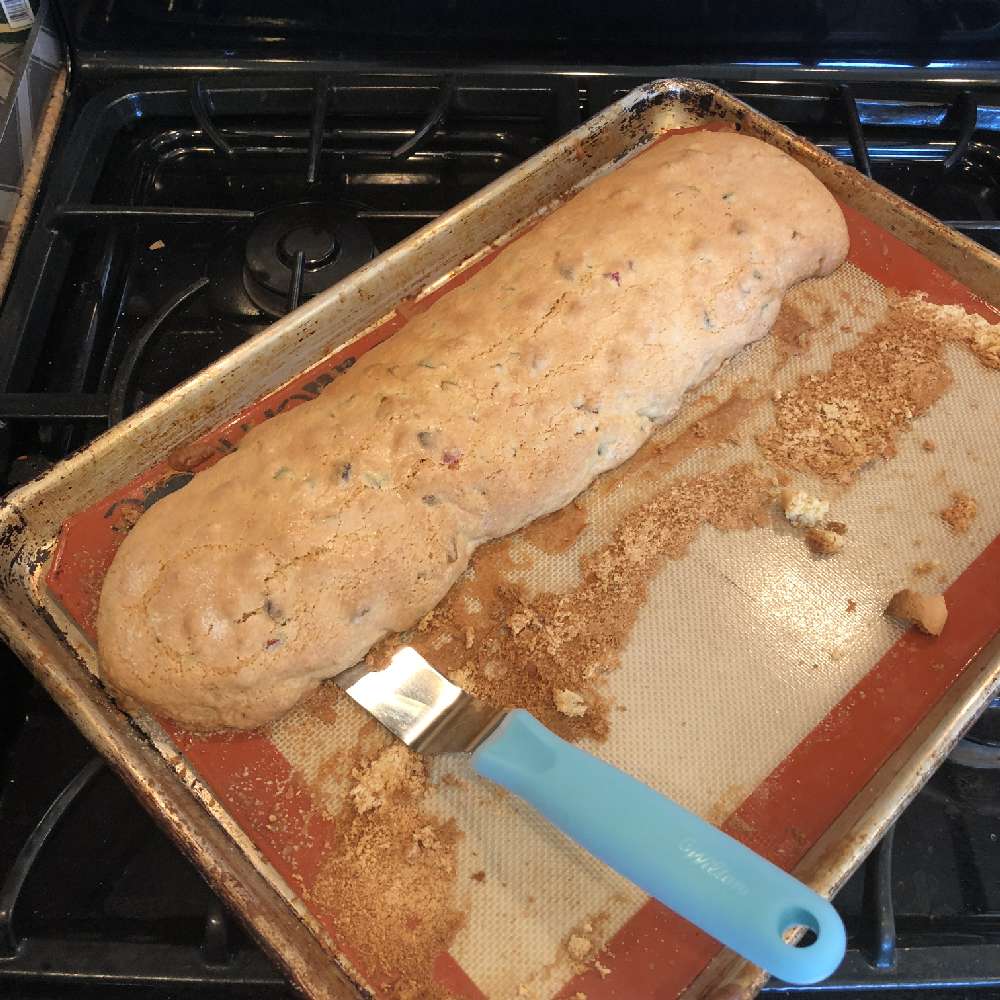 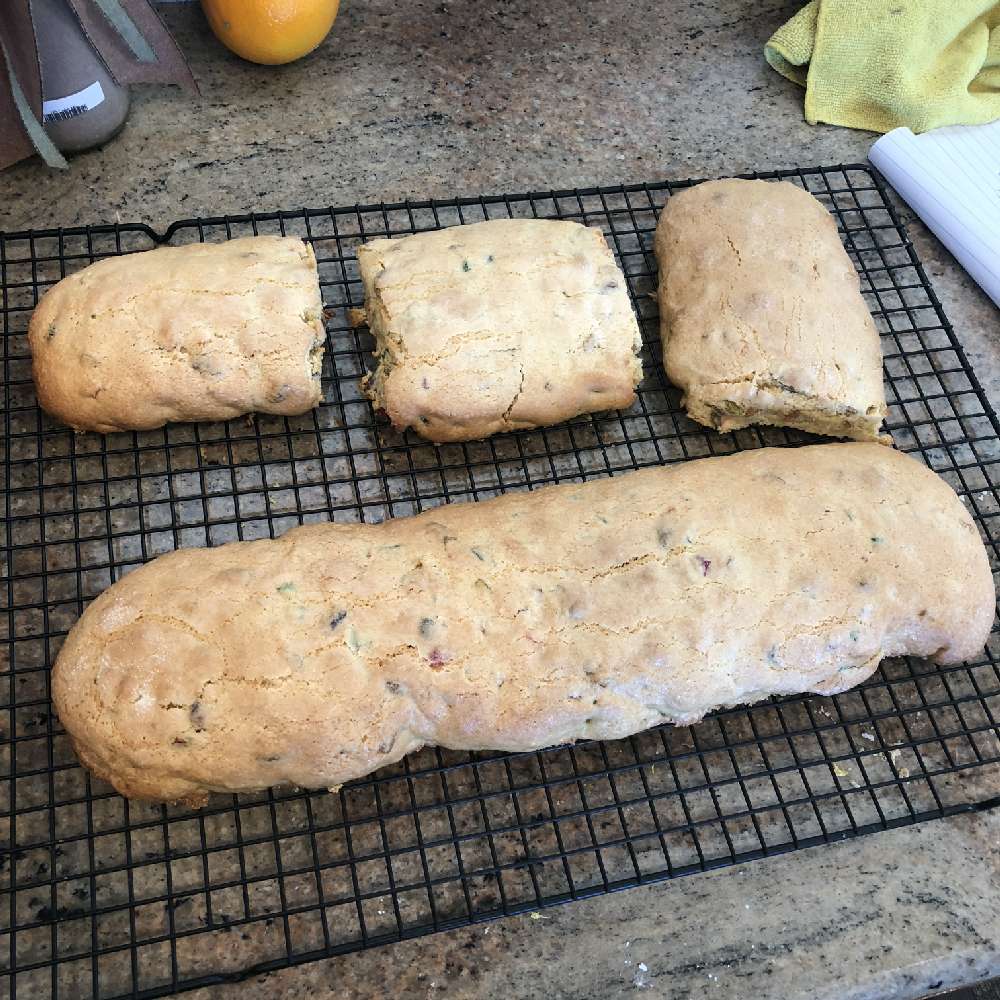 I let them cool and then tried to cut them. My sharpened my knives while they cooled (They needed it) and still, my (junky) serrated knife was tearing them apart. I ended up using the freshly sharped chef's knife to get through it ok.

I did my dad's water trick for the large loaf but forgot to do it on the first piece of the broken one. MISTAKE. The tricks does a good job at keeping it together.

Anyway, I put them back in the oven at 350°F for 20 minutes but when I went to flip, they still seemed a bit like they weren't crisping. I flipped them and turned it up to 325°F. Of course, I forgot to change the change the time so then they got a bit overdone. Certainly not bad (mostly, there were a few) but not as I would have liked 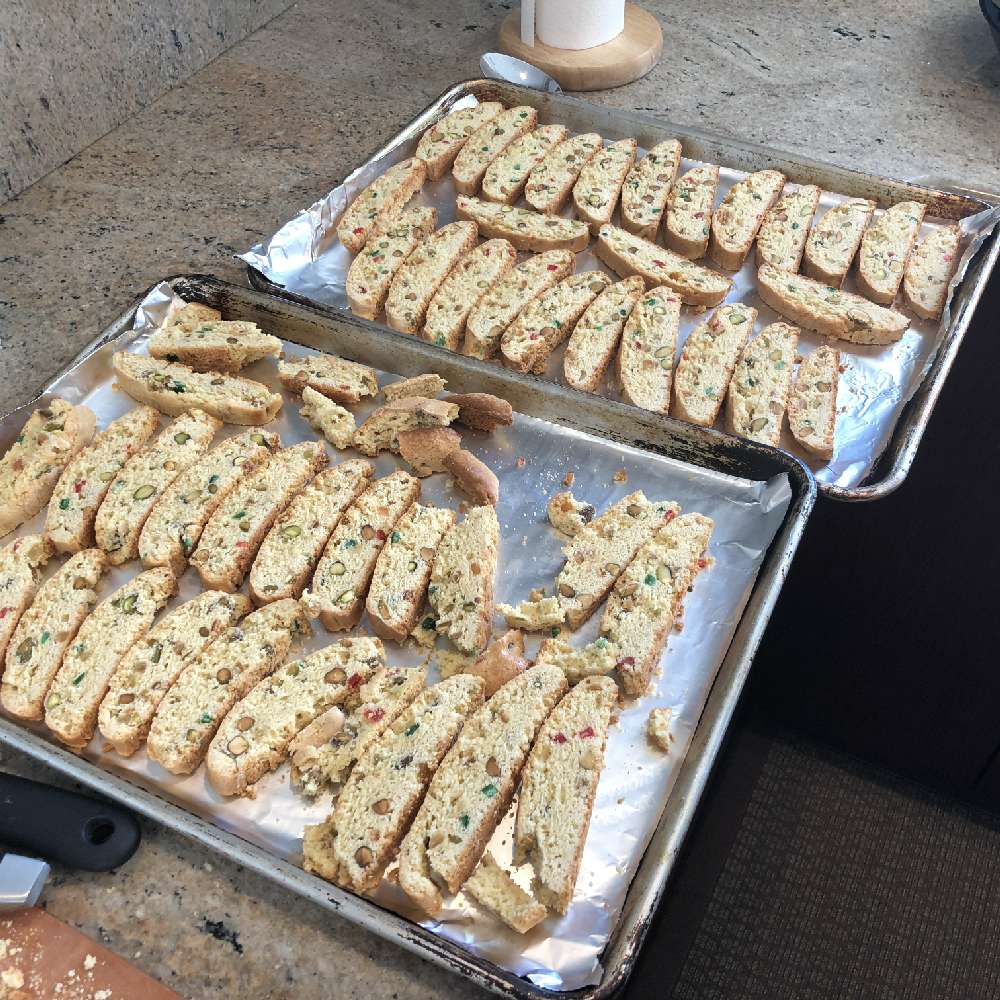 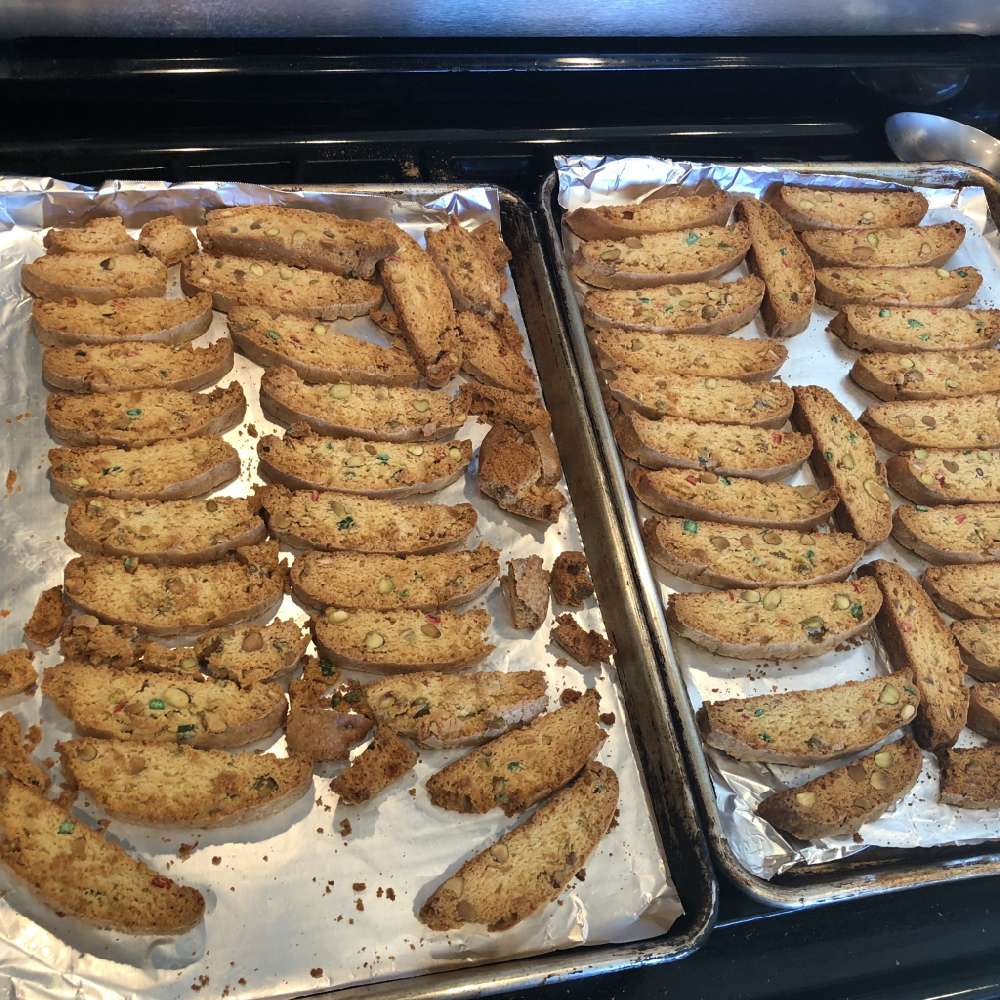 I cooled them with a fan since we were already late for the first party.

Overall, they were fine. Not as good as when my dad does it but this was my first time! I liked it with the fruit mix, though Meredith wants to do candies cherries next time. And I want to make sure they do not get as crispy.