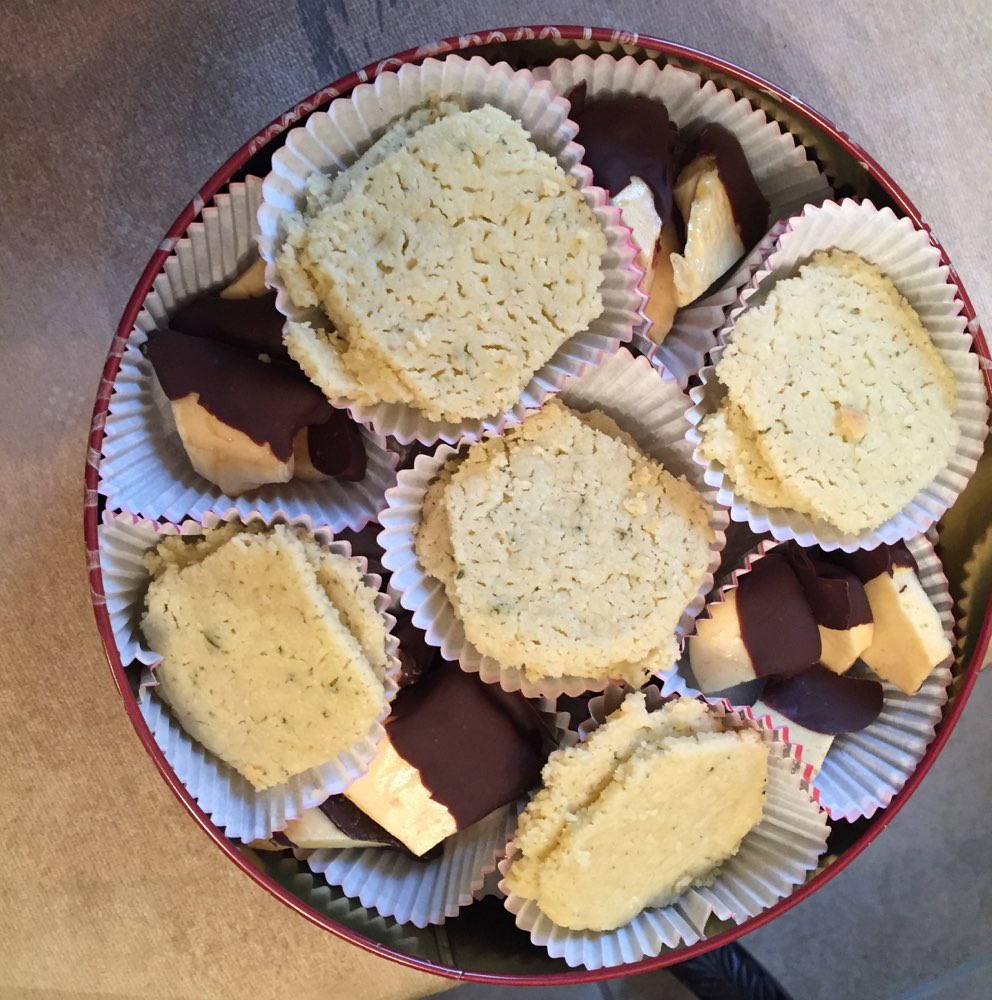 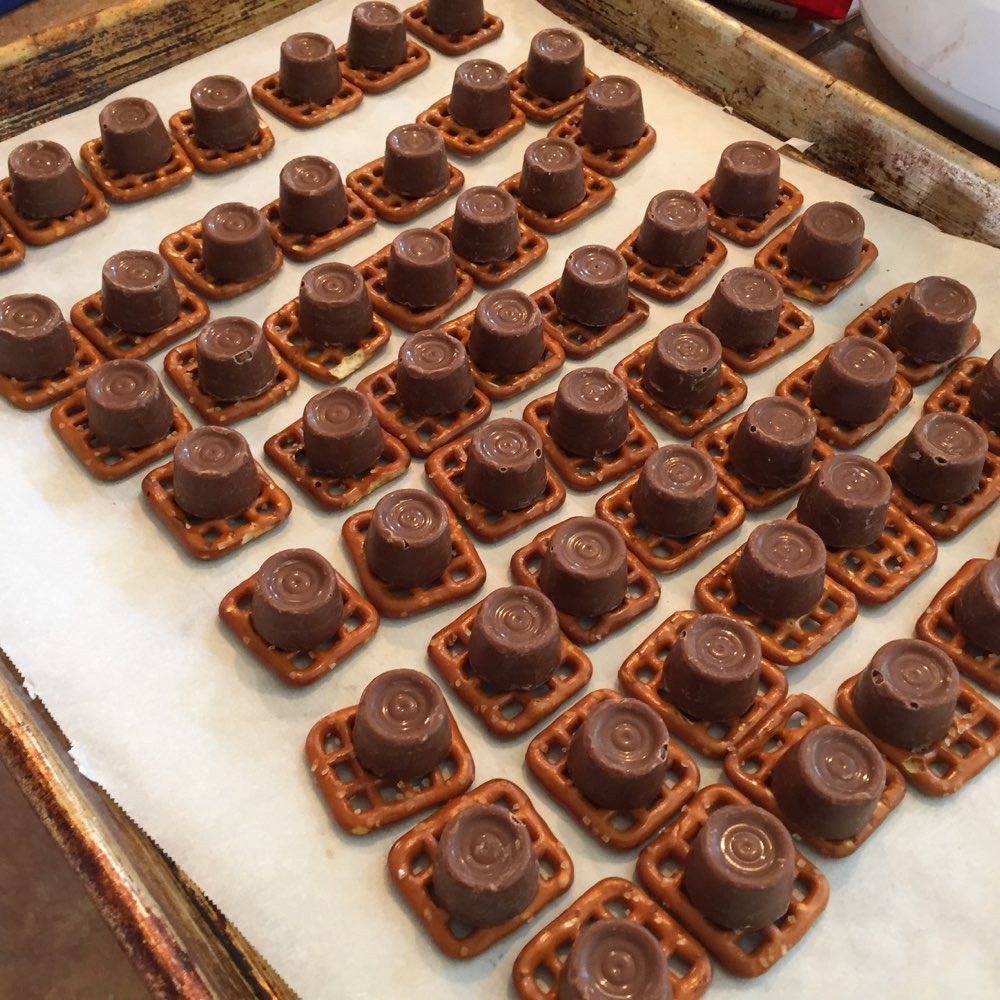 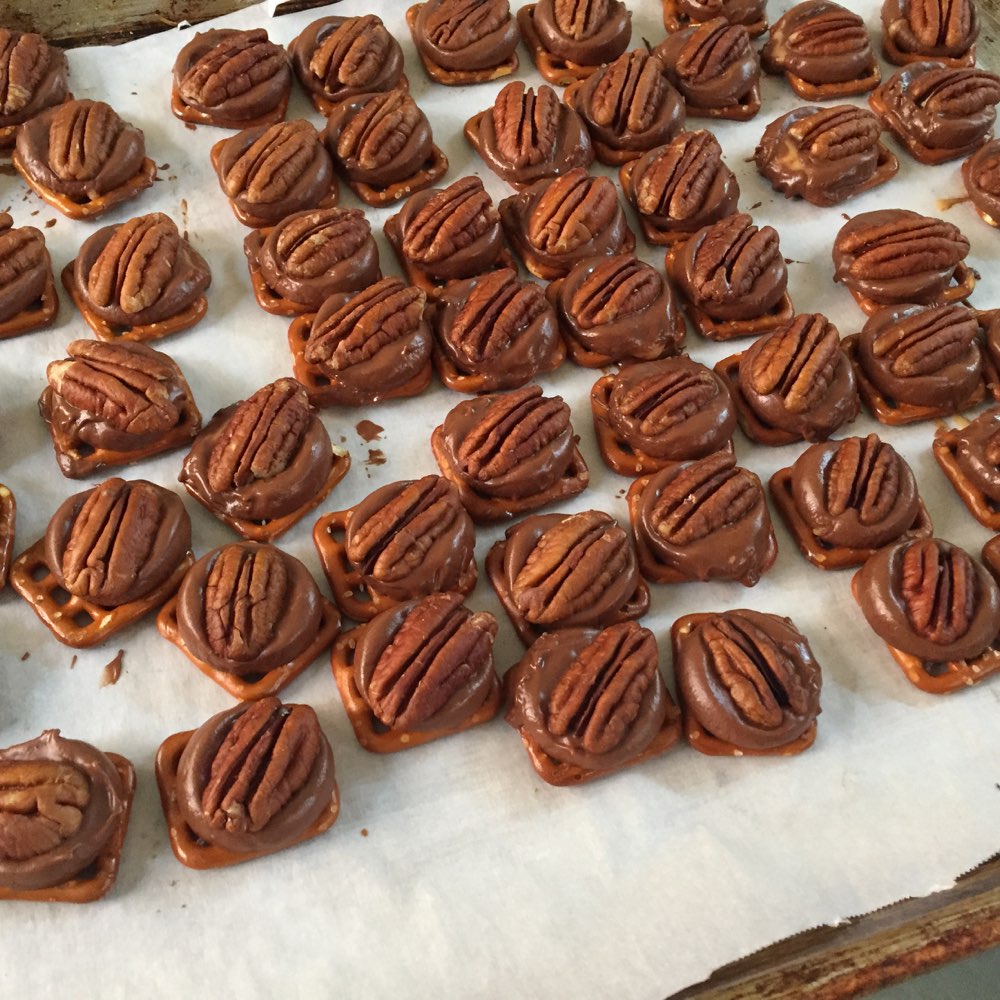 We were at a holiday event and someone brought these. They were so good that we had to ask what they were and how to make them. It turns out that they are made from Rollos. The recipe is super, super simple. Place a Rollo on each pretzel, bake at 350 for 4 minutes, then quickly press on a pecan. Let cool (we used the cool garage).

They were so simple and also really good. Actually, perhaps too good! More than a few people reported that this was their favorite of our candy. And we barely made it. 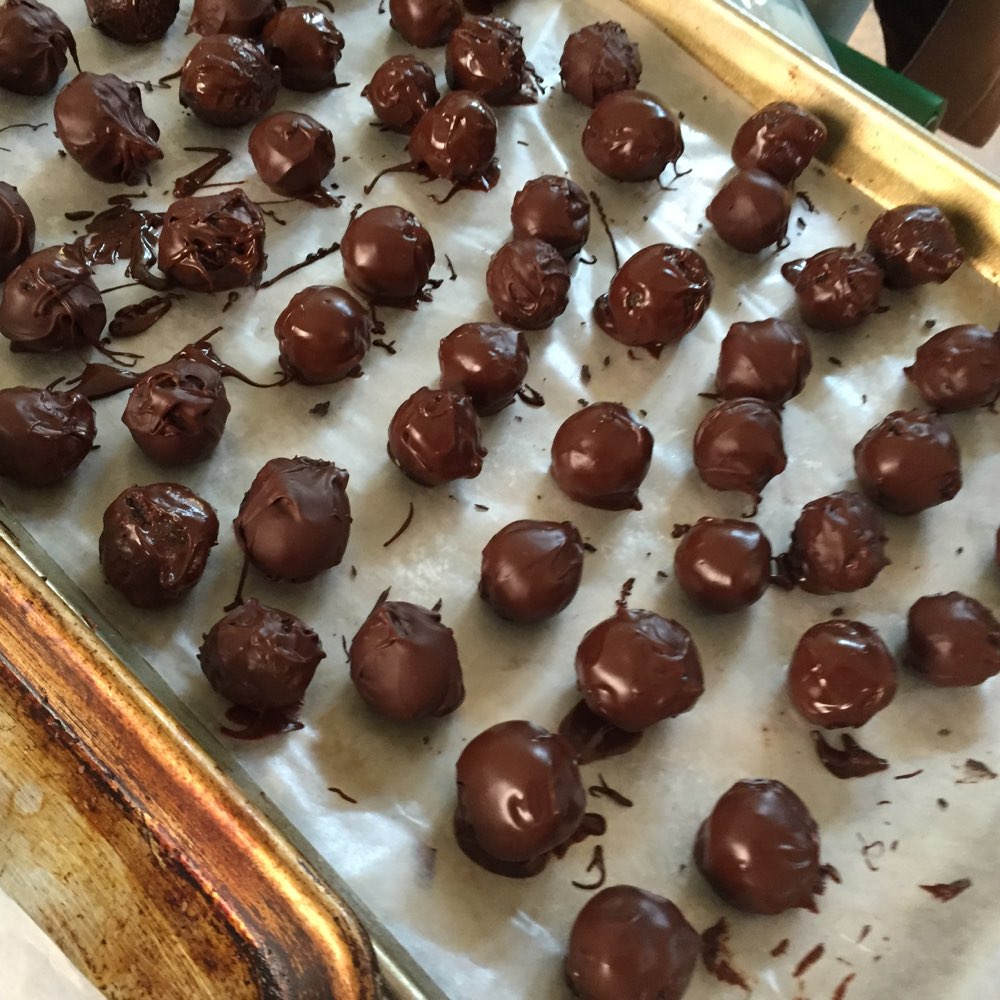 We made this from this Kraft Recipe (local). We followed the recipe pretty closely except we used Greek Yogurt cream cheese (about the same calories but more protein, less fat). We dipped them in dark semi-sweet chocolate (which we also thinned with coconut oil). 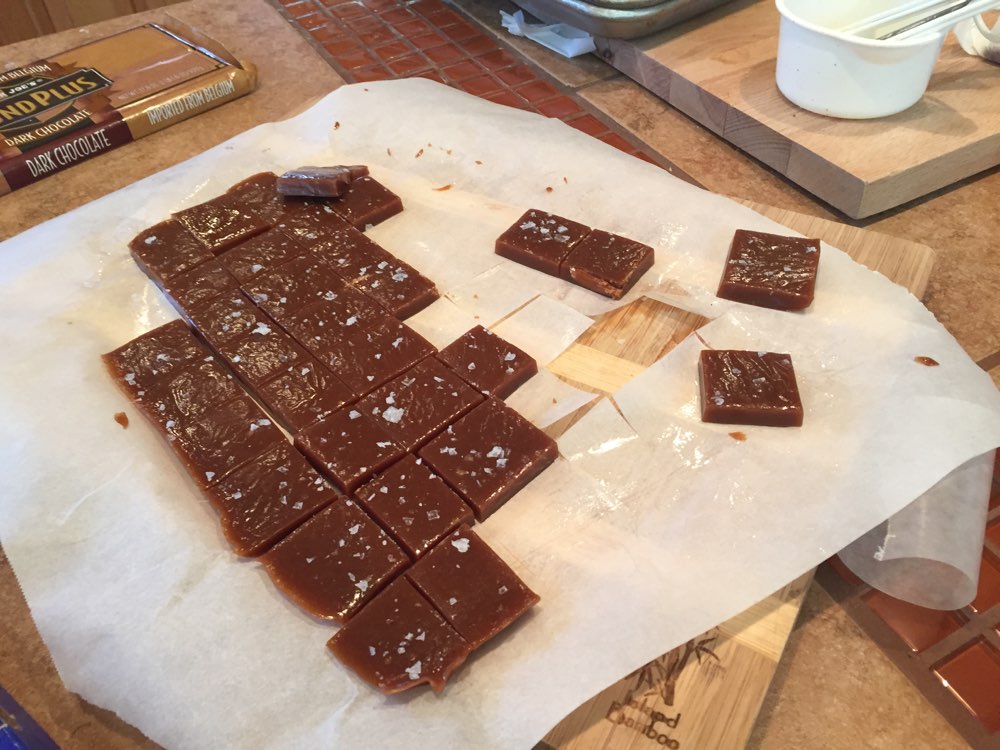 Meredith had made these for me a while ago and they were really good so we decided to try them again. We used the recipe from So How's it Taste? (local). The recipe is actually pretty simple. I think the hardest thing is (a) the temperature adjustment and (b) not stirring the sugar.

On the note of altitude, we followed many guides that said to basically just linearly adjust the temperature based on the boiling point of water. Essentially, just decrease by 10F

They were really good. I think we just have to be more careful about using too much grease on the pan. Also wrapping them is a royal pain. We ended up using parchment and tape to hold it.

Salted Whiskey Caramels (from So How's it Taste?) 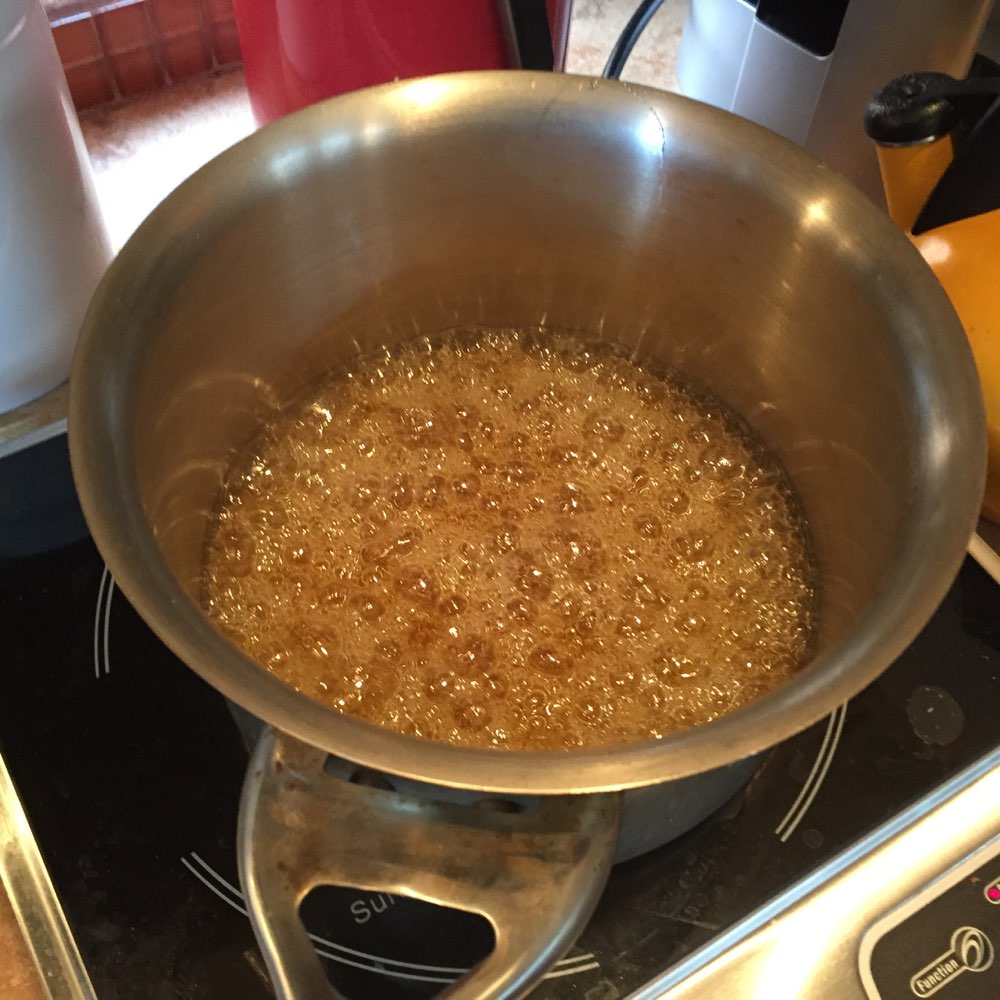 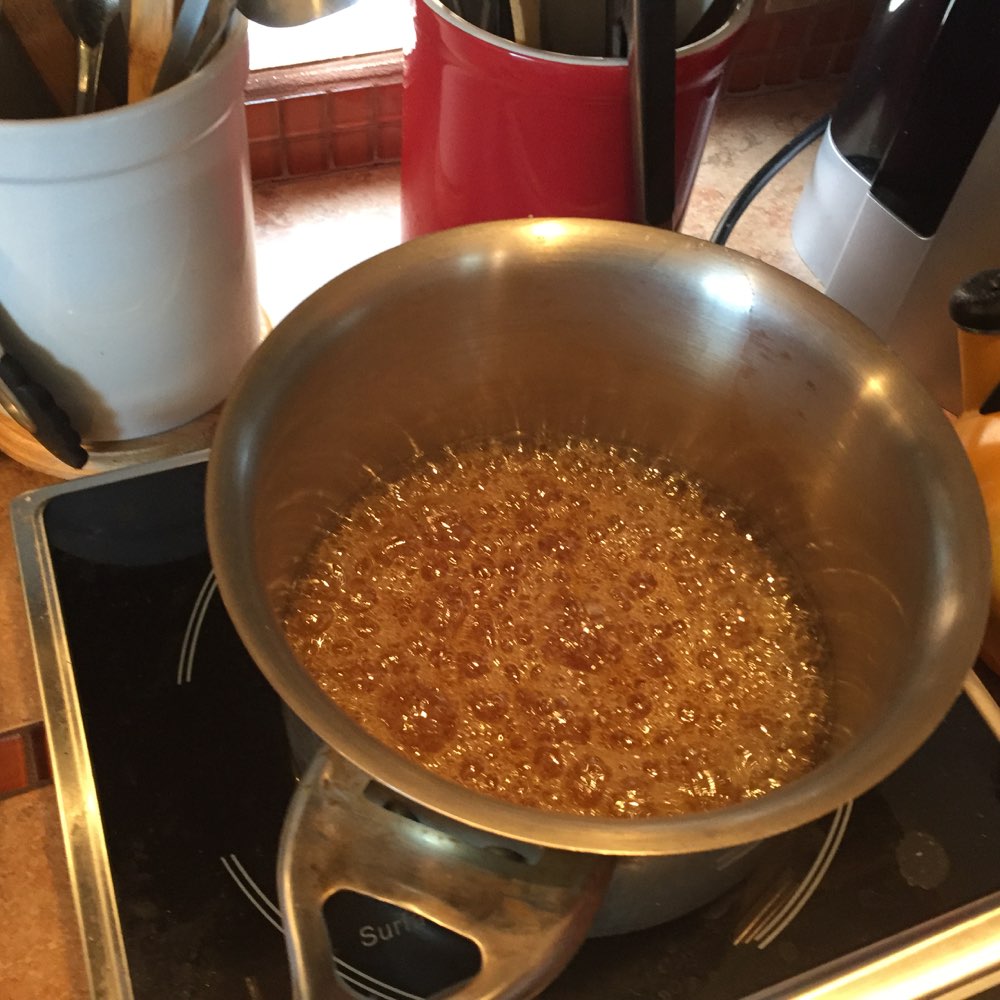 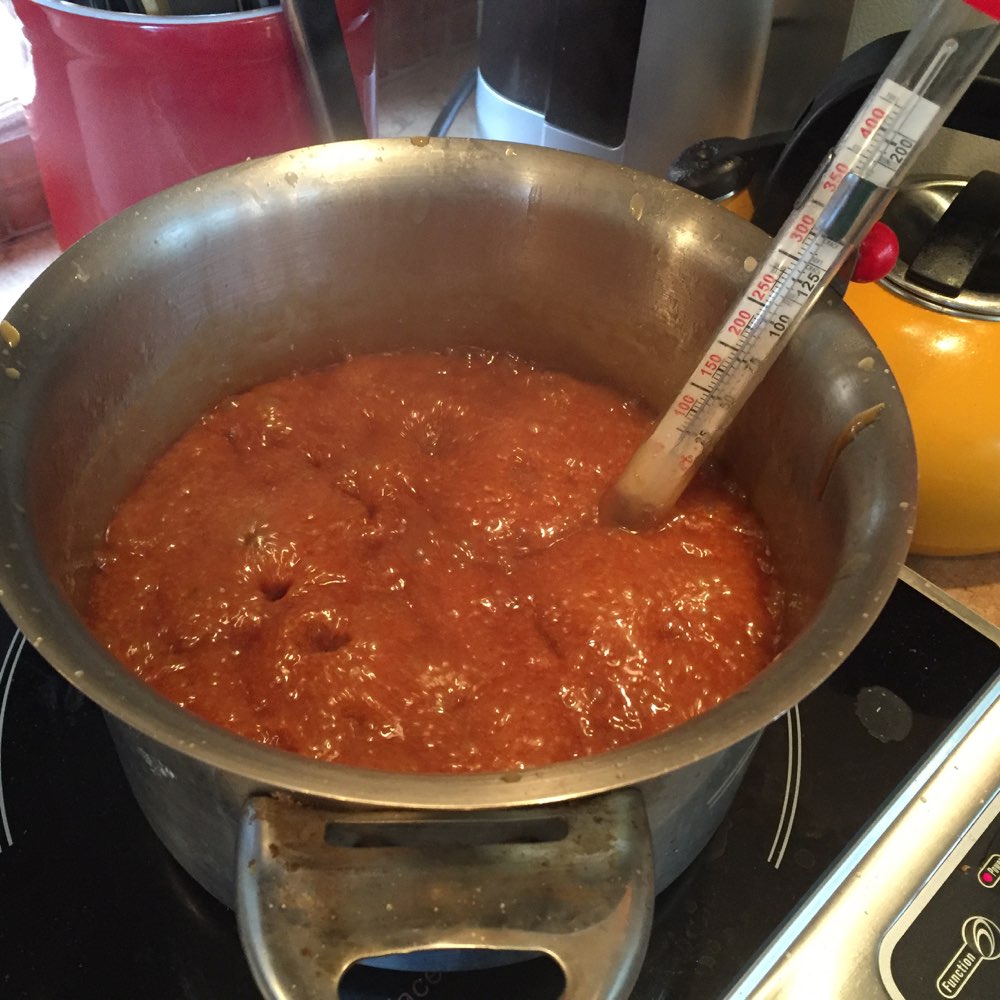 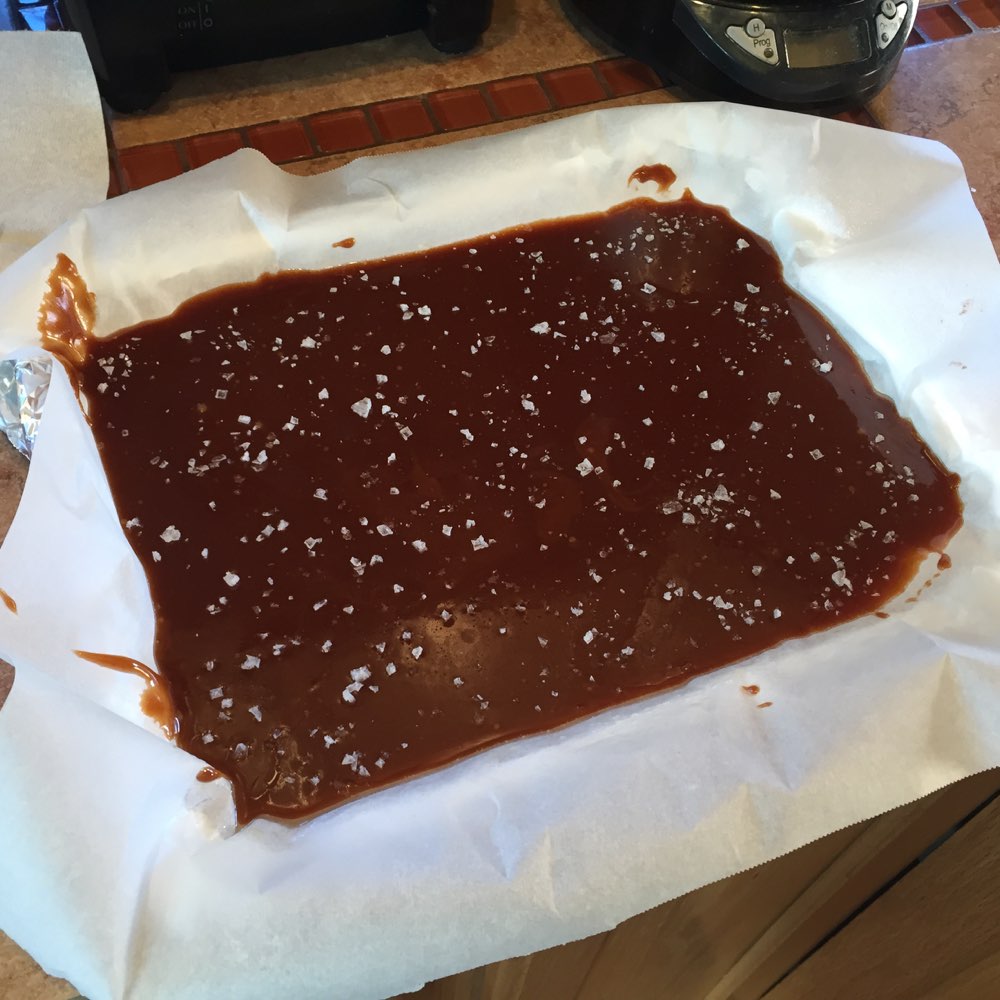 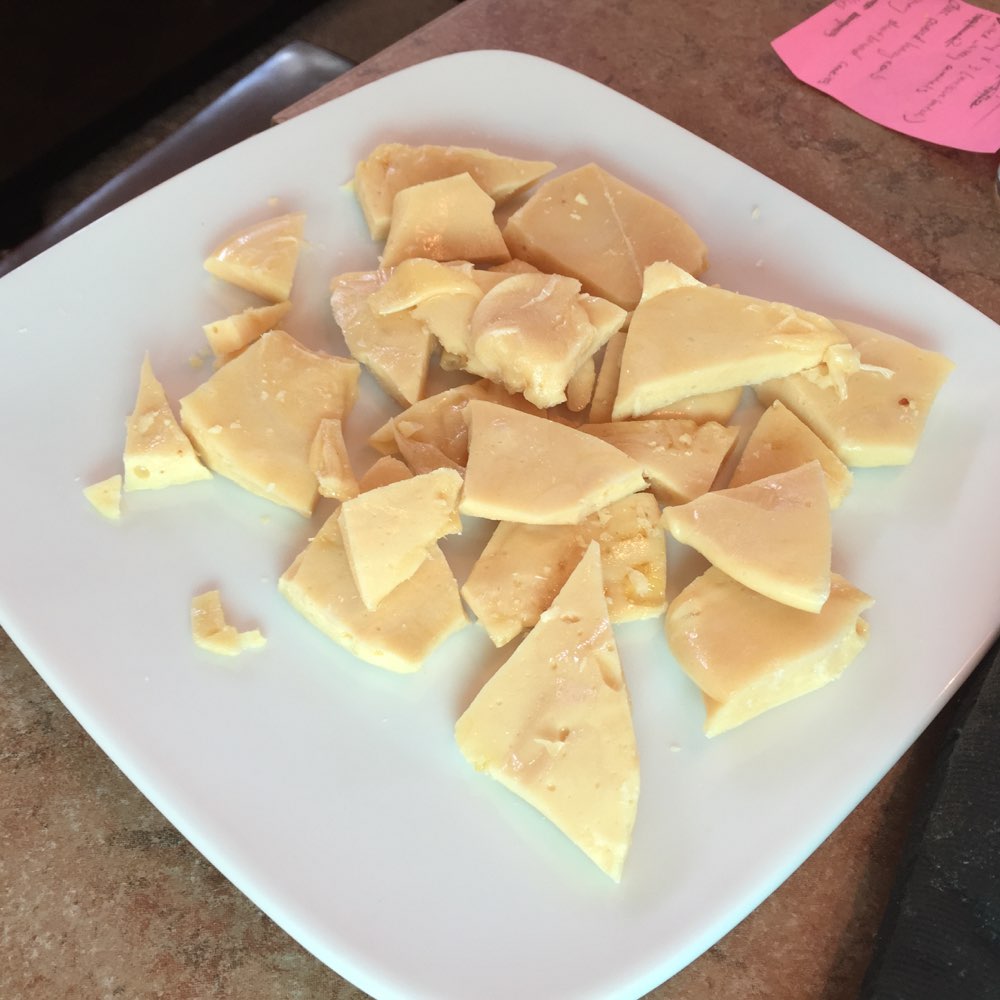 We love honeycomb candy we used to buy at the grocery store so we decided to make it. We used this Joy The Baker recipe (local) and followed it closely except again the temperature (see above). However, we had trouble with the combination of candy and digital thermometers. Before I knew it, the temp had gone to 300°F (where it was supposed to be if not for the adjustment).

It became really hard to stir and control. I think it was too hard/too hot. It kind of became a sticky mess as you can see from the photos. And a ton left on the pan.

They did mostly work. There was certainly a honeycomb structure but it was smaller than we would have hopen. I would try it again but I would be more careful about the temperatures. It goes up in temp really quickly.

As you can see in the top picture, we dipped it in chocolate.

Homemade Honeycomb (from Joy The Baker) 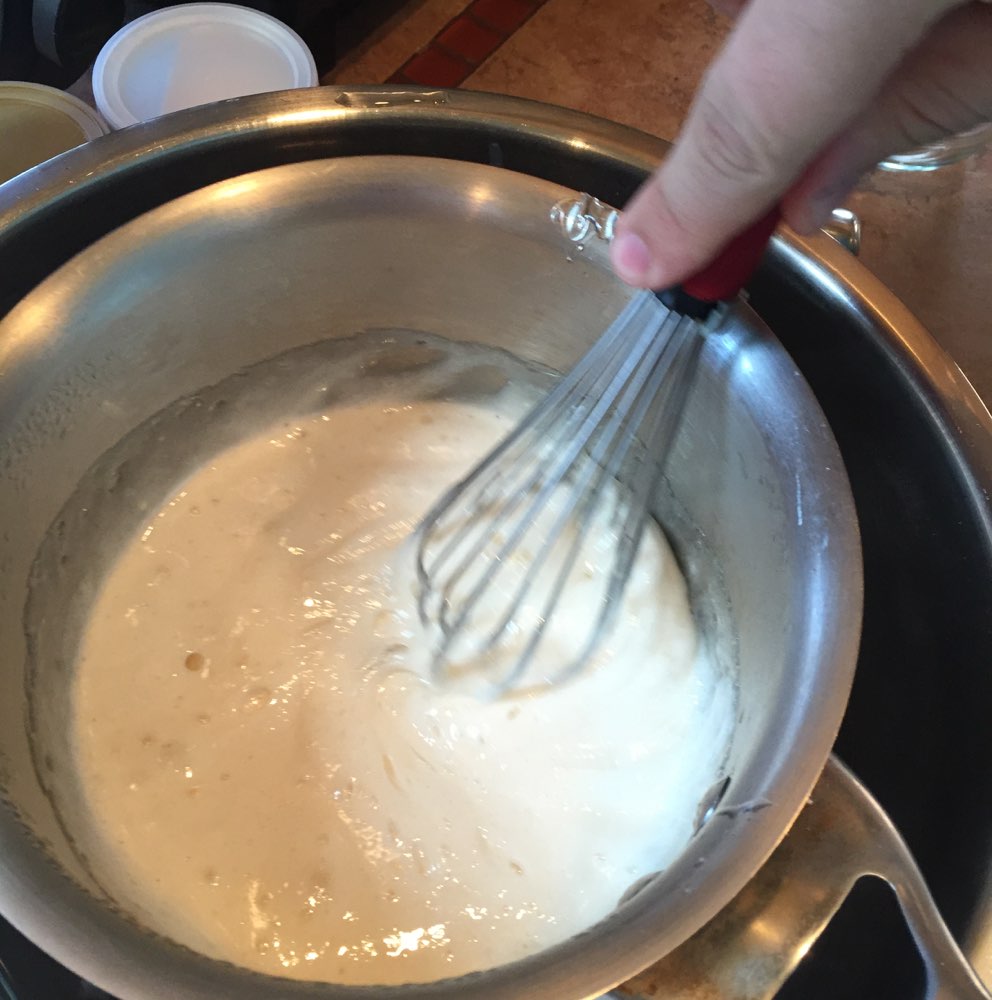 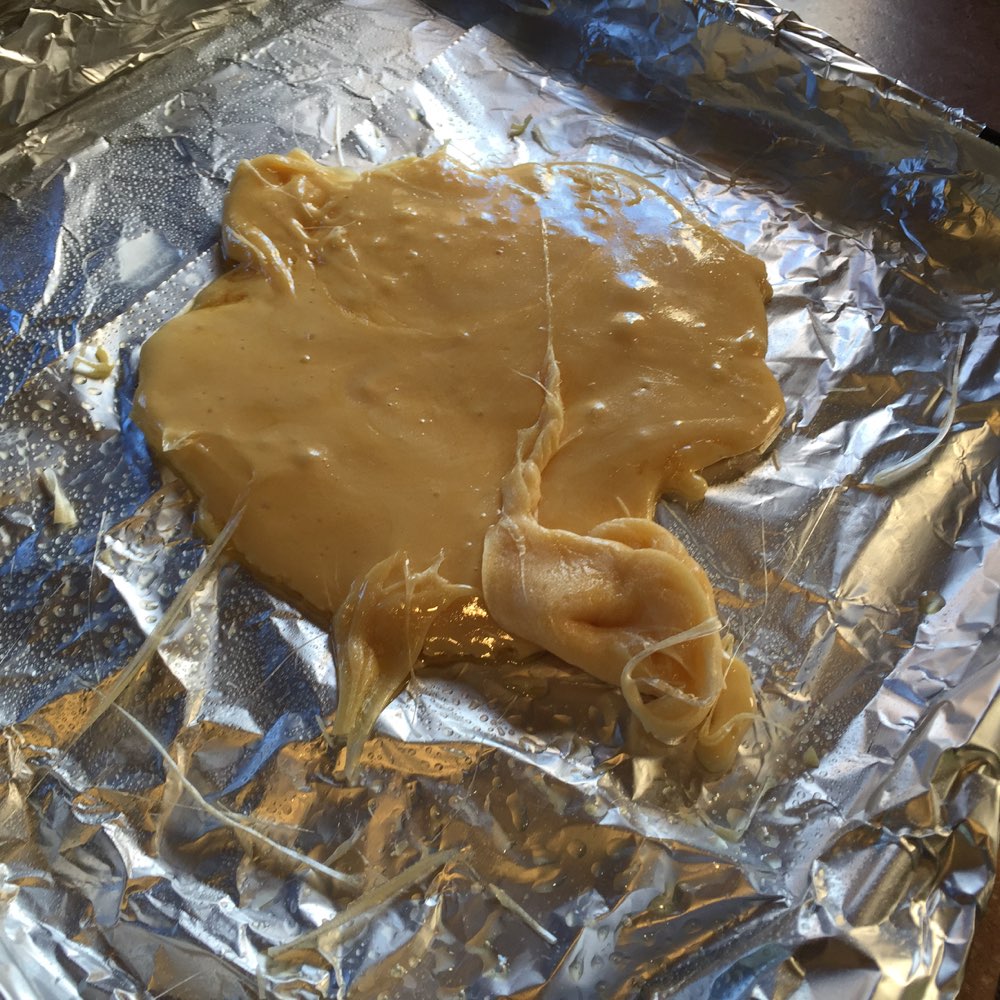 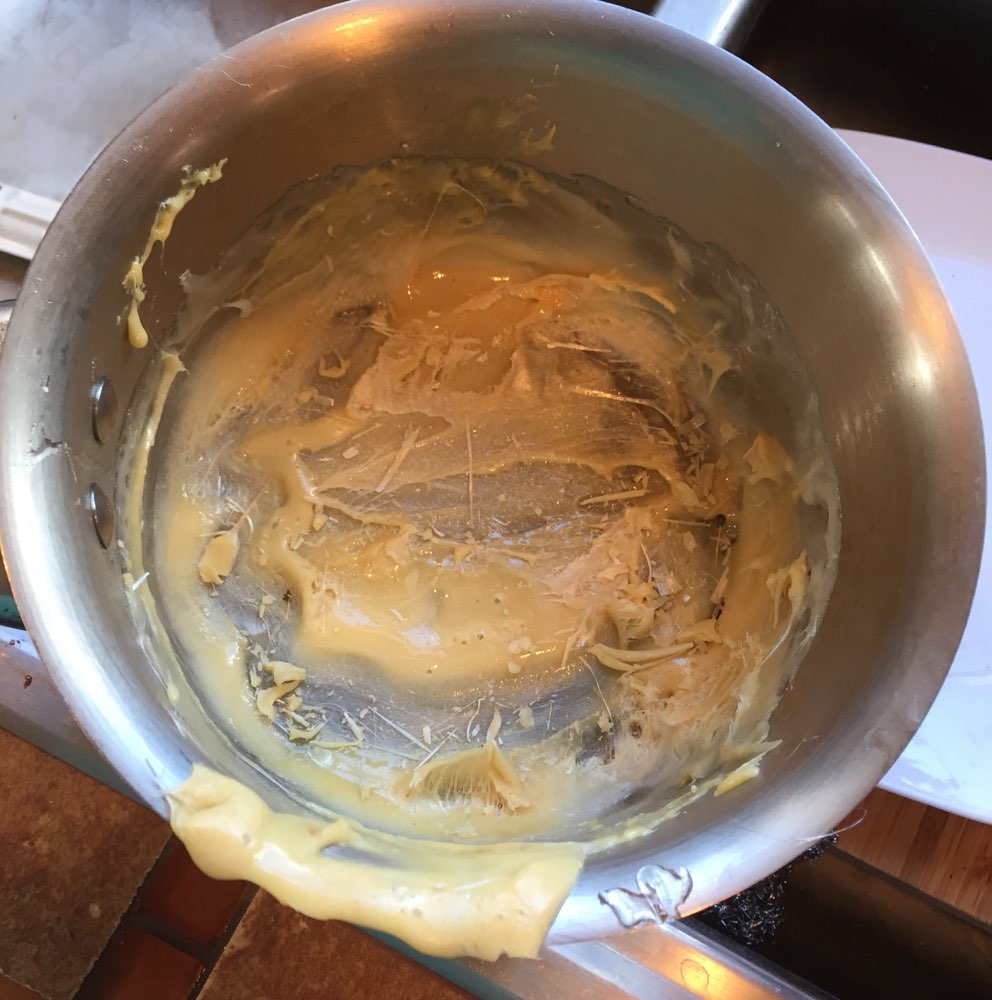 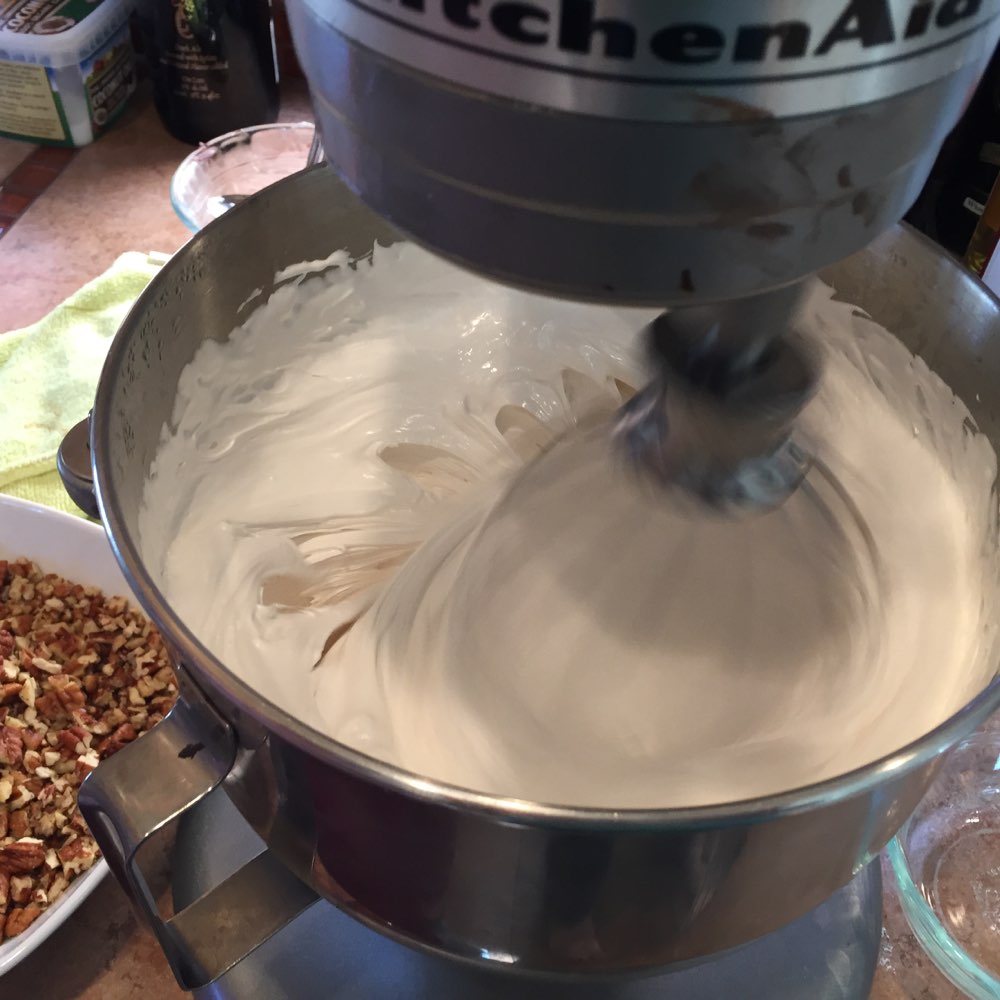 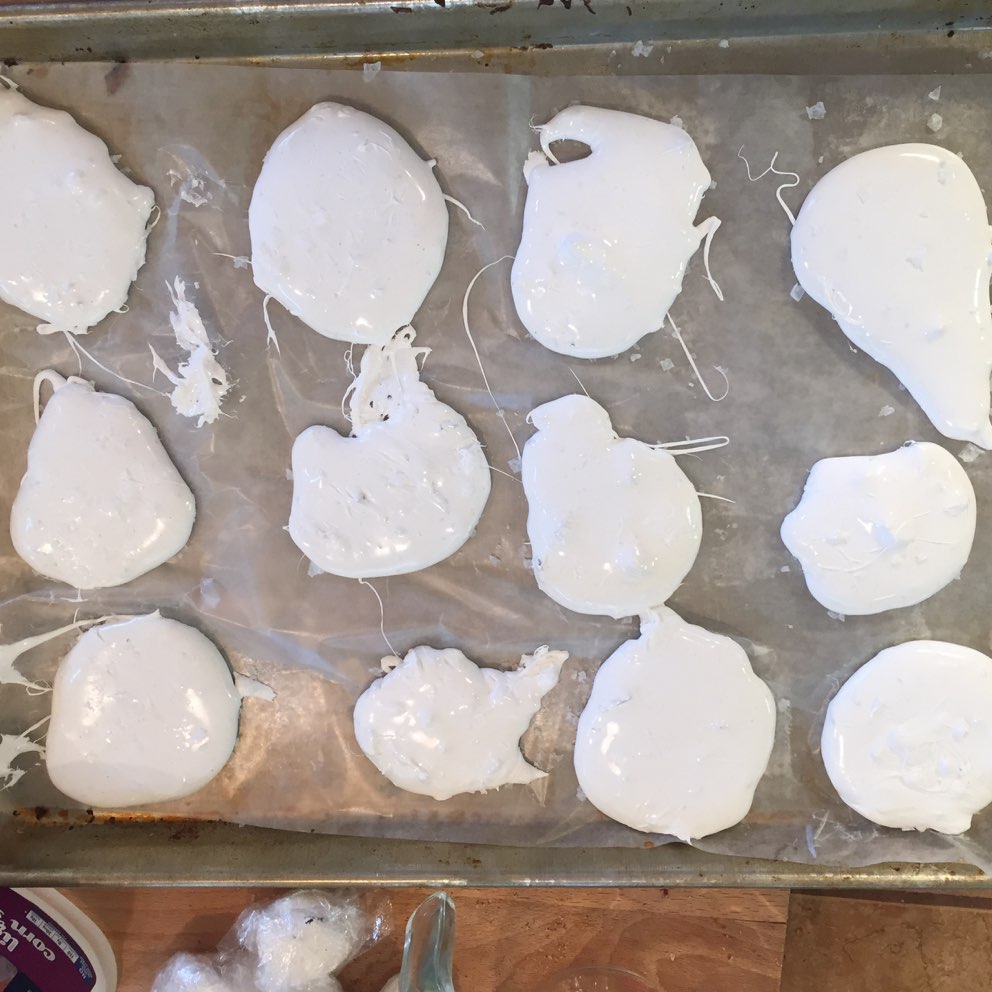 We made divinity again like last year. Again, we used the Paula Dean Recipe (local) but I think that was a mistake. It was so sticky. We could barely work with it. It stuck to the parchment paper and everything else. Also, it wasn't as good this year (as our second last year) but that could also have a lot to do with the fact that we made it about 5-6 days before we ate any. Also, we did salt them but didn't use salted nuts. I liked the salted nuts in there too. And, again, as noted above, we adjusted for the altitude.

I looked at some other recipes that seem to use less sugar. I think I would try that in the future. Also, I will lay them out of silpats since they won't tear while peeling them off. 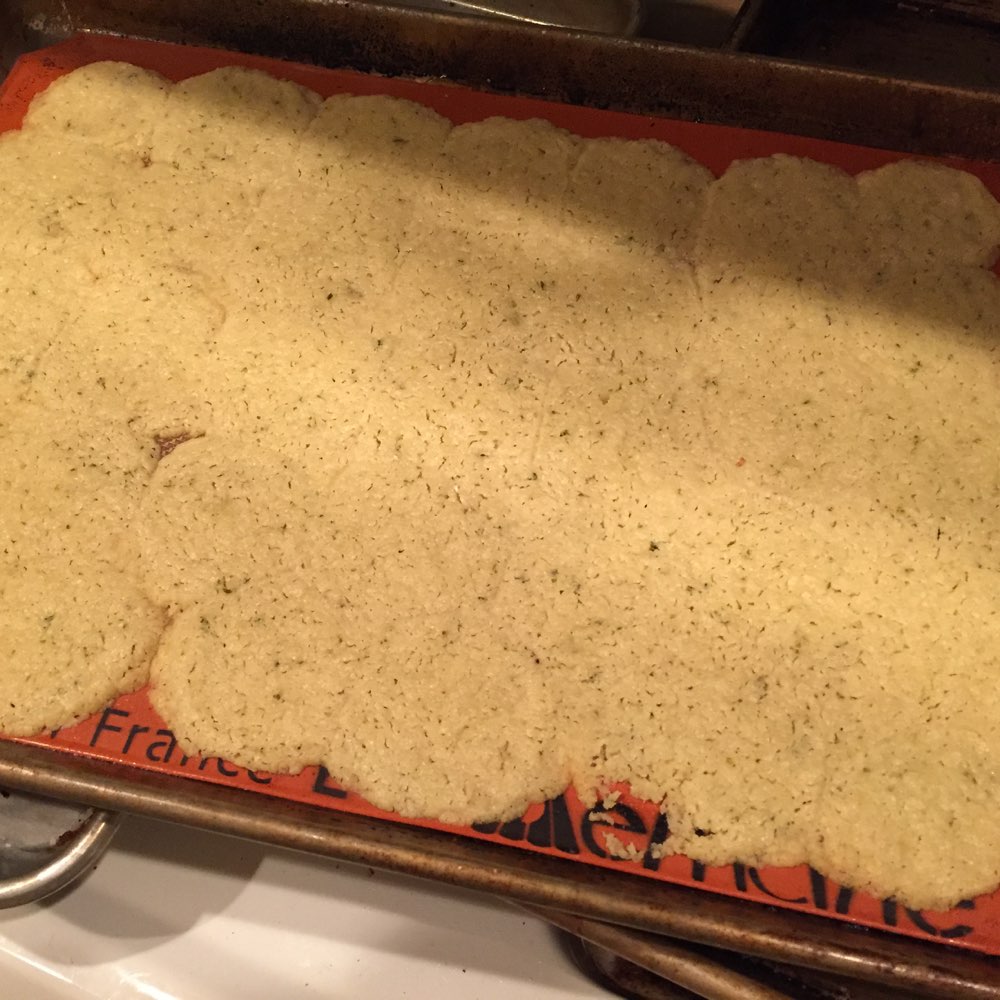 We [tried] to make Rosemary Shortbread again like 2015-11-06 with this recipe. The only difference to the recipe being that we didn't want to use the egg-wash and we went heavier on the rosemary.

However, we somehow really messed it up. While we prepped everything over the weekend, we wanted the cookies to be fresh so we prepped the dough, then refrigerated it for two days. Then we warmed it enough to roll into a log (we wanted to make them round and this is an easier way to cut them).

Well, the combination of the refrigeration and everything must have messed them up because they spread everywhere on the pan. Or, it could have to do with the silpat, but I highly doubt that. The crumbs were amazing though!