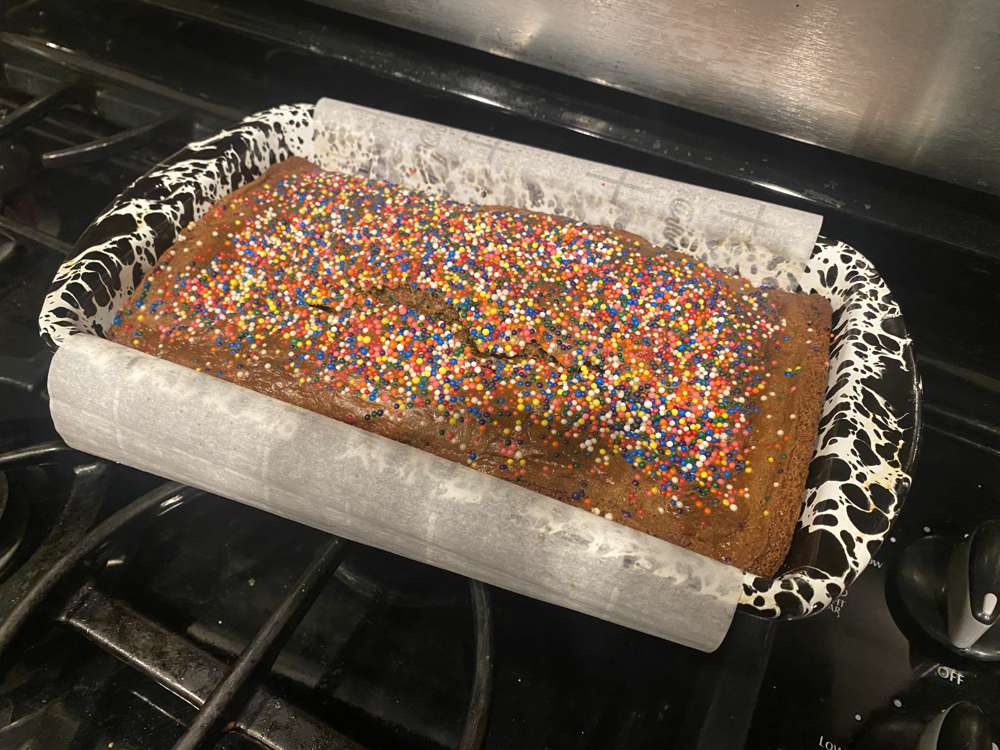 It was pretty good. Oddly green at times (from the sunflower seed butter?) but tasty. 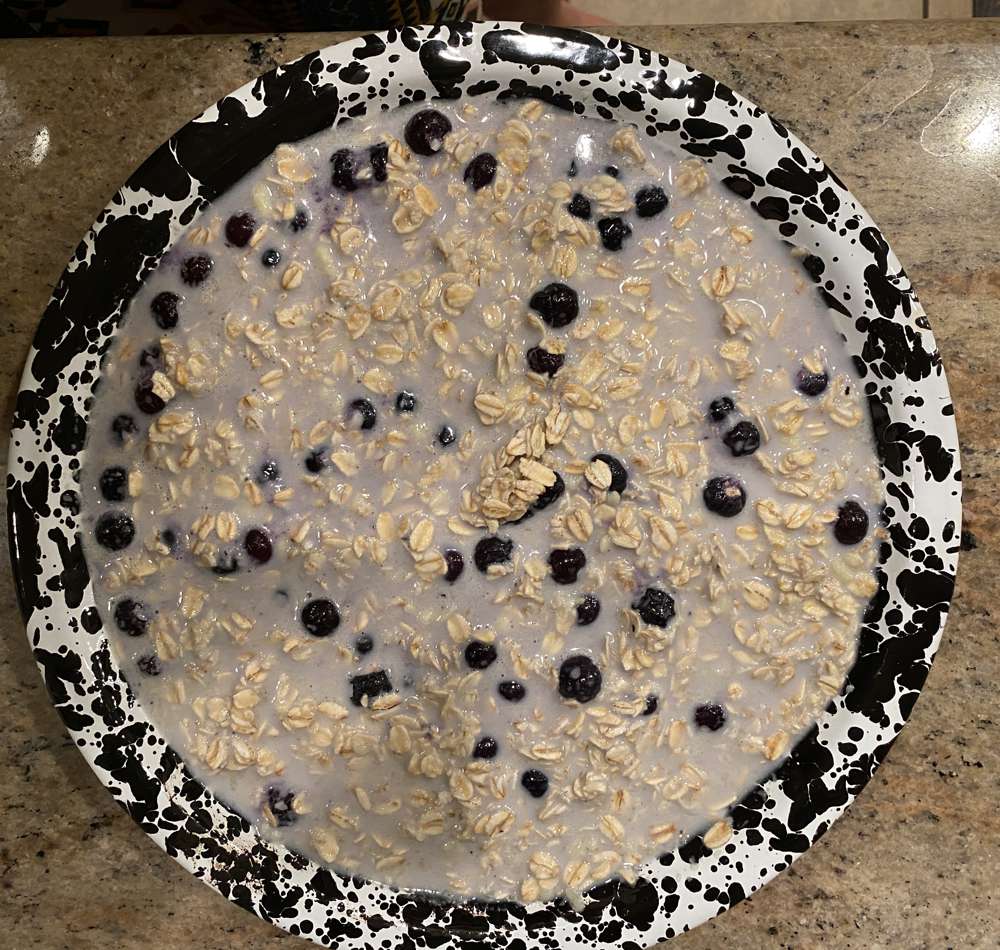 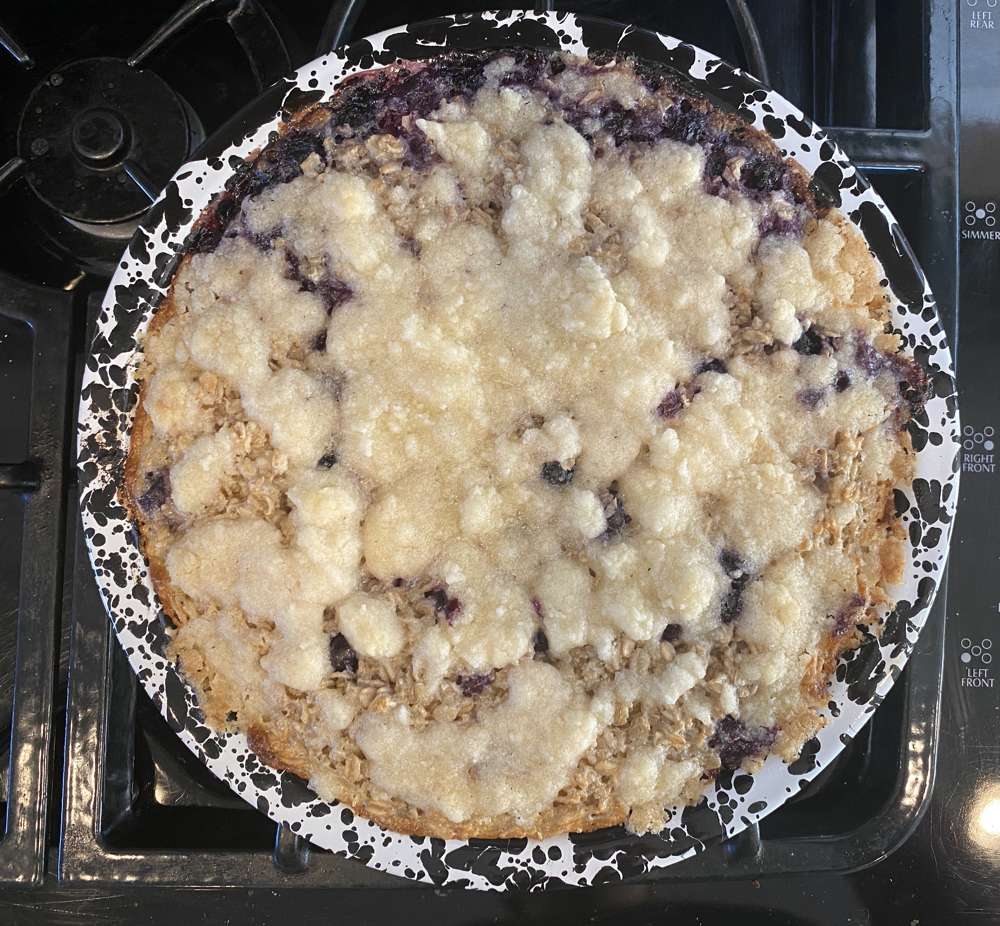 Meredith made Overnight Baked Blueberry Muffin Oatmeal from A Beautiful Mess (LOCAL). We all really liked it; especially Caroline! 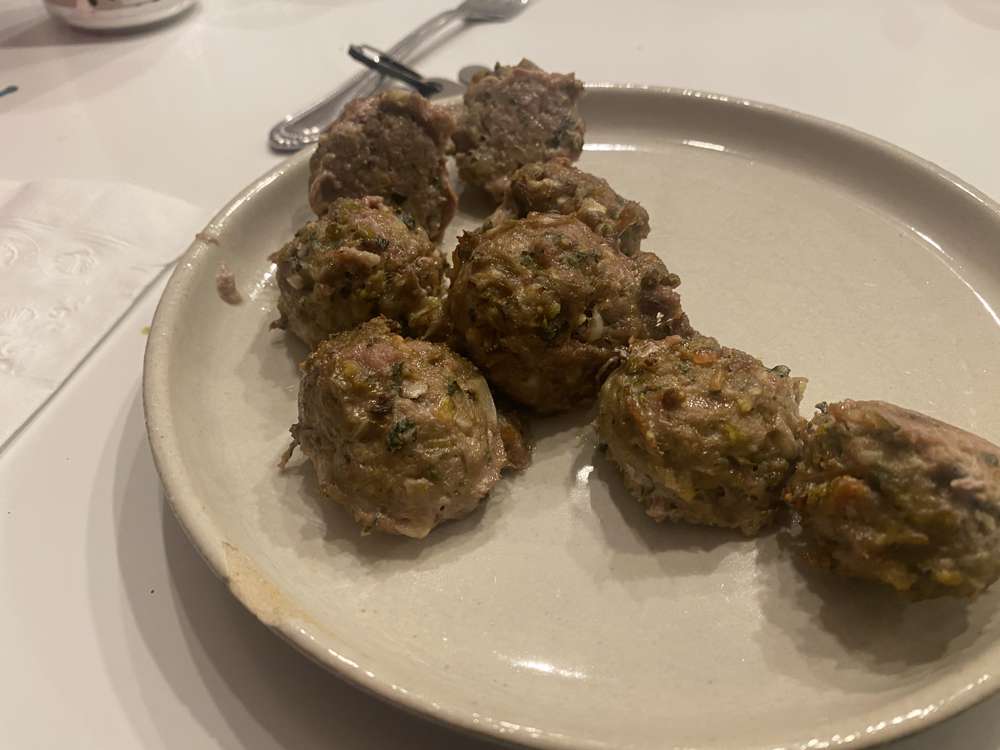 I made a new adaptation of the Lamb and pistachio patties with sumac yogurt sauce [Ottolenghi Simple] (which we already usually do with turkey). Using 1.5 lbs of lean turkey, instead of arugula, I used 40-601 grams of garden-fresh basil. I also did about 1.5x the pistachios (which is also common).

I actually prepared them on Sunday and then shaped and baked them today in the oven.

We thought we went too heavy on the basil but it was perfect. Strong but nowhere near overpowering flavor. We served them with jarred marinara sauce and it was delicious. We will do this again to use up basil 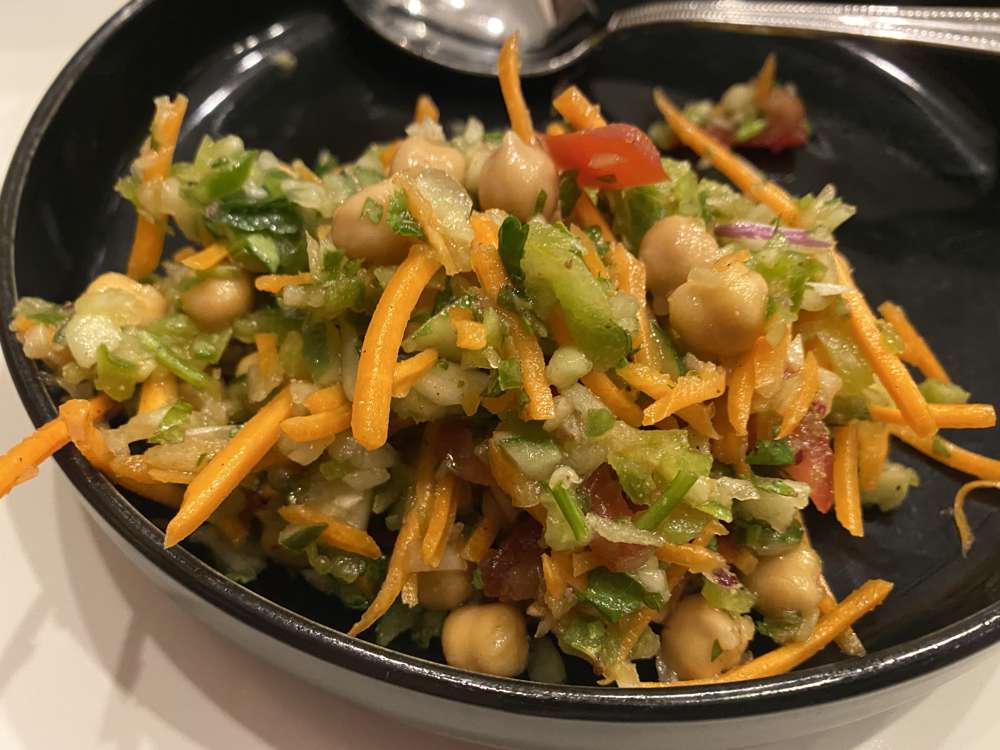 Meredith made Chickpea Chaat Salad [Cook Republic] except since it took so long to chop last time, she used the food processor for everything but the tomatoes. Much easier.

It was good like last time. The crunchiness of the toppings really help bring it together. 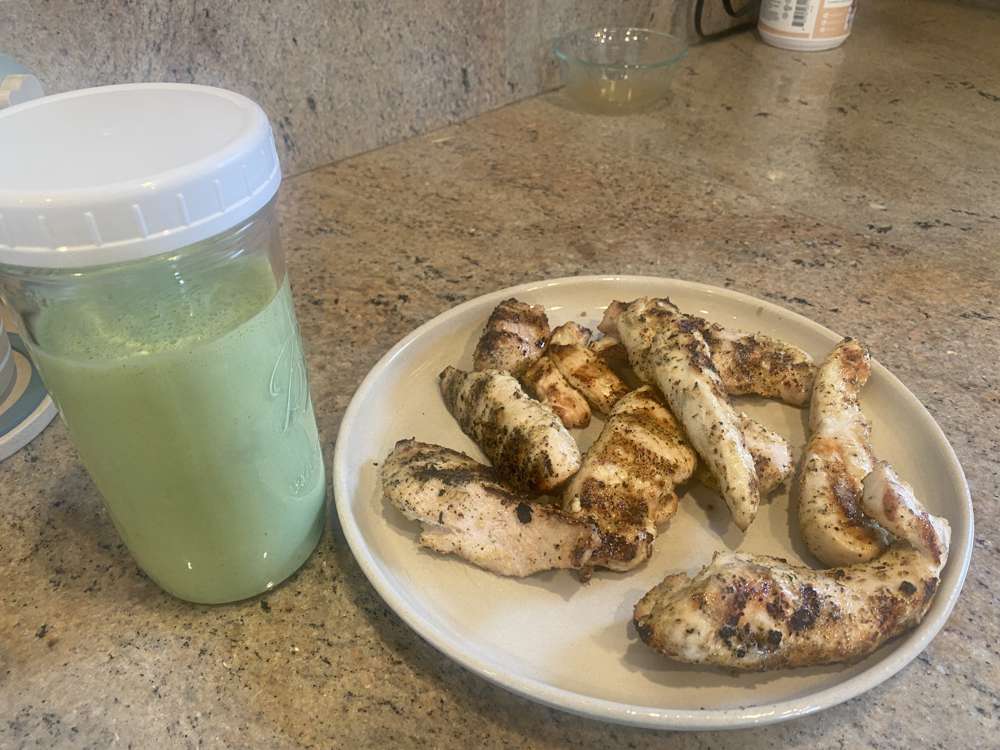 For the dressing, it was loosely based on the Peruvian chicken sauce. It was a rough attempt but needs work.

I added the mayo later and wish I hadn't. It didn't add much other than calories. I think next time, I would use greek yogurt to thicken it rather than regular. And maybe a few more seasonings. 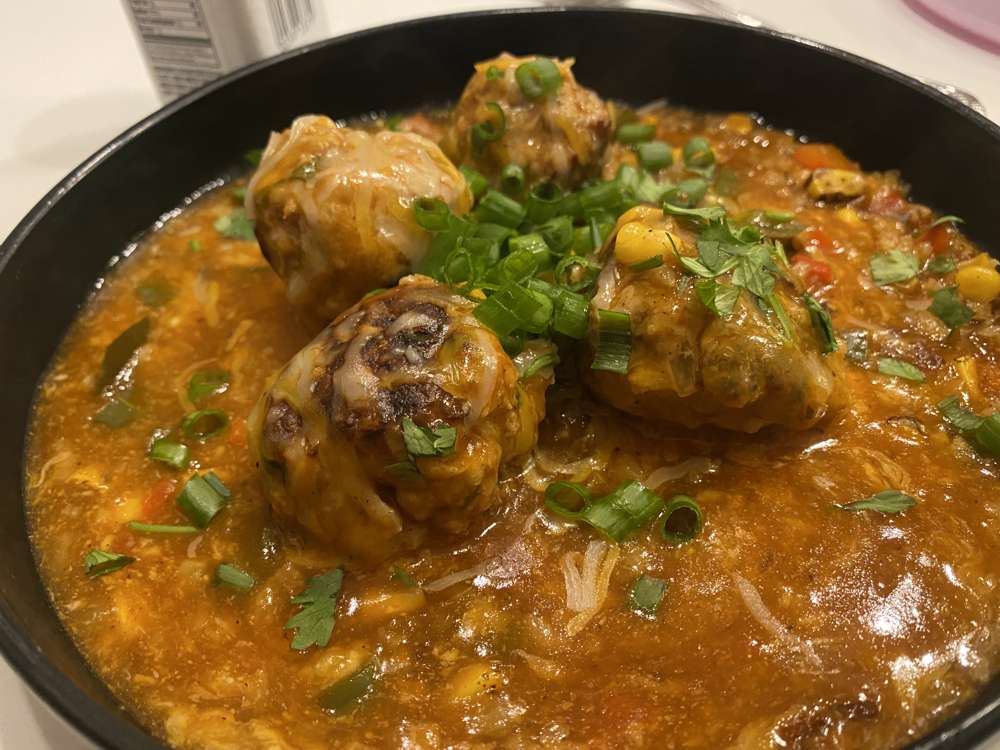 First and foremost, the timing on the recipe was way off. It took nearly an hour to get all to cooking the meatballs. We ended up cooking half (to eat at the meal) in the pan and baking the rest (way easier!).

We also decided to use cauliflower rice. Since regular rice absorbs liquid to get bigger, we went heavy on the rice. However, we did not reduce the liquid so it was super wet. We will use a grain next time (quinoa?) to help with that.

We would make it again for sure! But (a) plan longer, and (b) bake the meatballs. 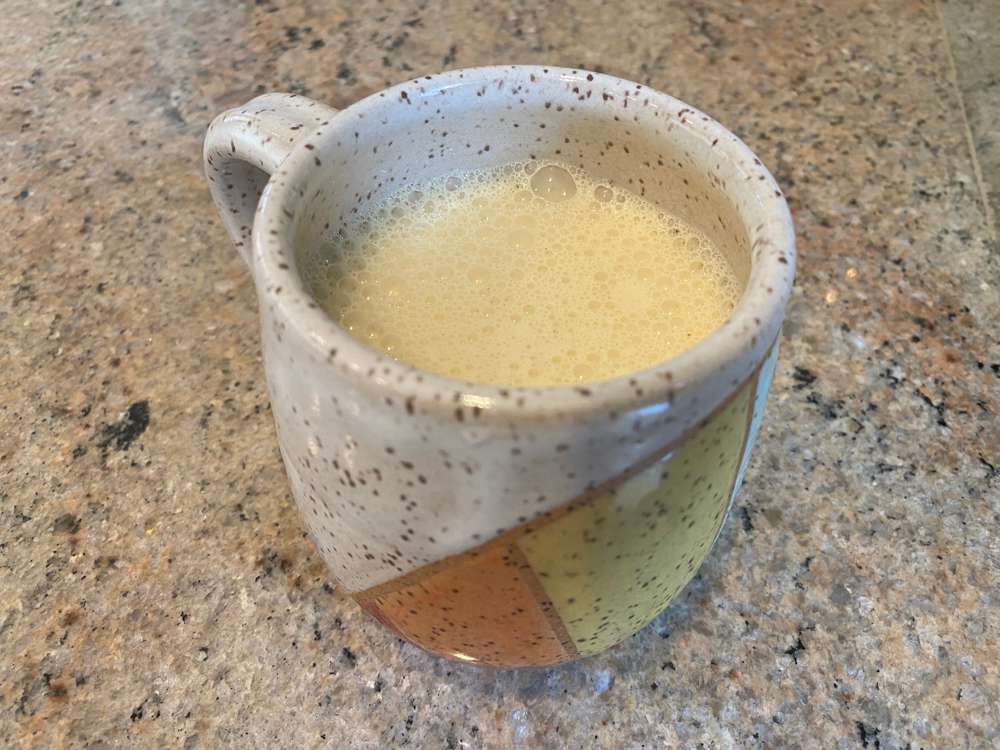 Meredith made a Lemon Meringue Latte from Liz Moody (LOCAL). She did 1/2 recipe, using mix of macadamia milk/coconut milk with a splash of vanilla extract. Subbed collagen for the gelatin.

She liked it. It’s not as sweet as expected, but pretty good. 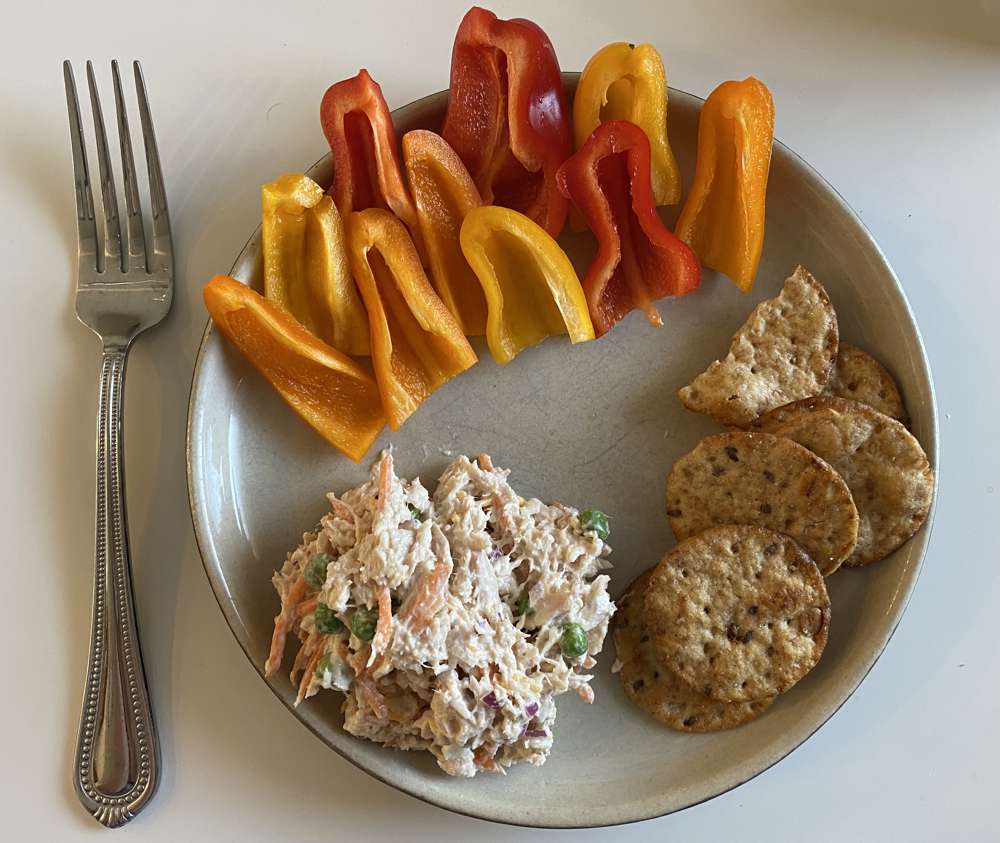 Meredith made Deli-Style Tuna Salad from A Beautiful Mess (LOCAL)

My cans were 5oz each, so went a little light on the tuna at 10oz. Also, skipped the cayenne in case Caroline wanted to try it. I needed to add a couple extra spoonfuls of greek yogurt to get it to come together. And the cheese I think is shredded Monterey Jack.

Overall it reminds me of those little tuna salad packs they maybe still sell that have a tube of Mayo, a packet of sweet relish, and a can of tuna. You mix it all up with a wooden spoon and eat it with the crackers that come with it.