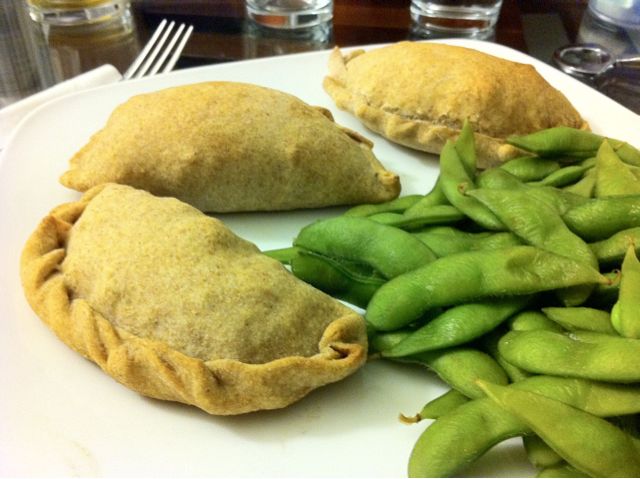 The empanada idea was roughly from this and the dough was roughly inspired by this. For the dough I used 1/2 cups all-purpose and 1/2 cup whole wheat flour. I added ~1 Tbsp melted Smart Balance light, a Tbsp of egg beaters and salt. I then added skim milk until it came together. I ended up adding too much so I added another 1/4 cup whole wheat. I let the mixer knead it for a pretty long time. In the end, the dough was very nice. Easily rolled and pliable. There were no holes in the final product either. Extra kneading did a lot. The dough did have a nice buttery taste and was soft. And, still low points. I think I may use this on Samosa next time.

The filling was 6 oz 92/8 ground beef and 2 oz extra lean ground turkey. We added a lot of Adobo powder (very good!), some cumin and oregano. We also sautéed 1/2 an onion, some garlic and a bunch of minced Serrano chilli and some frozen corn. The chile did not add as much flavor as we expected but in the end, it was very, very good. The adobo was a nice new flavor (though, for better or for worse, it has MSG).

Even though it does not necessarily go with it, we had steamed edamame. Very good!

Dough (total, made 6): Around 4 points all purpose plus 4 for whole wheat. Around 1 for butter and egg. Around 2 for skim milk.

The filling was 8 total for the meat. So, 19 total or 3/empanada