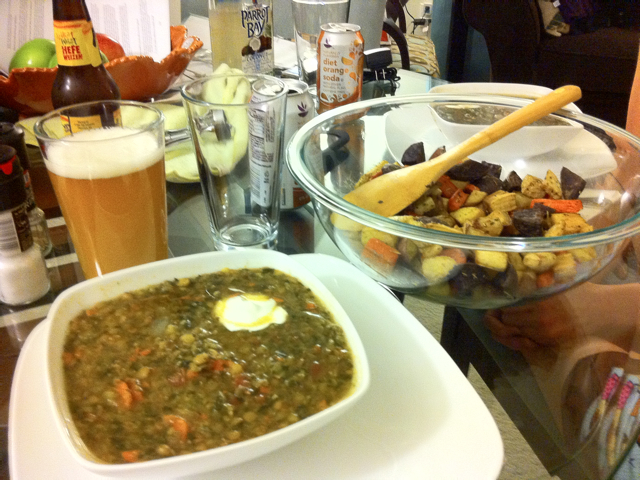 This meal was a "meat-free" meal. But, it wasn't really because we used chicken bouillon. But, it could have been! And there was no meat dish.

The soup was incredible! I roughly followed this but I ended up adding water to thicken. I also immersion blended some of it as per Alton Brown's suggestion. I do not totally understand their calorie count but I did not use oil so that would reduce it. See below for points. Also, we used frozen spinach mixed in at the beginning. It was fine. And we threw some parsnips in too.

The root vegetables were potatoes (same mix as the other day), carrots, parsnips, and turnips. I think they were under seasoned a bit and needed salt but they were still good. The purple potatoes really added to the color of the dish.

Veggies are harder to count but figure they are all as bad as potato (they aren't) so even it out to 6 points/pound. It was probably 3 pounds which made 4-6 servings so 3/serving