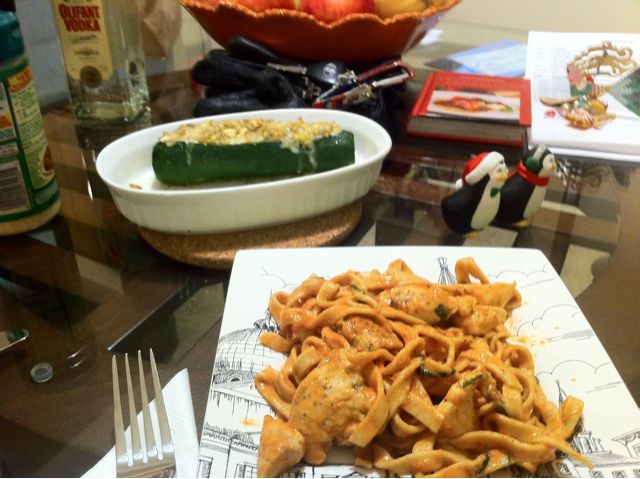 This was a very good meal. Sadly, we assumed it would not be as bad as the points ended up being but it is hard to say because the vodka in the sauce cooks down a lot. Oh well, it was worth it.

We made pasta from the recipe below (halved. I think we used that recipe before. As before, it needed more water but I was careful with how much I put it in. I gave it a good amount of time kneading in the mixer and the resting helped. I also made sure everything was very, very well floured when it came to rolling and waiting to go into the water. The pasta came out very good. It had a nice texture, consistancy and flavor. I also added some garlic powder and pepper (but very little of both) to the dough. It made two very big servings. The pasta was 9 points Plus per person. A lot but worth it. Also, we had some chicken on it for protein.

The sauce recipe is also pictured below. Meredith had handwritten it a long time ago so I took a photo. The major changes here were we used fat free evaporated milk instead of cream and used smart balance instead of butter and only used half of what it called for. It was very good and didn't really taste fat free.

Finally, we made a stuffed zucchini thing. I cannot post the recipe because it was from Meredith's Italian book...in Italian. It had feta (we used lite), mozzarella (we used fat free), garlic, onions, dill and some other stuff. The recipe called for nuts which we skipped. Meredith may bullet point the recipe. In that case, I will include it later.

Vodka...~8 (who knows because a lot does cook out)

figure 7 each because who knows about with the vodka

Okay, this meal was a lot but it was very good and worth it every once in a while.

In a large frying pan over medium heat, melt the butter with the cream. In a small bowl, dissolve the tomato paste in the vodka. Stir into cream mixture and add basil plus crushed red pepper. Season with 1 tsp salt. Cook until most of the alcohol has evaporated and the sauce is thick enough to coat the back of the spoon; about 5 minutes