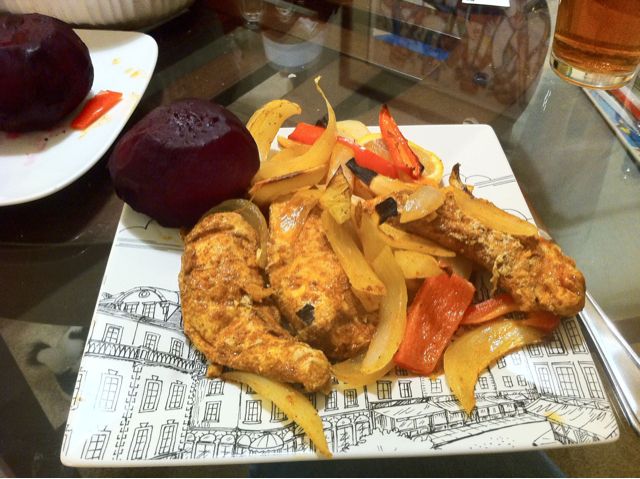 The chicken was from the recipe below off of the Whole Food Blog. We halved it and made a few changes. We halved it and used 5 chicken tenders. ALso, I do not know what the exact type of paprika we used but it is the normal, innocuous kind. Also, I used olive oil. Since we did not have white wine vinegar, I used half white wine and half apple cider vinegar.

Since it is boneless, skinless, lean chicken, I did not bother basting it. Plus, all of the chicken was under a rather hefty layer of onion and peppers. A note for the future, to coat the chicken with the paste, I put them all in a bowel and used my hand. Same with the onions.

It was okay. Certainly not incredible. I felt like the seasoning was a bit strong on the outside but the chicken could have used some kind of marinading. The onions and peppers on top were really good!

The Beets were pretty easy. I was crunched for time so I cut off the stem and base, then I microwaved them for 3.5 minutes. I then sprayed them with olive oil pam and put them in aluminum foil and baked it with the chicken at 425.

They were not cooked enough but we ate to eat them anyway. Also, peeling them was not as easy as many sites say. I cooked one of them more in the microwave but it had already been peeled. It developed a secondary skin in the microwave. Still, they were good

There are some points from the olive oil but it is relativly small. So the points really are only from the chicken.Beets are zero