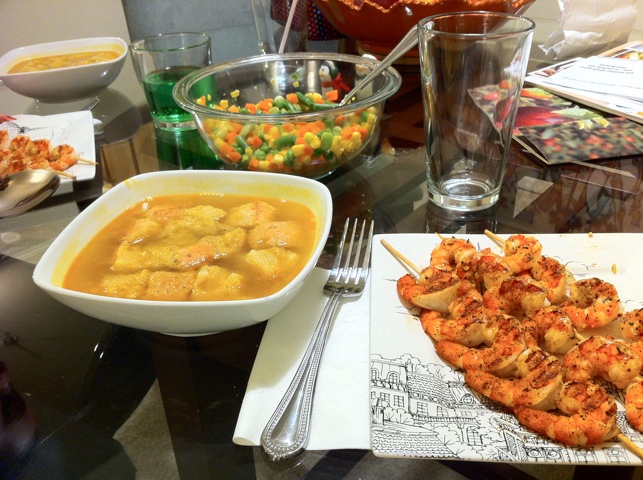 The shrimp were cooked on the griddler with each skewer having a different seasoning. They were Old Bay, then Trader Joes 21 Seasoning Salute, and McCormick Caribbean Jerk Seasoning. They old bay was the best and the other two were okay but not great. Still, the shrimp were good and rather filling. Shrimp is great because you can eat a half-pound for very few points. It is high in cholesterol so we do not do it often. I think this may be the first time I did not over-cook the shrimp too!

The soup was more interesting. It is based on the recipe below but with some changes. We replaced half of the smoked, hot paprika with regular and we put bread in at the end. We had french bread from something else so, even though it was higher in points, it was really good. Putting the bread in at the end make it not be as soupy but we liked that more. Also, we skipped the egg all together. Finally, we used half low sodium Better Than Bouillon and half the sodium free powder. Even with half the paprika replaced, it had a nice spice.

The vegetables were just frozen ones.