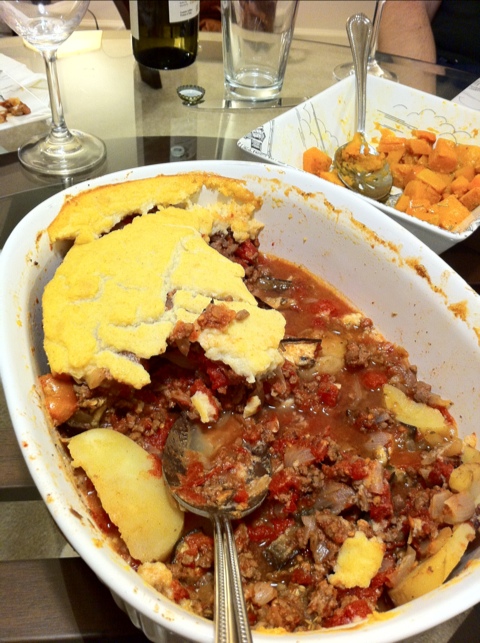 We were having company over so we went for a full three course meal. Sadly, in the rush of getting everything out, I didn't get a good picture but that is fine becuase we didn't really do too much new stuff.

We made french onion soup just like we have in the past but we made a bit more. About 6 cups of broth (mix of beef and chicken) with about a cup of white wine. It came out pretty good. I do not remember if it was 2.5 or three onions. I will have to ask Meredith.

We made the moussaka as we have in the past (with points on that last one). It was good. We made it the night before and refrigerated it. I think that caused the bechemel sauce to crack differently but it was still good. It was actually nice because we did it such that as the sauce cooks down (the longest part), we ate dinner the night before. It made this a less intense meal for one night.

We also had roasted butternut squash and steamed broccoli. I think we over-roasted the squash but both Meredith and I like it mushy so it was not really a bad thing. The broccoli was normal and good.

For dessert we made bread pudding again from the same recipe. We again only used half brown sugar and half splenda. Meredith also added more splenda but I will have to check with her on how much. We also added raisins which was really good. This time we used bananas as the recipe calls for. Also, we used whole wheat bread to make it healthier. With the extra splenda, it was really, really good! We will have to do this again.

We topped it with Trader Joe's Frozen Yogurt.