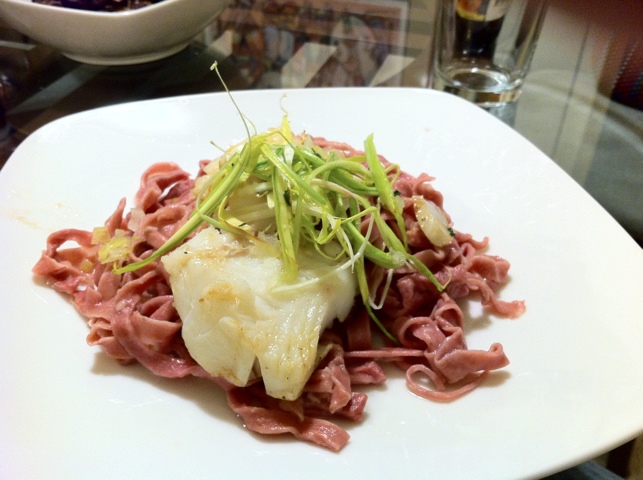 This was a good meal largely inspired by this blog post but with some serious changes. The thing is that their pasta recipe calls for 7 egg yolks though we would have halved it anyway. And it just doesn't sound healthy at all. We made the concession of just using white flour but that was too much egg. So we used egg beaters. Also, even though we had beets (which we roasted later), we did not have time to roast them first so we used canned and then purreed them. Well, still, it all came together strangely. I had to play with the dough a lot to get it the right moistness but it was a very, very streachy dough. After letting it rest for about 35 minutes we started rolling and cutting.

This dough was okay to roll but it did not want to be cut. We had to manually tear the cuts apart. And it was still very, very streachy. I also thought it would all stick but thankfully, in the boiling water, it came apart. I used a lot of salt in the water which did add a nice flavor to the pasta. It ended up fine and tasted good.

We basically followed their lead on the cod but it came out a bit salty. Also, despite our best efforts, it stuck to the pan a little bit. It was thankfully not over cooked but it was salty. Meredith liked it more than I did. Also, we used chives as a garnish/side.

Meredith found a few recipies and made a white wine sauce sans cream/milk, etc. It was okay but very thin. I like the shallot and leak scraps in it. I though they were good even if the sauce was thin.

Finally, we combined the beets we were going to use with some purple majesty potatoes and roasted them with olive oil, garlic and seasonings. It was funnybecausethey were very hard to tell apart until you were in a different light. They were also good.

I had an interesting observation when making this. I have noticed that every time I have made pasta (not including ravioli), the seemingly straight strands twist a lot aftercomingout of the water. If you look back, this is fairly evident from the pictures. Today, while eating, I remember reading a thing about different dough kneading techniques and one of the things they said about using the stand mixer (mypreferredmethod), was that it creates twisted gluten strands. I wonder if that is what was happening in the pasta and the twists cause them to curl in the heat of the water. Of course, I could imagine the twists counter acting each other but maybe a trendprevails. Just a thought. Maybe next time I will just use the food processor and compare. In that case, it is fully kneaded in like 3 minutes which seems too fast but we will see.