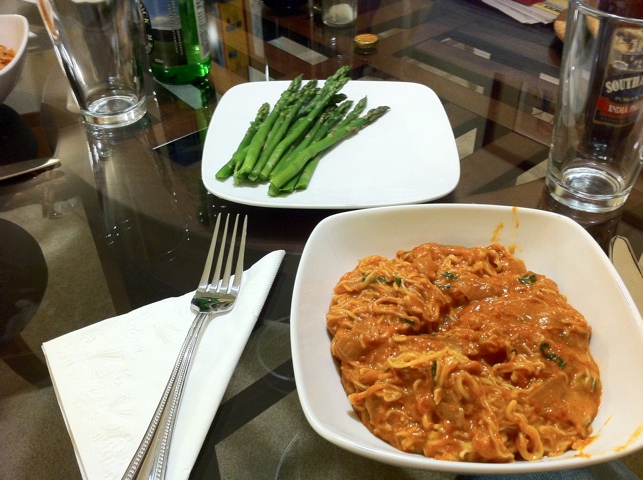 I was really excited about making this but it was dissapointing. I basically followed the recipe below but without pine nuts and I replaced the half and half with non-fat evaporated milk and some whole wheat flour to thicken it. Also, we added Thai basil (we didn't have regular basil)

To roast the peppers, rather than just put them inder the broiler, I slided them in half first. This was great because I did not have to rotate them and it was easy to later peel them.

Anyway, the peppers were good (I had a taste) but the whole sauce did not have much flavor. I do not know if it was the milk or not but the only real flavor was the Thai basil. Also, of note is that Thai basil does taste different.

In the future, if I am replacing cream or milk, I am going to use almond milk. The evaporated milk just isn't as good. Also, I may have used a bit too much flour becuase it was really thick.

Also, we had it with Shirataki noodles instead of pasta.

With the noodles, this meal was very low in points. And we had steamed asparagus on the side.