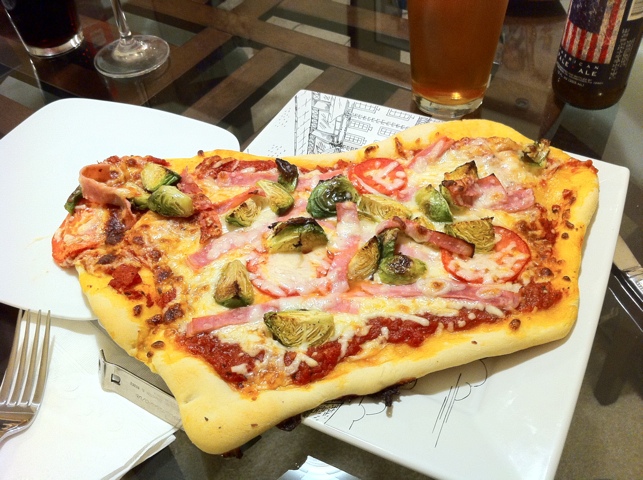 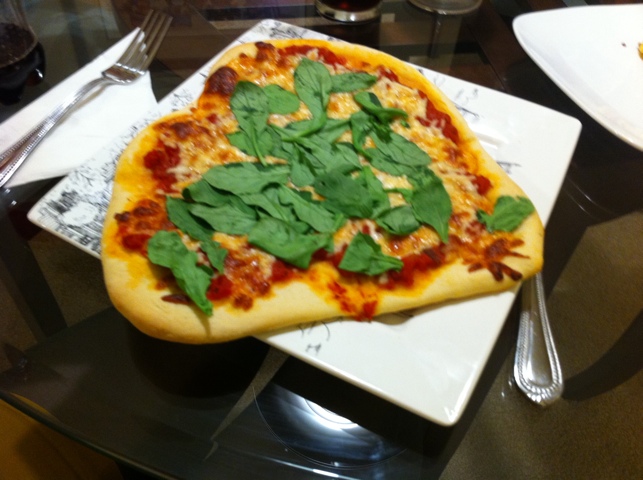 We tried making pizza again but in an attempt to finally get it right, we used a different pizza recipe with all white flour. The dough stuck to the hook so I kneaded it by hand. Either way, it was much nicer dough but we still had problems. We tried to just stretch it and not use a rolling pin but both of outstretched un-evenly and we had a hole.

We both ended up using the rolling pin which was hard because the dough was very springy and kept springing back. Also, the shape of my pizza came out really bad.Because I was doing it on the back of a cast iron pan, the strange shape made it fall over on the edges. Oh well.

We used low fat mozzarella cheese. They were out of the fat free cheese but the low fat wasn't awful nutritionally and it was really good. I also made the pizza sauce. It was canned tomato which I immersion blended mostly. I then added some tomato paste, and a bunch of dried oregano and basil. I also added garlic powder, onion powder, salt and pepper.

Meredith's pizza was just cheese, sauce and arugula. We first cooked the pizza then added the arugula and threw it back in the oven for a minute. My pizza was cheese, sauce, brussel sprouts, sliced tomato, and lean ham.

The toppings on mine were good but I was not happy that so much slid off. Meredith's pizza was also good. The arugula adds a nice and unique flavor.

The dough recipe is below.