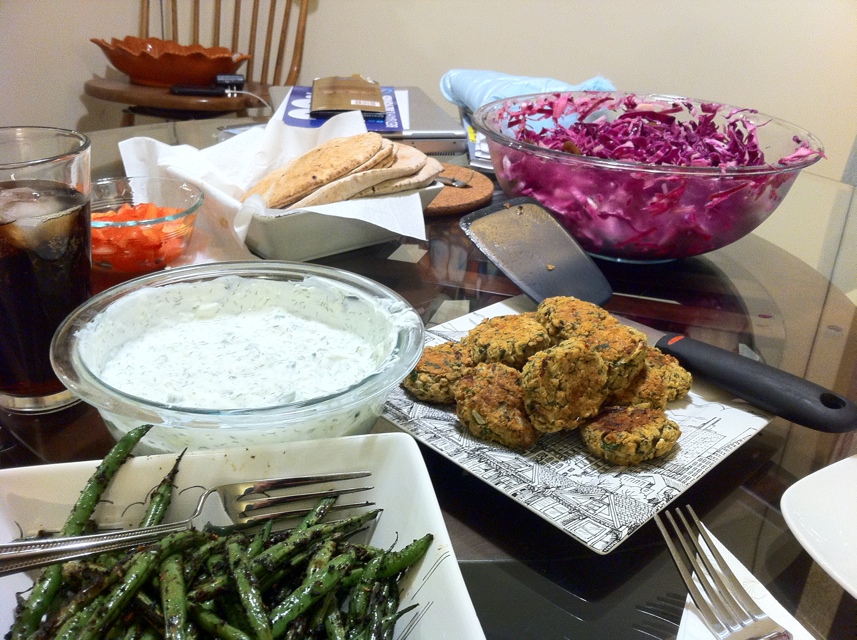 We had quite a variety here. I will start with the Falafel which is from the recipe below. We basically followed it as stated except we used dried cilantro, more red pepper, and I added some additional garlic and onion powder. I used flat leaf parsely but that shouldn't make a difference. Also, I let them cook a bit longer with the last few minutes at a higher temp to try to make themcrispier. The falafel was really good. It was not the best I have ever had but considering it was baked and actually surprisingly healthy, I can't really complain.

The Tzatziki was also from the recipe below. Meredith made it and she said she basically followed the recipe except she used non-fat greek yogurt and no Ouzo. Also, we let the food processor grate the cucumber for us. Deseeding it was important as it really makes a difference in having a thicker finished product. We both really liked the recipe and we will use it again. Oh, and we used dried dill.

Meredith did the lightly pickled cabbage. I do not know what recipe she used. I thought it needed to be a bit more pickled but that is personal preference. I will post the recipe or at least a link when I get it. Or, it may be in the comments.

Finally, thegreen beans. I wanted to avoid salt so I used Trader Joes 21 Seasoning Salute. I think I may have let he seasonings blacked just a bit too much.

We used whole wheat pita bread. Next time, I want to make it myself.