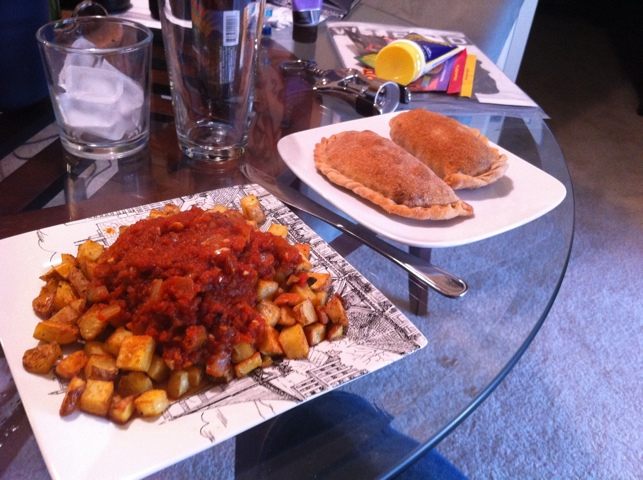 We made empanadas using the normal dough recipe (internal link so not included). The filling was similar to the past but I did some things differently. It was 1/2 an onion, some zucchini, ajalapeopepper, a hot banana pepper, and beans. Then, on top of that, I added some salt, pepper, habanero tabasco, a bit of peanut oil (very little), and a tad of white vinegar for some bite. Also, with the addition of some salt in the dough (updated that page), everything was very, very tasty.

The patatas bravas were also similar to previous attempts. I based the sauce on the recipe used previously which I am also copying below. I pureed the tomatoes mostly (leaving a few chunks) _before_adding it. I forgot the bouillon but it wasn't missed. It probably could/should have simmered a bit more. While I followed their sauce, I did the potatoes the easy way. I just roasted them untouched at 400 for about 45+ minutes. Actually, I added some paprika to them as well for the roast (in addition to the normal salt+pepper). Also, despite making the amount of sauce for 4 lbs, we used fewer potatoes. I didn't weigh it but it was a reasonable amount for two people. (maybe a bit too much)