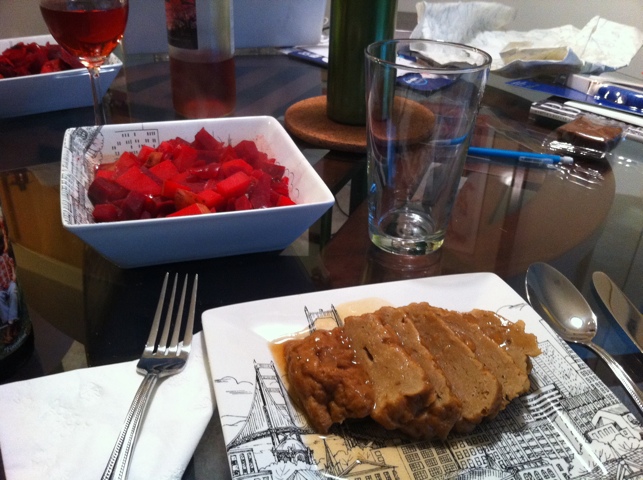 I was very excited to finally make seitan. I followed the recipe from my dad's book. The gist is, 1 cup vital wheat gluten with 3/4 cup water (it came together with a bit less). Knead for a while, let sit for 20-30 minutes, roll into logs, simmer covered in simmering liquid for 1-1.5 hours. I made the simmering liquid with 5 cups light broth (I blasphemed and used real chicken broth since I didn't care about the vegetarianism), 1 cup white wine, 1/3 cup soy sauce. I took it off a bit early because I like it firm. It was a bit too firm. Also, while it expanded in the liquid, it then shrunk again. Overall, I thought it wasn't as good as when my dad made it. I will need to play a bit more, cook it a bit longer, and use it in something rather than just as the main dish.

The borscht was AMAZING! We used the same recipe as last time. Again, we used real mushroom over the dried (and not many of them). We also went heavy on the beats, light on the potatoes (Yukon Gold with the skin on), and we didn't have carrots. Other than that, we basically followed the recipe. We used Texas Pete hot sauce (we had samples of it) but I didn't really taste it. We also used the beet greens but Meredith carefully double washed each one (we had gritty beet greens last time and these looked extra dirty). I do not know if it was the beets or something else but this was just very, very good. Really sweet despite not much sugar. We willdefinitelydo it again since it was easy and very good. We only stained a few things with the beets so that was also a plus.