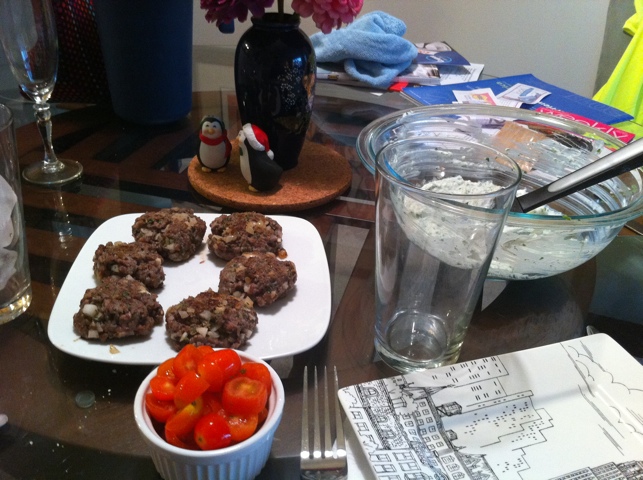 We made beef koftas based on the recipe below. Basically, we just subbed extra lean ground beef (around 0.75 lbs) for the 1lbs of turkey. We used ground cumin and coriander so we skipped the toasting of the spices. We did use fresh mint but dried dill.Finally, I screwed up and put too much salt into the beef. I didn't read the "divided" part. Thankfully, I thought it was too much so I didn't do all of it. Also, I just used grill-pam with the cast iron pan instead of oil to cook the beef.

They were salty but really good. I do not know if is was the salt but they were surprisingly moist despite using such lean beef. We liked the flavor quite a bit and we will do them again. But, less salt!

Meredith made her owntzatziki but I do not know her recipe. She also added some fresh mint since we had it. I didn't really taste the difference with the mint but Meredith said she liked it less.

Recipe moved to My Recipe Book