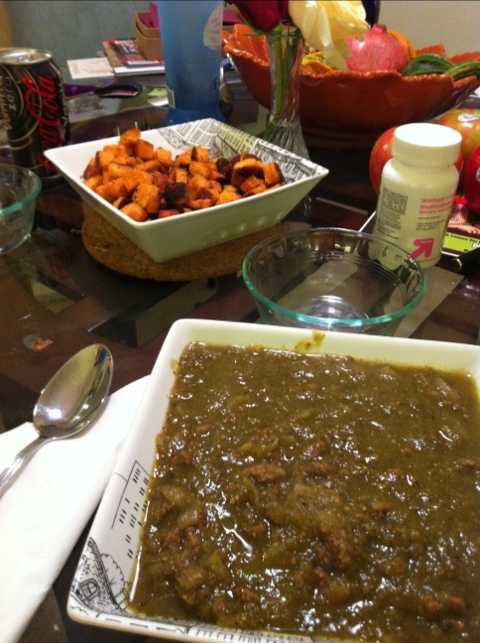 We made Chile Verde from the recipe below from Serious Eats. We made a few changes including using 1.5 Poblanos (and cutting them before roasting), more garlic while roasting, ~3/4 lbs of lean beef instead of pork and added garlic and onion powder. We also browned the onions and then directly added the meat which is what we usually do (since we use such lean beef, this works better). Also, instead of using a blender, I mixed the ingredients to be blended with the chicken stock and used the immersion blender. It was much faster and easier. We had to broil everything for almost twice as long as it called for. I do not know why. Maybe our broiler is less intense. Oh, and we forgot oregano. We also let it simmer for almost an hour.

The chile was very good but also a bit strange. Meredith and Iquicklynoticed a sweetness but we are not really sure where it came from. Maybe the tomatillos or the poblanos. Not really sure. I did like it though. And it was certainly different.

We also had roasted sweet potatoes. I peeled then par-boiled them and then roasted them at 425 for about 40 minutes. I should flip them next time half. The bottoms got crispy but the rest didn't. Still, they were extremely good! Must have beenreally good potatoes.