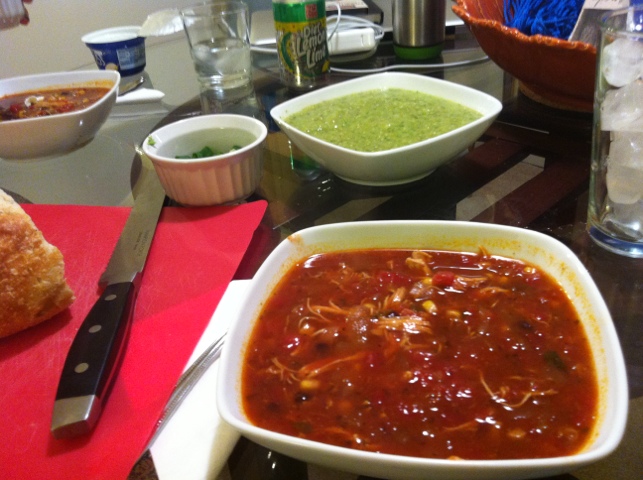 We made the soup from the recipe below. Generally, we have trouble with Crock Pot stuff since it takes too long to just do when we get home but not so long as to be doable before we leave for work. However, this worked wellbecausewe set it up and then ran (a lot) of errands. We followed the recipe surprisingly closely with the only change being half the chicken, extra adobo sauce, and I chopped a chipotle and put that in too.

The soup was very good. I was especially impressed with how easy it was to shred the chicken. This is definitly something I would do again. We also had a nice amount of leftovers

Meredith made the salsa verde from the recipe in Homesick Texan book (I'll add the page in the comments when I check). She basically followed the recipe except one of theavocadostasted funky so we didn't put it in. While we though it was our best attempt, it wasn't incredible. Too much lime (lemon?) and maybe something else, but I don't know. We toasted some whole wheat tortillas to dip.

We also had bread since I need to carb-load for the next day.