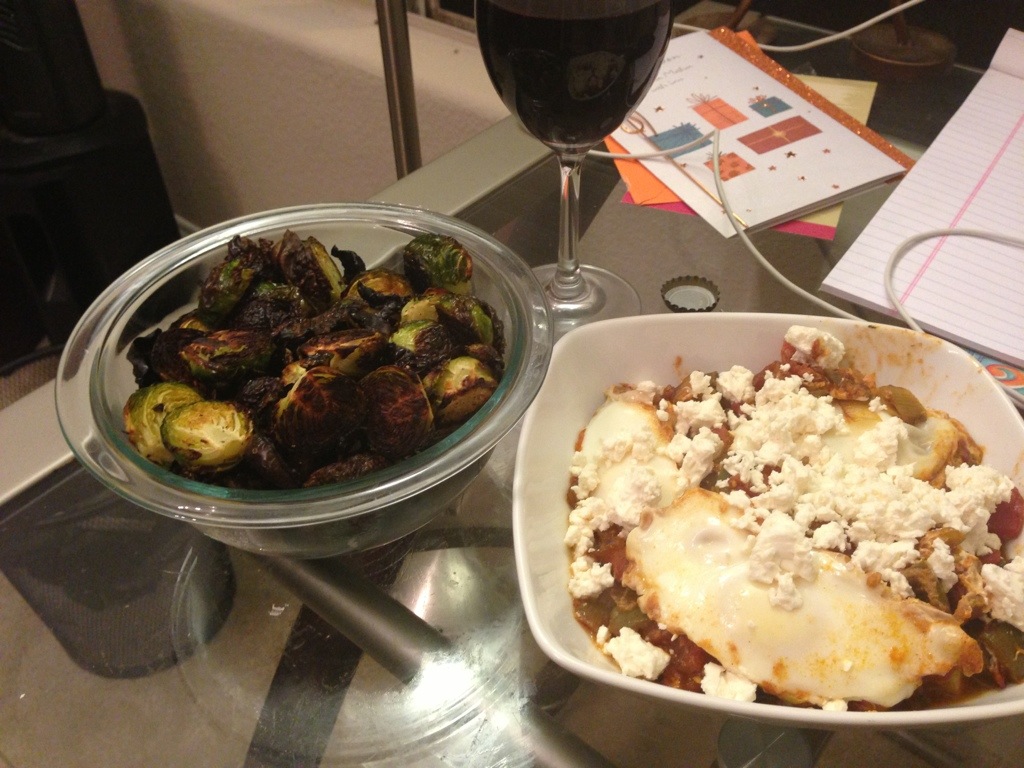 First, the brussel sprouts. It was a while ago that I made them so I had to refresh my memory of how I was doing it. I followed a Serious Eats recipe. I'll reiterate it here for future reference. I heated the oven to 500_with_ the pans. Then I put the halved sprouts on the hot pan. Some people recommended flipping it to cut side down but I decided to leave it as is. I had already tossed them with a bit of olive oil and lots of salt and pepper. Anyway, I put them on the pan and put them in the oven for about 20 minutes, rotating half way. One thing about doing it this way is you really have to watch the leaves that broke off since they will burn.

For theshakshuka, I followed the recipe pretty closely. with an extra serranoand a very largejalapeo. I also skipped theparsleyand used a mix of regular and hot paprika instead of the smoked. For both the paprika and the crushed red pepper, I used a lot extra. I also threw in some garlic powder. I didn't make any more changes that I can recall except messing with the times as needed. I was worried that the eggs were overdone but they were perfect. Since I wasn't doing bread, I wanted slightly harder (somewhere between runny and medium) and that is exactly what they were. I used lite feta instead normal. Oh, and I used 6 eggs. It made a lot but it was enough for 2 meals. (Despite what the recipe says)

I didn't really taste the fennel but it was my first time cooking with it and I liked it. I smelled it a lot while cooking. I wonder if I can do anything to add more of its flavor. I am sure I did taste it in there, but maybe not very strongly.

Shakshuka with Fennel and Feta (From A Sweet Spoonful)