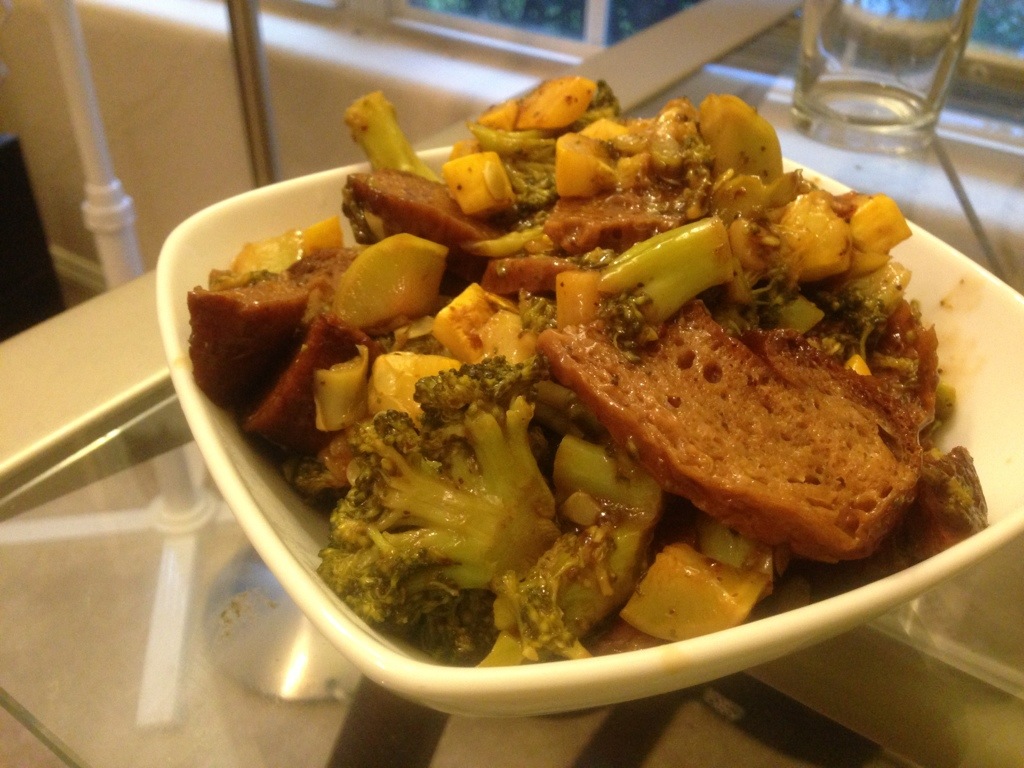 I made my own seitan and used it to make a quick version of the balsmic broccoli.

For the seitan, I googled for Mark Bittman's recipe and found The Messy Apron site which I used as a guide. I used

I put it all in the food processor with the dough blade on the dough setting and added the liquids. It splattered everywhere inside so I need to do it better next time. I let it combine and eventually added a bit more gluten. The food processor really seemed to chop it up and it took a while to combine. When it eventually did, it seemedlike it had been well chopped (not really a good thing). I let it sit for 20 minutes and then when I was going to cook it, I used my hands to streatch and mold it. Then it seemed to come together, look shiny, and be more what I expected. I think I should have done that before resting it (if it would work, not sure if the rest is what let it do that) or, at the very least, let it rest again for a while.

Anyway, to cook it, I read on the gluten box, to use the pressure cooker. I mixed:

I let it come to pressure and then I cooked it for 30 minutes (heat setting 3/10 on the induction burner) and let it naturally release (takes about another 5-10). They cooked up interestingly. There was a much more noticeable skin. Andthe bottoms were a bit more cooked and browned. Finally, the liquid turned into a syrup. I think Ishould have used heat setting 2/10.

As you can see from the picture, it was very airy. The final result had a nice texture and was pretty good, though too salty (reading over the ingredients, I am not surprised). I think I would consider the pressure cooker again if I am in a hurry but I was to try boiling it next time. Plus, then you havethe leftover liquid to let it sit in.

It made just under a pound of seitan

For the balsamic broccoli, I basically went for a faster version of my previous iteration. I added:

I added the squash to the pan and sauteed for a minute or so. I then added the sliced seitan and the broccoli. Finally, I added the sauce and let it all cook together.

The whole thing wasn't as good as prior times I did the balsamic broccoli. I do not know if it was the extra dressing or the lack of other ingredients. I don't_think_ it had to do with omitting the oil (and saving points!) but maybe.

The points for the whole thing came out really low: