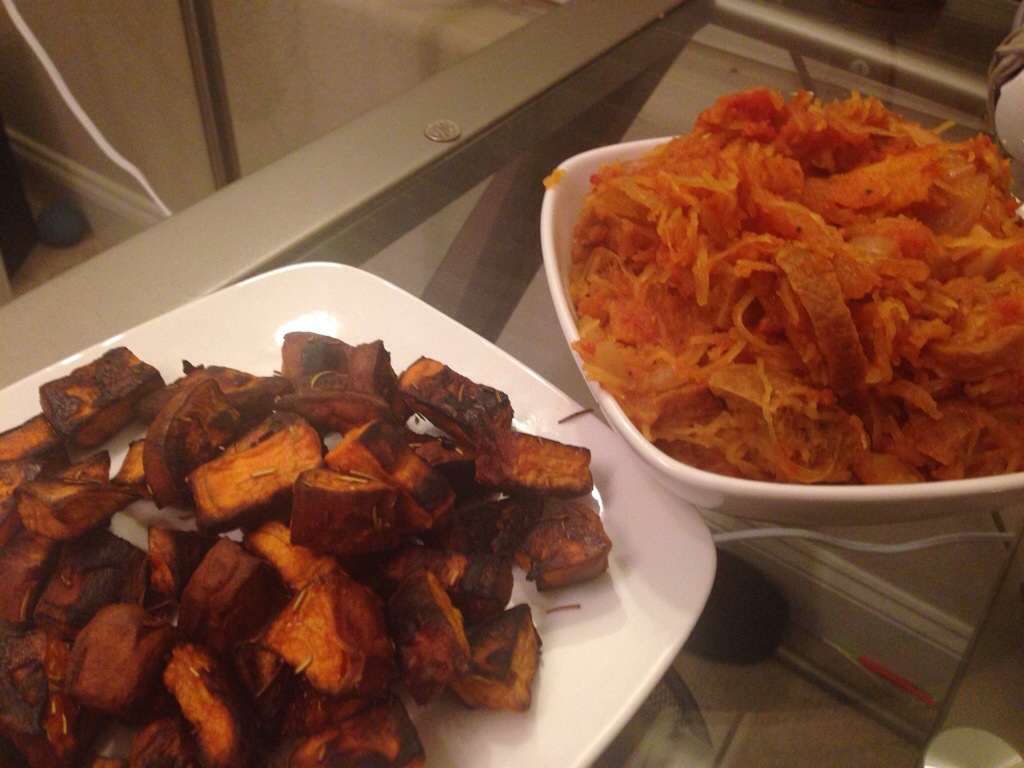 I made spaghetti squash with seitan and roasted sweet potatoes.

I decided to try something new and bake it. I made it with the pretty standard mix of wheat gluten to water and a bunch of seasonings. I initially just did the kneading by hand but I was having trouble getting it to form really well. So I did it in the food processor for 30 seconds. That probably over did it as it was they very hard to shape (note though that when you make seitan crumbles, I thinkthe key is that you don't knead it and bring it together).

Anyway, I then made three logs of different sizes and I wrapped them really tightly in aluminum foil. I baked them at 375 for 90 minutes. Two of the three exploded while in the oven. One came totally out of the foil and was extremely dried out. The second came out a little and had a crispy spot and a really tough outside but soft inside. Finally, the third also have a tough outside and soft inside but was better than those that exploded out of the foil.

I am not rushing back to make them in the oven again. Though, I do think I will use foil.I've seen other things where they steam it_in_the foil. I wonder if I could still do the pressure cooker steaming with the foil. It is worth experimenting.

Nothing special with the sauce. I sauted a whole onion. I bought whole peeled tomatoes instead of diced so I try to lightly immersion blend it. Well, I think the end result was crushed tomatoes as it was basically liquid. That was finebecause I knew how I would be mixing it all together. Anyway, I added the tomaotes then a tiny bit of olive oil, salt, pepper, garlic powder, etc. I then added some balsamic vinegar. I let it cook down until thicker

Meanwhile, I used the microwave on the squash

I recently read an article on Serious Eats called "Food Lab: How to Roast Fall and Winter Vegetables". I used their technique (and recipe below) for the sweet potatoes. Basically, you let it rest in 160°F water for an hour for the enzymes to convert the startches to sugar. (I put the whole pan in a freezer bag with a trivet). You then roast at 400 for about 50 minutes.

I followed the idea of the recipe pretty closely. I also used a bit of honey on them as they were roasting. I probably could have taken them out a tiny bit sooner, butthey were very good. They did have a lot of sweetness! I would definitely try it again. Maybe next time, I'll also have a control group