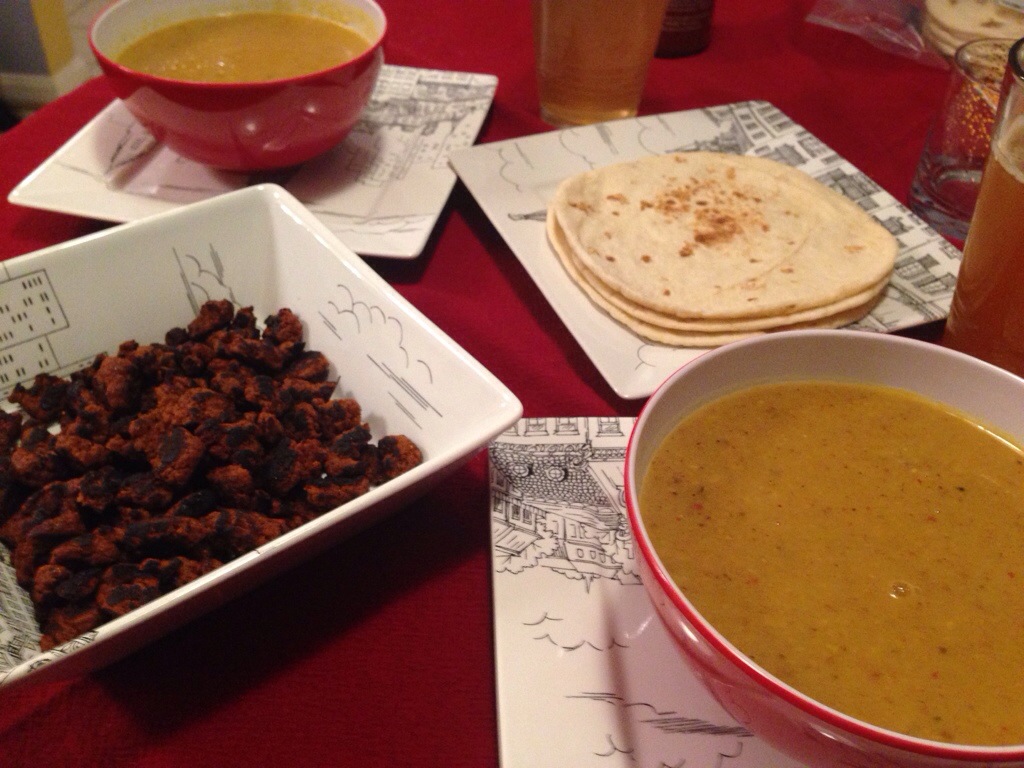 Meredith and I made a really good dinner. We had seitan chorizo and chickpea and curry soup.

First the seitan chroizo. We followed the recipe below with very few changes. They were to use smoked paprika (and more of it) and to use less chili powder (we actually also used chili rubbed powder). Other that that, we followed the recipe pretty closely. I broke up the pieces as I was adding them to the pan (stainless instead of non-stick). They did seem to burn a little bit so next time I will break it into smaller pieces before putting it in the pan.

The chorizo was incredibly good. I would absolutely do this again! It was easy and very good. Maybe I'll cook them a little bit more next time but no much. Some of the reviewers said there was too much vinegar. I could definitely taste it but I liked it. There was also a nice crisp to the cooked pieces

The soup was also based on the recipe below but we modified it more. We used a lot of cauliflower and we roasted it with curry powder first. We also added extra tumeric. We ended up adding lots of water since it was so thick and there was also a lot of cauliflower. I think we probably doubled the water. Also, we decided to skip the coconut milk altogether. Meredith ended up adding lots of seasonings. I do not recall them all so I will wait and update it with her changes.

In a medium bowl, stir together the gluten, yeast, salt, cumin, cayenne, paprika, chili, and onion.

Pour water, vinegar, ketchup, and oil on top, stir with a fork and start using your fingertips to turn into small crumbles.

Start frying the chorizo in a large non stick pan on medium-high heat, stirring constantly for 8 minutes, or until browned up.

Curried Cauliflower and Chickpea Soup (from Dishing Up The Dirt)