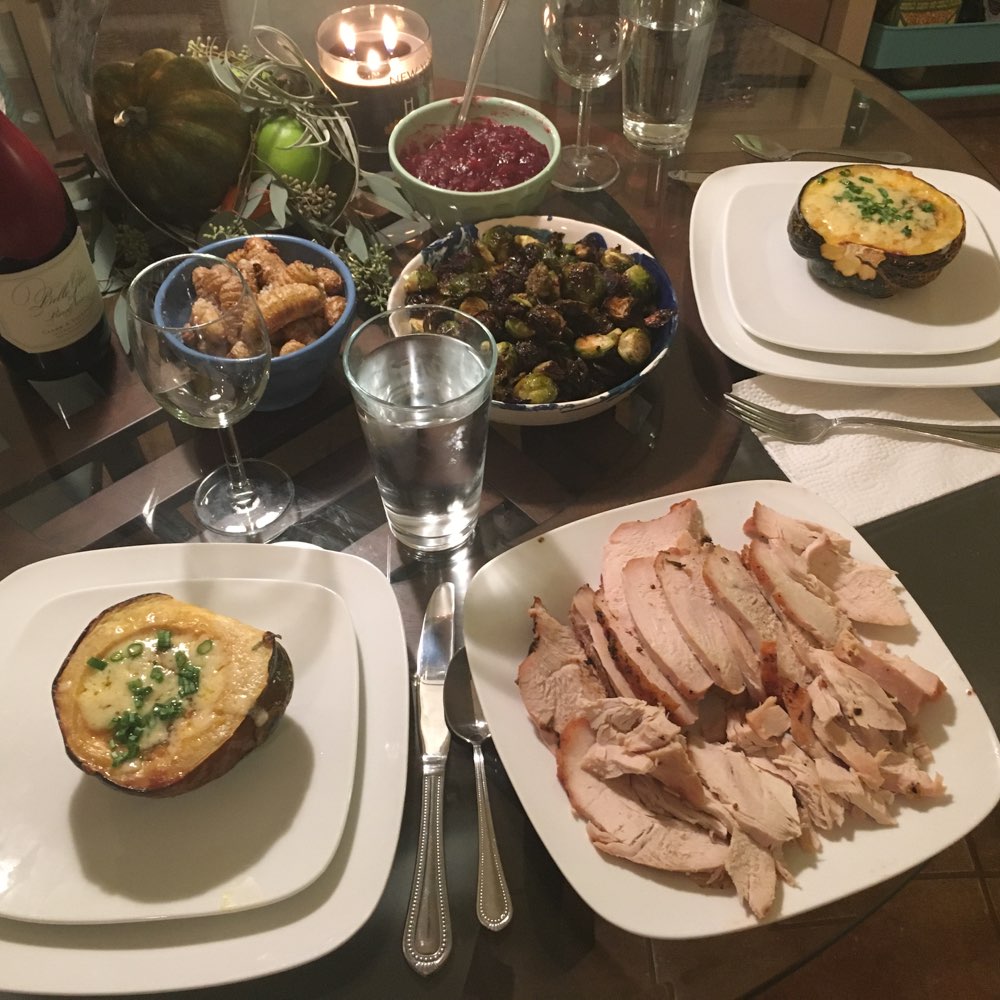 Meredith and I were in India for Thanksgiving and missed it with the family. When we got back, we heard Christmas music on the radio and my first reaction was, "it's still too early!" Then I realized that it wasn't; we just got out of sync by missing the holiday. So we made our own! 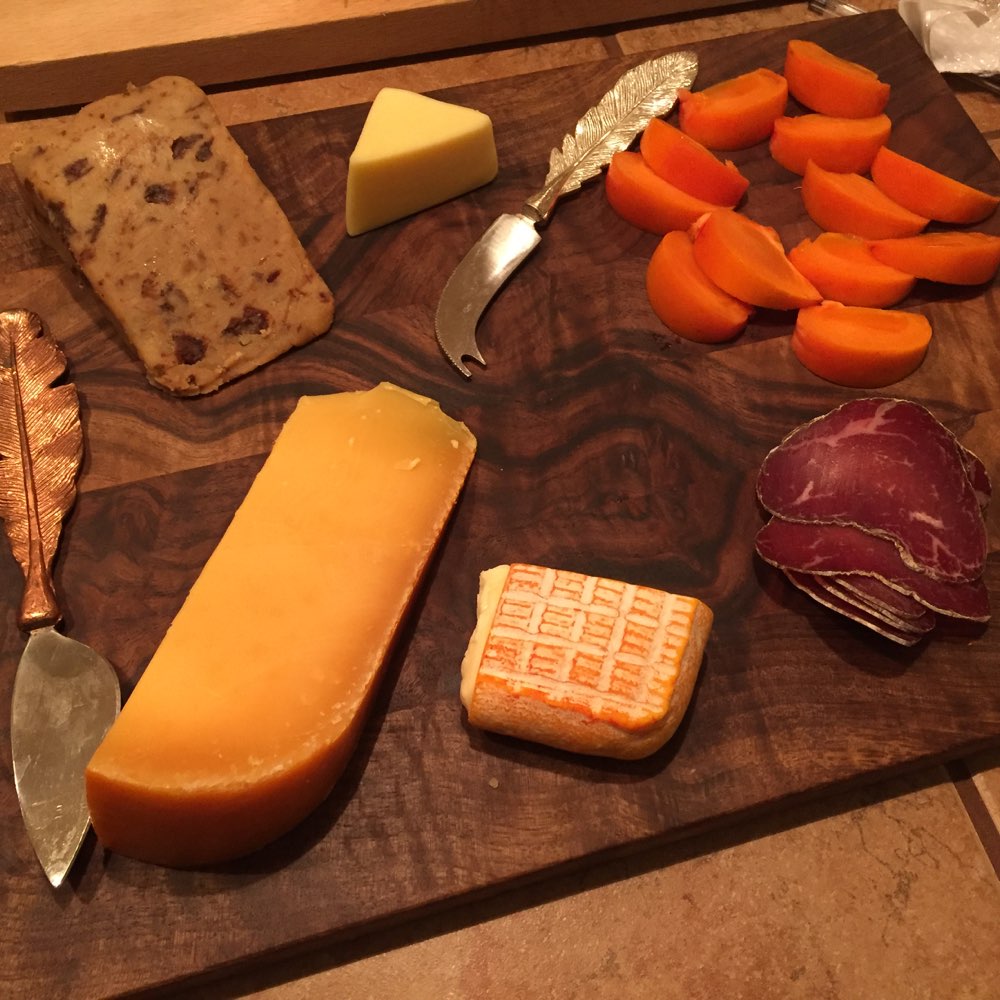 We made this first to eat and snack while cooking the rest. We had (bottom right, clockwise)

We wanted real turkey but obviously, we weren't about to make a whole turkey for the two of us. So we basically followed The Kitchn Guide (local) with a dry-brine we got from Serious Eats. We simple used the following (halved)

Unfortunately, I went way too strong. It made for a good flavor but the edges were salty. It was fine since we really don't eat the skin anyway.

We dry-brined it for about 24 hours. We then threw together a spice mixture of

We combined it all and then used the mortar and pestle to mix. I coated the breast with butter, then seasonings. 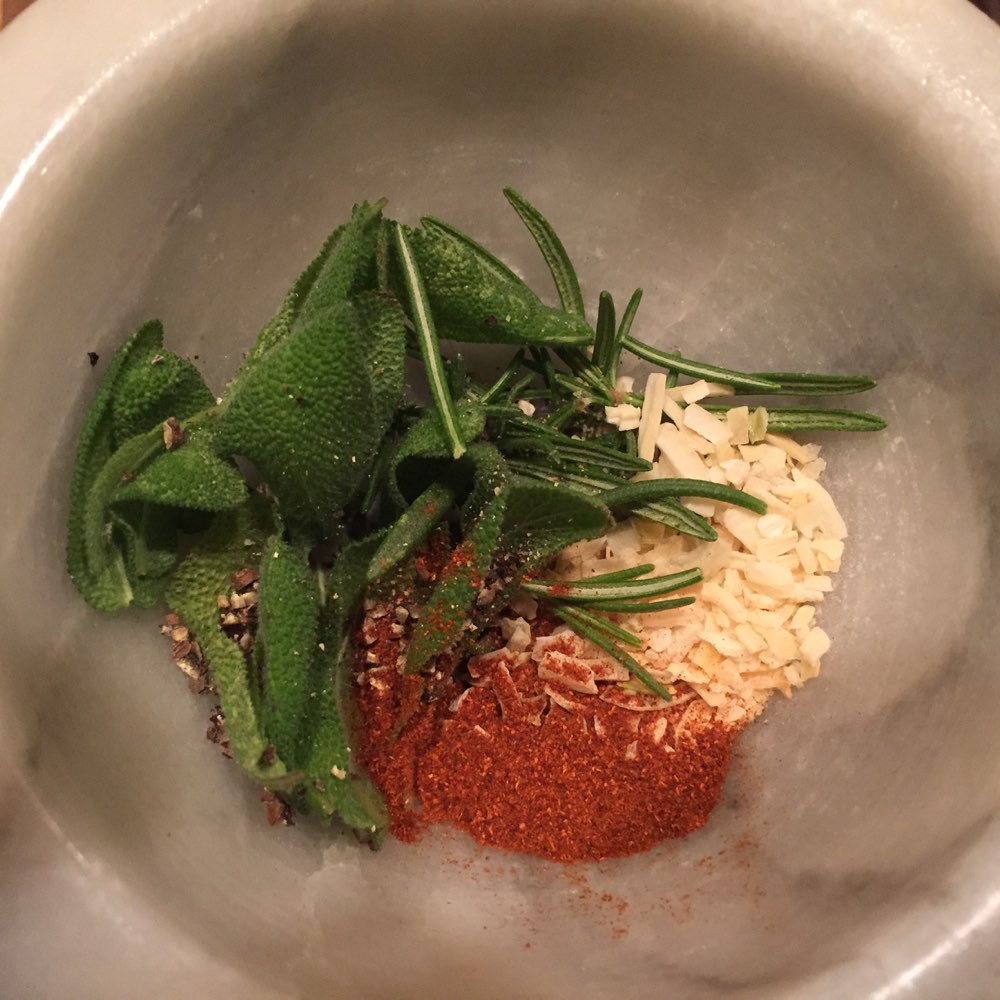 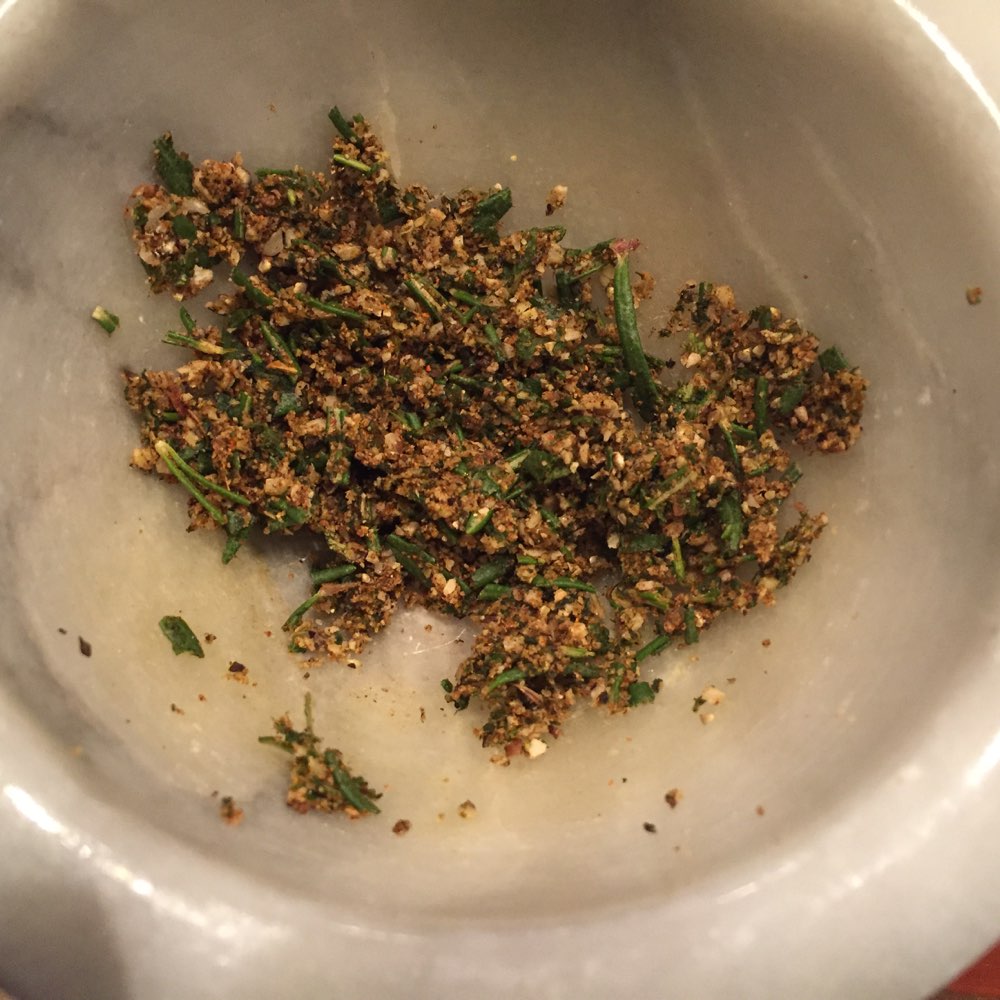 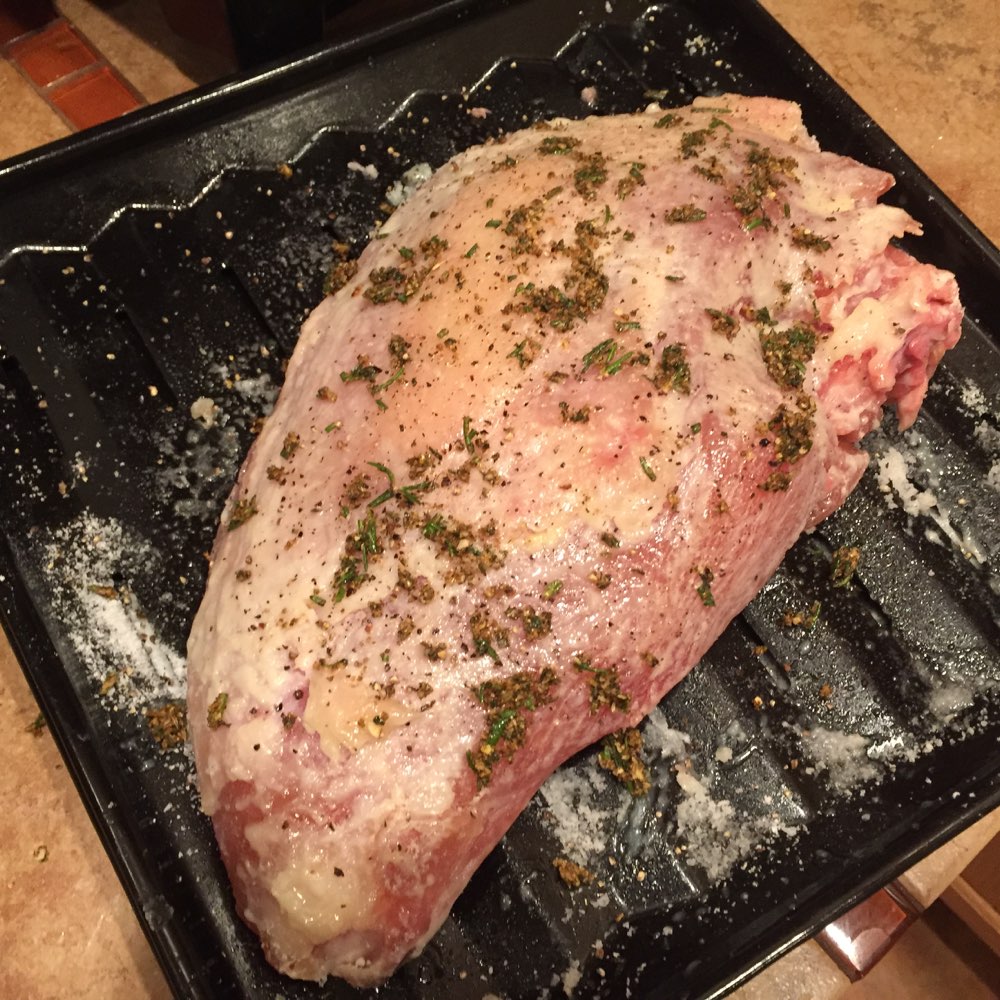 We used the small convection oven and checked the temperature at 50 minutes, 70 minuted, and then pulled it around 75-80 minutes. The final temps were too high in places and about 155 in the middle part. I know they say 165 but I knew it would keep cooking.

After taking it out of the oven, I drained the liquid from under the roasting pan and basted it with it while it rested. I was able to do a pretty good job carving. Some meat was still on the bone but I just ate it off myself (oh darn).

I liked it a lot. I thought it was very strongly turkey flavored (as opposed to salt, water, and/or seasonings) but maybe a bit dry (though most turkey is a bit dry). 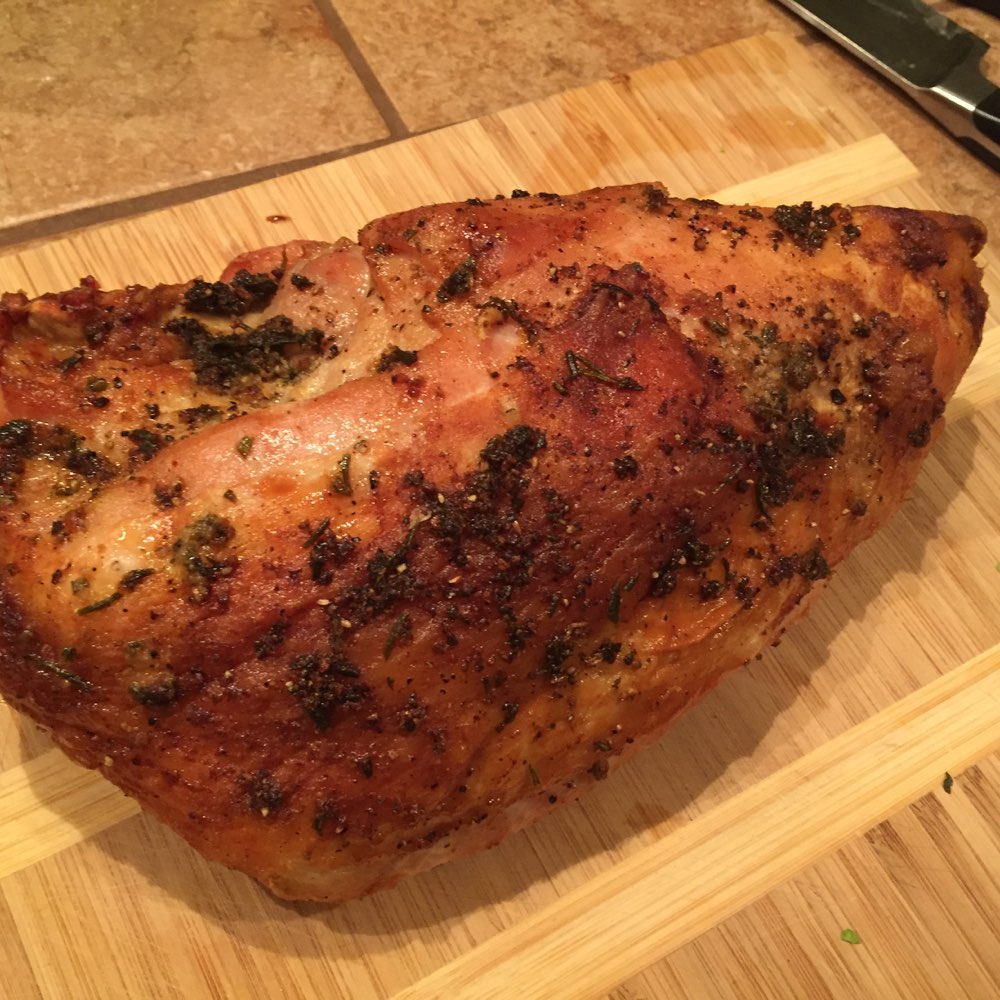 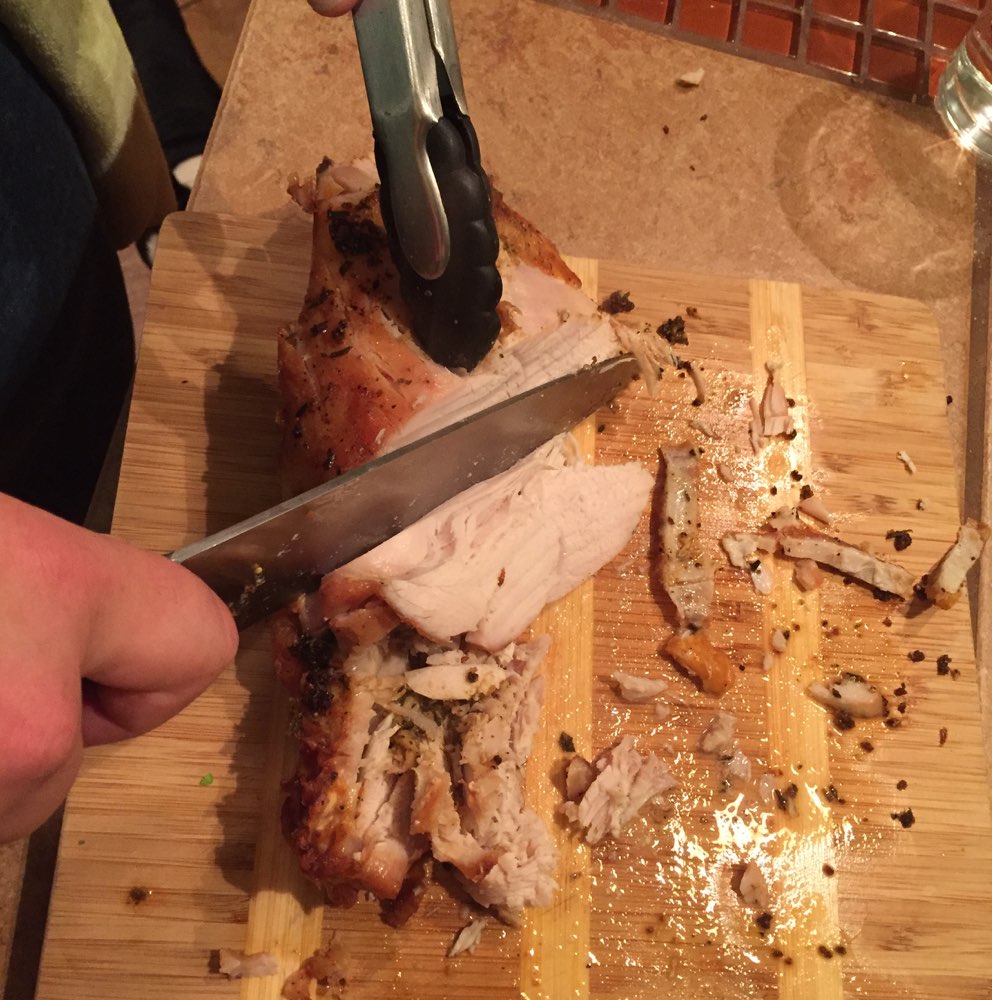 How To Cook Turkey Breast (from The Kitchn)
Local Copy (U: "guest", P: name of my dog, all lower case) 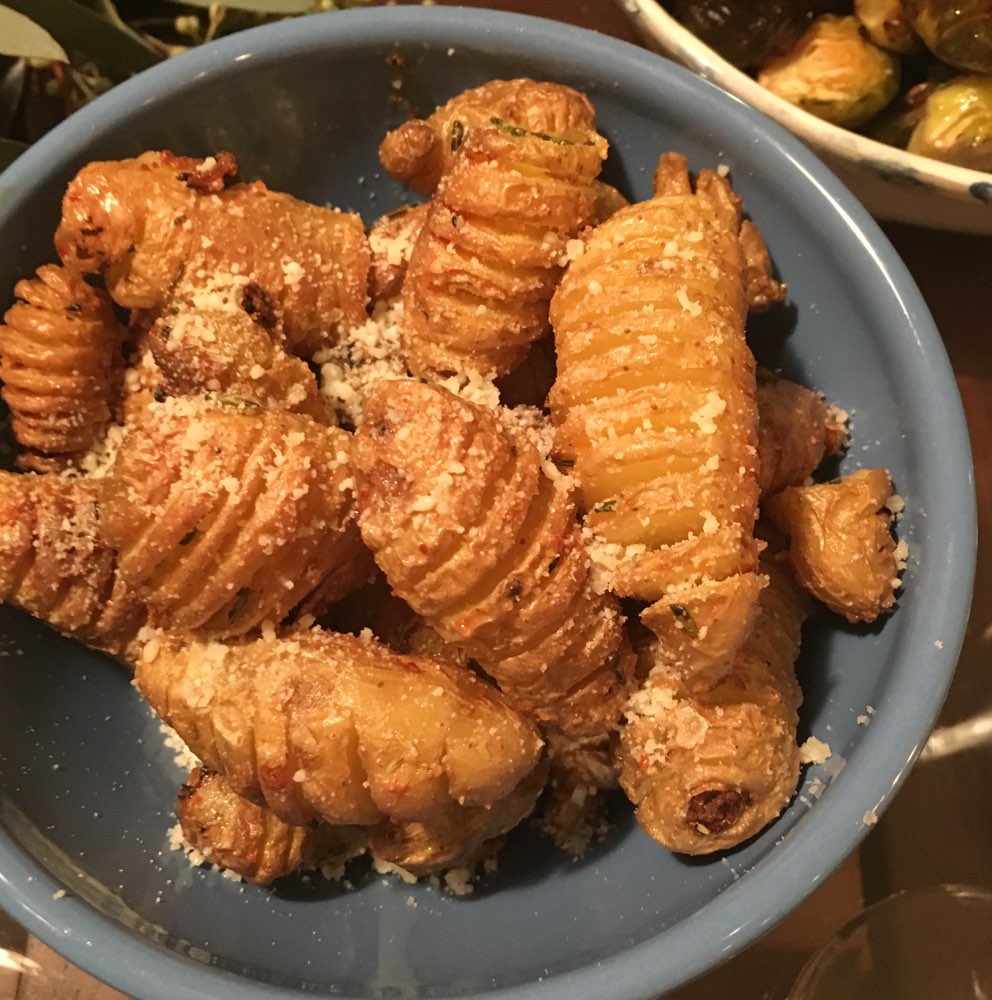 Again, we followed a Kitchn Recipe (local). We followed the recipe as inspiration but did it slightly differently.

We used fingerling potatoes and cut them with small wooden skewers as guides. We just made sure to press where we were cutting down so that the guides would work. Squeezing them did help open them.

Roasting half way, then tossing with olive oil again also worked really well. As you can see, they opened up really nicely. This is a cool trick to get the potatoes to open for you to toss.

We did our own thing with seasoning. I made some garlic oil (low heat garlic and oil for about 5 minutes) with some rosemary. We tossed it with the oil (too much oil) then added some salt and pepper. At the half way (20 minutes), we again tossed with some garlic oil (again too much probably) plus some chopped, fresh rosemary and some parmesan cheese.

At about 35 minutes (15 after tossing again), we upped the heat to 460 and ended up with about another 10-15 minutes. We then tossed them with some more parmesan cheese.

They came out really good! Crispy and flavorful. I couldn’t really taste the garlic and maybe more salt next time, but they were still one of our favorite things on the menu. 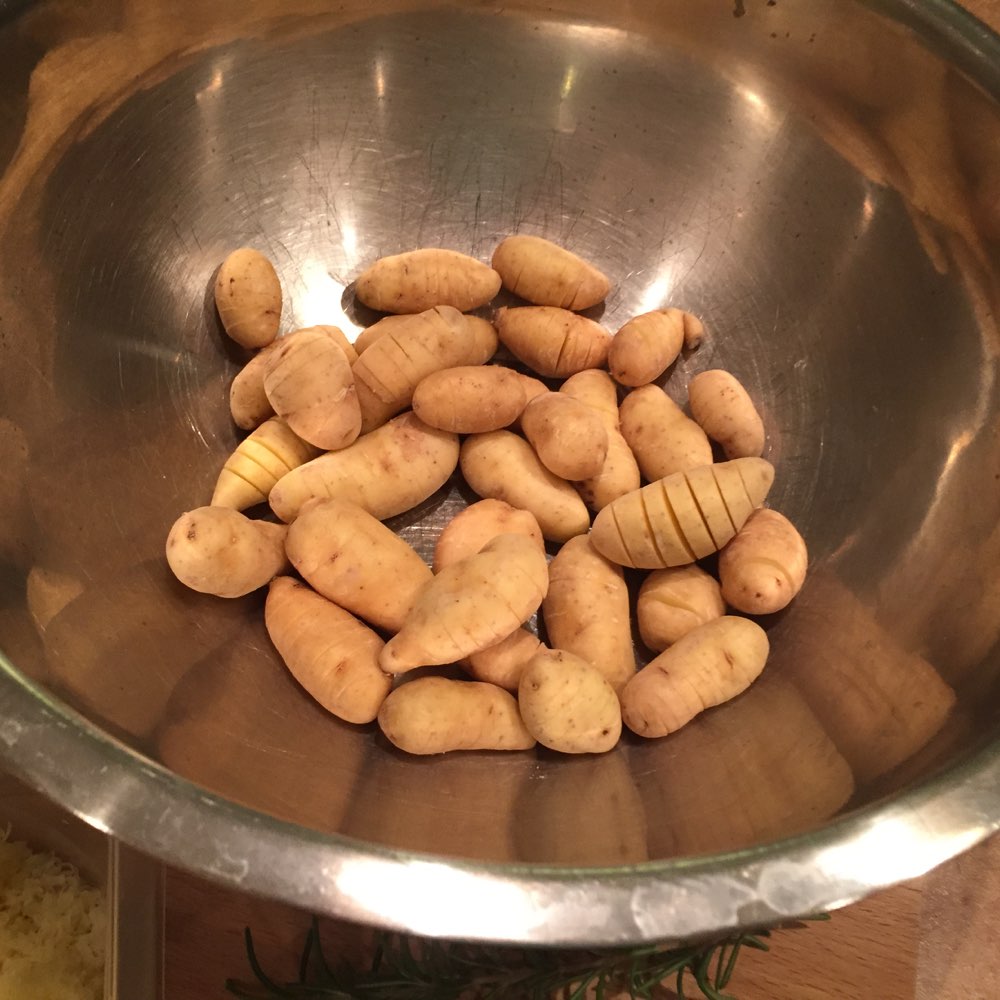 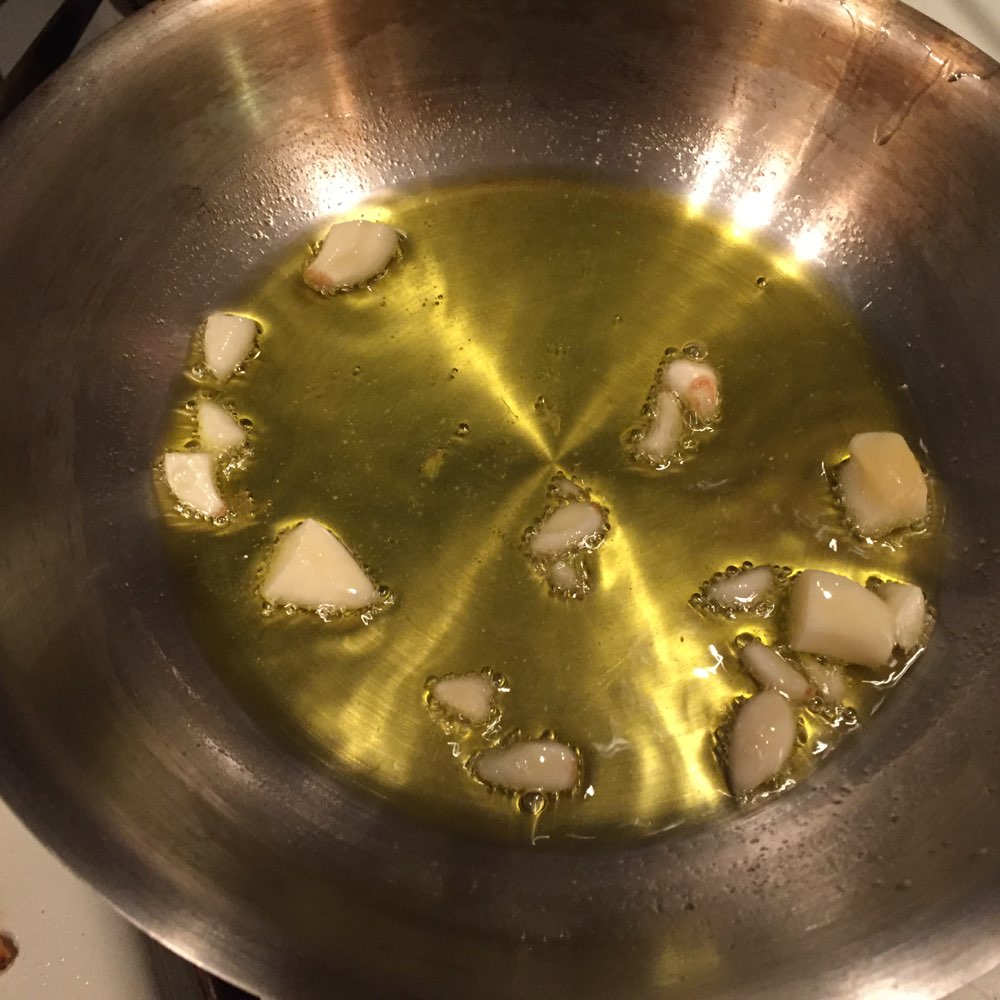 Hasselback Tater Tots (from The Kitchn)
Local Copy (U: "guest", P: name of my dog, all lower case) 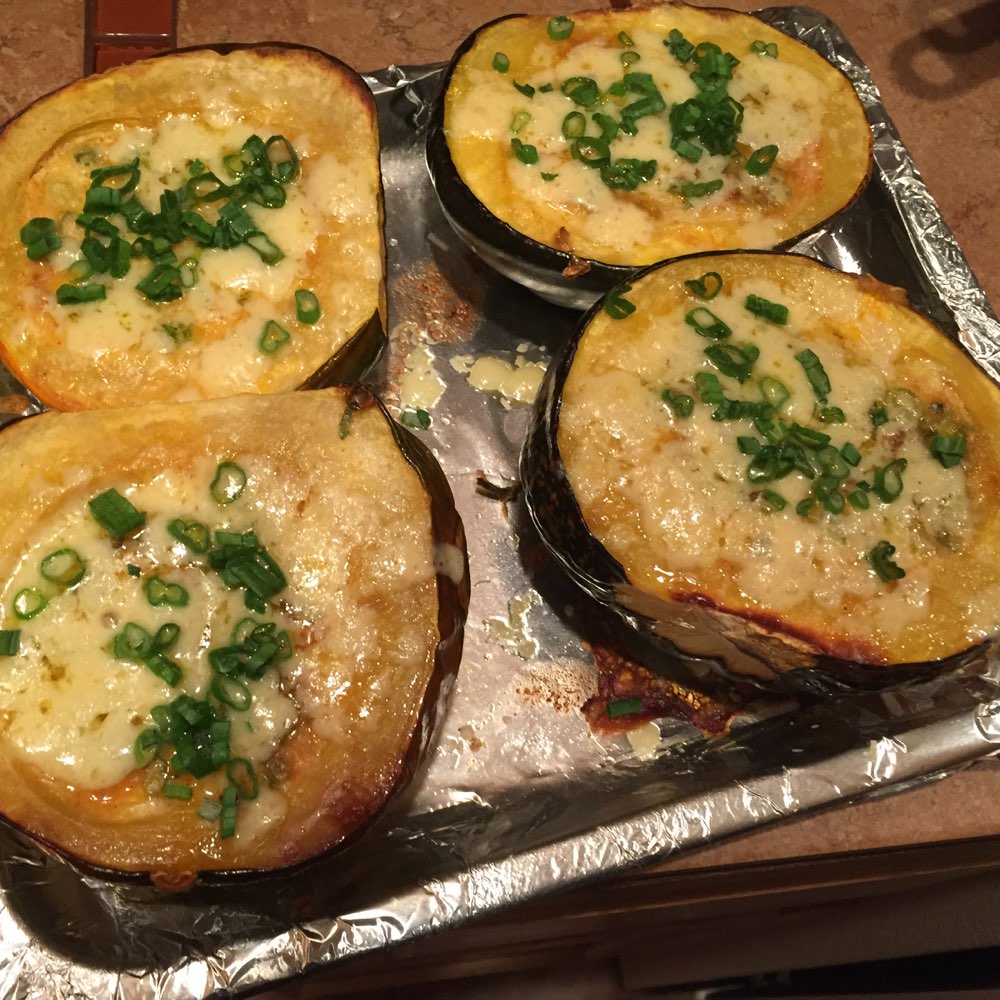 We used the recipe from 101cookbooks (local) as the main guide. We basically followed their instructions except we added some cheese to the mixture too, used almond milk, and used smoked paprika instead of anise. Adding the cheese was actually, initially, by accident. I mistakenly told Meredith that everything else goes in but I was wrong. We were able to pull out most but actually decided to keep the rest in. Oh, and we used frozen corn (and extra) and regular (non-clarified) butter.

We baked it as per their instructions, but we did this first thing so we let it cool, then reheated it and broiled it with the extra cheese.

Maybe it was the cheese in there, or it would be this way anyway, but it tasted like quiche. You also barely tasted the corn, despite going heavy on it. I wouldn't say it was bad, but not really what we were going for. Oh well. 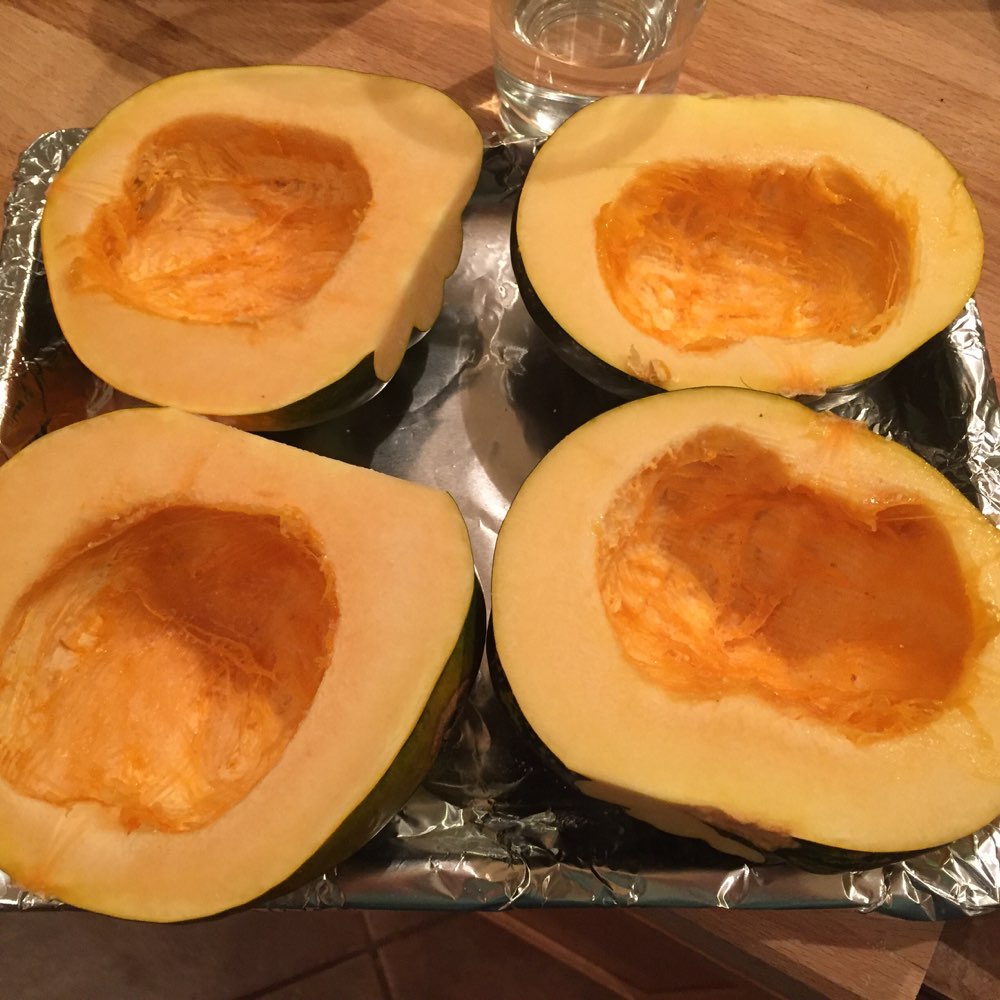 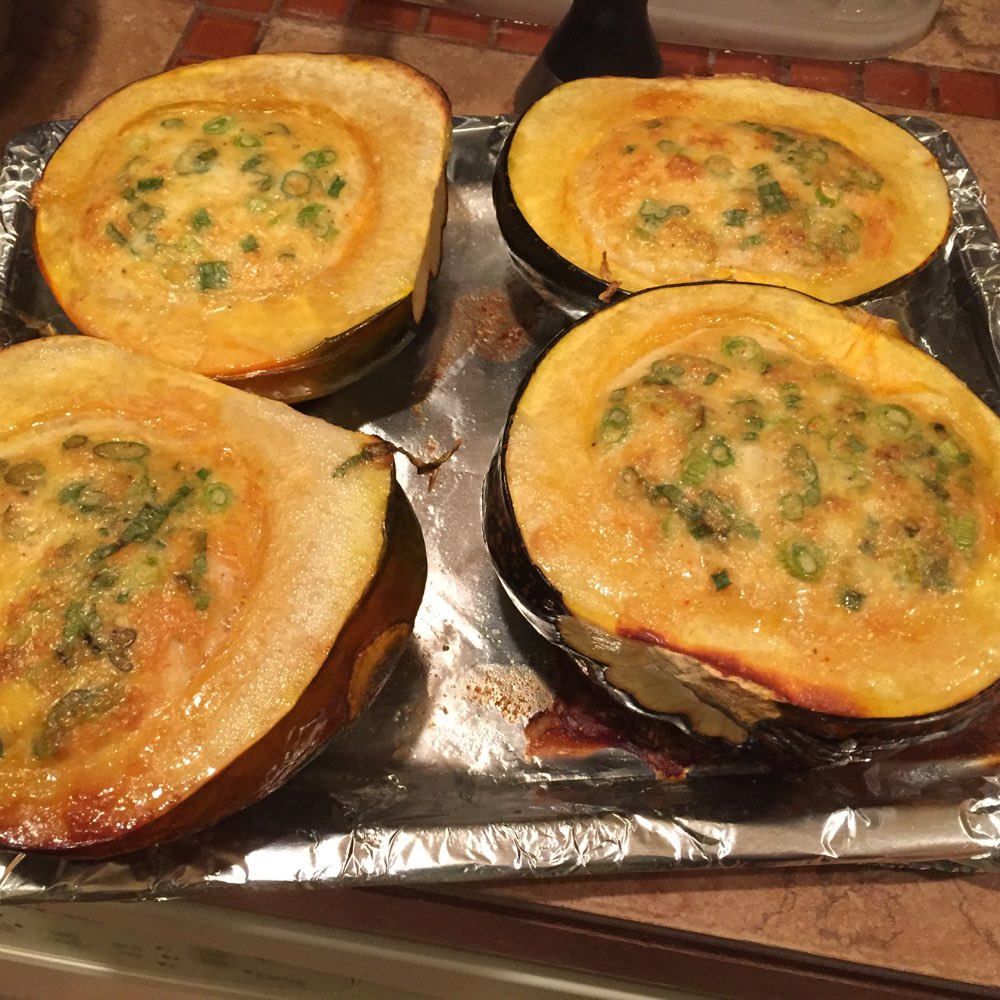 Roasted Corn Pudding in Acorn Squash (from 101CookBooks)
Local Copy (U: "guest", P: name of my dog, all lower case)

Meredith made the cranberry sauce with some inspiration from this Kitchn recipe (local), but it was really her own creation. One thing I really liked is that she used about half as much sugar as it called for making the cranberry flavor stand out more and be less cloyingly sweet.

Essentially, she just simmered it for a while, added the rum, and then let it simmer some more, just until it was the right thickness.

Very Basic Cranberry Sauce (from The Kitchn)
Local Copy (U: "guest", P: name of my dog, all lower case)

Nothing too fancy here. We halved them, tossed them with olive oil, salt, and pepper. We roasted them with the potatoes so about 425 for 20 minutes, tossed, then another 15 at 425 and then 5-10 at 460 (we took them out before the potatoes).

They were just barely not burned but I think that is about how you want them. They were good. Really, exactly as you'd expect. 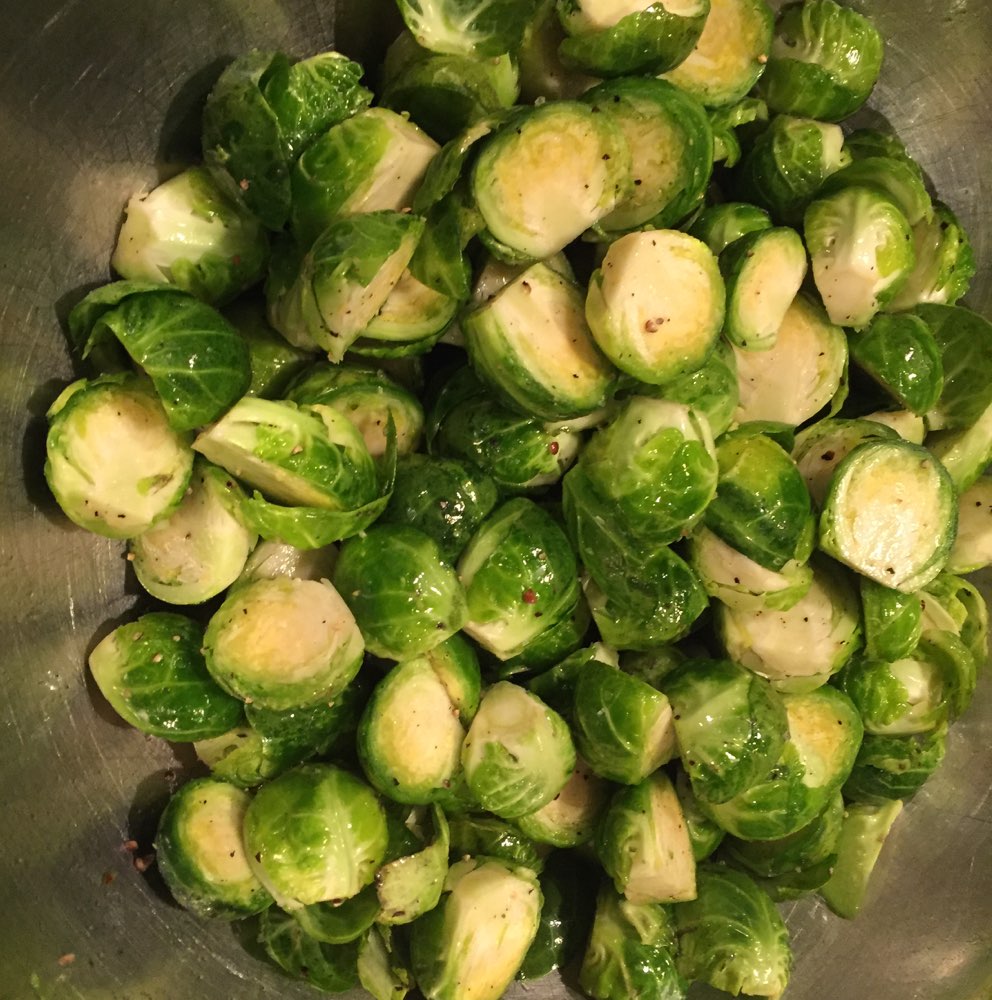 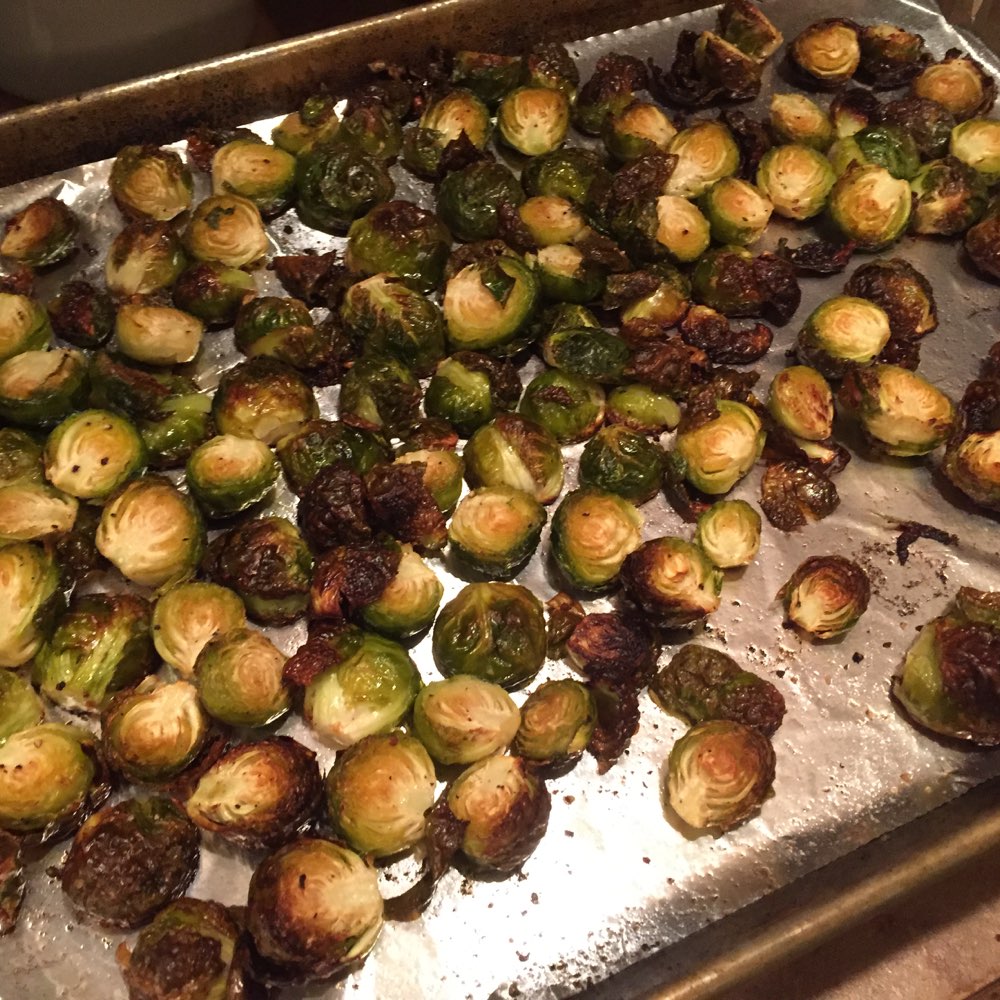 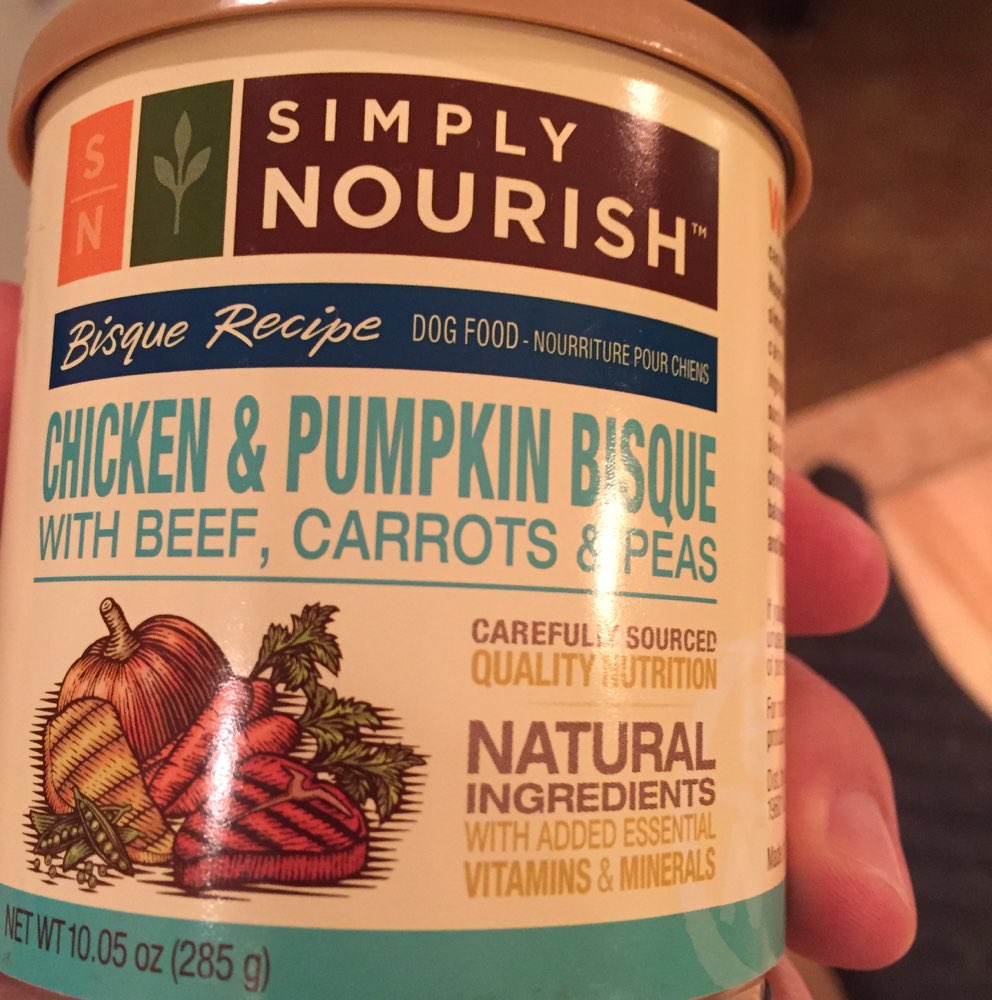