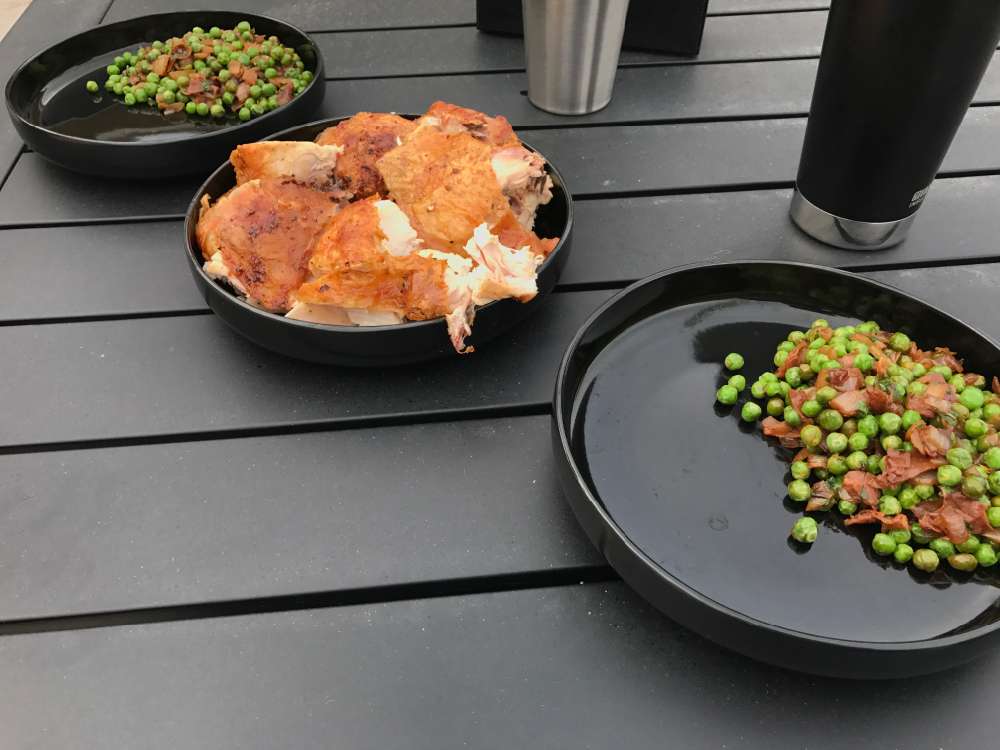 I did something of a project meal for dinner! I made a whole grilled chicken!

I followed the Serious Eats recipe (Local1) but with a 6.31 lbs chicken (Free range, organic, and on sale!). I watched some videos on how to spatchcocked it which was surprisingly easy!

I liberally spread on olive oil and seasoned it with lots of salt and pepper. Nothing else!.

I tried to also use the smoker boxes. I didn't put them under the grate since I knew I would have to flip it out later, but it should have worked. Maybe I soaked the pecan wood chips too long, or maybe they needed more heat, but I never saw it smoke and I certainly didn't taste it. I will read up on using these boxes later.

You're supposed to cook it on indirect heat for most of the time and then flip it onto the skin and cook on direct heat for the rest. However, it says at the bottom:

Butterfly your chicken, season it well, start it skin-side-up on the cooler side of a two-zone indirect fire, cook it to within 25 to 35°F of your final serving temperature, flip it skin-side-down over the hotter side of the grill, and cook until crisp and cooked through. Rest, carve, and serve.

Well, two things went wrong here. First, in the actual recipe says to go to 110°F. I was aiming for 140°Fish due to the first instruction.

Well, when I checked on it the first time, it was about 110°F but I didn't realize that was done so I let it go longer. When I check again, it was easily >160°F. Oops! I flipped it to the hot side, reduced the heat, and just did it for 10 minutes.

Actually, being that it was with the skin and bone, it was perfectly fine cooked! Juicy and fairly flavorful. There wasn't much flavor other than chicken, but that is fine for not having brined it or even really seasoned it. However, I didn't taste a single bit of smoke.

The skin was really good. Great crisp and goot bite.

I think next time I would be more adventurous with the seasonings. And maybe do some reading on those smoker boxes to get more flavor. And be more careful with the temperatures (though again, it was fine)

Also, I boiled the giblets for 15 minutes and gave them to the dogs.

Finally, Meredith made her usual Spring Peas and Prosciutto which was really good, as usual! 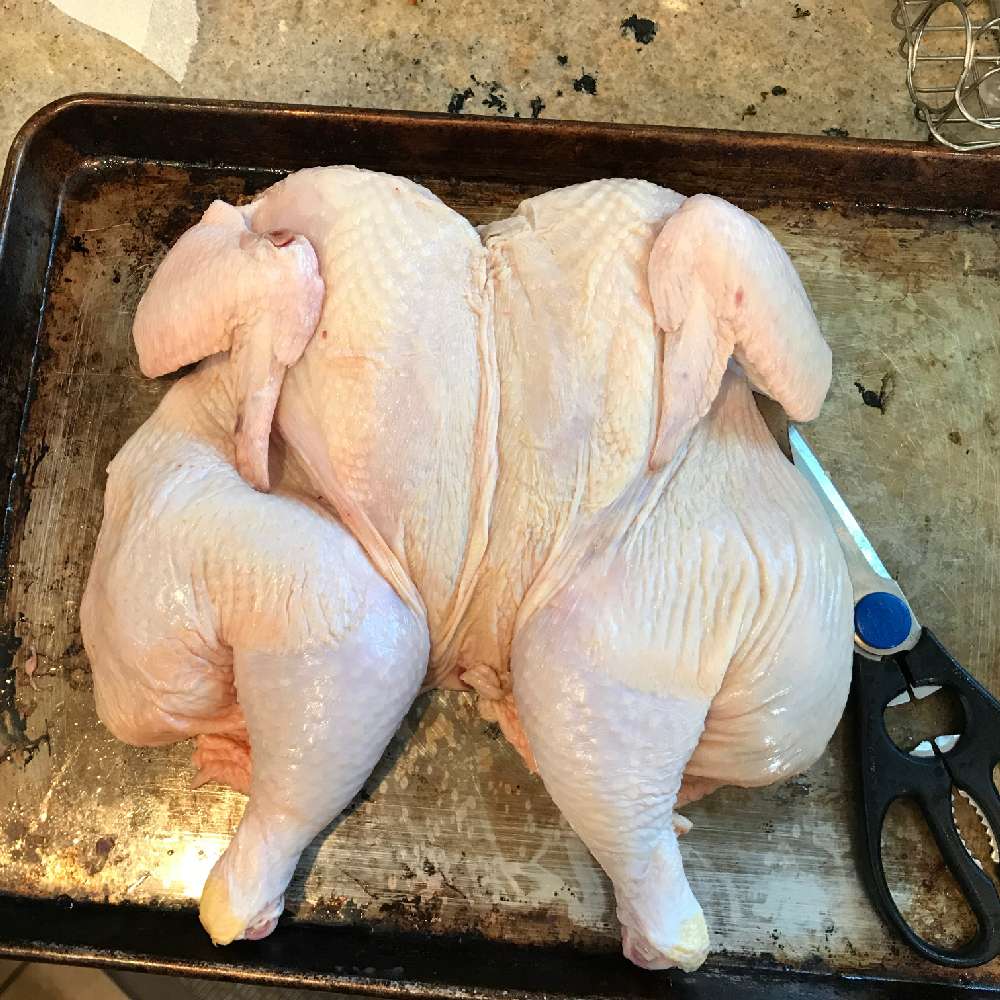 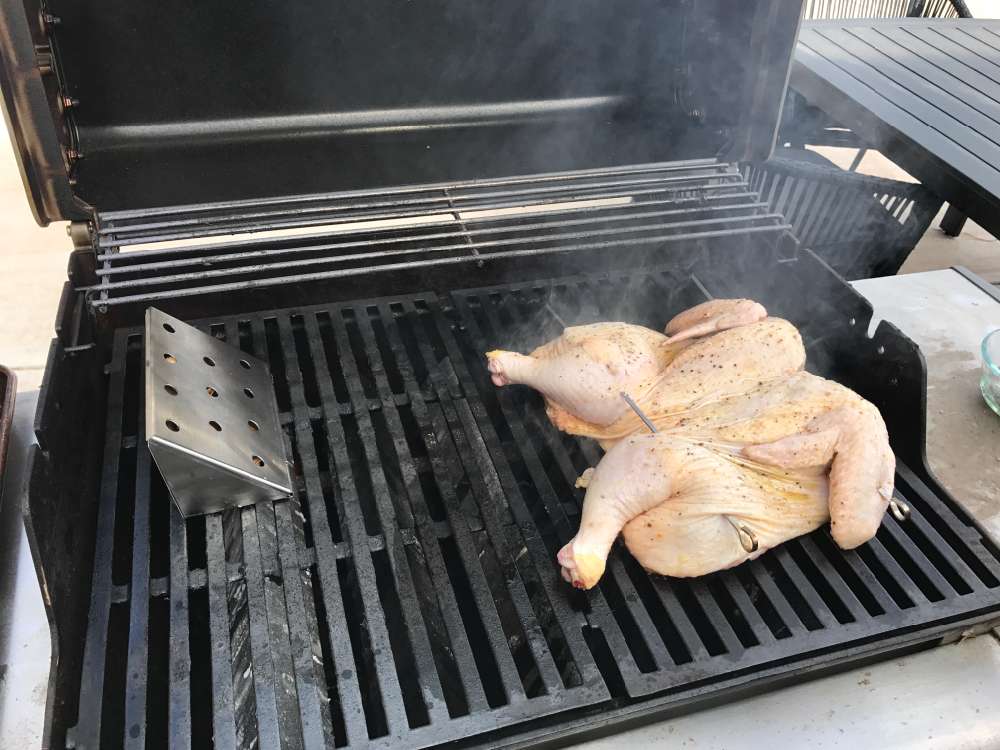 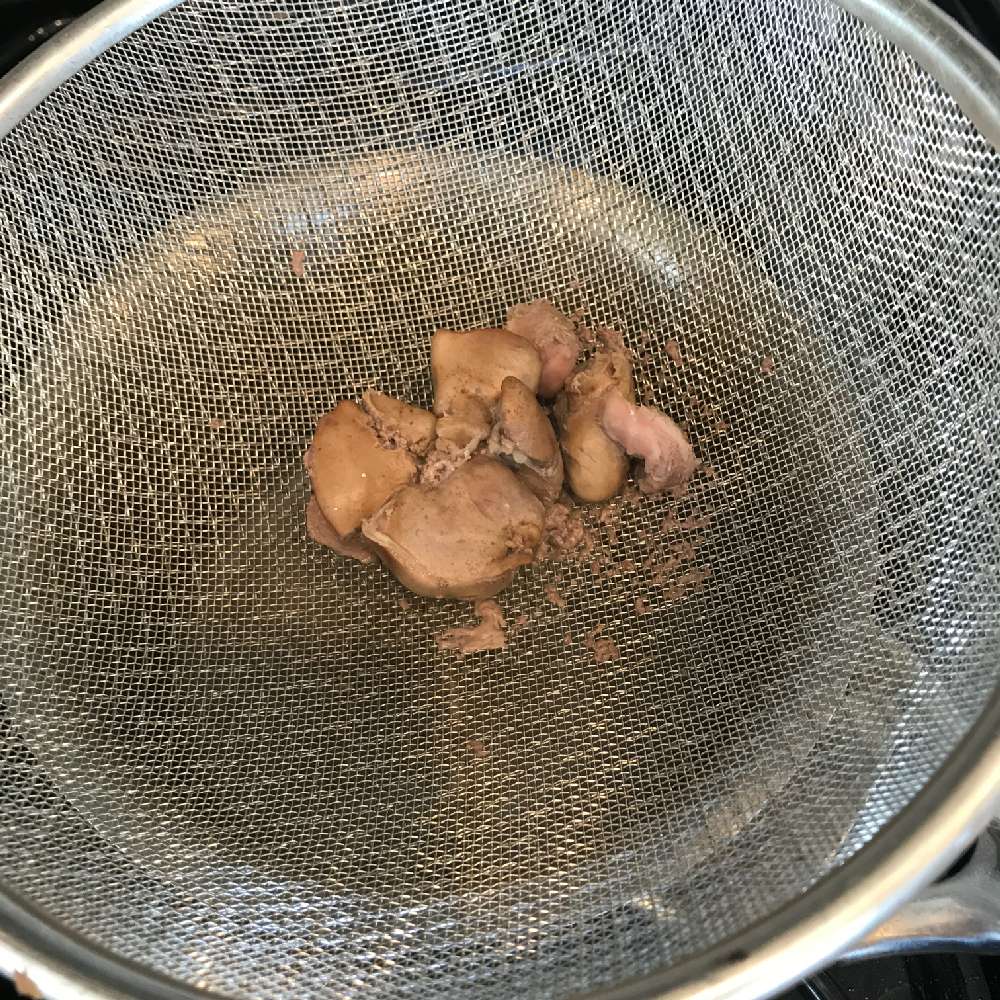 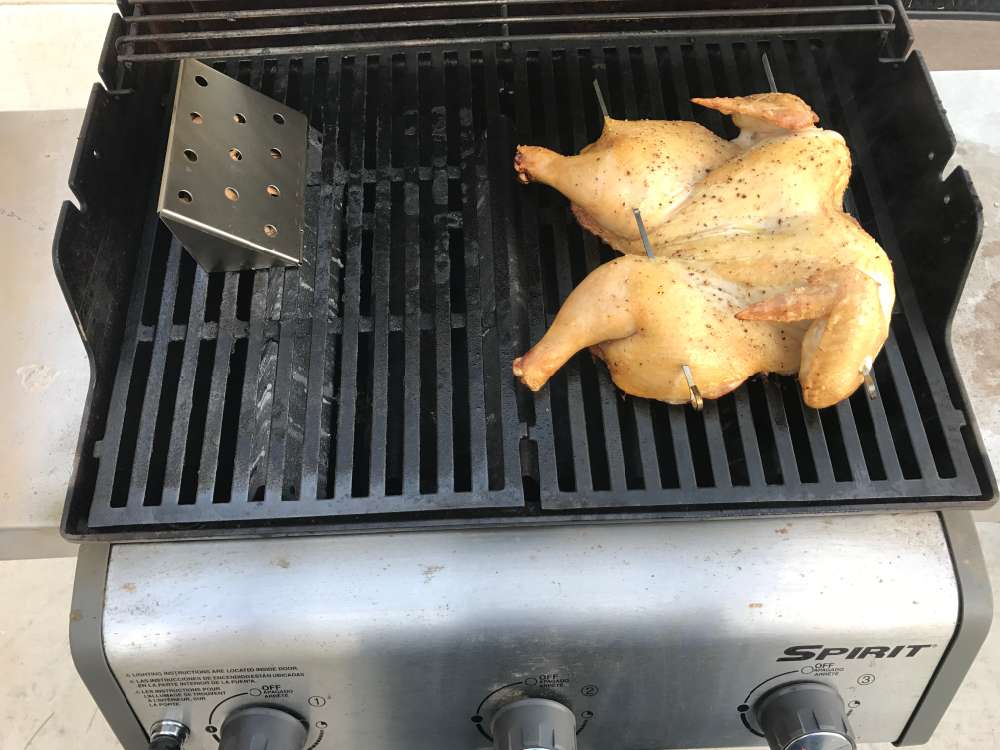 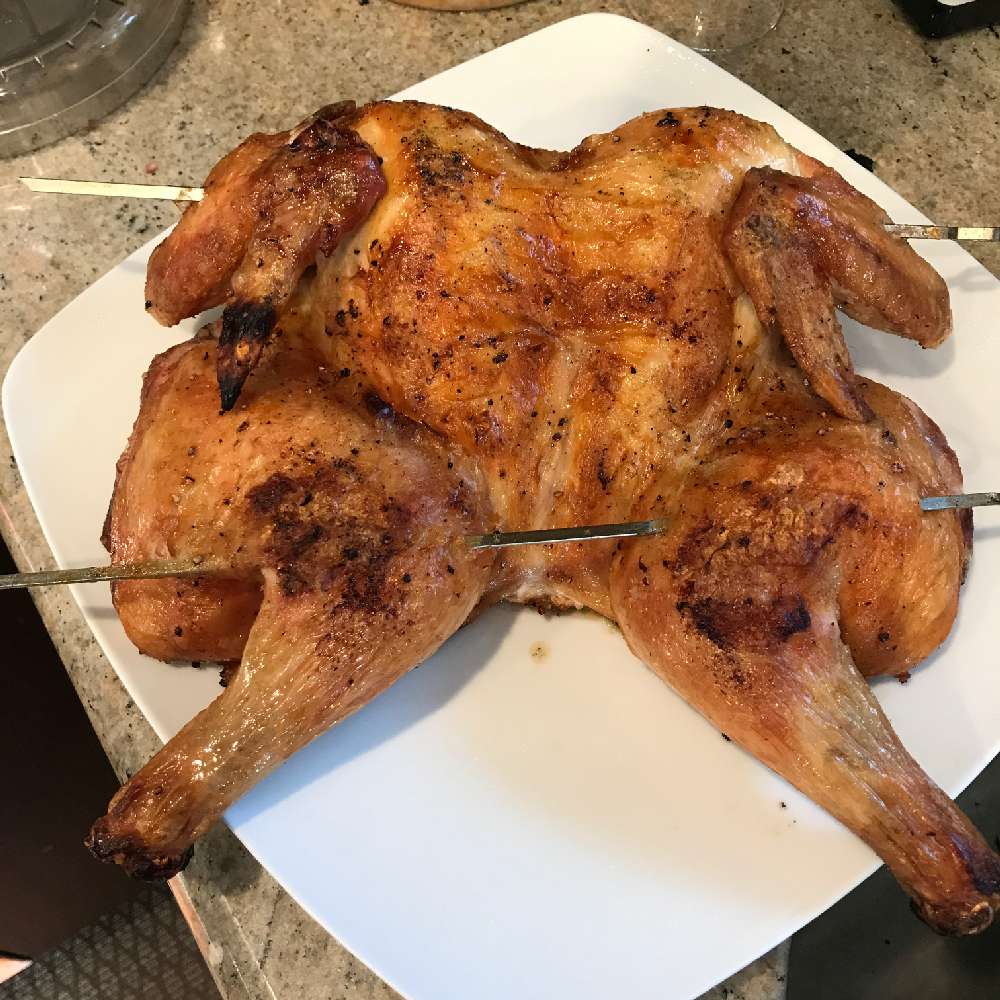 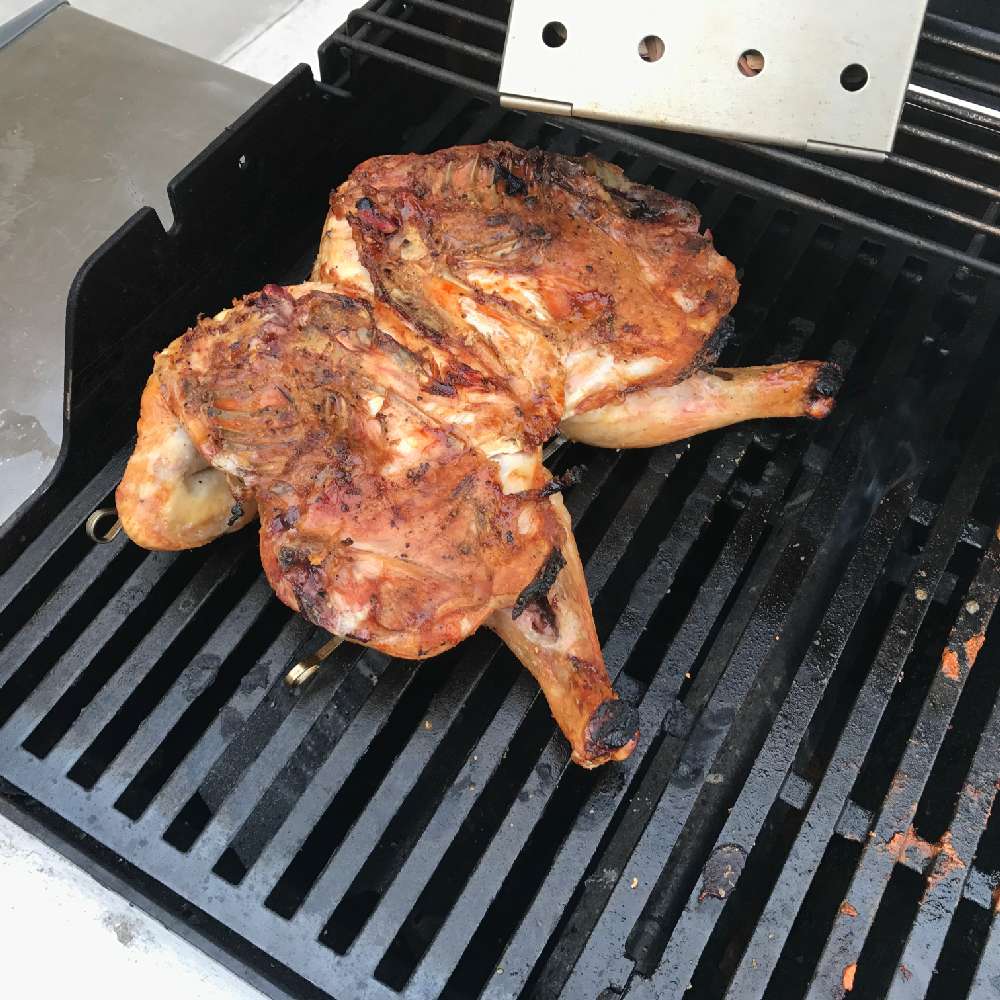