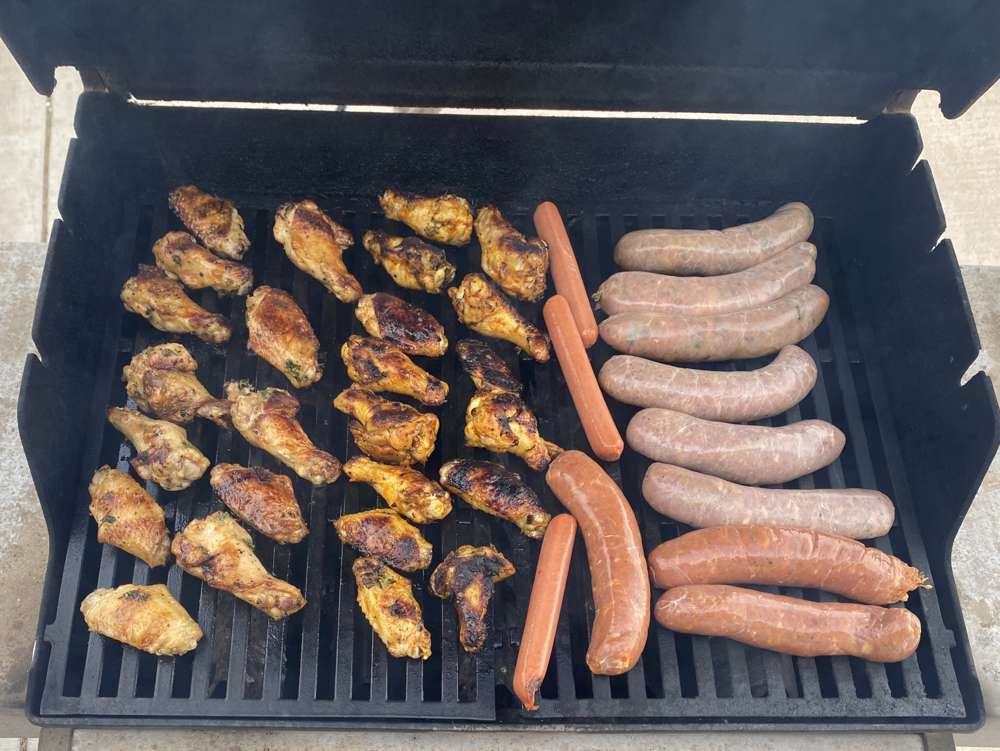 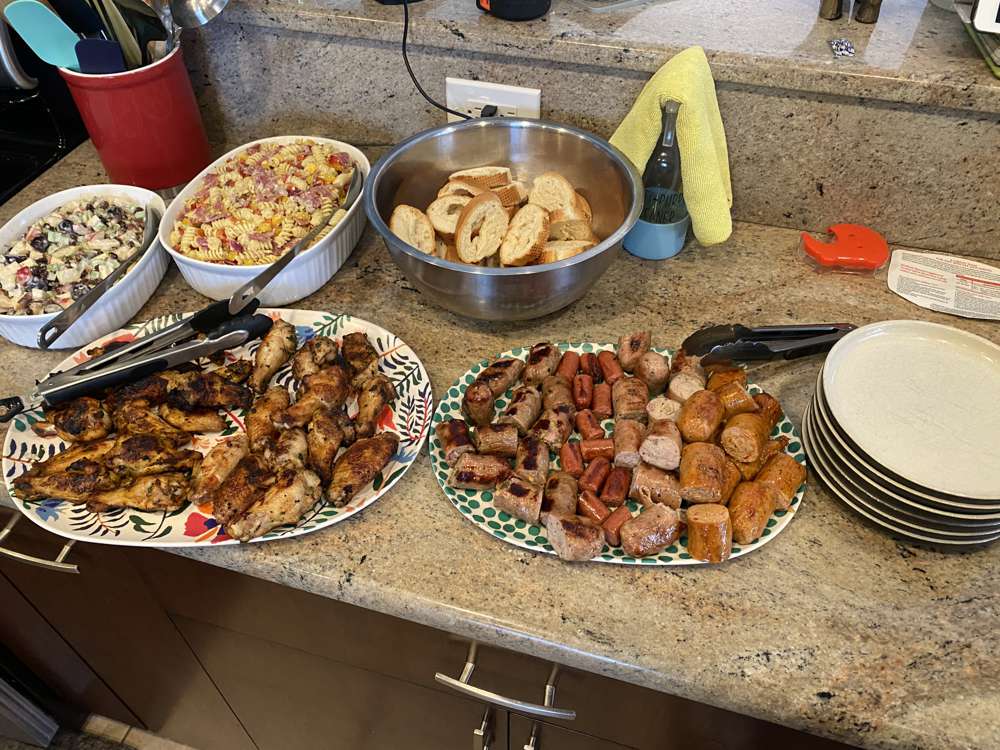 Not much "cooking" from scratch here but we had the Pettits over (and Meredith's parents) so I did a bunch of grilled meat. I bought from Sprouts some marinated Jamaican Jerk and also some black garlic wings. Plus chicken sausages. And hotdogs for Caroline. 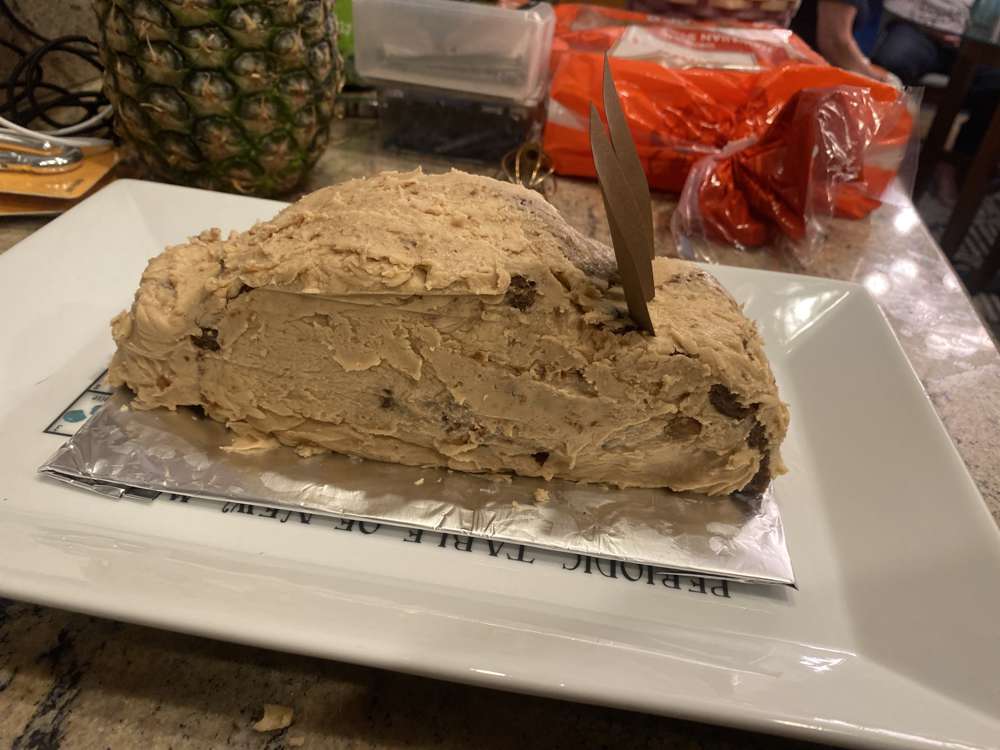 Meredith had prepped the cake part of Banana Black Walnut Cake [Sprinkle Bakes] a long time ago and froze it. Unfortunately, we learned in the meantime that I am not a huge fan of black walnut! :-(

So we finally defrosted it for Easter where Meredith did the Easter Bunny Cake [Jenny Steffens] thing.

My aforementioned feelings towards black walnut aside, it wasn't bad. I especially liked the frosting! And the black walnut also mellowed with time.

I thought the frosting was reminiscent of brown butter frosting. Meredith thought that the frosting, combined with the nuts, reminded her of pralines.

While the frosting was delicious, the frosting hardened quickly and the cake was soft. This make it really challenging to “bunny”. 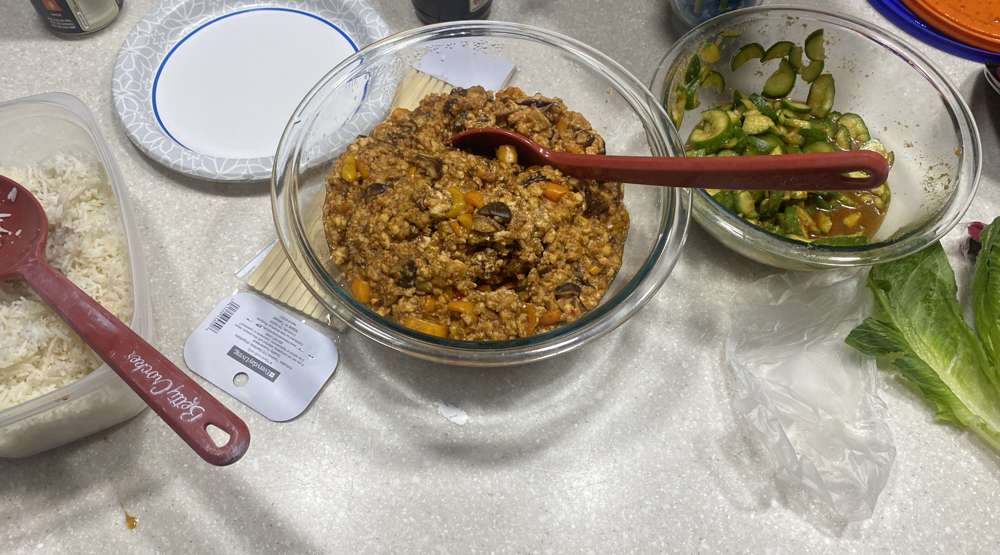 Since we liked it so much the other day, we made Crumbled-Tofu-and-Shiitake Lettuce Cups [Martha Stewart] for Tony and Kacie. Last time, we thought it was a tad too sweet so we went light on the hoisin this time and yet it was sweeter!!! 🤷‍♂️. We did not like it as much. I do not know if it was the cause but we did remember the corn starch this time.

We also made a double batch of Smacked Cucumber in Garlicky Sauce [Every Grain of Rice] but light on the oil (effectively halved). 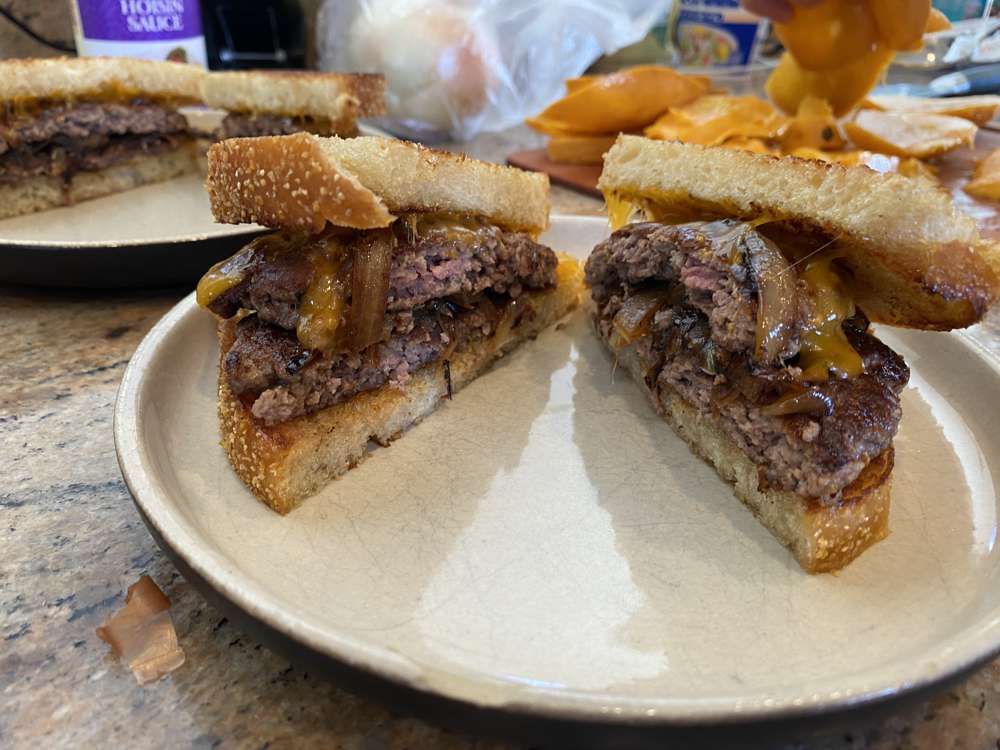 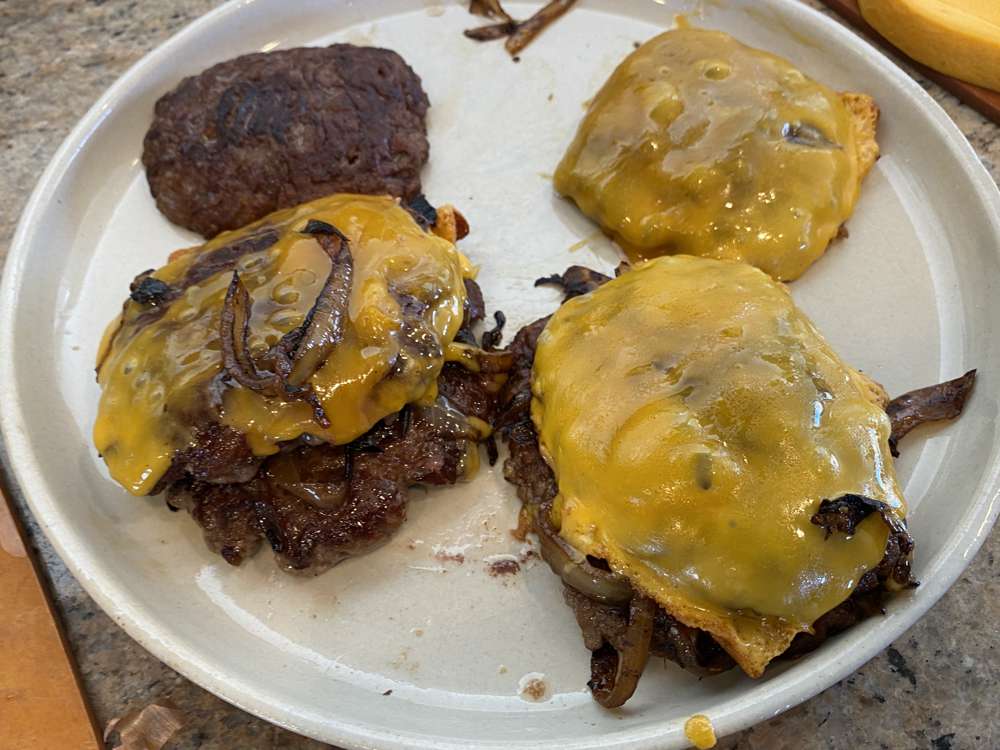 I had a patty melt at a restaurant and decided to also make them the next day. I used english muffin bread which I "griddled" (with butter, not mayo as I would have preferred) and did the 15-Minute Caramelized Onions [Serious Eats]. I then followed Smash Burgers [The Food Lab/Serious Eats]. I assembled as the onions between the patties and then (cheddar) cheese on top.

It was good but not as good as I had hoped. Not sure what I need to do next time. 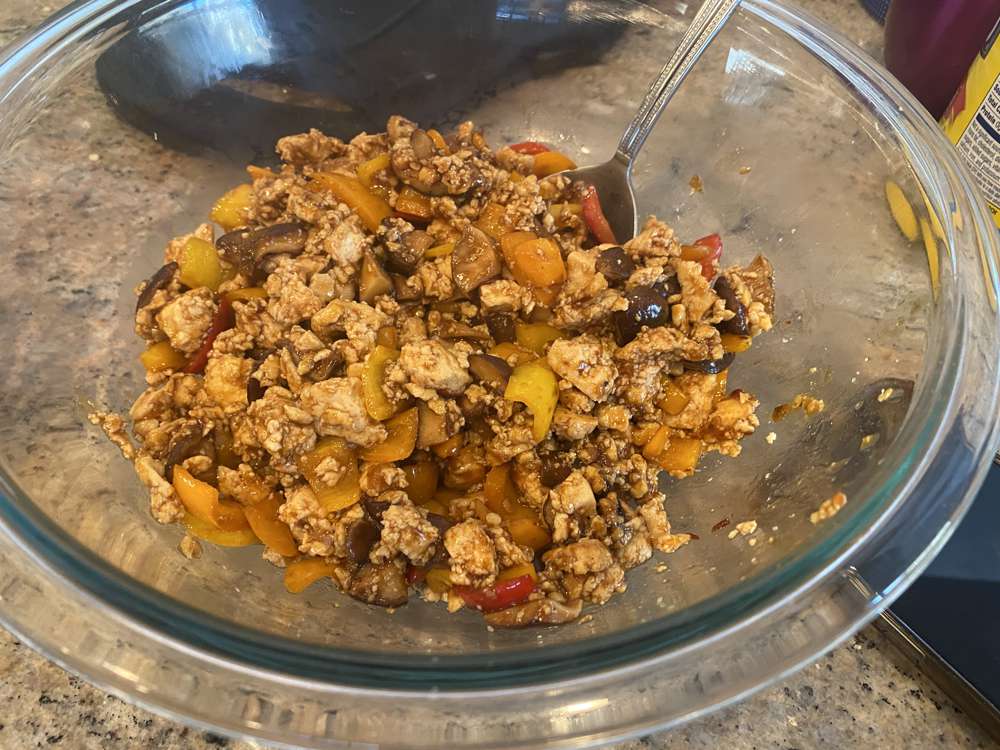 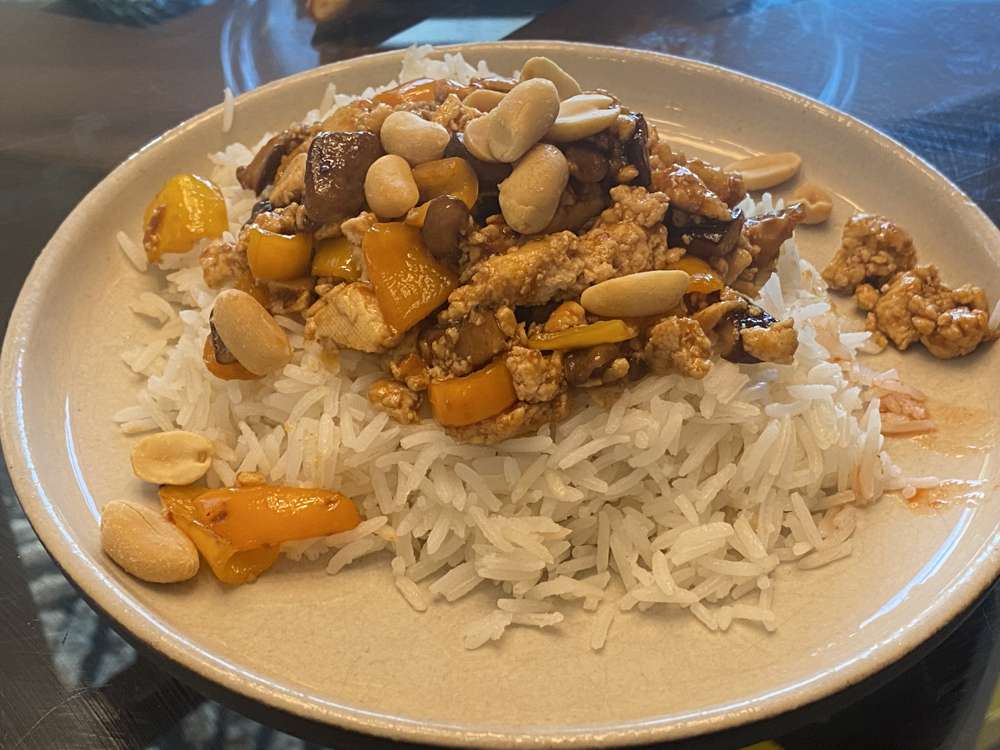 Meredith made Crumbled-Tofu-and-Shiitake Lettuce Cups [Martha Stewart] but just on rice. The only real recipe note was that she forgot the corn starch.

We really liked it. Strong hoisin flavor but not in a bad way. 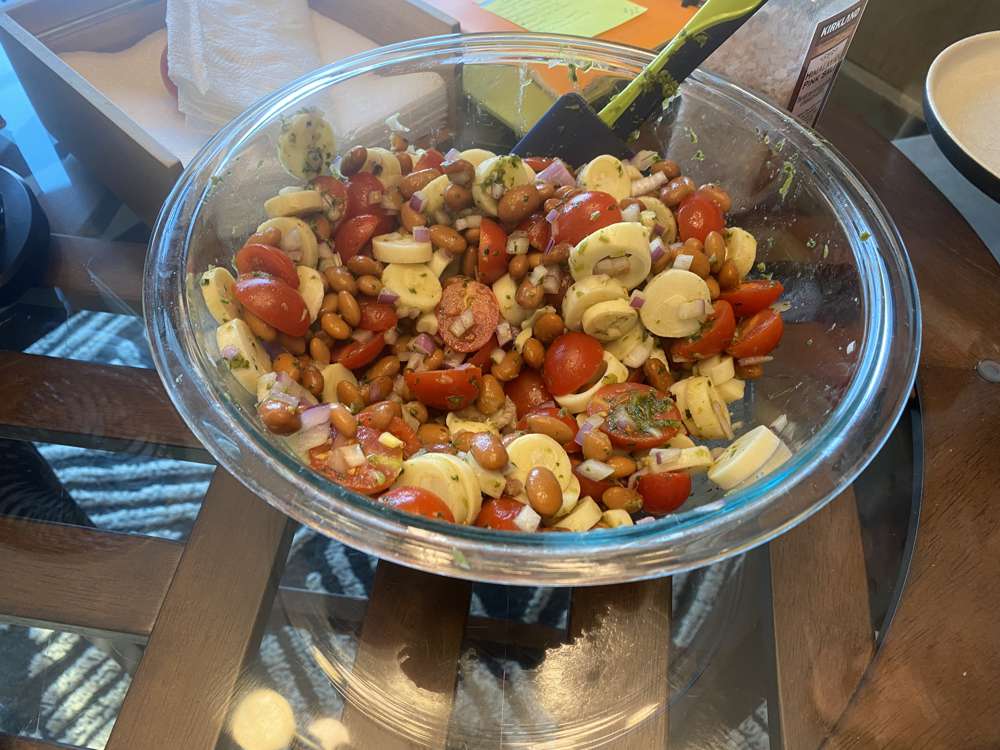 Vegan Ceviche [Karla's Closet] with Cilantro Chili Dip (or Sauce) (green sauce) instead of the cilantro and pepper. Very good as usual though I think I prefer it the original way. 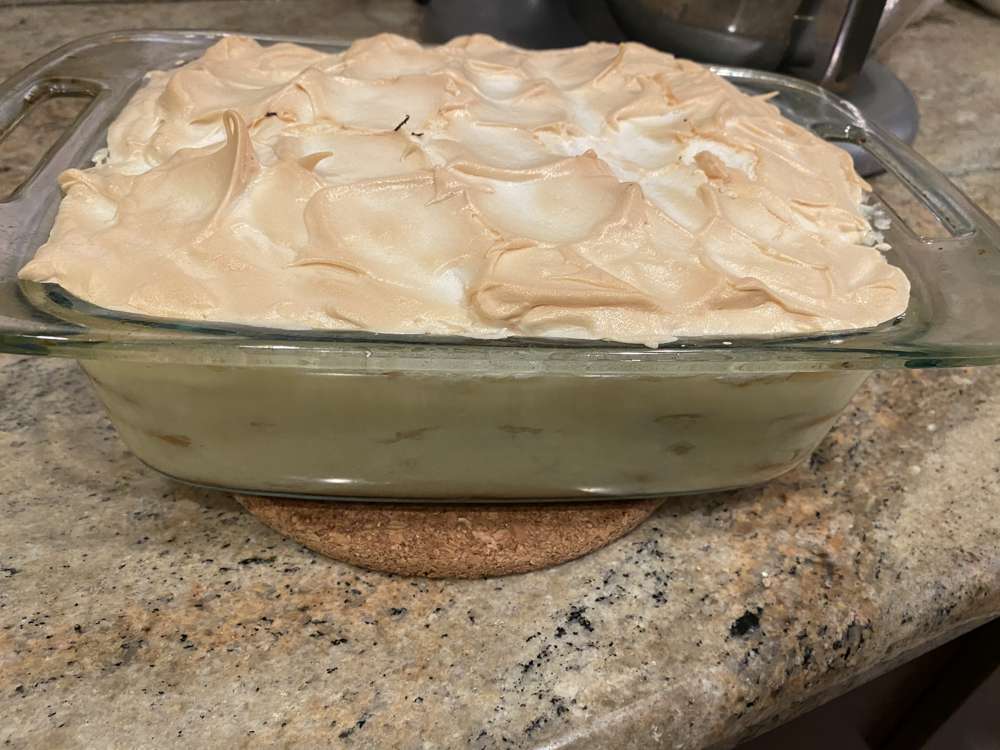 Meredith made Southern Banana Pudding. It was very good though we should have cooked the pudding a bit longer to thicken it. Also, it rose a bit into the above oven rack. Oops! 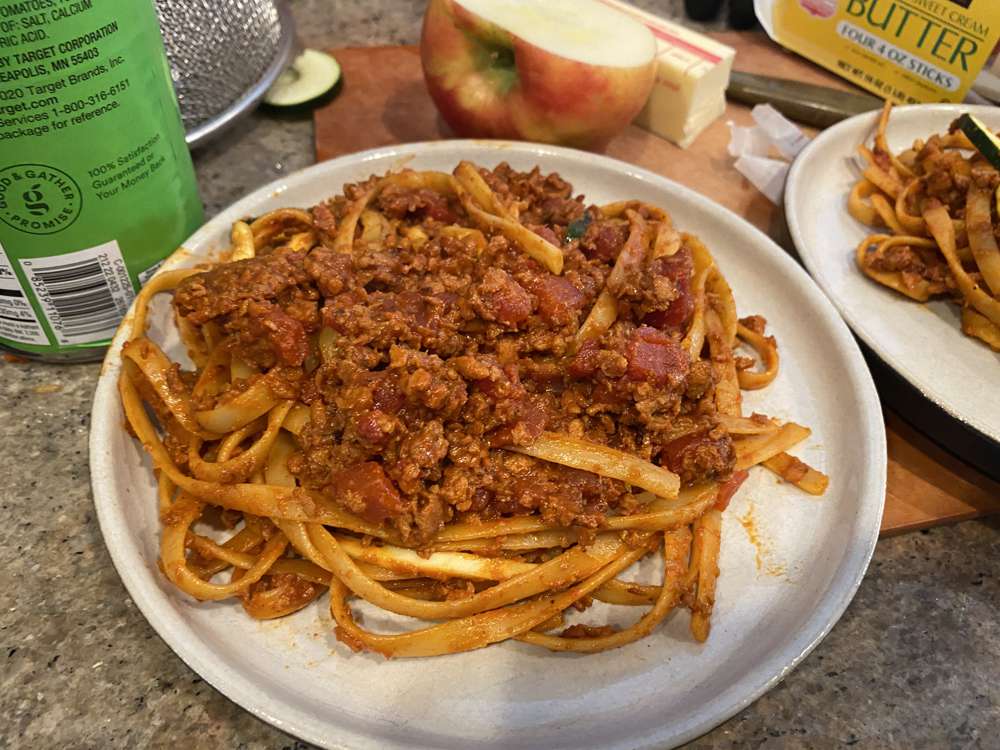 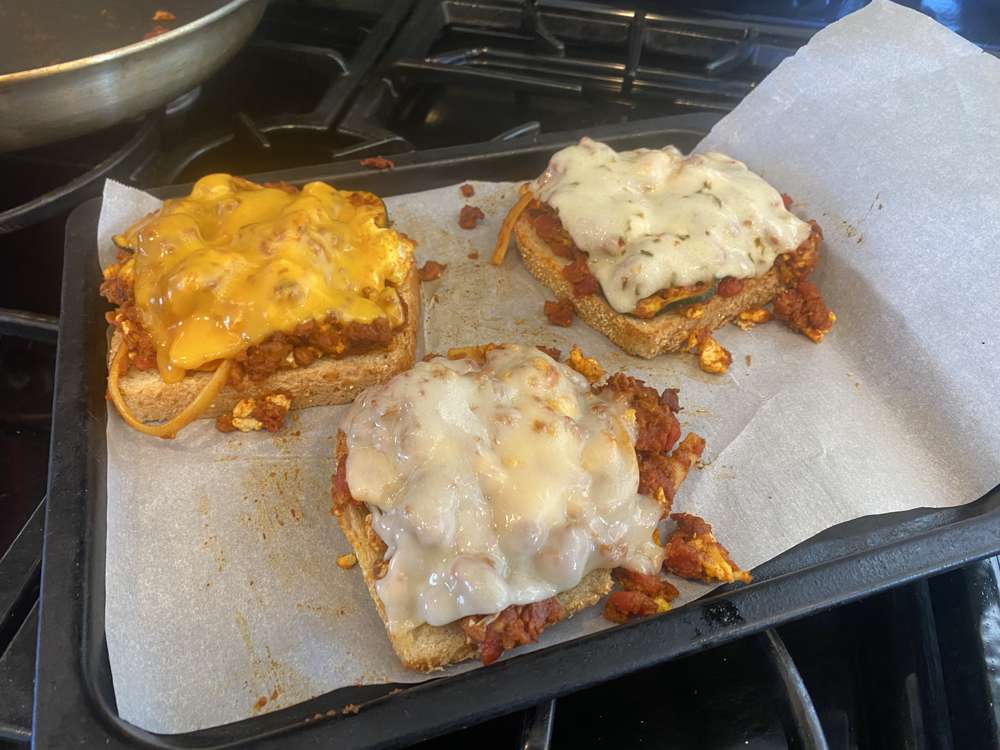 We made Soy Chorizo Ragu w/ Zucchini Noodles but (a) one of the zucchinis had gone bad and (b) I forgot to save some water to help mix it. It was good but the noodles didn't mix well with soy chorizo.

So we had lots of leftover soy chorizo and not much noodle (or zucchini). For lunch the next day, I added two scrambled eggs and made them into sandwiches.