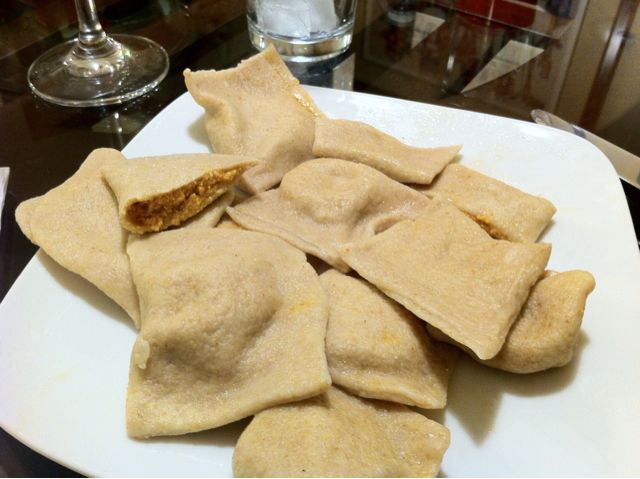 This was Emily's idea and it worked pretty well. We made the same pasta recipe as last time but we cut it in 1/3. Also for some reason, it did not need any more water. I used 1/3 cup egg whites for the 1/3 of 4 eggs and it seemed to be enough liquid. Odd that this time was fine but it worked.

The filling was somewhat haphazard. Emily and I read a bunch of recipies and just set out to do it. We mixed mostly pumpkin with skim ricotta and then added some nutmeg, cinnomen, pumpkin pie spice and splenda. The filling was good but it tasted a bit like pumpkin pie. I think next time, I will look for a more savory pumpkin filling. I think it came out to what we were aiming for but I want to try it differently.

Overall, it was pretty successful and not really too hard. Last time Meredith and I made pasta, we halved the recipe and had more than enough noodles. Since we were stuffing them, we made less pasta. I felt like it made a lot less but it was enough.

When assembling, we folded it over making it a bit more like a dumpling with pasta but it was easier to assemble because the pasta sheets were not all uniform.

PointsPlus are not too bad. Last time, I calculated 18 for 1/2 recipe so 2/3*18=12 or 6 each. The filling was rather low with just skim ricotta. Really not bad! And, unlike most stuffed pasta meals, we got a lot!