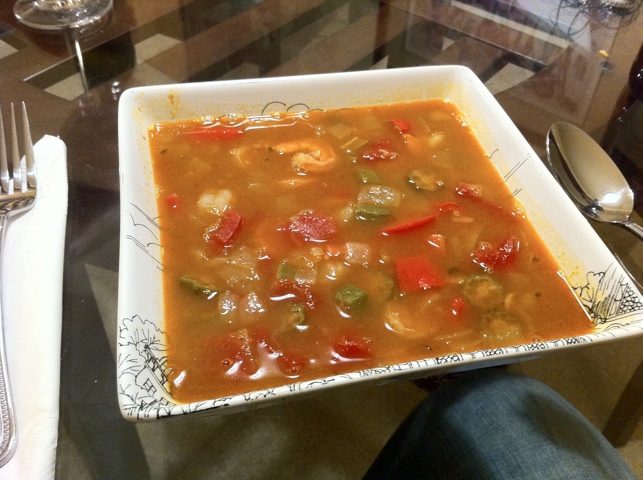 We made shrimp gumbo in honor of Mardi Gras. We used the recipe below as a base only. A lot of the comments suggested adding different things so we followed some of them. We also used less shrimp (becuase there were only two of us). We also added the shrimp at the very end giving it just enough time to cook. When we added the shrimp, we also added some brown rice.

Some of the other additions include some chili powder (as per a review), crushed red pepper,cayennepowder, garlic and onion powders. I didn't think of it until I was eating a lot of it, but I added some Emril Essence. That was a nice flavor addition.

We let it simmer for a while. It was really good. I do not know what the dominant flavor came from but my guess is the okra. I was a bitsurprisedthat it smelled so much like gumbo I remembered. Either way, it was very good and there was a lot for leftovers. My biggest complaint would be that it is salty. Healthy, but salty.

I did something really interesting. I made the roux with olivio instead of oil. Even if we used olive oil, this cut the fat by about 18 grams (14/tablespoon of olive oil vs 5 and it calls for 2 Tbsp).